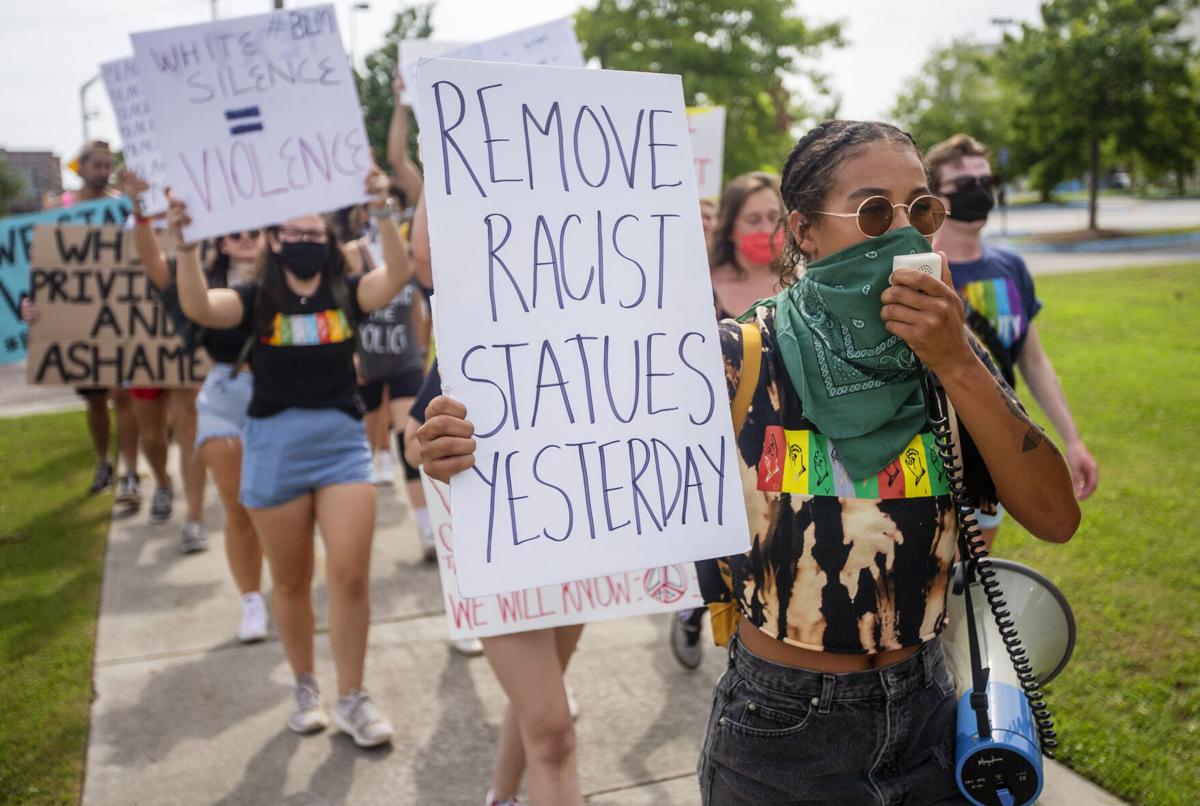 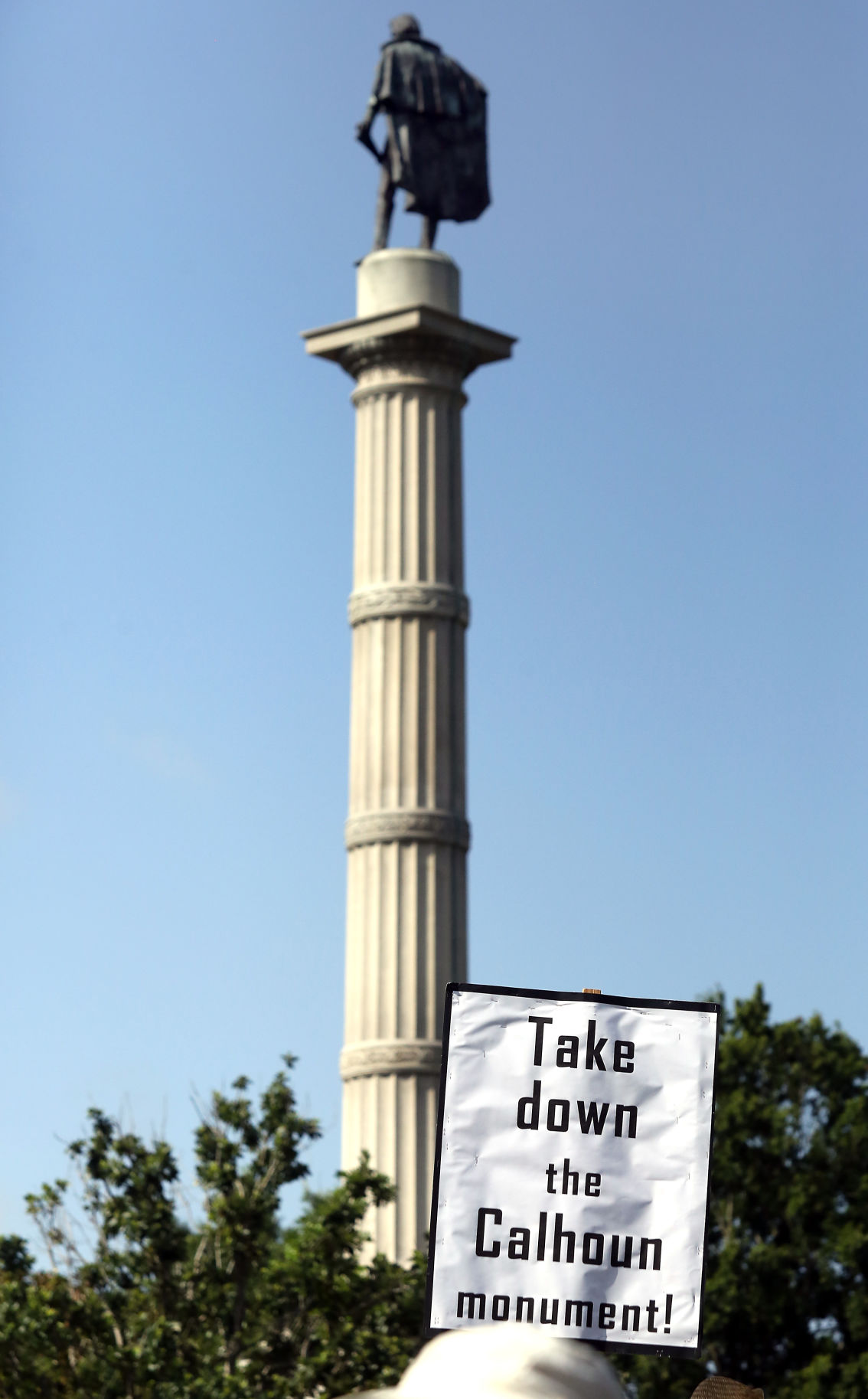 The John C. Calhoun monument stands behind a sign that says to take it down during the Emanuel 9 Rally for Unity held at Marion Square on June 23, 2018. File/Brad Nettles/Staff

In the wake of ongoing protests against systemic racism and police brutality, many activists are looking to tear down physical symbols of past injustices across the country and in South Carolina.

From students to historians and lawyers, many South Carolinians have called for such memorials to be removed and taken from a place of honor to a place of history. But petitions and campaigns, like the one to remove the John C. Calhoun monument from Charleston's Marion Square with nearly 20,000 signatures, are unlikely to meet with any success unless lawmakers decide to act by debating these memorials, or the law protecting them.

Lyric Swinton, a recent University of South Carolina graduate who grew up in Columbia, spent years researching the problematic pasts of several namesakes on the campus.

Sims Hall is named for J. Marion Sims, who became the "Father of Gynecology" by experimenting on enslaved women without anesthesia. There's also a statue of him on Statehouse grounds. It's just one of many memorials marred by racism and misogyny, Swinton said.

As an African American woman, Swinton said she tries to stay unemotional about it, as thinking too much on the buildings' namesakes would be unbearable.

"It really dehumanizes you," Swinton said. "It says, we're going to honor people that went out of their way to make you feel less than human."

She said she hopes a few decades from now, if she has a child attend USC, that child won't see those same names memorialized.

But the ability to change or remove any such memorials belongs to the state, the Legislature decided in 2000.

Named the Heritage Act, the law was part of a compromise that led to the removal of the Confederate battle flag from the Statehouse dome in 2000. It forbids removal from public property of other flags or memorials for any war, historic figure or event without a two-thirds vote of the Legislature. In the 20 years since it was passed, legislators have only taken up a Heritage Act issue twice, most notably when they removed the battle flag from Statehouse grounds in 2015.

That same year, a few residents of Greenwood sued for their right to change a war memorial that listed soldiers separately as "white" and "colored." When a judge ruled in their favor because it was privately owned, the state fought back, saying the ruling endangered the Heritage Act.

The legal fight ended abruptly when someone in the town decided to change the memorial themselves. The case was said to be moot.

So far, that's been the only legal challenge. Other than in Greenwood, memorials have been kept sacred by the Heritage Act.

Charleston lawyer Armand Derfner, who was an attorney for the case, maintains that the Heritage Act is unconstitutional because it restricts debate about speech, and because the provisions of the law cannot be changed or repealed unless a bill receives a two-thirds vote in each branch of the General Assembly.

State Rep. Wendell Gilliard, D-Charleston, said repealing the law is the right thing to do.

"It's appropriate now that we show the world we're willing to take bolder steps toward change," he said. "Far too many times in the South, we tend to change through tragedy."

Gilliard has tried many times to get the John C. Calhoun monument, erected in 1896 in Marion Square, moved to a museum. On Tuesday, he called again for it to be moved.

"Calhoun was the owner of enslaved people, and he saw my ancestors as property," Gilliard said in a statement. He pledged to take the issue before the state's House of Representatives when the body reconvenes.

In other states, residents have taken the issue into their own hands, regardless of state law. In Richmond, Va., protesters toppled a statue of Jefferson Davis on Wednesday, one night after they tore down a statue of Christopher Columbus, lit it on fire and pushed it into a lake.

For many historians and activists, the memorials are not of historical value but are instead symbols of racism and oppression.

The majority of Confederate memorials were erected in two periods: the early 1900s during the codification of Jim Crow laws and in the 1950s and 1960s during the civil rights movement. They're still being dedicated today, with around 34 created since 2000, including a few in South Carolina.

According to the Southern Poverty Law Center, about 1,747 publicly sponsored symbols of the Confederacy were still in place as of 2019. The organization's list includes 195 memorials in South Carolina, 13 of which are in Charleston.

Many of the memorials glorify the idea of the "Lost Cause." An Abbeville monument erected in 1906 is inscribed with a poem that reads, in part, “The world shall yet decide, in truth’s clear, far-off light, that the soldiers who wore the gray, and died with Lee, were in the right.”

For historian Adam Domby, memorials to the Confederacy have very little to do with the history of the war. He teaches at the College of Charleston and recently published a book titled "False Cause: Fraud, Fabrication, and White Supremacy in Confederate Memory."

The majority of monuments to the Confederacy weren't built until decades after the war ended, Domby said, and they began to gain favor in the 1890s when African Americans were being disenfranchised.

One example, he said, is the Wade Hampton monument in Marion Square. A speech given by a historian at the dedication mentioned Hampton's Confederate service and his victory in the gubernatorial election in 1876, effectively ending Reconstruction.

Rather than destroying history, getting rid of such monuments could present a more accurate historical view, he said. "Southern history is not the history of the Confederacy only. It should include African Americans, women, people who fought against the Confederacy, Native Americans, immigrants."

But he understands why there's still fervent supports of the memorials.

"White supremacy is a hell of a drug," Domby said.

Domby said the Heritage Act comes from an anti-democratic impulse that takes away control from local governments.

"Communities should be able to decide what they look at every day," he said.

The racially motivated shooting of nine black people at Charleston's Mother Emanuel AME Church in 2015 led to a wave of monuments being taken down in other states. Since the shooting, 138 symbols of the Confederacy have been removed, including 58 monuments, said one of SPLC's leaders, Lecia Brooks.

Only one of those symbols, the flag removed from Statehouse grounds, was in South Carolina.