A new report shows South Carolina has the nation's second-highest arrest rate for marijuana possession as well as a growing racial disparity in these arrests.

The numbers paint a stark picture, with seven South Carolina counties included in the top 20 nationwide for cannabis arrests, according to the report released Monday by the American Civil Liberties Union, which was based on FBI data.

Black Charleston County residents were 4.2 times more likely to be arrested for the charge compared with whites, according to the report.

Across the state, marijuana possession arrests grew by 52.8 percent from 2010 to 2018, the latest year for which FBI data is available, the report said. Black South Carolinians were charged with the crime 3.5 times more than white residents.

Despite the picture painted by the report, officials in Charleston County said they've been working hard to implement reforms, at least locally.

Law enforcement and criminal justice officials have worked through the county's Criminal Justice Coordinating Council to reduce the inmate population at the Al Cannon Detention Center in North Charleston for several years. Part of that strategy is to issue citations for low-level offenses like simple possession of marijuana, rather than arrest those people and book them into jail.

"Charleston County experienced substantial reductions in jail use for lower-level municipal and magistrate charges," said Kristy Danford, the council's project director. "For instance, in 2014 there were 1,576 single-charge bookings for simple possession of marijuana. By 2019, it reduced by 93 percent to 109."

As a result of the council's reforms, simple possession of marijuana is no longer the most frequent charge in bookings at Charleston County's jail, Danford said.

Charleston Police Chief Luther Reynolds said his focus, and that of his department, is on lowering violent crime.

"I could make 100 arrests for kids hanging out on the corner for simple possession and it'll have minimal impact. Or I could arrest someone who's shooting our communities and it's going to have a huge positive impact," Reynolds said. "We have to be strategic and we have to be in the areas where we have problems."

The chief said officers have been issuing citations for simple possession rather than arresting those individuals when appropriate.

"It's a difficult, challenging conversation," Reynolds said. "We should be in those communities where there's drug dealing associated with violent crime. But who should we be arresting?"

The chief said he has directed his officers to not arrest people for simple possession, even during drug sweeps like one that occurred in Charleston's East Side neighborhood earlier this year. The priority in such narcotics operations is to arrest dealers and people engaging in violence, not low-level offenders.

"We intentionally don't go sweep up (everyone)," Reynolds said. "The whole idea is to build trust. If we go and arrest everybody, we've destroyed trust. You're going to have underreporting of crime and the police cannot make a community safe."

According to the ACLU's report, other areas of the state were struggling with racial disparities in marijuana arrests far more than Charleston County.

In Pickens County, black residents were 8.4 times more likely than white residents to be arrested on the charge, according to the report. Nearby Oconee County had a disparity rate blacks being arrested 8.3 times more than whites.

In Lexington County, that rate was 5.8 times, and in Horry County is was 6.8 times.

Of the ACLU's list of 20 U.S. counties with the highest per capita rates of marijuana possession arrests: Chester County took the top spot with just over 2,000 per 100,000 residents. Newberry and Darlington counties were third- and fifth-highest in the nation. Marion, Laurens, Kershaw and Colleton counties were also included in the top 20.

Nationally, law enforcement made more than 6 million arrests between 2010 and 2018 and black people are more likely to be arrested for marijuana possession than white people in every state, including those that have legalized marijuana, according to the report.

"This report finds that stark racial disparities in marijuana possession arrests have remained unchanged nationwide," the ACLU concluded. "On average, a black person is 3.64 times more likely to be arrested for marijuana possession than a white person, even though black and white people use marijuana at similar rates."

Regardless of what one thinks about marijuana, all people should be concerned over the racial inequities shown in the report, Knaack said.

"Our marijuana laws have been justified using words like 'tough on crime,'" he said. "It’s time for us to look at our public safety system and build it around justice, fairness and equity."

Despite efforts in some areas to reduce the number of people arrested and jailed for marijuana possession too many people are being swept up into the criminal justice system because of the nation's prohibition on cannabis, Knaack said. 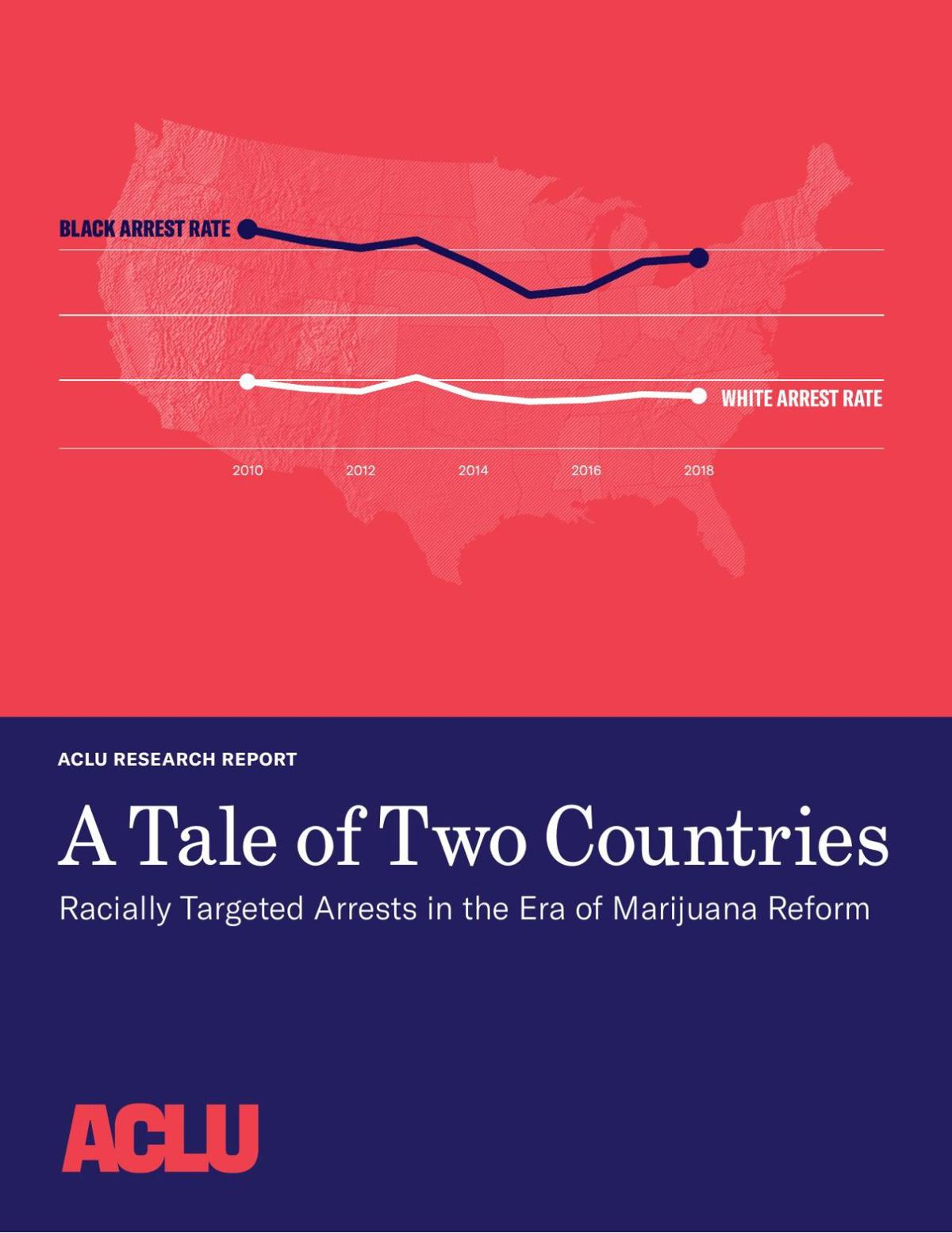