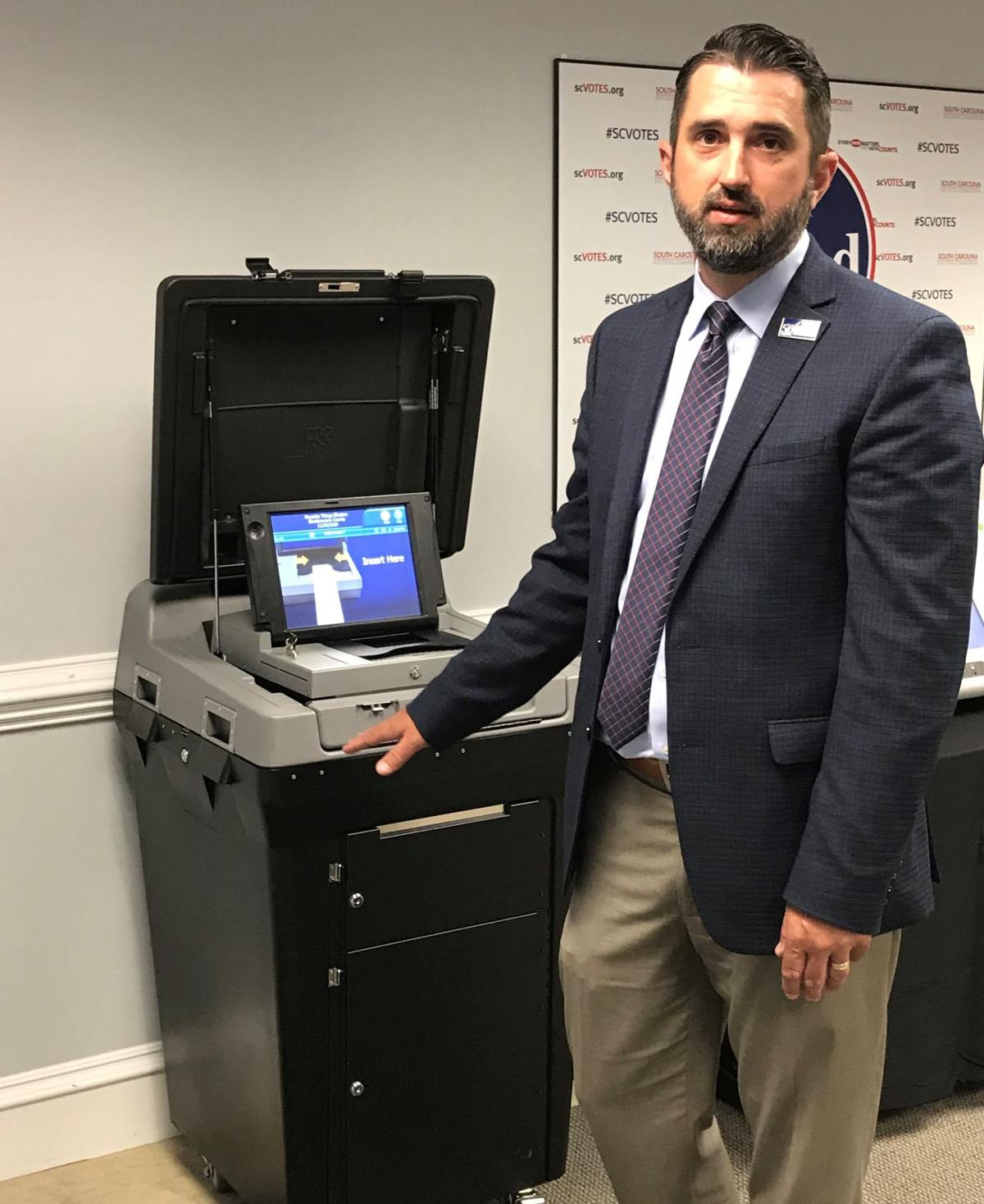 Chris Whitmire, spokesman for the SC Election Commission, demonstrates the new type of scanner that will read paper ballots from voters and store them in a locked box. Mike Fitts/Staff 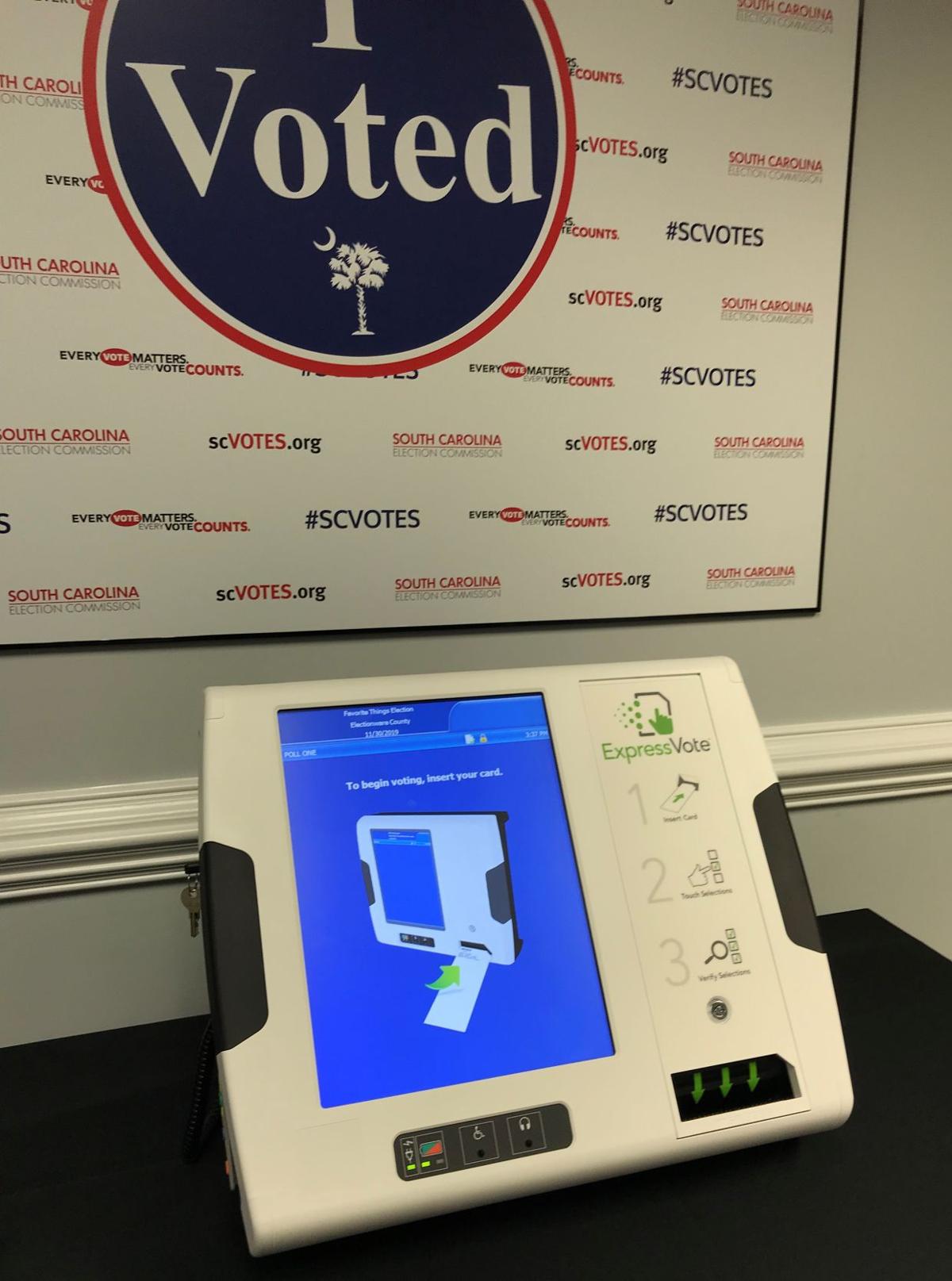 One of the new touchscreen devices for marking paper ballots on display at the SC Election Commission headquarters in Columbia. Mike Fitts/Staff 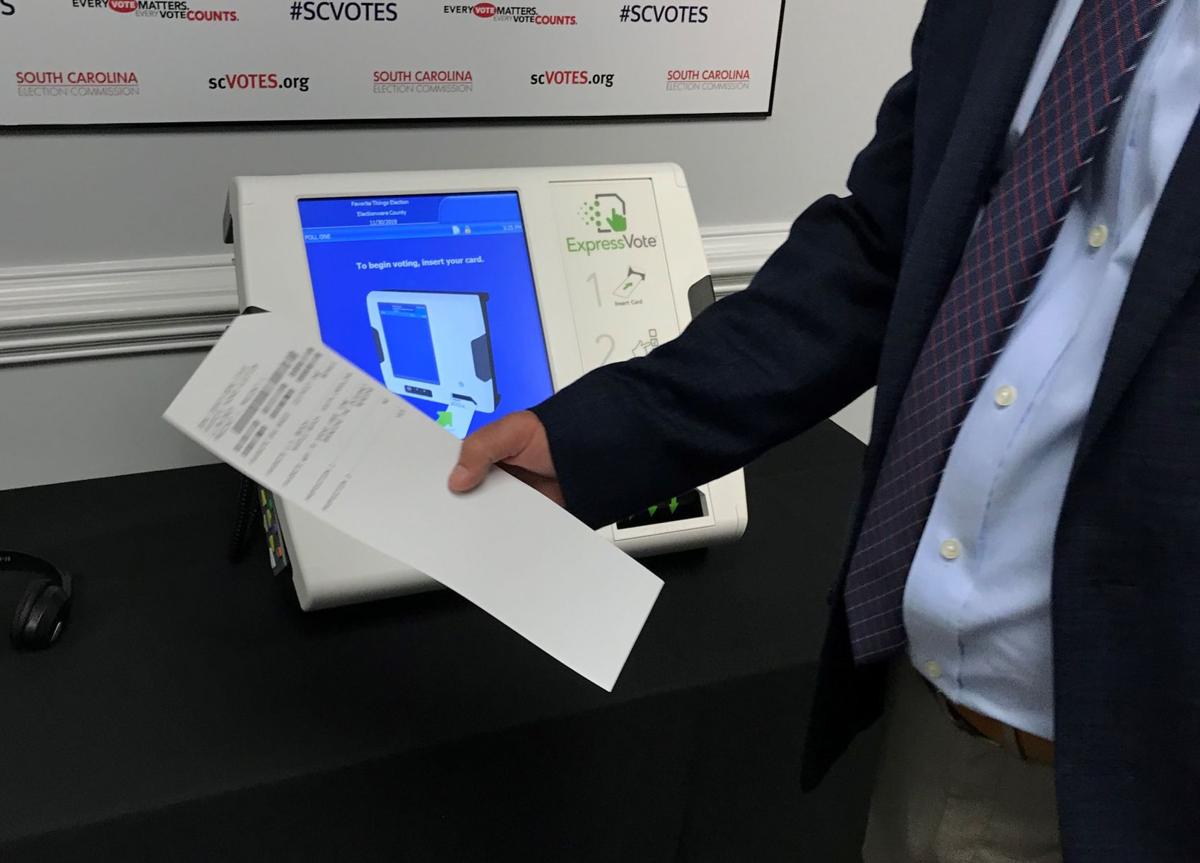 Chris Whitmire, spokesman for the SC Election Commission, shows a demonstration ballot printed by the touchscreen device that will be used on paper ballots. Mike Fitts/Staff

Chris Whitmire, spokesman for the SC Election Commission, demonstrates the new type of scanner that will read paper ballots from voters and store them in a locked box. Mike Fitts/Staff

One of the new touchscreen devices for marking paper ballots on display at the SC Election Commission headquarters in Columbia. Mike Fitts/Staff

Chris Whitmire, spokesman for the SC Election Commission, shows a demonstration ballot printed by the touchscreen device that will be used on paper ballots. Mike Fitts/Staff

COLUMBIA — Beginning with the presidential primary next year, South Carolina voters will mark their choices on paper ballots by touching digital screens under a new $51 million voting system announced Monday by the state Election Commission — a choice criticized by a civic group that advocates for safe balloting.

Under the system made by Election Systems & Software, voters will put their paper ballot into a touchscreen system and choose their candidates. They print out a completed ballot to review their selections and then put the ballot into a scanner to formally record their votes.

The paper ballots will be kept in a locked box where can be used to verify results.

Using this system of more than 13,000 new machines should produce a verifiable paper trail while also avoiding the issues of stray or misleading ballot marks from written ballots, said John Wells, chairman of the State Election Commission.

"There can be no question as to the accuracy of the election," he said.

The League of Women Voters of South Carolina, however, was disappointed in the choice. The group sees this system as overly elaborate and possibly vulnerable to hacking or other mischief, especially when compared with a simple paper ballot.

Putting a touchscreen computer into the system adds to the expense and to vulnerability without providing absolute proof of a voter's choices, said Christe McCoy-Lawrence, co-president of the state League of Women Voters.

"We think it was a mistake," she said. "Putting a computer between the voter and his ballot is not necessary."

Election officials across South Carolina will be able to use the paper ballots in case of a recount and to periodically verify the digital count of a precinct's results, state Election Director Marci Andino said.

Paper ballots even will be scanned and posted for review online in the wake of an election, the agency said.

The balloting and tabulating machines themselves will not be connected to the internet, Wells said. The members of the commission were advised by security officials both from state government and a private consulting group, Soteria of Charleston. County election officials, who run balloting during elections, also were heavily involved in the selection process, Wells said.

The ES&S' ExpressVote system was chosen from among three finalists whose systems had passed two sets of field tests conducted by outside auditors at the request of the state's board. Some local elections late in 2019 will be conducted on the system, which should be fully in place for the 2020 Democratic primary Feb. 29.

The new system, which has more than 44,000 machines deployed nationwide, will remove South Carolina from the shrinking list of states that provide no paper ballot to voters. Just three states remain, according to a report from the Brennan Center for Justice policy organization.

Any early use of the ES&S system in Kansas in August prompted problems with very slow reporting of election results, according to published reports. The company was investigating the issues, which it said appeared to be related to hardware issues.

The state Legislature has allocated $40 million in the recently passed budget to cover the cost of replacing the state's voting machines. The balance of the cost will be covered by $9 million that was appropriated earlier and some federal funds, Andino said.

Using any system that includes paper ballots could prompt slower balloting as voters print and review their ballots before casting them, commission spokesman Chris Whitmire said.

"There's not a way to have a paper ballot where it's not going to take a little bit longer," Whitmire said.

Having a touchscreen will make part of the voting process familiar to voters and highly accessible to many voters with vision issues or disabilities, he said. The system also will remind voters about races on the ballot in which they have not voted.

Voters with special concerns, such as those casting a provisional ballot, will be writing on a paper ballot to mark their choices.

ES&S was the vendor for the current system of voting machines in place since 2004. Andino has served on an advisory panel for the company, accepting more than $20,090 in flights and hotel stays as she traveled to its events, according to her state economic statement reports.

She removed herself from that group in 2015 with the state's new spending looming on the horizon. She did attend a 2018 event in Charleston hosted by the company, Andino said.

Her participation in those events has helped keep the state up to date on trends in election systems, Whitmire said. She was not a part of the group that chose the system from ES&S, which was limited to the five members of the state commission. She did participate, however, in the negotiations with the company over the terms of the deal.