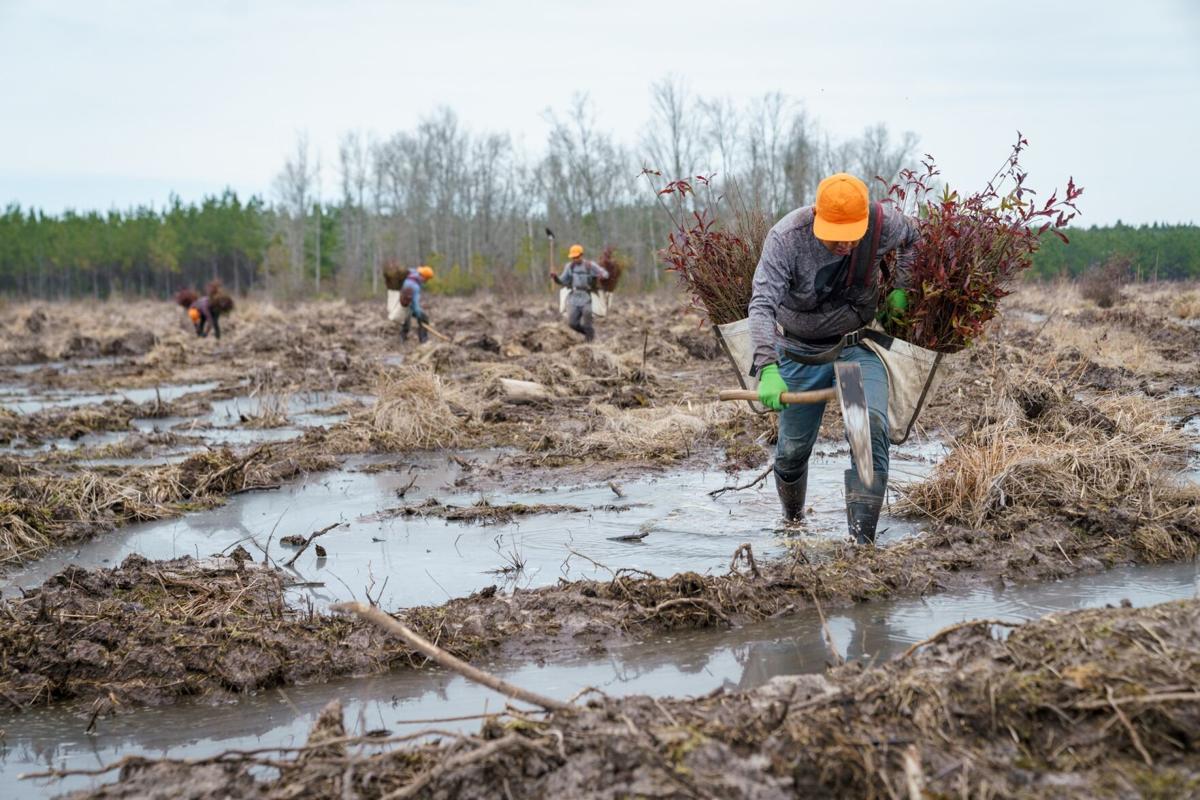 Crews with American Forest Management, a forestry consulting firm, plant hardwood seedlings on more than 150 acres of land in an effort to return that section to wetlands at Camp Hall Commerce Park. Paul Zoeller/Santee Cooper/Provided 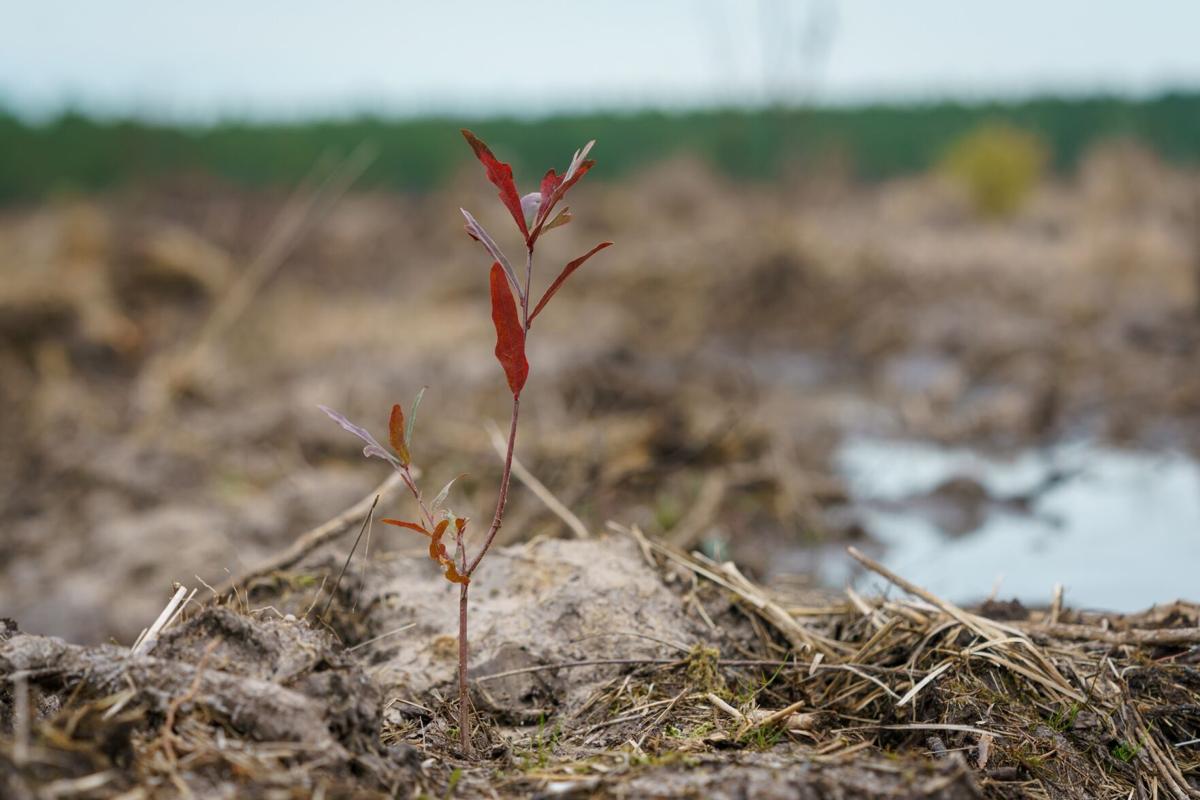 Santee Cooper recently planted 80,000 oak seedlings at the Camp Hall Commerce Park with an additional 160,000 seedlings scheduled to be planted on the property over the next two years. Paul Zoeller/Santee Cooper/Provided 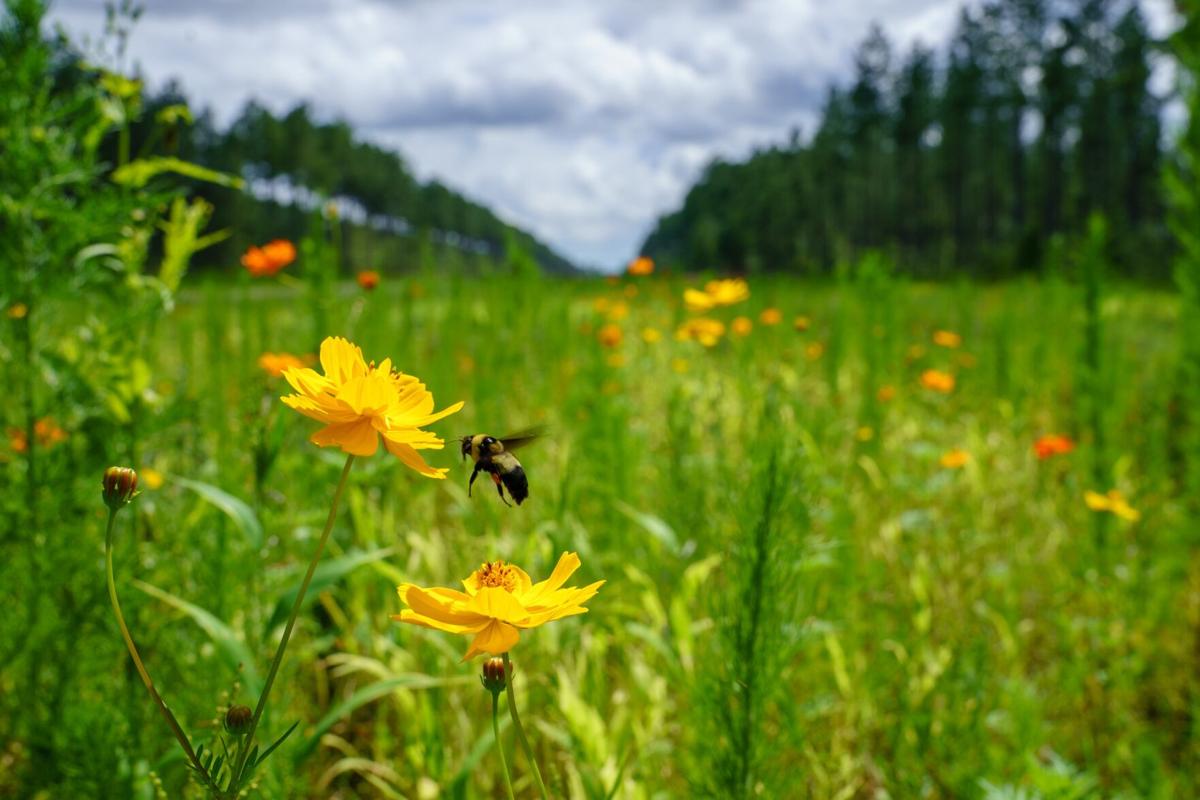 Native vegetation planted along the Pollinator Pathway at Camp Hall creates a habitat for bees to thrive. Paul Zoeller/Santee Cooper/Provided

RIDGEVILLE — Santee Cooper recently planted 80,000 oak seedlings at the Camp Hall Commerce Park with an additional 160,000 seedlings scheduled to be planted there over the next two years.

The nearly 250,000 hardwood trees will be part of a 500-acre wetland mitigation and restoration project for the massive 6,800-acre commerce park.

It took a crew of more than a dozen workers three days to plant the initial 80,000 seedlings on the 165-acre tract.

The other approximately 340 acres will be planted over the next two years, said William Johnson, Santee Cooper’s supervisor of Forestry and Undeveloped Lands.

“Within three years, we should have a solid covering of grass and the seedlings will start to emerge above the grass within the next three to four years,” Johnson said.

The Camp Hall complex, which is located just off of Interstate 26, is expected to provide manufacturing and distribution jobs while offering walking trails and a "village center" that will feature retail stores and other amenities workers say they want in a 4,000-acre package next to the Volvo Cars campus.

Santee Cooper — the state-owned electric utility that owns and is developing the park — plans to spend $53.2 million on the amenities. It would recoup that money through future property and energy sales to the businesses that set up shop at Camp Hall.

Santee Cooper is designing the village center — a collection of service businesses such a day care, restaurants, a dry cleaner and bank — that people typically need during work hours.

The utility is marketing the industrial sites and the first was purchased in 2018 by Exeter Property Group, which plans a three-building warehouse and distribution center on 75 acres that will employ 371 people.

Construction has already started on some of the infrastructure, and the first industrial parcel has been sold.

“This is going to be a world-class, next generation commerce park,” said Dan Camp, Santee Cooper’s director of real estate. “We wanted to create a place where people wanted to come and work and having those amenities, which includes a lot of open space, is part of that vision.”

The company plans to have more than 20 miles of multiuse trails that will be carved through the complex.

“The environmental restoration of the Camp Hall area is the right thing to do,” Camp said.

The land had been home to large industrial timber farms before it was purchased by Santee Cooper in 2015. The company plans to restore an additional 365 acres of wetlands, including reestablishment of the headwaters of Timothy Creek, which feeds into the Ashley River.

“It will improve water quality and help with flooding,” Johnson said.

The utility company completed a "Pollinator Pathway" for birds, bees and butterflies in hopes of returning the land to its native origin, erasing the industrial impacts, mainly from tree farming.

“It’s encouraging that Santee Cooper has been able to preserve a lot of freshwater wetlands on the Camp Hall site,” said Robby Maynor, the Berkeley County project manager for the Coastal Conservation League. “They’ve been able to do some restoration work both with wetlands and tree planting and all of that is great. The focus now for Camp Hall is what happens around it. We don’t want to see a lot of heavy development that doesn’t fit with the traditional land uses and could potentially jeopardize some of the historical communities like Lebanon and Sandridge.”

The opening of the new interchange on I-26 last summer gave Camp Hall a boost, providing direct access to the industrial park that eventually aims to employ around 15,000 people.