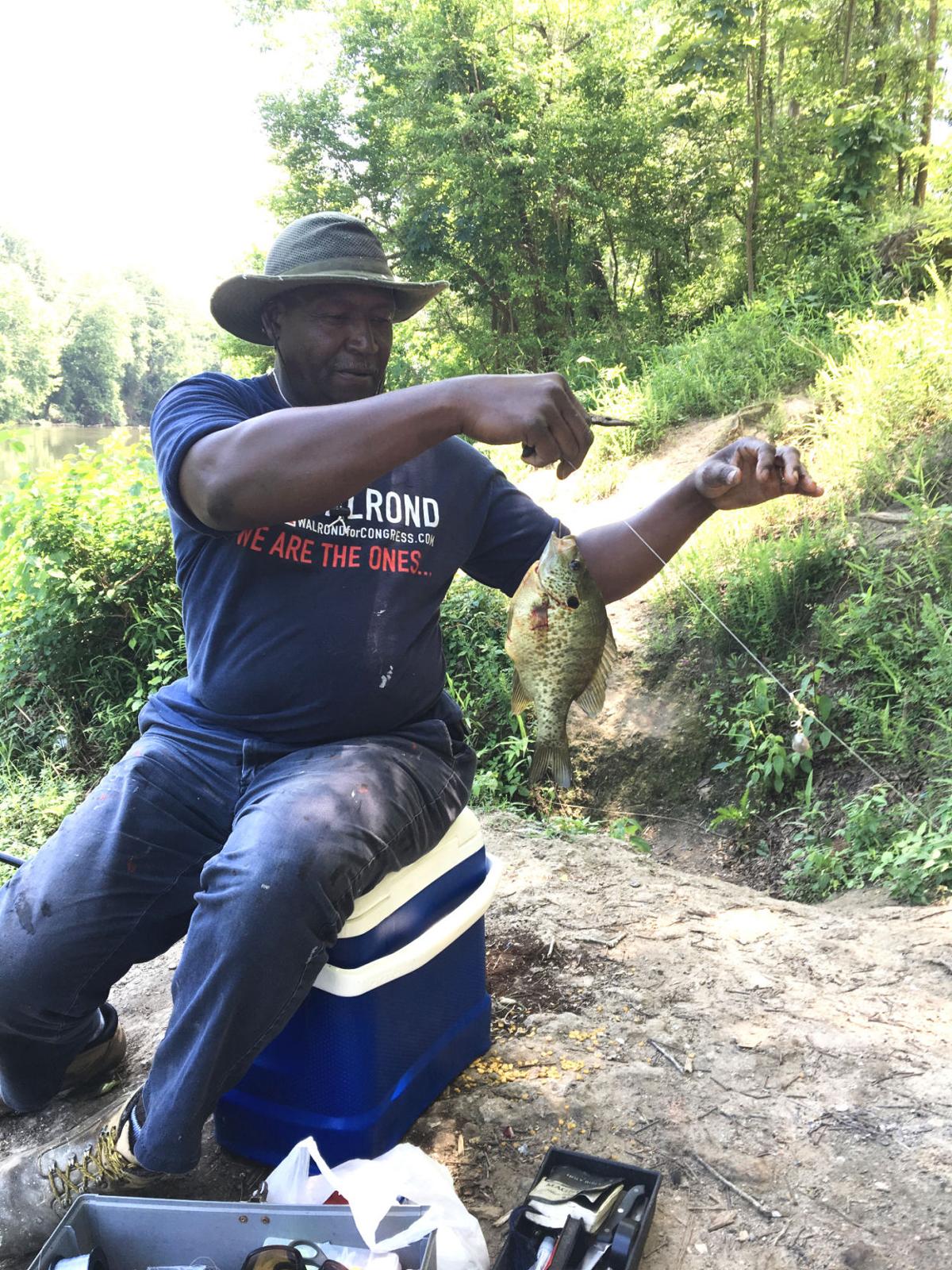 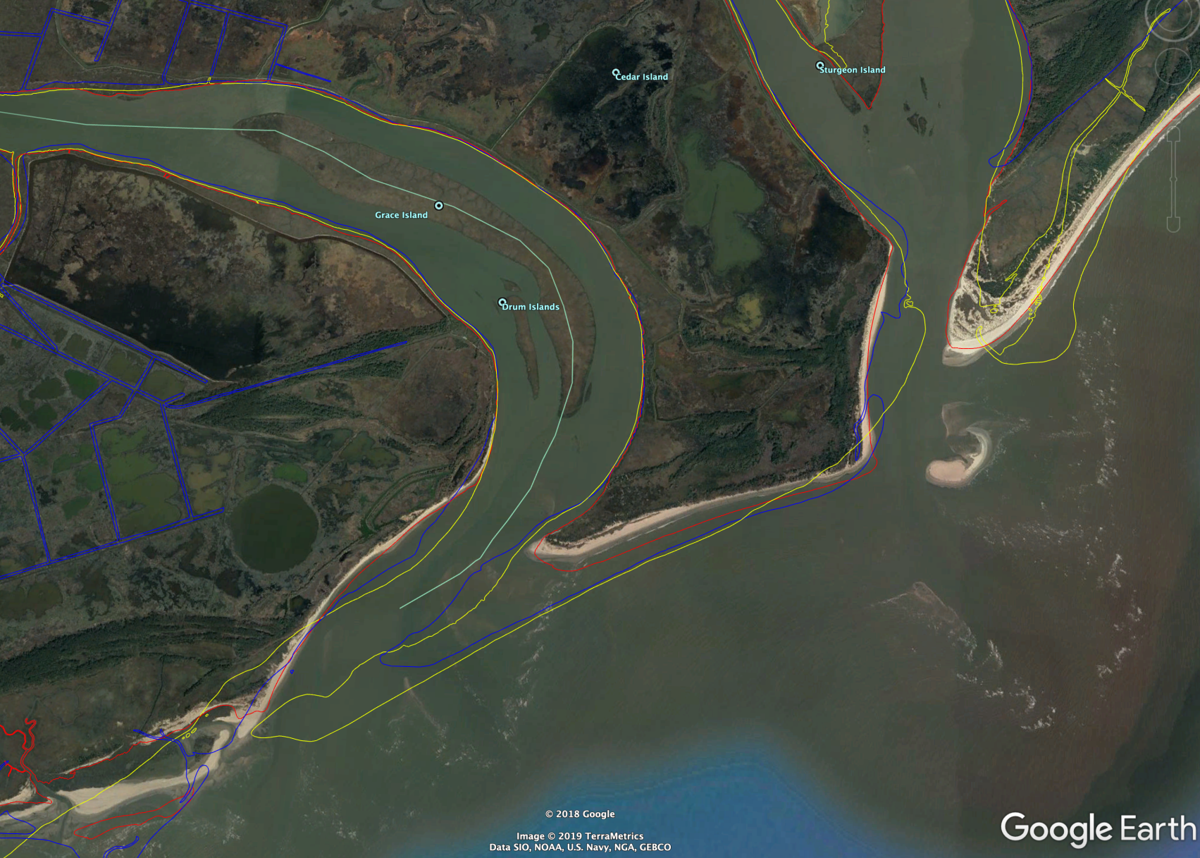 Parts of the Santee Delta washed away after the Santee Cooper dams were built, according to an analysis of Department of Health and Environmental Control data by Chester Jackson, a geologist from Georgia Southern who has been studying changes in South Carolina's coast. Blue lines show what the coast looked like in the 1800s, yellow in the 1930s and red in the 2000s. Provided 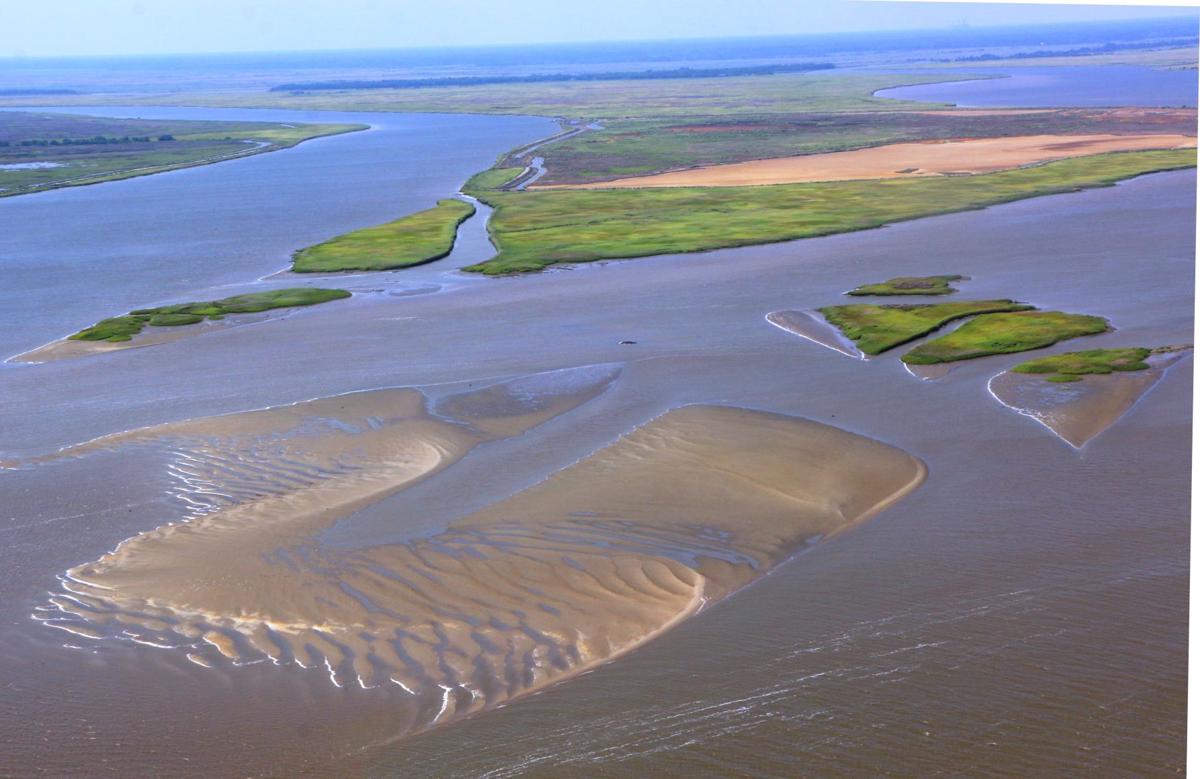 Flying over the Santee Delta, John Adams Hodge, a geologist and attorney, said sand is mixing with marsh, showing that silt from upriver isn't depositing in the kinds of amounts typical of deltas. John Adams Hodge, Copyright 2019 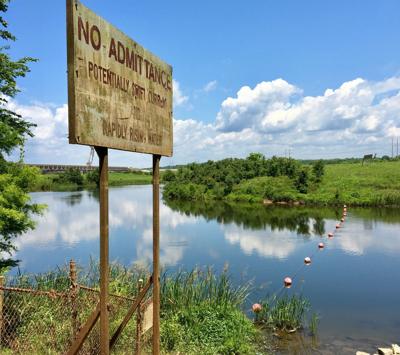 Every year, Santee Cooper’s dams at Lakes Marion and Moultrie steal beach-loads of silt from the Santee Delta, a 77-year theft that continues to starve miles of riverbanks, marshes and barrier islands far downstream.

Before the dams went up in the early 1940s, the Santee pumped an estimated 13 billion pounds of sediment toward the coast, a study found in 2005.

Today, that annual pulse of sediment is about 1.8 billion pounds, an 86 percent drop.

Put another way, that’s enough sediment lost every year to cover roughly 2,000 football fields with a foot of sand.

Because of this loss, waterfront land in the delta has eroded faster than it would otherwise, researchers say. It’s a hidden cost in the form of vanishing property, much of it owned by the public.

This loss is particularly dramatic on Cedar Island, part of the state’s Santee Coastal Reserve. It's a spectacular undeveloped barrier island between the North and South Santee rivers.

But waves have taken one bite after another out of the beach. Erosion has exposed black mud that once was marshland. The ocean has eaten into a forest of large live oaks and pines, exposing roots that once were 4 feet above ground. A new mapping analysis for The Post and Courier by Chester Jackson, a geologist from Georgia Southern University, shows that Cedar Island has lost about a mile and a half of beach since the 1930s.

Maps of lost land, exposed tree roots — both are tangible reminders about how decisions made years ago can cascade through time.

State and federal leaders had talked about damming the Santee River as early as 1914. Advocates then wanted new hydroelectric generators, better flood control and a canal linking the Santee to the Cooper River. Opposition was muted as the idea gained steam. In 1929, The News and Courier opined: "What if waters be 'diverted'? Diverted to what except the Atlantic ocean, and who cares whether they reach it through the present 'lower reaches' or not?"

By 1934, the plan had led to the creation of the S.C. Public Service Authority, better known as Santee Cooper, the names of the two rivers it would soon bottle. About 10,000 workers cut trees, drained swamps and built earthen dams. Water pooled behind the earthen works, triggering a malaria outbreak. Villages and farmland went underwater. Today, the lakes cover about 150,000 acres.

With less freshwater flowing toward the coast, saltwater moved farther inland. Plants that depended on freshwater died. About 50,000 acres of freshwater habitat suddenly became brackish or salt marsh, according to a report in 1947.

"All of these plantations have been invaded by saltwater," William N. Beach, owner of Rice Hope Plantation, wrote federal officials at the time.

With their habitat vanishing, the delta's waterfowl population tumbled, from about 30,000 birds before the dams to fewer than 9,000 in 1946.

The Army Corps of Engineers knew the dams would wreak havoc with the lower delta.

But, according to a report then, the Corps dismissed the problems as merely a "matter of local concern."

John Hodge is a geologist and environmental lawyer in Columbia who studied the delta’s erosion in the 1970s.

As part of that work, Hodge analyzed sediment and found layers of fine red silt, likely from floods that once crashed through the Santee watershed. People on the delta said the river used to "flood red," he said.

With all this sediment flowing toward the coast, the Santee was a classic delta that emptied sediment into the sea, creating a fan-shaped land mass at its mouth.

But the dams slowed this shoal-building process, he said. Instead of building up the edges between land and sea, the delta lost ground.

"The North and South Santee are not functioning like a delta normally does.”

This erosion is mainly confined to the rivers in the delta and nearby barrier islands, said Tim Kana, a prominent coastal geologist who has worked on numerous beach renourishment projects.

In other words, the delta doesn't supply significant amounts of sand to barrier islands south of Cape Romain.

But within the delta system, land and vegetation remain in a precarious state.

Its flow dictated largely by dams, the Santee River begins below the concrete ramparts of Lake Marion, near Wilson's Landing. This area is a popular place to fish. The sounds of spilling water mix with birdsongs.

One afternoon, the river flowed quietly by Eddie Fulton, who sat on a blue-and-white cooler with a rifle propped next to him. Protection against snakes, he said.

Hawks flew by and dove to catch fish. With the dam looming in the distance, the spot was both wild and engineered. Fulton, 59, said he'd been fishing there since he was 9. Sometimes, with the beauty of the nature around him, he said he thinks how "everything is doing what God designed it to do. Except for man. Man causes all the problems."

After the dams went up in 1942, water that once coursed through the Santee now went to the Cooper River. This new injection of water and sediment soon caused Charleston Harbor's shipping channels to fill more quickly. This, in turn, triggered costly dredging projects and calls to turn down the Cooper's sediment spigot.

The Corps' answer was another project, a rediversion of dammed water back into the Santee. Completed in 1985, it restored some of the Santee's freshwater flow and sediment, but not enough to keep the saltwater fully at bay in the delta. As a result, the barrier islands guarding the delta continue to vanish, and saltwater continues to flow inland.

Eric Kreuger, director of science and stewardship for The Nature Conservancy, spent three months in 2005 tromping around the delta to better understand the dams' impacts on vegetation.

During that research, he remembers seeing historical photos of vegetation in the 1940s after the dams went up. Dead and dying vegetation covered the delta.

"It was browned out as far as the eye could see," he said.

Now, saltwater vegetation has moved far inland so that the delta has a unique patchwork quilt of freshwater and saltwater plants.

"Right now, there's an equilibrium between the freshwater and saltwater."

But, he added, that equilibrium is largely in the hands of those who run Santee Cooper.

The federal government requires a license to run the hydroelectric projects for Lakes Marion and Moultrie, and that license has yet to be renewed. The state-owned utility has been asking for one-year extensions since the mid-2000s.

But Santee Cooper's future is increasingly murky thanks to its participation in the failed V.C. Summer nuclear project. This, in turn, has created new currents of uncertainty downstream of its dams.

Last year, a Santee Cooper official told lawmakers that if the state sells the utility, its new buyer could surrender the license, triggering an order to remove the dams. Lawmakers and Gov. Henry McMaster were quick to say they would never get rid of the dams, given all the development around them today.

"They are worth their weight in gold," McMaster said.

But the debate was a reminder how human beings made the lakes and will decide the shape of land and water downstream.

An epic story about power, beauty and how one of SC's last great places faces new threats

The Santee Delta is one of South Carolina's most beautiful, isolated and historically important places. Yet it faces new threats amid rising seas and rain bombs. Political intrigue and power lines could change this place forever. Our Secret Delta takes a deep dive into this special place, exploring its history and characters, as well as things to see and do.