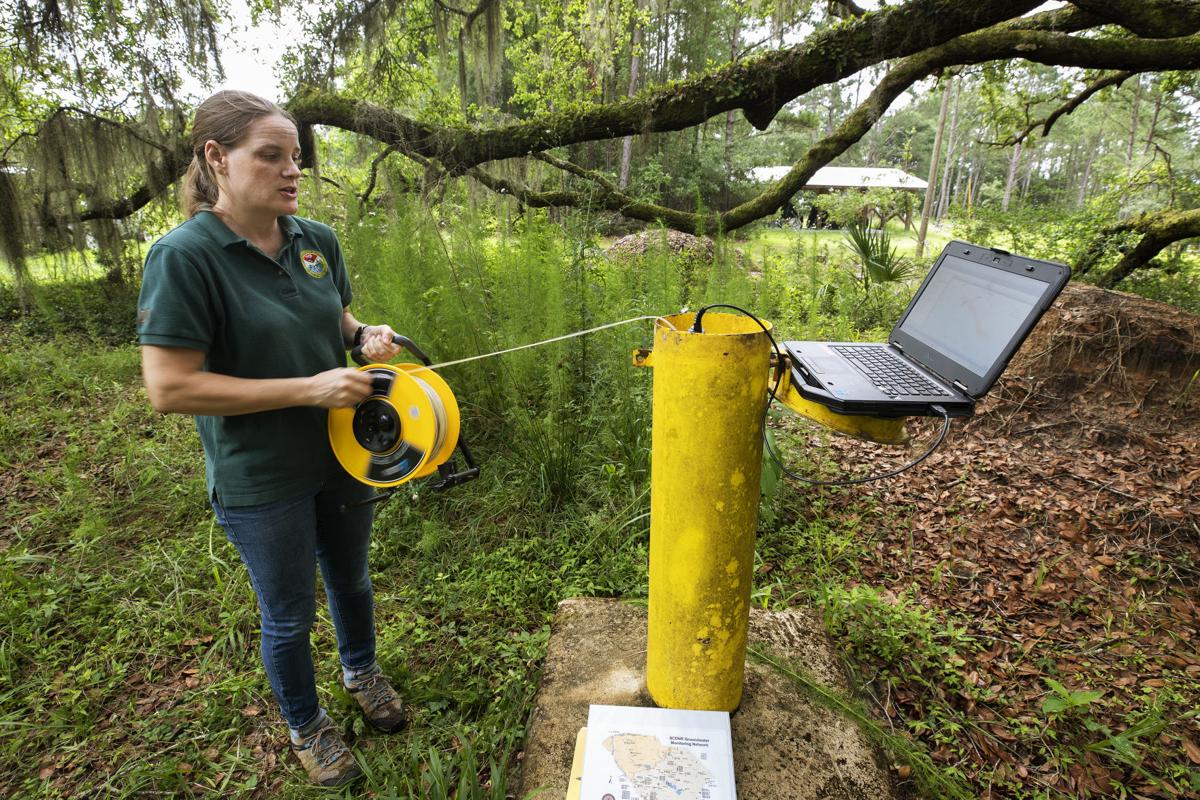 Brooke Czwartacki, a hydrologist with the South Carolina Department of Natural Resources, tests a well for salinity at the College of Charleston Stono River Preserve on Tuesday, June 11, 2019. DNR is monitoring 11 groundwater wells for salinity along the coast from Bluffton to Myrtle Beach. Lauren Petracca/Staff 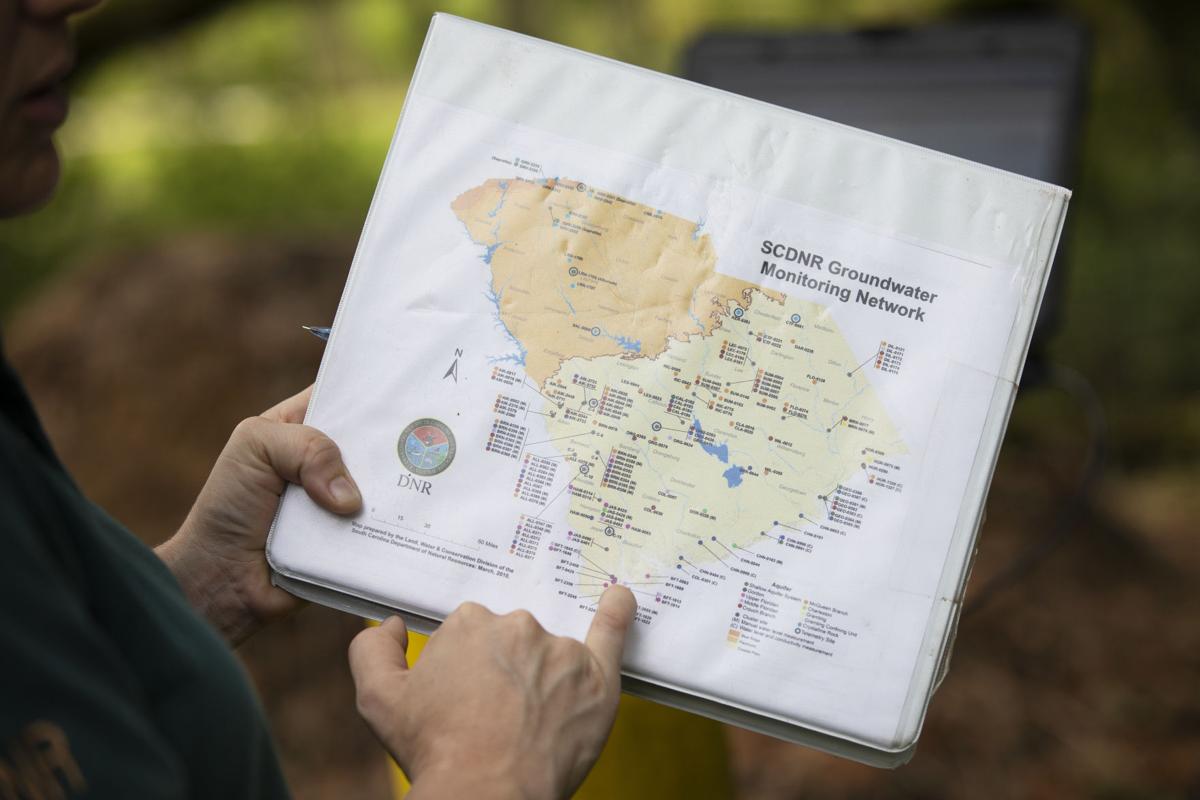 Brooke Czwartacki, a hydrologist with the South Carolina Department of Natural Resources, points to groundwater wells along the coast that are being measured for salinity on Tuesday, June 11, 2019. Lauren Petracca/Staff 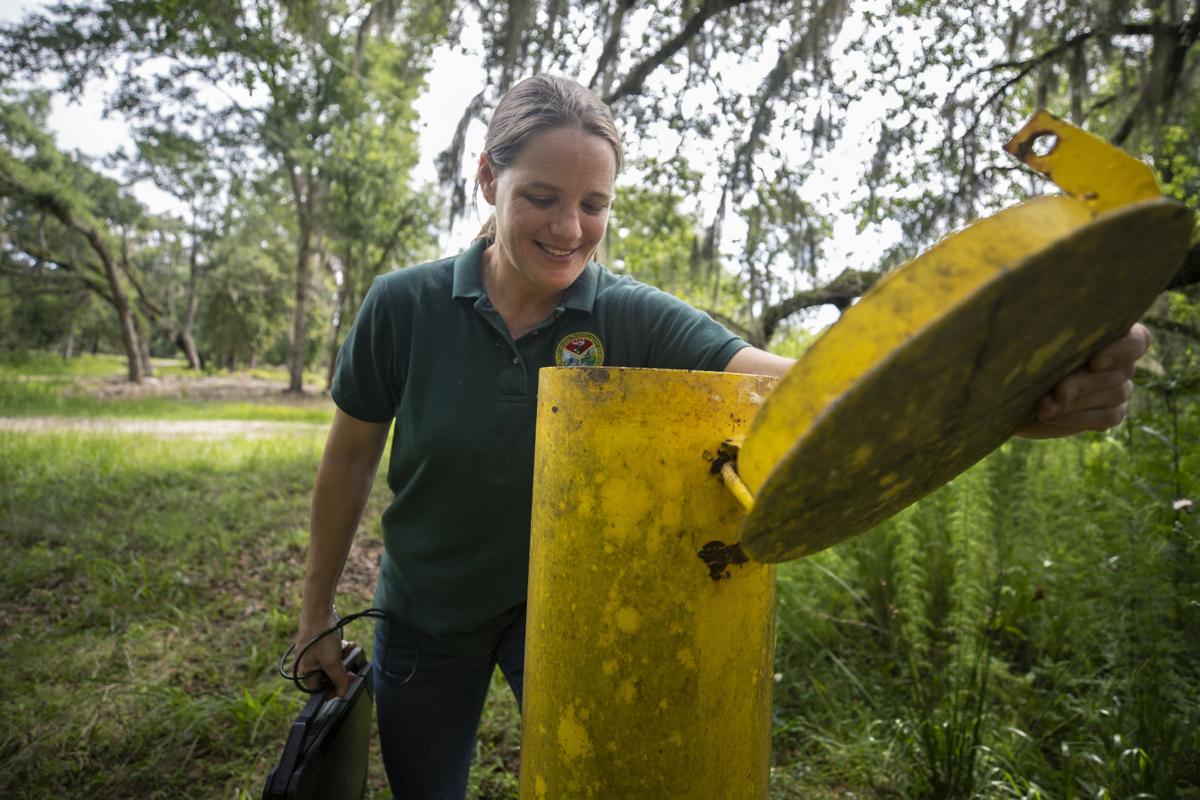 Brooke Czwartacki, a hydrologist with the South Carolina Department of Natural Resources, tests a well for salinity at the College of Charleston Stono River Preserve on Tuesday, June 11, 2019. Lauren Petracca/Staff 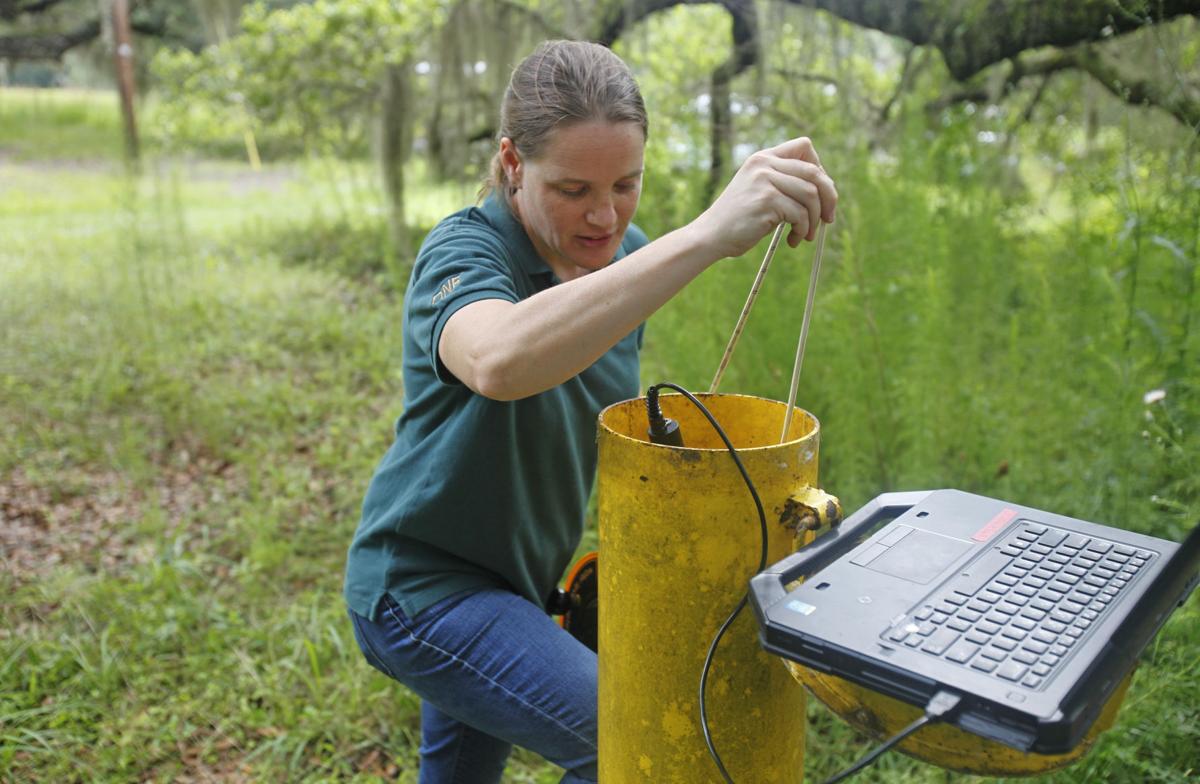 Brooke Czwartacki, hydrologist for the South Carolina of Department of Natural Resources, tests for salinity using a well at the College of Charleston Stono River Preserve on Tuesday, June 11, 2019. 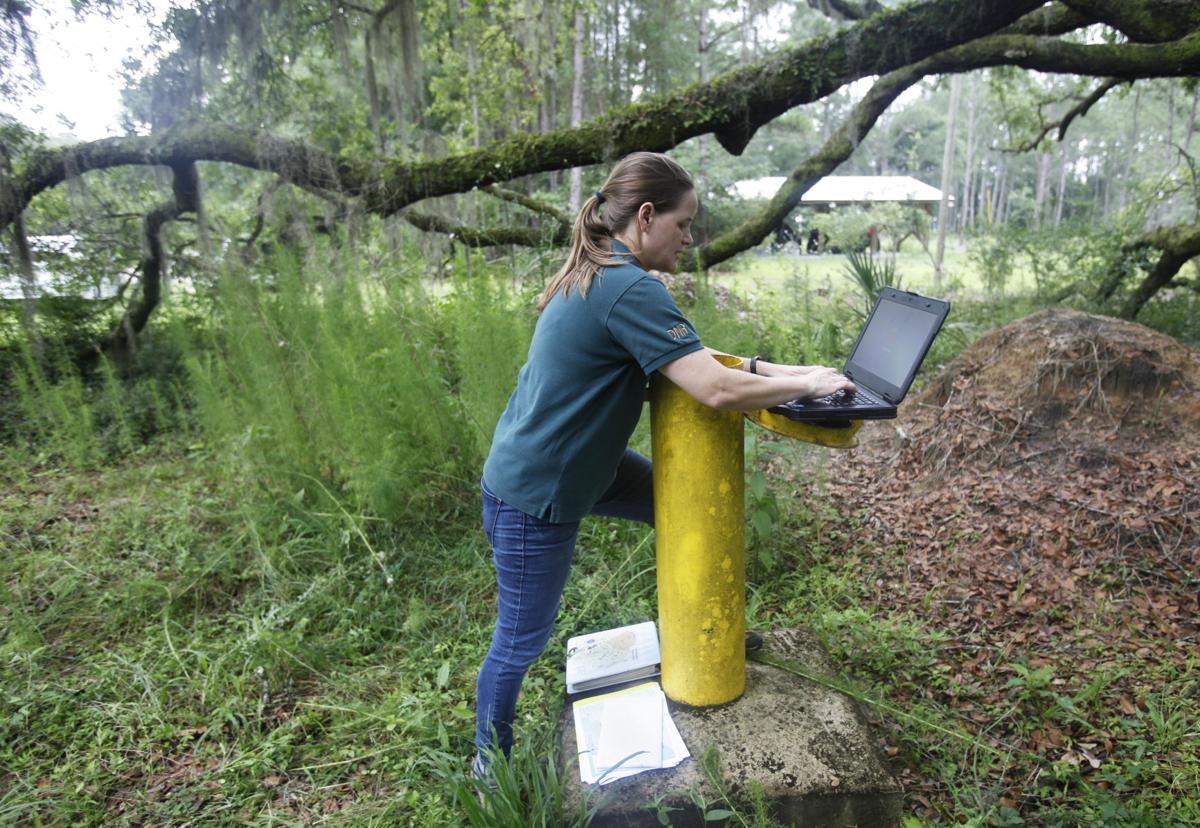 Brooke Czwartacki, a hydrologist for the South Carolina Department of Natural Resources, tests for salinity using a well at the College of Charleston Stono River Preserve. Mary Alston Herres/Staff

Brooke Czwartacki, a hydrologist with the South Carolina Department of Natural Resources, tests a well for salinity at the College of Charleston Stono River Preserve on Tuesday, June 11, 2019. DNR is monitoring 11 groundwater wells for salinity along the coast from Bluffton to Myrtle Beach. Lauren Petracca/Staff

Brooke Czwartacki, a hydrologist with the South Carolina Department of Natural Resources, tests a well for salinity at the College of Charleston Stono River Preserve on Tuesday, June 11, 2019. Lauren Petracca/Staff

Brooke Czwartacki, a hydrologist for the South Carolina Department of Natural Resources, tests for salinity using a well at the College of Charleston Stono River Preserve. Mary Alston Herres/Staff

Salt is inching its way into the groundwater under the coast.

It's one long, slow seep into the freshwater supply in rainy South Carolina, a bounty that was once thought abundant.

Saltwater intrusion doesn't get the attention that the depleting surface water does. It hasn't been as controversial as the groundwater supplies that have people protesting Google's plans to pull more for its Berkeley County data center.

But it's every bit as serious and will be one more costly problem to deal with as demand keeps escalating in a growing population state.

Keeping track of it is the job of one person, the lone coastal hydrologist in the S.C. Department of Natural Resources.

Brooke Czwartacki monitors the water changes in 40 wells in about a dozen coastal and Pee Dee counties, and 11 of those are being watched for saltwater intrusion.

On a recent morning, her computer pulled another set of readings from a 500-foot-deep well at the Stono River Preserve near Hollywood, some 10 miles from the ocean. The salinity test came back at 1.4 parts per thousand. Not much, you'd think. But it takes only .5 parts per thousand to make water saline.

That means enough salt from the ocean has sneaked into the supply that it's considered saltwater.

At the Edisto Beach State Park on the ocean edge, the samples come back 3 parts per thousand — and the aquifer is deeper there. Wells have shown chronic saltwater intrusion as far inland as the coastal U.S. Highway 17 footprint in Charleston and Colleton counties, Czwartacki said.

Because of the way layers of groundwater and seawater flow underground, the potential for saltwater intrusion exists as far inland as Summerville and Walterboro.

"It's something people are a little disconnected from just because they don't see it," Czwartacki said. "We generally think of South Carolina as very water-rich, but only a small percentage of that is freshwater. Saltwater intrusion can mean more treatment, more cost. There's a loss of resource."

Simply put, when the water level goes down in a coastal well, the salinity comes up. Saltwater is filling the aquifers that we draw freshwater from.

Groundwater aquifers are massive, somewhat interconnected layers underground saturated like sponges with water that seeps from the surface over the long-term. They are essentially the reserve tanks for huge spans of land across the Southeast. As they get drawn down, surface water sinks to fill the void.

The layers are separated by mostly impermeable rock layers, but there is leakage.

Most large-scale groundwater users draw from the deepest aquifers. Most domestic users and a lot of farms draw from shallower layers, such as the Gordon layer that Czwartacki was checking at the preserve.

The separation between layers can be so pronounced that the water in the Gordon aquifer seeped from a surface area around Aiken at the Georgia border, with little seepage between there and the coast.

Saltwater intrusion became an issue in South Carolina more than 30 years ago, when it began to infiltrate drinking water wells on Hilton Head Island and surrounding land — a problem eventually solved by piping surface water from the Savannah River.

Then the problem seemed to go away. But it just went underground. One by one, freshwater wells gave out to salt across the lower coast. By 2010, the well water tasted brackish at the ACE Basin National Wildlife Refuge office 15 miles inland from Edisto Beach.

Meanwhile, groundwater, or freshwater, levels are dropping in many of the monitoring wells and never really recovered from the drought 20 years ago, the state says.

The state is starting to grapple with how to coordinate, as well as regulate, usage of groundwater and surface water.

The DNR hydrology section Czwartacki works for will produce a periodic update this year to its findings in the coastal salinity tests. That study will be a big chunk of the data provided to a state river basin advisory council for the coast, one of eight now being assembled by DNR.

The council members' job will be to recommend to the S.C. Legislature new approaches for managing the water in and below those basins. These approaches could include stricter limits for both groundwater and surface withdrawals.

The Legislature created the councils amid two controversies, one involving industrial-scale withdrawals from the Edisto River for an sprawling potato farm, and the other Google's plan to pull millions of gallons from a heavily used aquifer below Charleston.

"Certainly, water management in the state must take into account groundwater, as well as surface water. There will be an emphasis on it," said Scott Harder, the DNR hydrology program manager.

Czwartacki hopes it could lead to drilling more wells, "targeted" to aquifer layers where testing can get a closer read on just where and how fast saltwater is intruding.

The 40-year-old hydrologist frankly admits she has a passion for the resource the rest of us never see. She grew up along the James River in Virginia then studied forestry hydrology at College of Charleston, becoming progressively more fascinated with the workings of how water shapes landscape.

"The background of everything is water," Czwartacki said.

During her monitoring at the Stono preserve, she fed a probe into the well. As the line reaches water, the instrument beeps loudly, like a car alarm.

Czwartacki immediately starts to type information into the attached computer, recording the readings. She is exacting with her work, a requirement for the federal database the information will feed into, as well as for the DNR update the councils will review.

"It's a long-term game, a slow march. There's no smoking gun," Czwartacki said. But "there is a long-term decline in the aquifer."