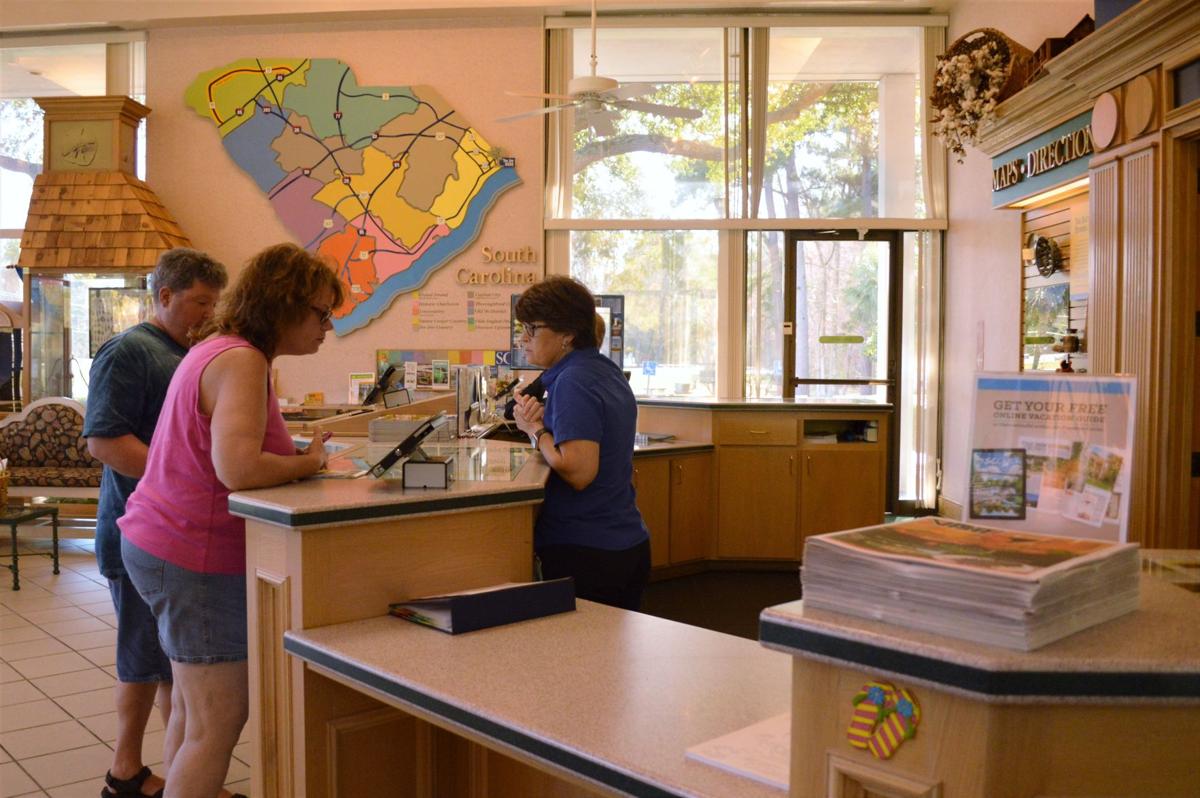 Debbie Causey assists a couple of travelers in a Little River welcome center. Welcome centers are run by the S.C. Department of Parks, Recreation and Tourism, a state agency subject to open records laws. A state Supreme Court case could make private destination promoters such as chambers of commerce subject to the same laws. Chloe Johnson/Staff 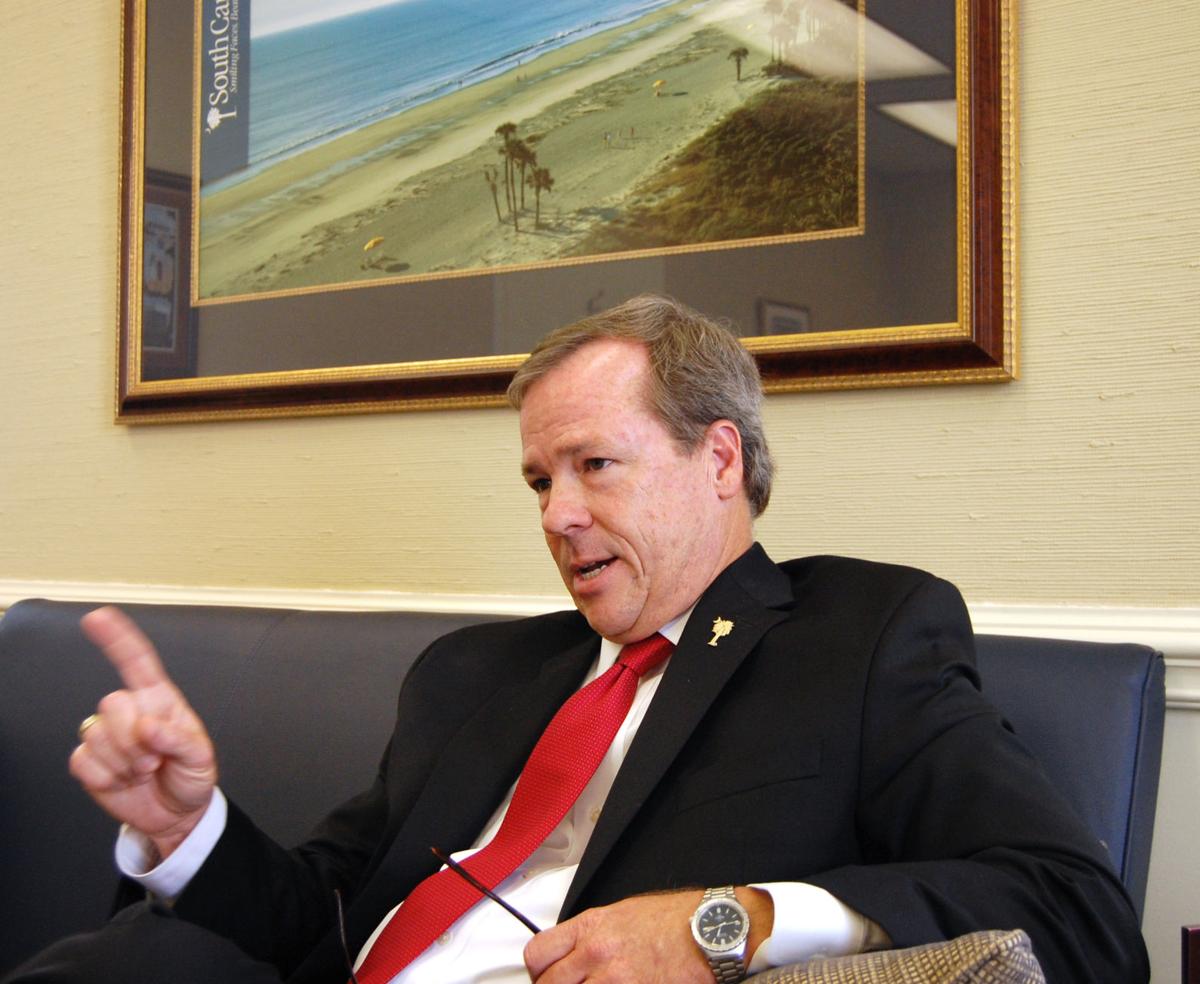 State tourism chief Duane Parrish says destinations that compete with South Carolina for visitors, such as Savannah, "would love to know" how their rivals spend their marketing dollars. File/Staff

Debbie Causey assists a couple of travelers in a Little River welcome center. Welcome centers are run by the S.C. Department of Parks, Recreation and Tourism, a state agency subject to open records laws. A state Supreme Court case could make private destination promoters such as chambers of commerce subject to the same laws. Chloe Johnson/Staff

State tourism chief Duane Parrish says destinations that compete with South Carolina for visitors, such as Savannah, "would love to know" how their rivals spend their marketing dollars. File/Staff

MYRTLE BEACH — Any day now, the ability to trace tax dollars in South Carolina could be curtailed.

Or, some argue, the ability to market the state to tourists could be handicapped.

A decision has been pending for months in a S.C. Supreme Court case concerning whether a private, nonprofit group that receives accommodations tax funds is subject to open records laws. The case arose from a dispute between a businessman and the Hilton Head Island-Bluffton Chamber of Commerce that may seem, at first glance, like a local squabble.

Some tourism promotion organizations argue, however, that broadly applying the state's Freedom of Information Act would impair their ability to do their jobs in the highly competitive space. Open records advocates counter that FOIA is crucial to the public's ability to learn how tax dollars are spent.

At the same time, a bill in the General Assembly could decide the issue in a different way — by exempting at least some publicly supported nonprofits from records requests.

Tina Cundari, an attorney for the chamber, argued before the Supreme Court in October that making the group subject to FOIA would mean "transforming the way they do business, eroding those relationships."

But Bill Rogers, executive director of the S.C. Press Association, said that under the wording of the state's open records law, groups that receive any amount of public support are subject to disclosure. The association has filed a brief in the case in support of applying the act to the chamber.

"My question is, what do they have to hide? Why are they trying to seek an exemption?" Rogers said. "Usually, when there’s smoke, there’s fire, and if they’re trying to put out smoke, there must be a reason for it."

The case stems from a 2013 lawsuit filed by C.C. "Skip" Hoagland. The retired businessman said he requested "total access to the financials" of how the Hilton Head-Bluffton Chamber was spending what's known as "A-tax" funds — public money that local governments can assign to a "destination marketing organization" to help promote the area.

Hoagland said that until that point, public officials took the group at its word as to what it did with the funds. Local governments receive budgets and quarterly reports on how the A-tax money is spent, but Hoagland wanted to see the receipts.

“Everybody just says they trust everybody, but nobody’s seen anything," he said. “Skip Hoagland's the first guy in South Carolina that says I trust you, but I want to see everything.”

The chamber denied his request. Bill Miles, president and chief executive officer of the chamber, said in an email that the group takes transparency seriously.

"We currently have oversight from three public bodies, which includes public hearings, and we account for every public dollar spent," Miles wrote. "We exceed the stringent legal requirements and oversight set forth under the laws governing accommodation tax."

In early 2016, however, Hoagland won his lawsuit, and a judge in Beaufort County ordered that the chamber should be treated like a "public body," meaning it had to disclose documents under the open-records law. The chamber appealed the ruling, putting the trial court's decision on pause as it went before state's highest court.

At the Supreme Court, Cundari argued on the chamber's behalf that the state code requires sufficient disclosures already to the granting authority — in this case, the councils of Beaufort County, Hilton Head Island and Bluffton. She said that a citizen concerned about an item in the chamber's A-tax expenditures could ask a city council about it, and that members of the panel could use their relationship with the chamber to get more detail.

Hoagland said the suggestion that city councils would be able to provide detailed information was "a bunch of baloney."

It's also unlikely that Hoagland, who has become a controversial figure around Beaufort County, would be able to leverage a connection with local officials to get information on the chamber's activities. He's being sued by both Bluffton Mayor Lisa Sulka and Hilton Head Town Councilwoman Kim Likins for defamation.

Hoagland said he's undeterred by lawsuits, and in turn, he's suing both towns — Bluffton for being removed from a public meeting and Hilton Head for trying to prevent him from speaking during Town Council meetings.

In Hilton Head and Myrtle Beach, the functions of a convention and visitors bureau, a nonprofit tourism promoter, is blended into the structure of a chamber of commerce — a membership organization that advocates for local businesses, sometimes by trying to represent their interests in political matters.

For Supreme Court Justice John Cannon Few, that activity complicated the issue of deeming a chamber a public body.

“Maybe it didn't occur to the Legislature ... They would create a situation where private, political activity becomes public as an operation of state law, which has all sorts of legal problems that arise from it," he said during October's arguments.

Taylor Smith, the attorney representing Hoagland, countered in court that the groups receiving public funds chose to organize themselves that way, effectively intermingling public funding and political work under one roof.

The Myrtle Beach Area Chamber of Commerce has filed a legal brief in the case on the side of the Hilton Head-Bluffton Chamber, arguing that nonprofits that receive A-tax funding for destination marketing should not be considered public bodies.

Brad Dean, the president and chief executive officer of the Myrtle Beach chamber, said that an ideal solution would be to have the General Assembly add more specificity to the regulations on A-tax funding.

If someone were to make a request of the organization under the FOIA law, "we would respond that we are not subject to FOIA because we are not a public body," said David Slough, an attorney for the Myrtle Beach chamber.

Experience Columbia SC is not a membership organization and is separate from Columbia's Chamber of Commerce, though some hotels in the area contribute on a voluntary basis. Bill Ellen, the president and CEO, said many stakeholders and businesses ask Experience Columbia for information, though he couldn't recall a specific FOIA request.

"There’s nothing today that we wouldn’t be happy to provide," he said. "We’re pretty transparent in what we do."

He also argued that oversight of A-tax expenditures was well-handled by the Tourism Expenditure Review Committee, a public panel that reviews reporting and how the money is spent.

"We don't believe in this case that we are (a public body), but we have always answered it because we receive public monies, and we don’t have anything to hide," Hill said.

She added, however, that detailed information like the specific ad placements would be damaging to release and give away the "secret sauce" of how the group markets the Charleston area.

The Department of Parks, Recreation and Tourism, as a part of state government, is automatically subject to the act. Director Duane Parrish said he knows how destination marketers spend grants distributed by his agency, but that information can be withheld from records requests because it's considered proprietary.

"Savannah would love to know how Charleston's spending their money," Parrish said.

The potential for FOIA to be broadly applied to any group supported by A-taxes has also raised questions far out of the realm of destination marketers.

Miles said in an email that the Hilton Head-Bluffton chamber will comply with the Supreme Court's final decision, but, "Smaller nonprofits will likely fail under the requirements of being a public body or choose not to receive funds."

Madeleine McGee, president of statewide nonprofit association Together SC, said waiting on the case is difficult for groups around the state.

She wondered, for example, whether some groups that receive public support in subtler ways, like free use of a public facility or other in-kind services, might suddenly be subject to open records requests.

"We have been following this for several years now and watching it, and there is uncertainty," she said. "No one’s comfortable when they’re uncertain about the rules."

Even if the high court rules to permanently broaden the definition of a public body, a new bill could override the decision. State Rep. Bill Herbkersman, R-Beaufort, introduced a measure last year that would require any nonprofit that receives more than $100 in public funds to submit a quarterly report to the source of the money.

The bill has been controversial because it also would exempt the same groups from having to comply with FOIA. Herbkersman said the idea came from smaller nonprofits that might find themselves inundated with records requests, especially if they're at the center of a political controversy, like Planned Parenthood.

He also said he intended to amend the bill to create a threshold after which there were no restrictions on FOIA — for example, requiring any group that receives more than $10,000 to keep complying with records laws.

But Rogers said the idea that the open-records laws are burdensome to some groups was a "smokescreen."

For now, the issue of the bill is likely moot. Herbkersman said that the measure, which has also been introduced in identical form in the Senate, won't come to fruition this year because of the amount of time left in the legislative session.

"If it comes back up, we’ll probably kill it for this year," he said.

Destination marketing organizations in South Carolina get millions of dollars every year in public funding, from grants, accommodations taxes and other sources.

Standing in front of the Coast Guard station in downtown Charleston on Dec. 9, U.S. Sen. Lindsey Graham said he's working on legislation that would return backpay for the more than 8,000 troops discharged over the mandate. Read moreSC Sen. Lindsey Graham says troops kicked out over COVID mandate should receive back pay

Brittney Griner back home in US after Russian prisoner swap

Brittney Griner returned to the United States early Friday, nearly 10 months after the basketball star's detention in Russia made her the most high-profile American jailed abroad and set off a political firestorm. Read moreBrittney Griner back home in US after Russian prisoner swap

"It is a terrible war in Ukraine. It is also a war that can become a full-fledged war that spreads into a major war between NATO and Russia," he said. "We are working on that every day to avoid that." Read moreNATO chief fears Ukraine war could become a wider conflict