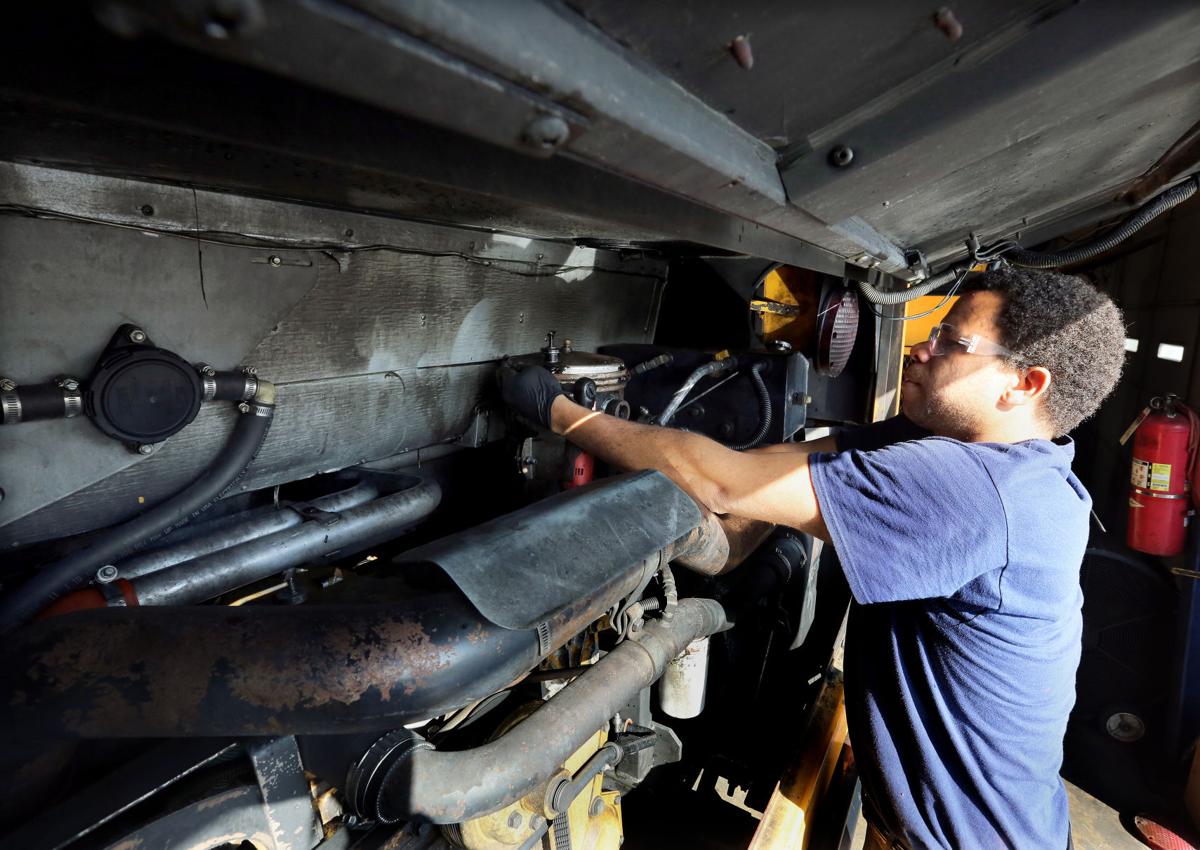 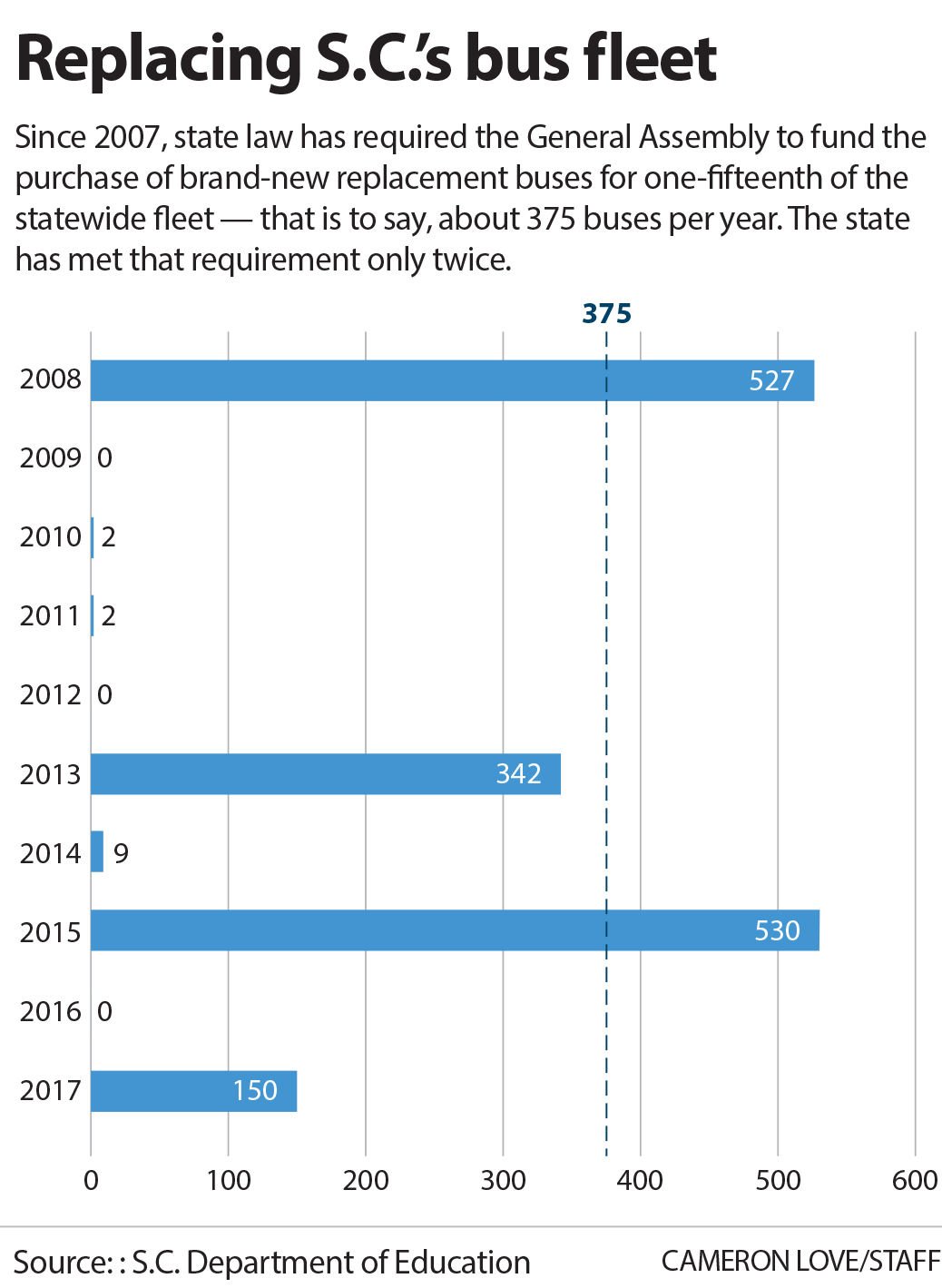 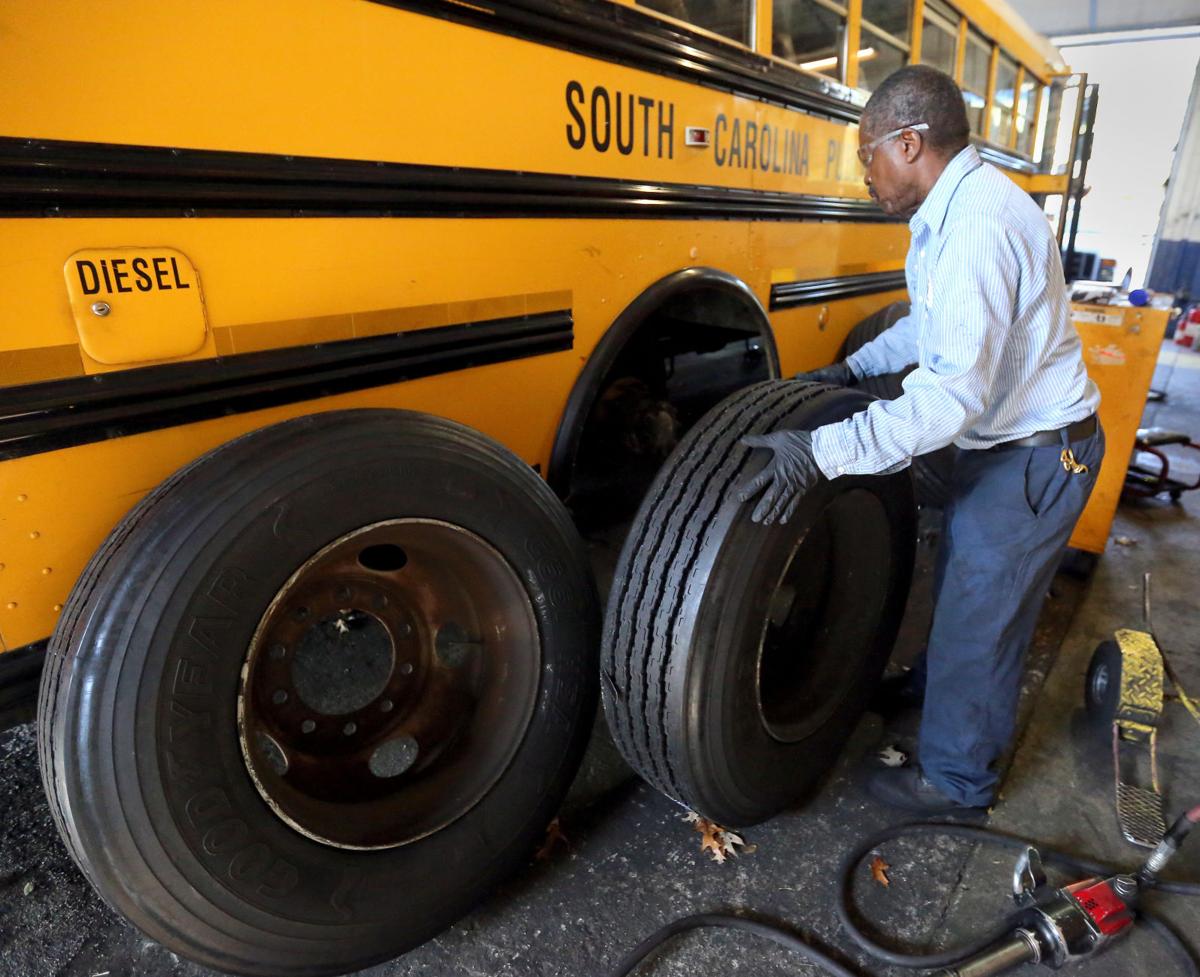 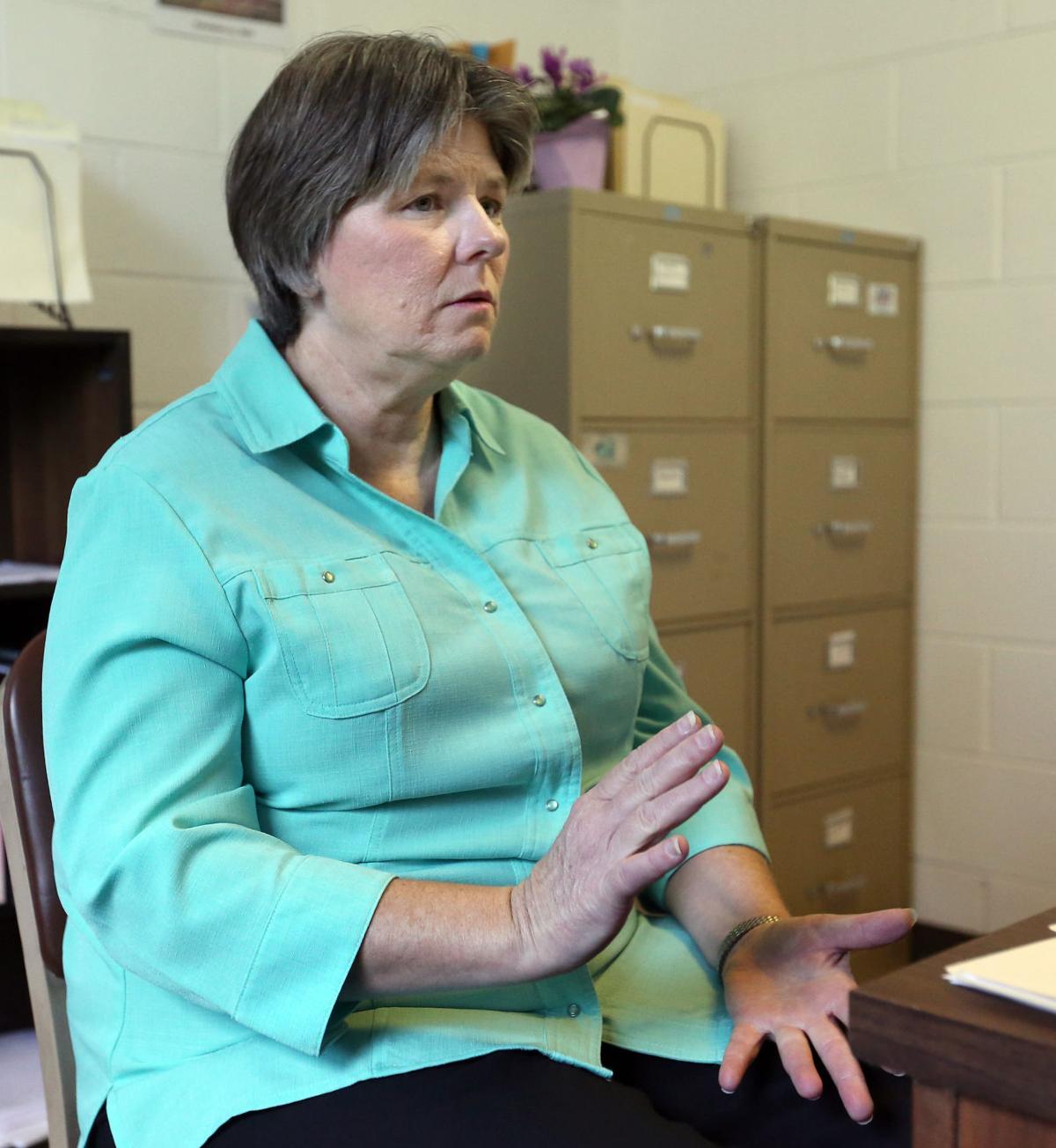 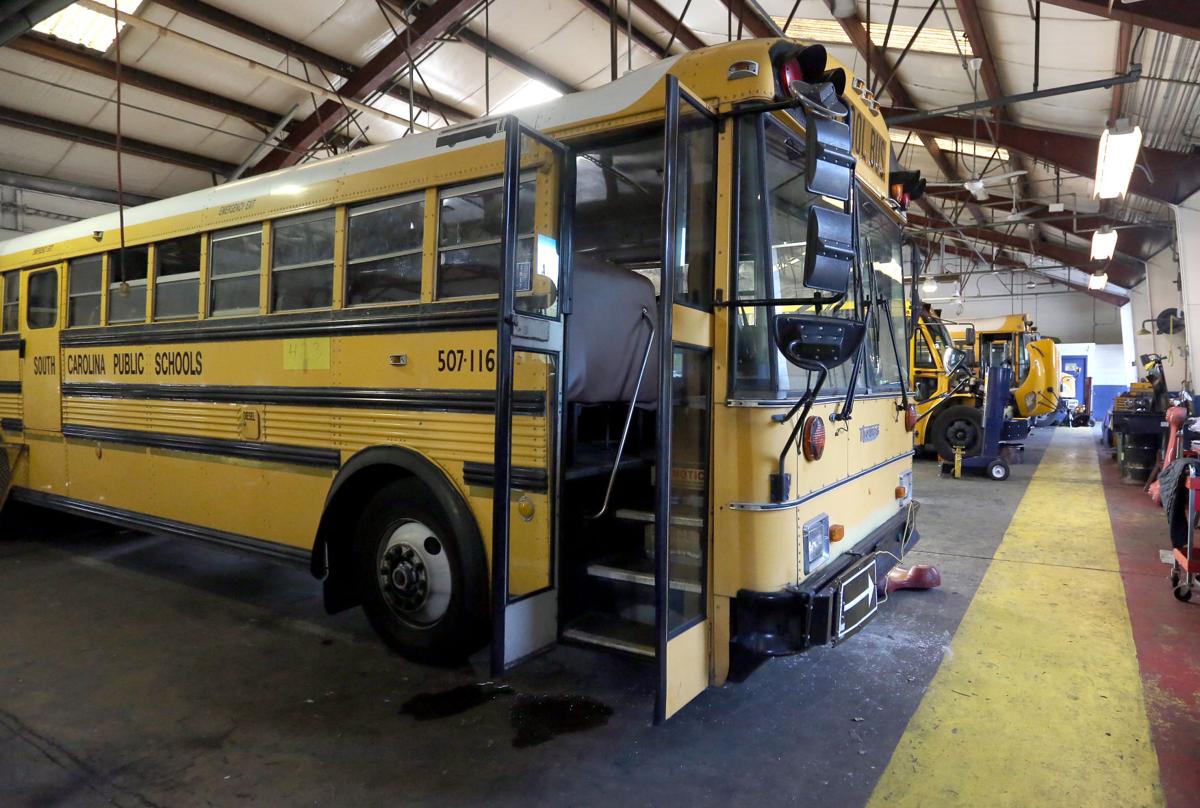 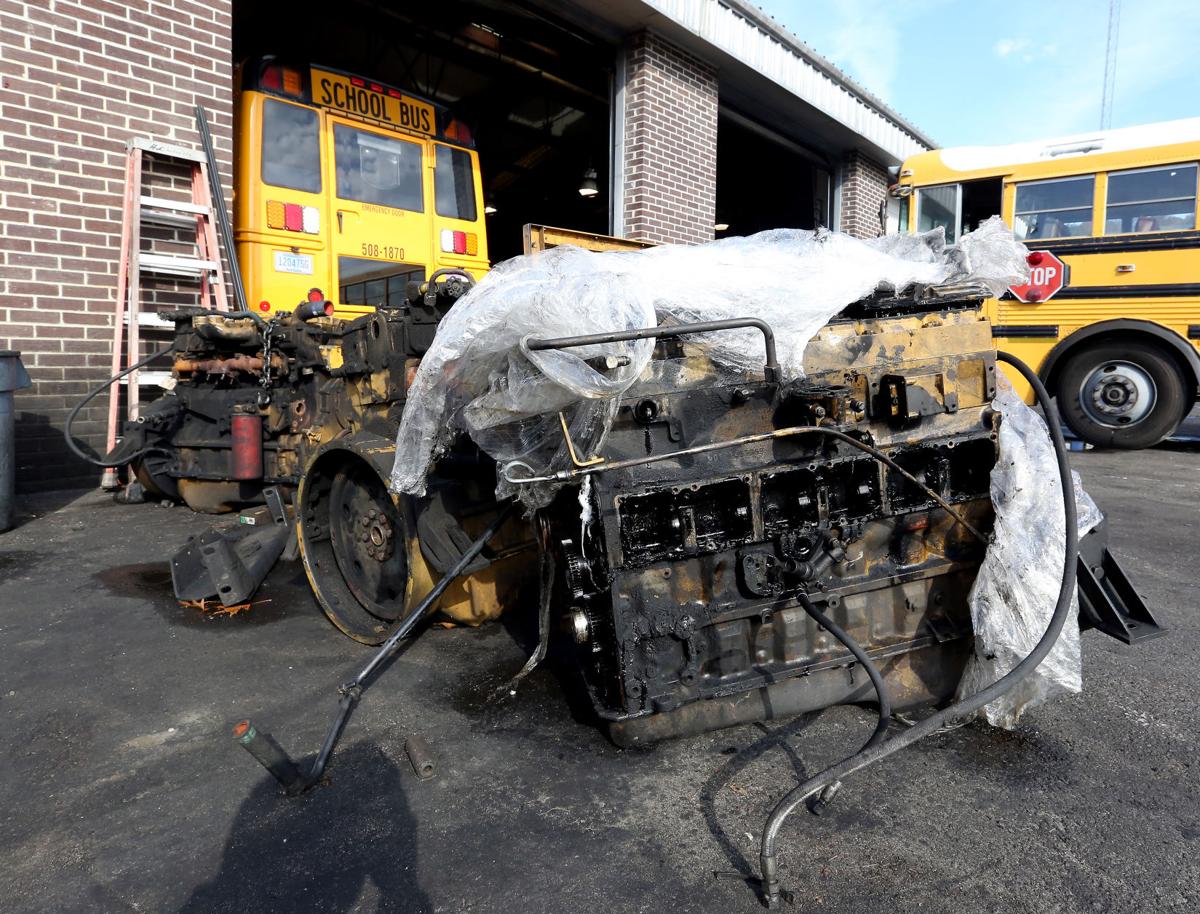 Once a school bus engine reaches 300,000 miles or more mechanics at the South Carolina State school bus repair facility on Von Ohsen Road in Summerville will replace it rather than fix it. Brad Nettles/Staff

Once a school bus engine reaches 300,000 miles or more mechanics at the South Carolina State school bus repair facility on Von Ohsen Road in Summerville will replace it rather than fix it. Brad Nettles/Staff

School buses rust in a row along the treeline, picked to the frame for replacement parts to keep the fleet moving. A Wayne Model 503 is fading from vibrant yellow to powdery off-white, its front end gone except for some limp wires and hoses.

At the state-owned school bus maintenance shop on Von Ohsen Road in Ladson, a 21-year-old Thomas Built bus rolls into the garage for three days of annual maintenance. The bus is on at least its second engine, retrofitted with a crankcase ventilation filter to conform with modern emissions standards.

They can keep it running, and they have to, at the Ladson bus shop as at other state-run garages across South Carolina. Technicians don't have much to work with, but children's safety is at stake.

State lawmakers have failed to adequately fund the purchase of new school buses for years, even by their own standards which they passed into law in 2007. The average odometer reading on a state-owned bus is now more than 236,000 miles. The average age of the buses is 15.5 years, up from 14 years in 2007.

A breakdown on the highway can spell danger for students, and small problems like frayed wires and oil leaks can start fires. A Post and Courier investigation revealed that, of the 100 fire-related incidents on state school buses from 1996 to 2006, the majority took place on 1995 Thomas Built buses — like the one in the repair bay on Von Ohsen Road. The mechanics have their work cut out for them.

"Everything can be repaired," said Willie Hampton, assistant foreman at the Ladson maintenance shop. "If it's made by man, we can fix it."

A 2002 study by the National Association of State Directors of Pupil Transportation Services pegged the useful life span of a South Carolina school bus at eight to 15 years, depending on the type of bus. The association recommended retiring and replacing all school buses on a 15-year or 250,000-mile cycle.

In 2007, a Post and Courier investigation found that the state was carrying students to school on the oldest, most polluting and least safe bus fleet in the nation. At the time, the state had recently bought a passel of used buses from a Kentucky school district that deemed them too old to use.

The S.C. General Assembly passed a law in 2007 requiring the State Board of Education to buy enough new buses every year to replace one-fifteenth of the fleet, or about 375 buses. They had to override a veto of the act from then-Gov. Mark Sanford.

The state has only scraped together enough money to meet the annual bus-purchasing requirement two times since the law passed. For four years in the valley of the Great Recession, as legislators slashed spending across the board, the state froze bus purchases completely, save for four hybrid buses that joined the fleet. (During the same time period, the state also reneged on a promise to fund annual salary increases for its teachers.) The fleet as a whole has actually gotten older since 2007, when the average age was about 14 years.

Meanwhile, some buses sit in maintenance shops for weeks or months as suppliers scour the market for parts that have been out of production since the 1990s or early 2000s. Technicians at the Ladson shop say they generally won't give up on a malfunctioning engine or transmission unless it's past 300,000 miles. On the back lot, three spent engines await the scrap yard.

"They're kind of like our own bodies. They wear out just like we wear out," said Donna Dorn, Georgetown County supervisor for the state bus fleet. "The older a bus is in general, the more potential breakdowns you could have."

It is the only state in the country that owns and maintains the majority of its school bus fleet, rather than delegating that responsibility to local authorities. Theoretically, the state has greater buying power than the school districts and could run a reliable and equitable bus service for every county.

In November 2014, state leaders lost a lawsuit brought by the Abbeville County School District and other rural counties alleging the state had chronically underfunded the education system. Chief Justice Jean Toal wrote in the decision that the state had failed to provide a "minimally adequate" education to students in the affected districts, specifically citing transportation problems as part of a litany of woes.

Critics say education in general, and school transportation in particular, has not been a funding priority in the Palmetto State.

"We have failed these children, and this has not been made a priority by the leadership in either the House or the Senate," said state Sen. Marlon Kimpson, D-Charleston. Kimpson recently proposed that the state use $24 million from a Volkswagen settlement payout to buy 300 new high-efficiency buses — a number that is still not quite enough to fulfill the state's bus replacement promise for a single year. Kimpson's law firm was involved in negotiations regarding the Volkswagen settlement.

As the buses age, students pay the price. Some Charleston County students missed hours of instructional time when buses showed up late or failed to show up at all near the start of the 2015-16 school year. Part of the problem was that school district contractor Durham School Services couldn't find enough drivers to man the wheels. But another factor was a rash of breakdowns on the rickety state fleet.

One week into the school year, 33 buses were out of service at a single North Charleston bus lot, according to a Down Bus Report provided by the Department of Education. Fourteen had to be taken off the road in a single week, while others had sat on the lot all summer long awaiting repairs, parts or replacement engines.

Berkeley County School District Transportation Director Wes Fleming said his district struggled with a bus driver shortage last year as well. Now that staffing is up, he said breakdowns are a more noticeable problem. A simple change in the weather can mean the difference between a bus cranking and not cranking.

Fleming said new buses would be a boon, whether paid for by the Volkswagen settlement or another source.

"Drivers don’t like to drive broken-down buses anymore than kids like to ride on them," Fleming said. "As a director and employer, having new buses is going to improve morale on our end."

Even if the state met its obligation to replace all of its buses over a 15-year period, it would not be keeping up with growth.

Without a legislative mandate for the State Board of Education to plan ahead, the fleet has hovered around its current size of 5,624 buses since 2007. The school system grew by more than 40,000 students during that time period.

Some school districts have picked up the tab for additional buses. Dorchester 2 ordered nine new buses last school year, bringing its total to 44 locally owned buses. The Berkeley County School District maintains its own separate fleet of 58 buses to handle field trips and some shorter routes where the state won't provide transportation. And in Charleston County, about one-third of the fleet is owned by Durham School Services, the school district's transportation contractor.

But for smaller, poorer districts, plunking down $90,000 apiece for new buses is not an option.

Laura Callaway Hart, a Columbia attorney who represented plaintiffs in the Abbeville case, said the state has yet to take action on the transportation failures highlighted by the landmark November 2014 Supreme Court decision.

In sparsely populated school districts like McCormick County, she said some children already face hours-long bus rides in the morning as consolidated schools bring them in from the far reaches of the county. A bus breakdown can mean that, in addition to showing up to school tired, students are showing up late.

The court demanded that the state take action to fix a litany of woes, from teacher quality to early-childhood education access. Hart said she knows it's an enormous project for the state, and one that can't be solved all at once. But when it comes to school buses, she'll believe lawmakers when she sees the money.

"It’s been studied a lot. It was studied last year," Hart said. "But until they enact something, it’s just so much talk."