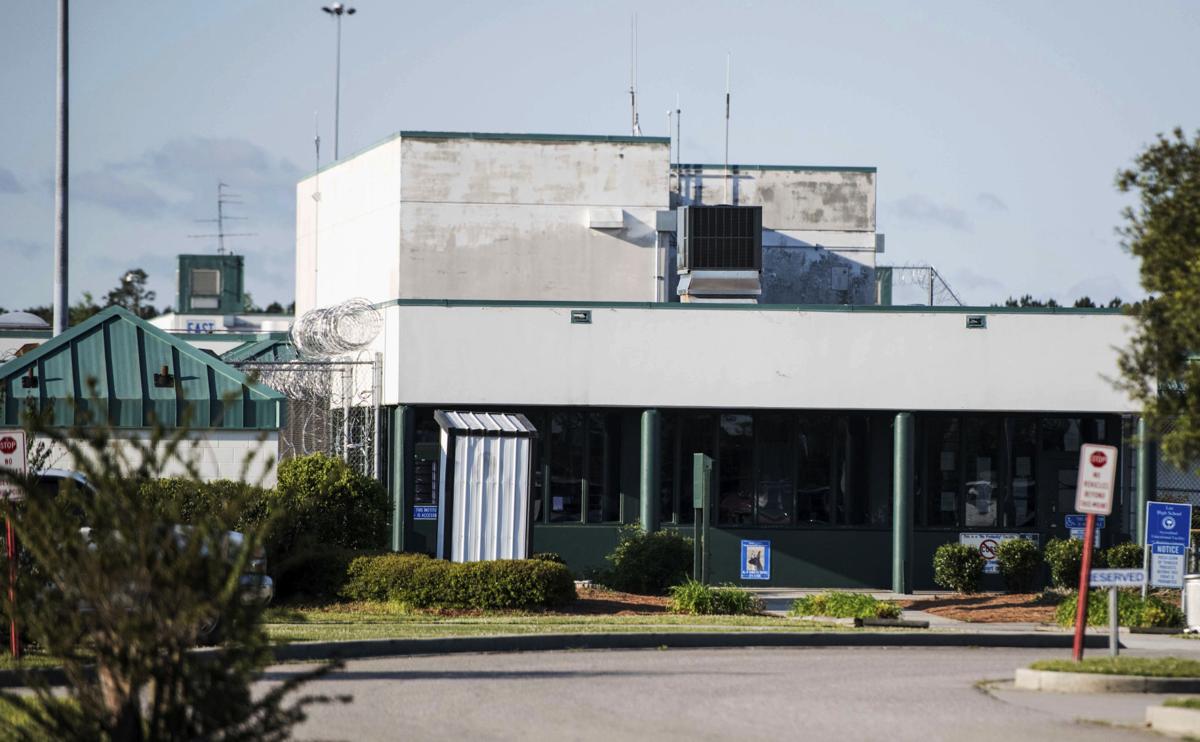 This shows the Lee Correctional Institution on Monday, April 16, 2018, in Bishopville, S.C. Multiple inmates were killed and others seriously injured amid fighting between prisoners inside the maximum security prison in South Carolina. Sean Rayford/AP 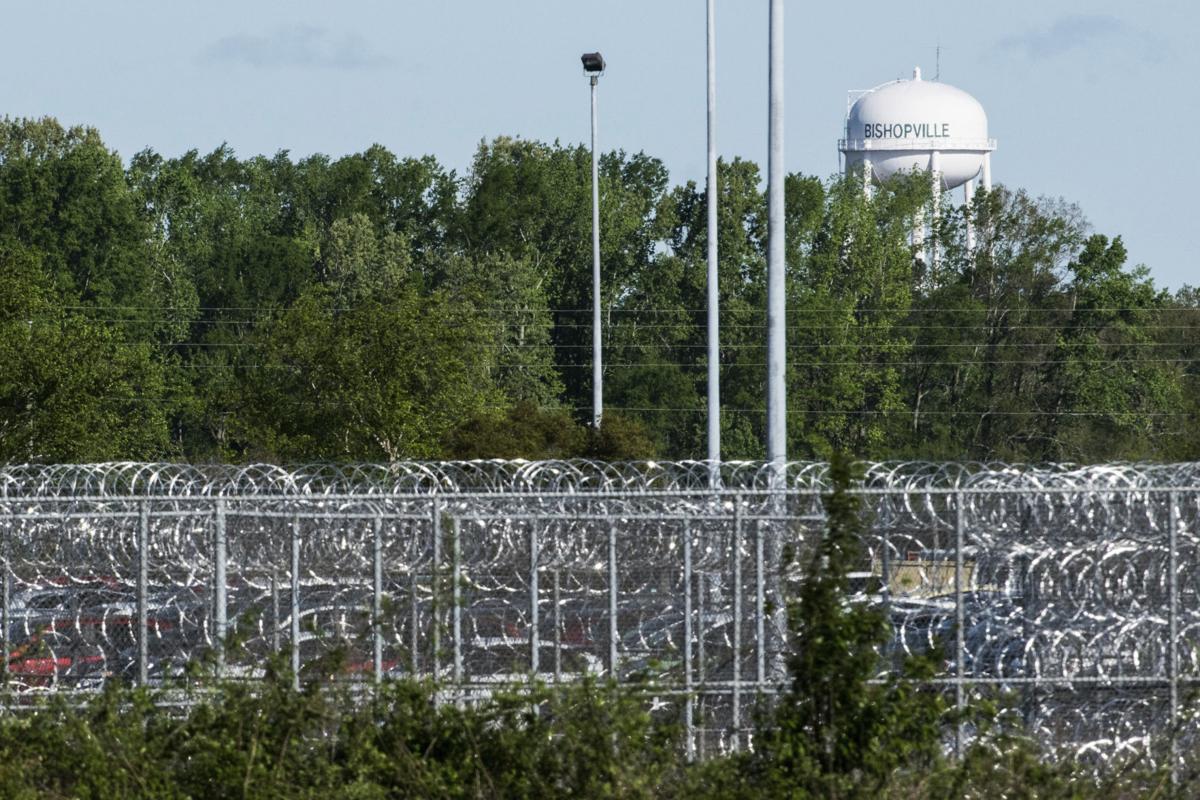 A fence surrounds the Lee Correctional Institution on Monday in Bishopville. Multiple inmates were killed and others seriously injured amid fighting between prisoners inside the maximum security prison in South Carolina. AP Photo/Sean Rayford

This shows the Lee Correctional Institution on Monday, April 16, 2018, in Bishopville, S.C. Multiple inmates were killed and others seriously injured amid fighting between prisoners inside the maximum security prison in South Carolina. Sean Rayford/AP

A fence surrounds the Lee Correctional Institution on Monday in Bishopville. Multiple inmates were killed and others seriously injured amid fighting between prisoners inside the maximum security prison in South Carolina. AP Photo/Sean Rayford

COLUMBIA — South Carolina legislators agreed Wednesday to jump-start a debate on sentencing reform following an hours-long riot at a state prison in Lee County that left seven dead and 22 injured.

The bipartisan proposal introduced last month would parole more nonviolent offenders and give inmates incentives for behaving. Supporters hope the changes will improve oversight of those left behind the razor wire, after the first round of reforms passed in 2010 resulted in a concentration of violent inmates in fewer prisons.

The House unanimously decided to let the proposal skip the committee process altogether, allowing for floor debate as early as next week. The move came a day after House Democrats demanded improvements in the state's historically underfunded prisons.

But any legislative changes are at least a year away. The bill has no chance of passing this session since time is running out. The session ends next month. Its sponsor, Republican Rep. Mike Pitts, said his goal is to get "some of the debate out of the way" so it stands a better chance next year when he refiles it.

There's also virtually no chance of additional funding for the S.C. Department of Corrections in the upcoming fiscal year, beyond what the House and Senate have already put in their budget plans. Negotiations on the chambers' differing proposals will determine whether prison officers get a $750 or $1,000 pay increase, which would boost the average starting salary to $34,300. Legislators recognize neither amount is enough to entice applicants to fill the agency's more than 600 officer vacancies.

At the time of the riots Sunday at Lee Correctional Institution in Bishopville, six officers were working in the three housing units involved in the melee — two unarmed officers per 250 to 260 inmates. Officers are trained to back out and call for help if they can't stop a fight, and that's what they did, South Carolina Department of Corrections Director Bryan Stirling said. No officers were injured in the riots, which Stirling said were gang-related.

The $5 million in the Senate's plan matches what Gov. Henry McMaster put in his budget proposal for salary bumps.

Spokesman Brian Symmes said the governor will advocate for more in the future, as he's “committed to continuing to invest in officers who put their lives on the line,” but he did not say how much more McMaster is willing to spend on prisons.

“I don’t care what we pay, if your life is at risk on a daily basis, people are not going to take it," said Smith, who is also running for governor. “We are at a crisis point, and action must be taken. Inmates’ safety should be guaranteed along with those who work there and the public.”

He called on the House Oversight Committee to immediately investigate prison conditions. The panel could decide next month to do so.

Committee Chairman Weston Newton, R-Bluffton, said the riots certainly suggest the Corrections Department should be included in the next round of reviews. Hearings would start when the Legislature isn't in session.

Law enforcement investigations into the deaths at Lee are only beginning, Stirling said. His agency is partnering with the State Law Enforcement Division and the 3rd Circuit Solicitor's office to investigate who's responsible for the uprising that began about 7:15 p.m. Sunday. As of Tuesday night, six of the 22 injured inmates remained at area hospitals. The agency initially reported that 17 inmates were hurt.

"We're going to use whatever evidence we can find," which will include security footage inside the cells, Stirling said.

Any charges will be up to the solicitor. If any of the killers are already serving life sentences, potential punishments could include solitary confinement, he said.

Lee County Coroner Larry Logan said autopsies on those killed were being conducted in Newberry, but he declined to release any findings Wednesday.

Photos of the victims, which inmates took on their illegal cellphones and posted on social media, showed stabbed and slashed bodies. Cellphone video showed blood-streaked hallways and an inmate roaming the prison with a large knife.

'Packing them in tight'

The prisons agency had been allowed to run a deficit for three consecutive years, as legislators who didn't want to appear soft on crime balked at the idea of releasing inmates early to make up for Great Recession-era budget cuts. And costs were expected to skyrocket.

South Carolina's prison population and its expense to taxpayers had soared from fewer than 9,200 prisoners, costing the state $64 million, to 25,000 inmates, costing $394 million, over 25 years. If trends continued, the prison population was expected to surpass 28,000 in five years, costing an extra $141 million to house and feed them, and much more for construction of new prisons, according to a report by the Sentencing Reform Commission.

The commission's year-long review also found that nearly half of inmates were convicted of nonviolent crimes, with drug charges, burglary, check fraud and driving under suspension being the most common charges, in that order.

The law successfully reduced the number of people going to prison for minor offenses, with 4,000 fewer people in prison last year. Instead of building prisons, the agency has closed six and merged two others.

But the law wasn't implemented as designed.

"We should be taking the money saved and putting it back in the system" to improve oversight and training for nonviolent offenders out on parole, said Sen. Gerald Malloy, D-Hartsville, the commission's chairman.

But there was no money to reinvest, as the Legislature instead slashed state law enforcement budgets to close deficits. The state budget being finalized for 2018-19 will finally bring officer ranks in the state's parole and probation agency back to their pre-Great Recession levels, Pitts said.

He contends the state couldn't proceed with another round of sentencing reforms until that happened.

The proposal he introduced in the House last month would further reduce the number of nonviolent drug offenders, allowing them to be released after meeting 65 percent of their sentence, down from 85 percent, if they have behaved. Other changes include redefining some drug charges as nonviolent and letting prison officials release nonviolent prisoners without a parole hearing if they've reached education and work training goals and don't have a discipline record.

Malloy said the state must also do something to address inmates who can't be paroled. Concentrating violent offenders in prisons with little oversight and nothing to do is a recipe for disaster, he said.

"We've beaten them down as humans, and there's no incentive to behave," said Malloy, whose district includes Lee. "Their blood is on our hands. We're ignoring them."

Marc Morje Howard, a professor of government and law at Georgetown University, is the founding director of the Prisons and Justice Initiative. Howard said South Carolina's problems mirror issues facing prison systems across America. In that respect, the melee was not entirely unexpected.

Overcrowding, understaffing and a dearth of programs to help occupy and rehabilitate offenders leave inmates across the nation living in inhumane conditions that are ripe for violence, Howard said.

“We are essentially warehousing people and packing them in tight spaces,” he said. “These young men have nothing else to do, and at some point, things explode."

Glenn Smith and Andrew Knapp contributed to this report.