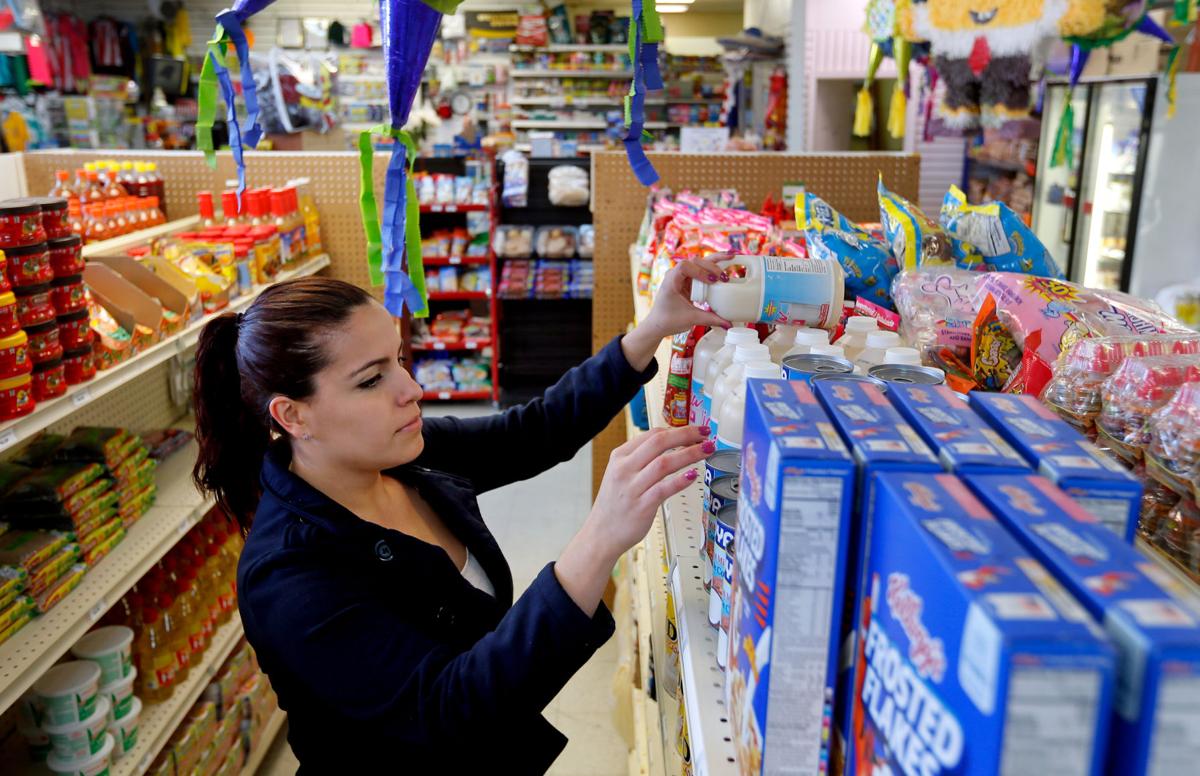 Paola Navarro organizes shelves Thursday at Rincon Latino on Remount Road. "A lot of my customers are scared," she said. Michael Pronzato/Staff 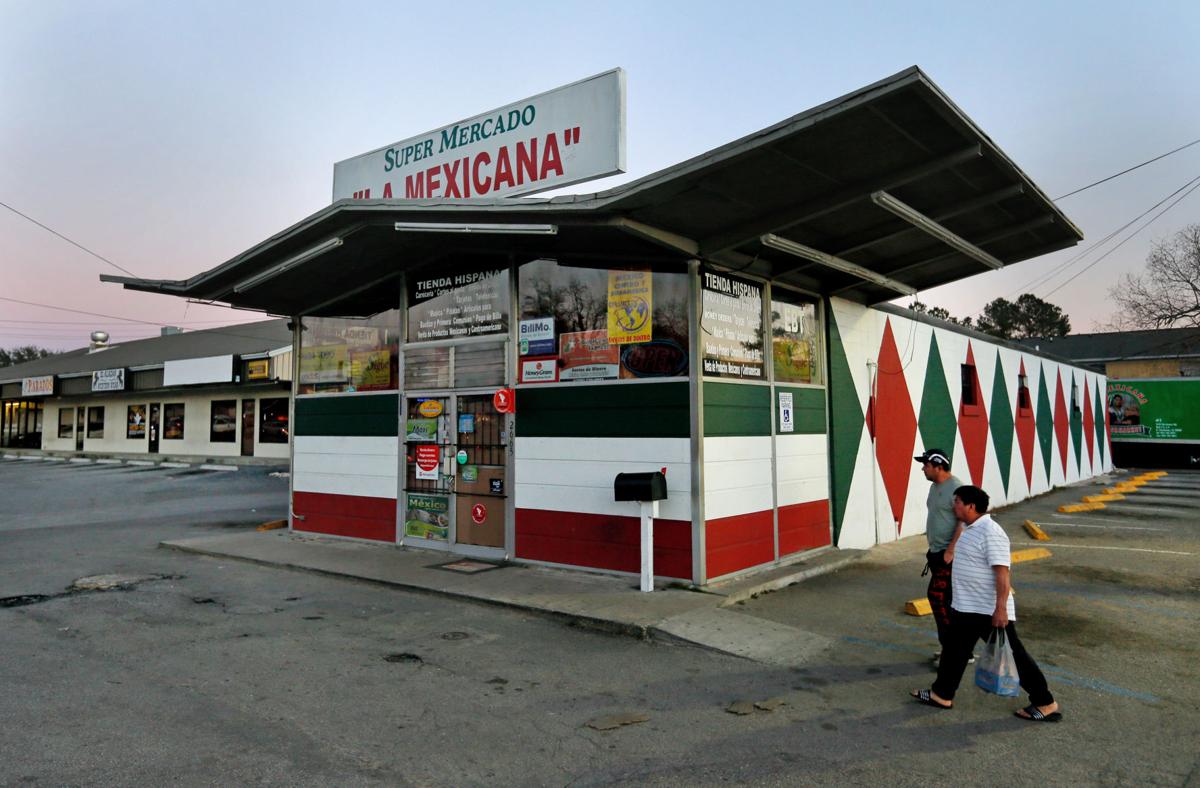 La Mexicana on Ashley Phosphate Road in North Charleston is closed Thursday. The supermarket and three other nearby stores were shuttered during the national "day without immigrants" protest. Michael Pronzato/Staff 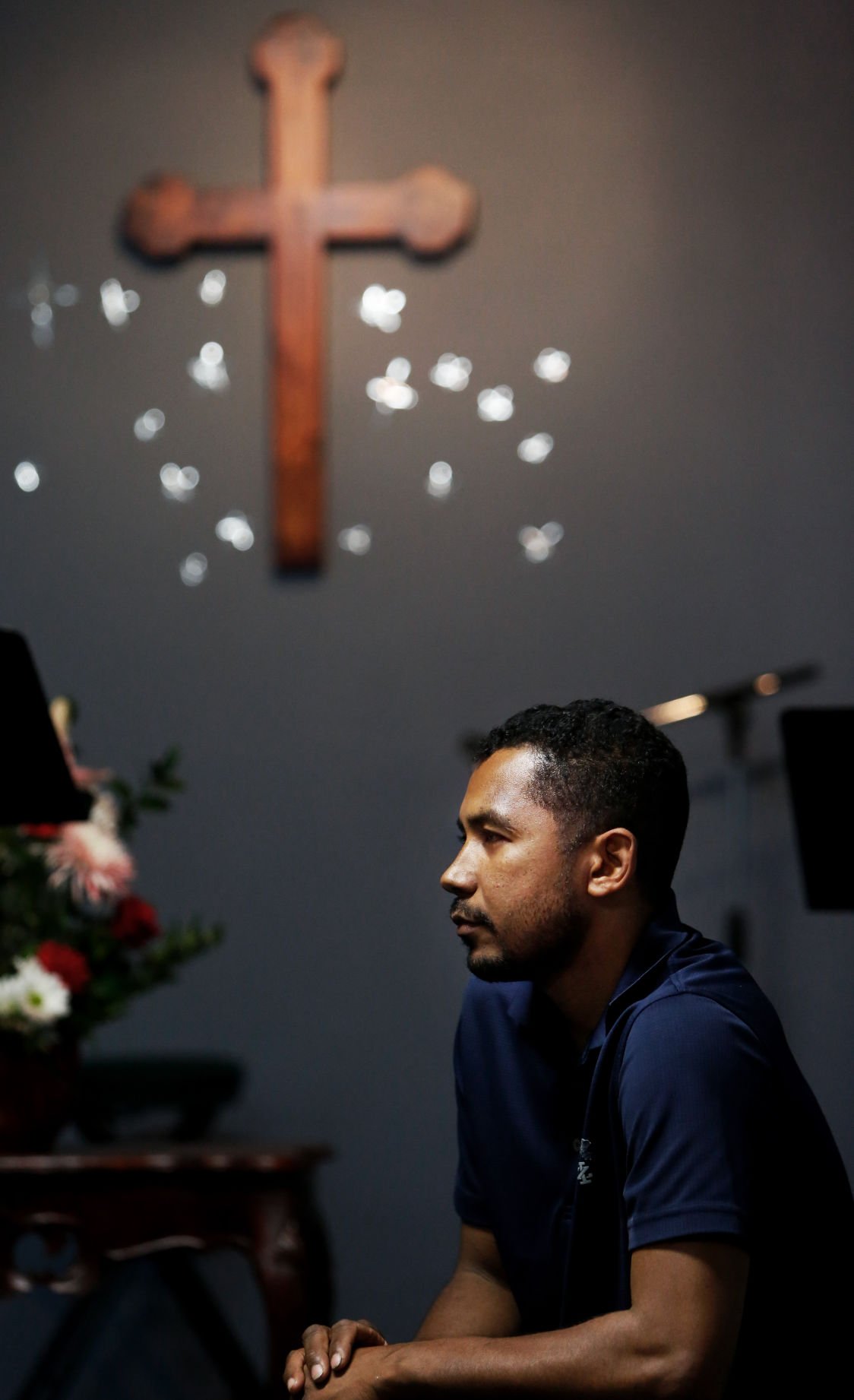 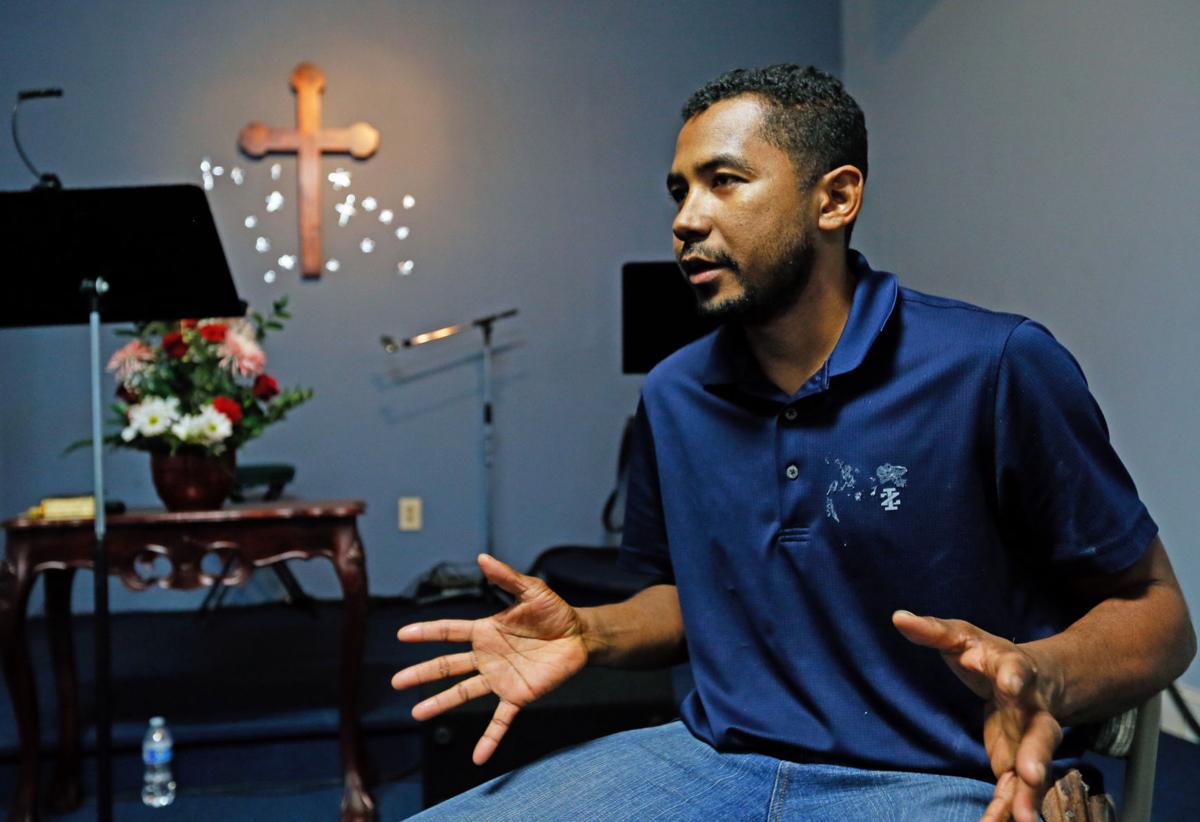 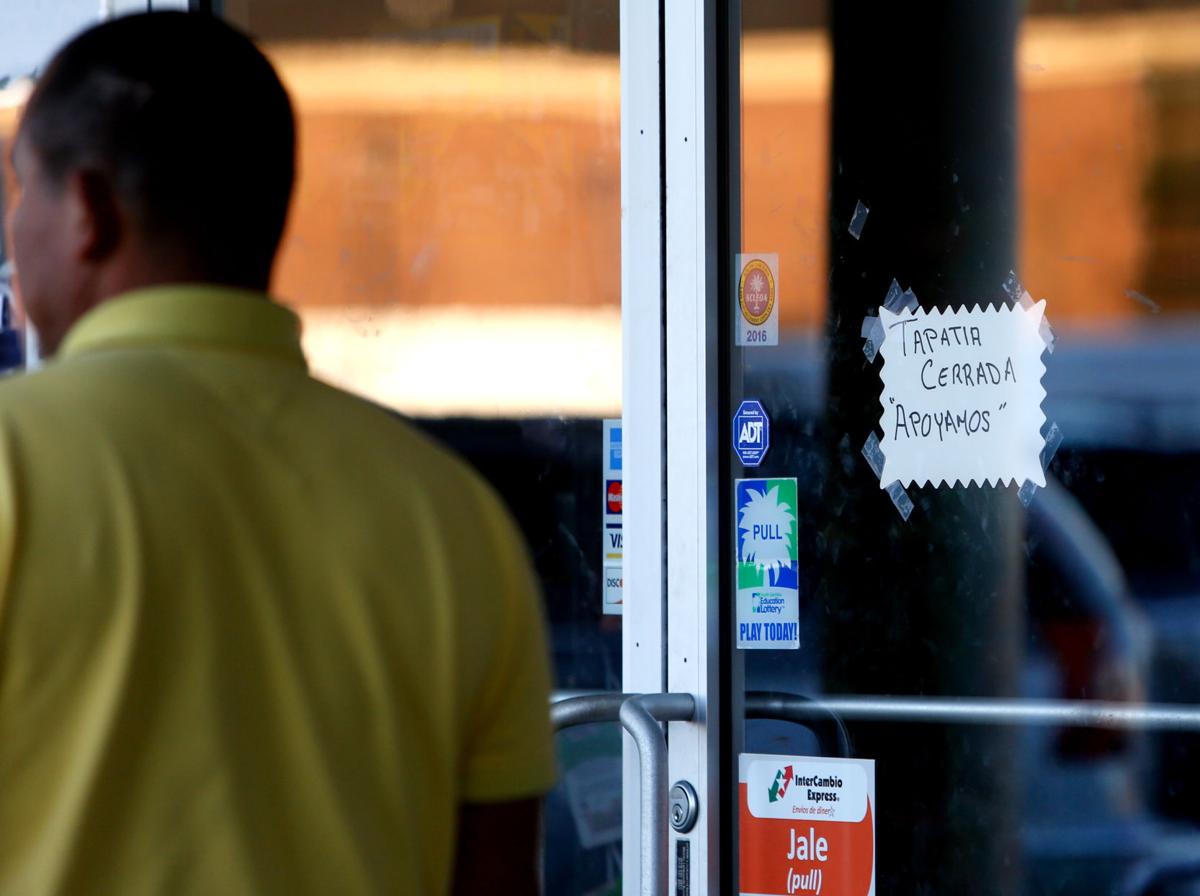 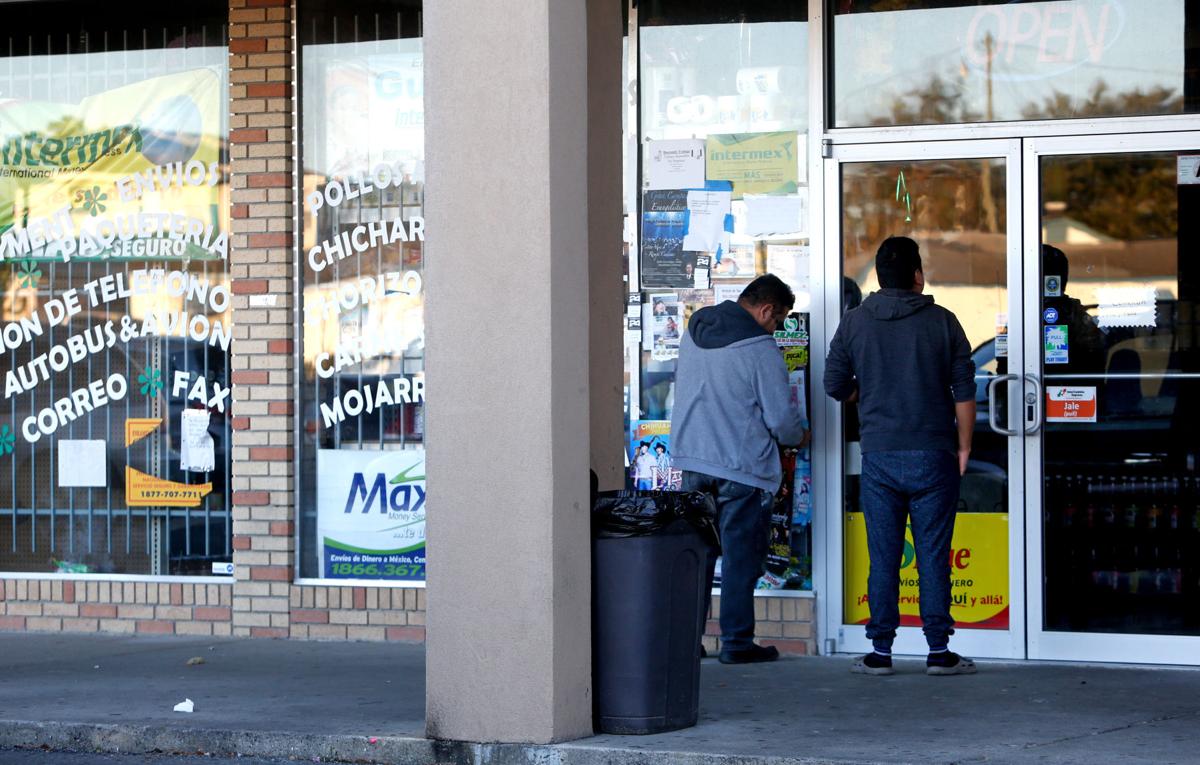 Paola Navarro organizes shelves Thursday at Rincon Latino on Remount Road. "A lot of my customers are scared," she said. Michael Pronzato/Staff

La Mexicana on Ashley Phosphate Road in North Charleston is closed Thursday. The supermarket and three other nearby stores were shuttered during the national "day without immigrants" protest. Michael Pronzato/Staff

At first, she heard about a raid at a Hispanic grocery store in North Charleston: Federal agents rounded up all the customers.

Then, Lydia Cotton got phone calls about 50 people taken from one community, 60 from another — all suspected of being in the country illegally.

As a liaison between officials and the city's Spanish-speaking population, Cotton looked into each report. None were true.

"That fear is all over the nation," she said. "But that fear creates chaos."

Rumors of broad sweeps by U.S. Immigration and Customs Enforcement have spread this month as President Donald Trump's policies on deportation expand. The Lowcountry's largest jail has seen an uptick in ICE detentions, and the area is not immune to such talk, though federal authorities insisted that recent arrests are a continuation of practices used under Trump's predecessor.

But as the president's hard-line stance on immigration comes into focus and sets the tone for officers who enforce the law, apprehension among local communities will persist, advocates said. Adding fodder on Friday was an Associated Press report stating that the president considered deploying 100,000 National Guardsmen to round up immigrants; the administration denied it. Homeland Security Secretary John Kelly also has signed measures to speed up some deportation proceedings, hire more ICE agents and enlist local police officers as de facto immigration agents, The Washington Post reported Saturday.

The 680 arrests nationwide one week in early February also indicated a possible shift in the government's approach to enforcement. About 91 percent of those arrested in the past fiscal year were from the most dangerous class of immigrants that includes national security threats and serious criminals, according to ICE statistics. Only 75 percent of the ones captured recently came from that group, the agency said.

Patricia Ravenhorst, an attorney who directs the immigrant victim program at the S.C. Victim Assistance Network, said federal agents have been contacting immigration attorneys in search of their clients. She had never seen that in the past, she said.

The recent arrests might be business as usual for ICE, but the operations seem different, Ravenhorst said.

"I think the enforcement has created a lot of the fear it intended," she said.

Nineteen of the 680 recent arrests happened in South Carolina from Feb. 6-10, though an ICE spokesman wouldn't say exactly where. Under a government contract, the Charleston County jail accepts detainees arrested throughout the Carolinas, so records there show a regional perspective: 74 ICE detainees were booked that week.

Those detentions are on the rise.

Between Jan. 9 and Feb. 10, the jail took in 550 detainees — the most active period in the past six months, according to a Post and Courier analysis of 7,000 online booking records.

"There are ebbs and flows for a variety reasons," ICE regional spokesman Bryan Cox said. "But I'm not aware of any significant change in operations. ... These are routine, ongoing fugitive operations that we do every day."

In 2011, Sheriff Al Cannon delivered a plan to Washington for the county jail to hold up to 250 ICE detainees at a time, charging the government $55 per person every day. Cannon’s proposal went unanswered, he said, until it was approved last year. The jail started taking them Oct. 1.

Since then, the facility has seen a steady flow of people arrested throughout the region. The largest group — about 260 in one week in October — consisted mostly of refugees who fled Haiti after Hurricane Matthew.

Aside from that week, the jail saw an average of about 15 detainees weekly for much of last year, the newspaper's analysis showed. But that spiked in late December, when 190 came in a week before Christmas. Since then, the jail has averaged about 100 every week.

Cannon said the detainees are typically kept for a matter of days before being transferred to federal holding facilities in Georgia. The activity could increase, with little warning from ICE.

"They don’t give us a great deal of information about what they’re doing," he said.

North Charleston has one of the highest concentrations of Hispanic residents here, making up 11 percent of its 108,000 people. They account for 5 percent of the county's population.

Paola Navarro, 23, manages the market. She has heard from women whose husbands have been deported, she said. She has heard about ICE traffic checkpoints, though authorities say they haven't used that tactic.

But the intense fear has made it difficult for some to go about their business.

Trump has vowed to focus on immigrants with rap sheets, but one of his first executive orders indicated that anyone here illegally could become a target.

Under former President Barack Obama, the government zeroed in on recent border-crossers and immigrants thought to pose a threat. Even then, a record 409,000 people were deported in 2012.

But Trump has signaled a resurgence of practices that could top those numbers. Under a program dubbed 287(g), local police officers could be trained on ICE systems to investigate whether suspects encountered in the field are in the country illegally — essentially expanding the force of immigration agents. The practice was restricted under Obama, but the Homeland Security secretary has given the go-ahead to seek out such partnerships, The Washington Post reported.

People used to call Charleston immigration attorney Bob Lowe after being pulled over by police for a broken taillight and detained because they were here illegally. That's a seldom occurrence now, he said. They are calling instead out of fear that those times will return.

"They really think the hammer is coming down," he said.

Trump offered this month's ICE arrests as proof he was making good on a campaign promise.

Those caught locally included a 49-year-old Goose Creek resident stopped by North Charleston police for making an illegal U-turn. The man has been caring for a son who suffered brain damage in a traffic crash, he said last year in a court filing. But he also had a domestic violence charge in his background, and he now faces deportation.

A 25-year-old also sits in the county jail, charged with having sex with a 13-year-old prostitute. North Charleston police found him and a used condom inside a car near a business. He handed them a Mexican ID card.

Federal officials declined to comment on specific cases, and they refused to immediately provide numbers on local arrests. They also wouldn't say how many agents were assigned to the Charleston area, which has one of two ICE field offices in South Carolina.

Lowe said Charleston has few agents compared with other areas, limiting the scale of arrest operations here. Deputizing local officers could change that, he said. Trump also wants to hire another 10,000 agents to supplement the nationwide force of 20,000.

Ravenhorst, the victims advocate, said several ICE agents told her last week that they are still allowed to use their own judgment on whether to arrest particular immigrants.

"We don't want officers to be stripped of that discretion," she said. "I'm concerned about ... whether it's going to be an aggressive culture when it's very clear from on high that they're going to be rewarded for being aggressive."

David Vyborny, who runs OccamLegal Immigration Attorneys in Charleston, has handled an influx of phone calls from immigrants curious about whether their legal status is in jeopardy. Some fret that they'll be shipped away.

Cotton, the Hispanic liaison, urged others on Facebook not to make themselves "24-hour victims" held captive by their own worry about immigration sweeps. She hosted an event last week for residents to air their concerns and ask lawyers for advice.

"The fear won't let us move forward," she said.

Ulises Ruiz immigrated to the U.S. from Mexico 19 years ago and serves as music leader of the Hispanic ministry at Charleston Baptist Church in West Ashley.

His father is a citizen, and he has applied for a green card. He's not worried about being deported. But others won't even emerge from their homes, he said.

"I try to tell the congregation to just come, pray, take their time," he said, "and put it in God’s hands."

He sells tomatoes and Mexican chili peppers on the side, but his regular work lies in the petroleum industry. He and his family are legal residents, but like Ruiz, he sees how others are affected.

"No one’s coming to buy anything,” Gonzalez said.

He hoped for a better day and said, "We’ll see what tomorrow brings.”