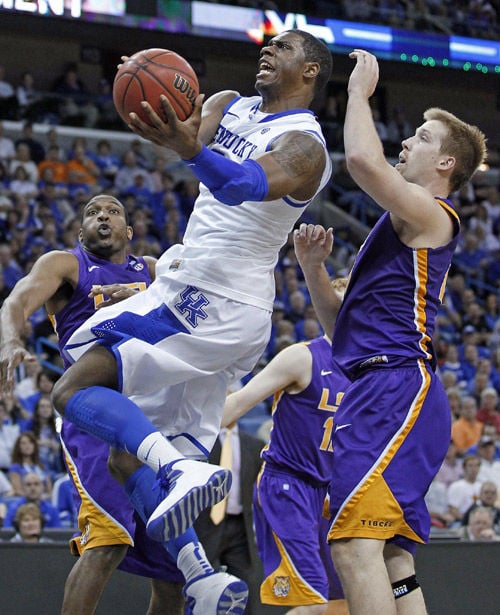 Kentucky forward Terrence Jones had a 9-0 run himself as the Wildcats got past LSU, 60-51, on Friday in the SEC tournament. 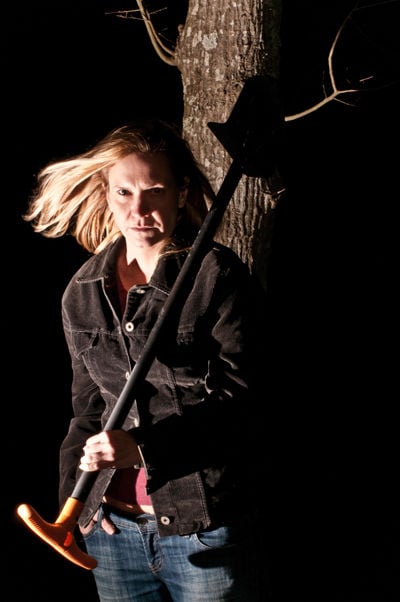 Kentucky forward Terrence Jones had a 9-0 run himself as the Wildcats got past LSU, 60-51, on Friday in the SEC tournament.

NEW ORLEANS -- John Calipari sounded like a coach trying to explain away a loss.

No. 1 Kentucky wasn't just supposed to beat LSU, it was supposed to win comfortably. Instead, the Wildcats labored through an 18-turnover performance in which the feisty Tigers led early in the second half and never trailed by more than nine before Kentucky closed out a 60-51 victory Friday in the second round of the Southeastern Conference tournament.

"I'll go back and watch the tape and see what adjustments (need to be made), because people will be watching the tape, saying 'This is how you need to play them,'" Calipari said. "And we have been played every way possible."

Michael Kidd-Gilchrist helped Kentucky overcome its early lethargy, scoring 10 of his 19 points in the opening 20 minutes before his fellow Wildcats came alive in the second half.

Terrence Jones added 15 points and 11 rebounds, including a 9-0 run by himself that gave the Wildcats (31-1) the lead for good as they extended their winning streak to 23 games.

Lamb credited the Tigers with turning up the intensity, adding that the Wildcats perhaps should have anticipated that, given LSU (18-14) would hardly be guaranteed a postseason tournament berth if it lost.

"It might be their last game of the season and they just came out with a fight and were hungry," Lamb said. "They punched us in the face in the first half, and in the second half we fought back and pulled out the win."

Kentucky next plays in the tournament semifinals Saturday against Florida, which advanced by beating Alabama 66-63.

Storm Warren scored 14 for LSU, which came in as a 17-point underdog after beating Arkansas in Thursday's opening round. The Tigers led by as much as five points early in the second half before Jones' surge turned the tide.

"I didn't want my season to end," Warren said. "I just pretty much came out and laid it on the line."

Andre Stringer added 11 points for the Tigers, who might have had a real chance to pull off the upset if they could have shot better than 29.4 percent (20 of 68).

"A tough, tough, tough loss," LSU coach Trent Johnson said. "I thought we competed as hard and as good as we have all year. It's unfortunate for us that we had some shots that didn't go down for us. ... But let's give credit to them. That's not a good basketball team that beat us. That's a great basketball team."

LSU held the lead early in the second half, thanks to an 11-2 run highlighted by Ralston Turner's transition 3-pointer and his driving finger roll.

Then Jones, who scored a season-high 27 points when these teams met earlier in the season, threw down an alley-oop lob from Darius Miller and soon after drove the baseline for another dunk.

"Our coach challenged us to be more aggressive, said that they were being more physical than us in the first half," Jones said. "We just tried to step that up in the second half by getting to the foul line, by just going through bumps."

Jones' putback gave Kentucky the lead for good at 37-35, and soon after Davis began to find his typically smooth stroke, scoring 11 of his points in the second half. While Kentucky never led by double digits, it never appeared seriously threatened during the final five minutes, after LSU's 6-foot-9, 262-pound forward Johnny O'Bryant fouled out.

Turner and guard Anthony Hickey, a Kentucky native, each finished with 10 points for the Tigers, who lost for the fourth time in five games.

The Wildcats shot 43 percent (18 of 42) and outrebounded LSU 42-36, but their turnovers were double their average for the season, helping the Tigers stay within single digits.

Kentucky entered the game not only as a heavy favorite but had the crowd overwhelmingly in its favor, despite the fact the game was being played 85 miles from LSU's Baton Rouge campus.

The Tigers hardly looked intimidated though, turning in a scrappy defensive performance. LSU forced nine turnovers in the first half and held the Wildcats to under 32 percent shooting while holding the lead for much of the first 20 minutes.

LSU went in front with an early 10-1 run ignited by Hickey's layups and capped by 3s each by Stringer and Turner, the last making it 12-7.

Kentucky got little production early from Davis, who had four turnovers and only one point before going to the bench for the last seven minutes of the half with two fouls. The Wildcats led only 25-24 at halftime after Lamb's jumper late in the period.

"They just got really physical and made it tough," Calipari said of LSU. "They got balls from us. They made baskets. We missed layups. We turned lazy passes over. They're shooting breakout layups. ... I'm happy we won. Now we've got to go on and figure some of this stuff out."