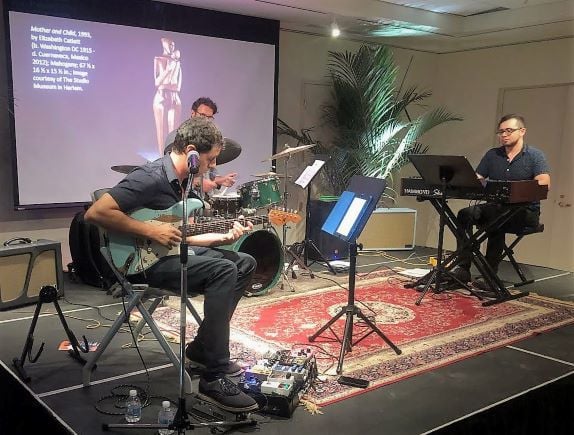 Lee Barbour (left), Ron Wiltrout and Jonathan Lovett of the Lee Barbour Trio perform songs informed by works of art from the "Black Refractions" exhibition at the Gibbes Museum of Art, in partnership with Charleston Jazz. Provided/Charleston Jazz 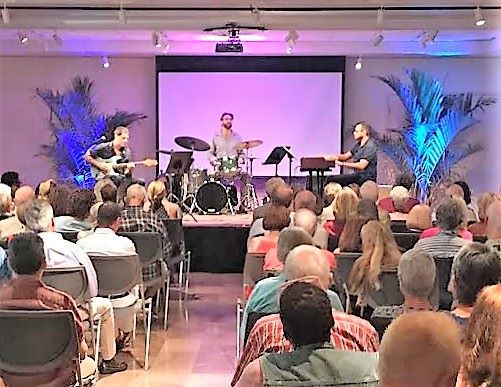 The Lee Barbour Trio played to a full house in late July at The Gibbes Museum. Hurricane season can affect programming at arts organizations. Charleston Jazz/Provided

Can't find the words for how you feel about a certain work of art? How about putting it to music instead?

Such is the ingenious undertaking of the Art of Jazz, the regularly sold-out series of events at the Gibbes Museum of Art that represents a partnership with Charleston Jazz. For the third year, it has enlivened the museum with jazz-fueled concerts that are inspired or informed by works of art in the Gibbes' current exhibitions.

OK, now imagine this endeavor in the impressive hands of one of Charleston's standout jazz ensembles, the Lee Barbour Trio. To take it on, guitarist Barbour, keyboard player Jonathan Lovett and drummer Ron Wiltrout immersed themselves in "Black Refractions: Highlights from The Studio Museum in Harlem," the touring show now up at the museum through Aug. 18.

The result was a truly transcendent, and, for me, wholly new engagement with visual art. Throughout the one-hour, six-song set, the musicians performed compositions that were either specific to a work of art or were renditions of existing songs that called to mind the trio's experience with the art. This, incidentally, was also accompanied by a complimentary Manhattan cocktail created expressly for the set.

This summer in Charleston, I took a vacation from my wanderlust attitude

To wit: Ron Wiltrout's ruminative "Lawdy Mama" realized the 1969 work of the same name by Barkley L. Hendricks. The resulting work felt as gorgeously lonely as the work's sole woman, who gazed gravely at us from a projection behind the musicians. (One nitpick: It would have served the event better to mount additional screens elsewhere in the space, as gaining optimal access to the images was at times a neck strain.)

From there, the trio's group composition, "3rd Text," was created from the titular work of Odili Donald Odita, a brightly colored abstract painting. Crisp percussive and sharper sounds were as vibrant and edged as the clean lines and angularity of the painting.

The trio then rendered a tender, intimate version of composer Esbjorn Svensson's "Believe, Beleft, Below" to evoke Elizabeth Catlett's sculpture "Mother and Child." Barbour introduced the number by sharing his own experience in the past two years watching his wife with their 2-year-old.

In what for me was the most stirring example of music doing for art what perhaps words may not, another group composition uncannily captured Kori Newkirk's 2000 work, "Solon 6:12." Wiltrout's intricate percussion seemed in complete concert with the piece's fastidiously crafted plastic pony beads, coalescing into romantic abstract landscape that was magnificently expressed by Barbour's emotionally resonant strings and woven together by Lovett.

The trio's success at getting under the hood of these works to present both the parts and the whole was a revelation. It is one that will likely lend to my experience of art and music moving forward.

Over the weekend, I dabbled in the lighter, lounge-friendly side of the crowd-pleasing "Jazz Meets the Beatles," a matinee gathering of four female vocalists. Directly across the street from the Gibbes at the Circular Congregational Church, the revue-style production served up velvety treatments of Fab Four favorites spanning the group's hit-happy trajectory.

Emceed by the gloriously piped Maggie Worsdale, she sprinkled the chronologically curated 16 numbers with contextual tidbits, while also introducing artists Heather Rice and Gracie and Lacy, the sister act of Emily Miller and Lacy Miller. Accompanied by pianist Barry Brake, the vocal-driven renditions were most effective with ballad-like numbers, such as Worsdale's lovely "In My Life" and Rice's beautiful "Blackbird."

Side by side, the two music mashups offered a study in contrasts, to be sure, but were joined by one striking notion. Artists have long paid homage to other artists, crossing styles and disciplines. When they do, we all have much to gain.