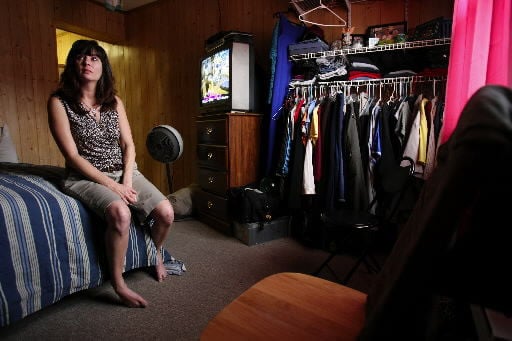 Kris Phillips was an executive assistant for a medical firm and ended up addicted to cocaine, dancing in a strip club and then serving time in prison before cleaning herself up after renewing her faith. 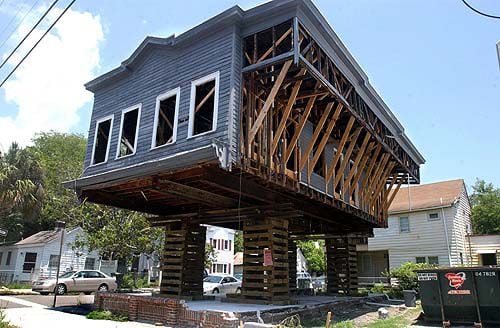 This building at Ashley Avenue and Race Street in Charleston, has been hiked up on wooden pallets. According to a Board of Architectural Review notice, the home has been approved 'after-the-fact' for demolition.

Kris Phillips was an executive assistant for a medical firm and ended up addicted to cocaine, dancing in a strip club and then serving time in prison before cleaning herself up after renewing her faith.

This building at Ashley Avenue and Race Street in Charleston, has been hiked up on wooden pallets. According to a Board of Architectural Review notice, the home has been approved 'after-the-fact' for demolition.

HANAHAN — Flat broke, strung out on cocaine and wanted by the law, Kris Phillips felt her world quickly coming apart at the seams.

Tucked away in a cheap motel room, she wrestled with the paranoia and hallucinations tormenting her sleep-deprived mind. And she waited. Waited for the lawmen to finally come and haul her off to jail for violating her probation.

At age 42, Phillips had hit rock bottom after a precipitous fall from grace. In the span of two years, this slight, dark-haired woman had gone from middle-class suburbanite to stripper to homeless drug addict. The end was coming. She could smell it in the air, taste it on her tongue.

It was just a matter of days before Phillips ended up behind bars, pulling a seven-month stint in state prison. But there, something happened. In the dank confines of a cinder block cell, she read the Bible and found an inner peace and purpose that had been missing.

Now a free woman and clean for almost two years, Phillips and her husband share a squat, two-room apartment and dreams of a better life. Though their past is painful, Phillips also recognizes the lessons it might hold for others. Lessons about how a few wrong decisions can send a decent life spiraling out of control.

And how a will to live and a desire to change can put a person on the road to redemption, no matter how dark the path they are on.

After four failed marriages, Phillips found her soulmate 10 years ago when she met her future husband, Doug, while working at a Florida restaurant. They moved to Charleston, got married and settled into a comfortable lifestyle. She worked as an executive assistant for a medical firm and did transcription work on the side. With her husband's pay from a pest control job, they soon were earning about $100,000 a year.

"She was one hard worker," said Marie Price, her former boss at Alpha Medical and Spinal Care. "She worked her tail off all day long."

The couple eventually settled into three-bedroom rental home in Shadowmoss Plantation. They bought nice cars, raced hot rods. Life was good. For a while, anyway.

In November 2005, Phillips' husband ended up in jail after a road rage confrontation resulted in shots being fired along Interstate 26 in North Charleston. He claimed self-defense, but police couldn't find a gun in the other car. Phillips said she went into a tailspin of depression and abandoned work. She lost her job, fell behind on bills and struggled to come up with $340,000 in bail money to spring her husband from jail. She needed money quick. So at age 40, she marched into the Wild Wild Joker strip club in Charleston and applied for a job as a dancer.

Her moves were terrible, the other dancers told her. She was stiff, leaden. Still, her fresh face and perky personality pleased the customers, who tipped well. She just needed to loosen up.

One night, a fellow dancer offered her a line of cocaine, and Phillips snorted it. She felt the surge, the lift, the euphoria, She tried some more, and some more after that. In no time, she was hooked. Within weeks, she was shooting it into her veins.

On stage, Phillips wore stockings on her arms to hide the track marks and hid needles in her tall, leather boots. It worked for a while, long enough to raise the bail money to free her husband. But by then, she'd lost her house and slept in her car.

"I was embarrassed and I didn't want anyone to know," she said. "It just got worse and worse. I was losing weight, I quit eating, I couldn't sleep. I was up two or three days, then it would be three or four days.'

Fresh out jail after three months, her husband implored her to quit the drugs. She refused to listen and swiped his cash to support her ever- growing habit.

"I felt so guilty," said Doug Phillips, who received probation for the I-26 confrontation. "I felt like I caused this by going to jail. I felt it was all my fault."

When he moved to Goose Creek to care for his ailing mother, Phillips returned to the streets to get high. She lost her job stripping and slept in her car, living off a small reserve of cash and whatever she could earn begging.

As the months dragged on, her life became a haze of drugs and anxiety. She met do-gooders who tried to help and one man who stalked and abused her. She traveled home to Alabama and back, and ended up in jail in Berkeley County, accused of forging her stepfather's signature on a check. Then came arrests for drugs and violating her probation. She also overdosed at one point and even slashed her wrists, she said.

Phillips tried to reconnect with her husband at various points but the coke kept winning out. By the time a bail bondsman caught up with her in September 2007, she was a strung-out mess who hadn't slept in days. She saw demons all around her and spent her time peering under doorways for signs of her pursuers.

"I was just absolutely insane from the drugs," she said. "I was absolutely out of control."

In prison one night, Phillips says she felt a hand touch her shoulder while she was alone in a cell. Soon after, she became drawn to the Bible. She read it through and through. She'd been raised a Methodist but long since had abandoned the church. Now, the words resonated with her, giving her strength, purpose.

"I spent the whole time praying. I had found my salvation," she said.

She asked God what she should do when she got out of prison. Should she return to her husband and Charleston or seek a new start somewhere else? She became convinced God wanted her to return to Doug.

"Prison saved her," her husband said. "If it weren't for prison, she would probably be dead by now."

Phillips said she has been clean and sober since her arrest. She has stayed out of trouble and worked as a waitress. She and her husband mostly keep to themselves in a cramped apartment just barely big enough to fit a bed, some clothes and a television. A handwritten sign by the door offers this quote: "It is in tough times we either rise up in Christ or fall away. Persecuted but not forsaken, cast down but not destroyed."

Phillips and her husband see bigger things in their future — better jobs, a bigger place, more normal lives. On Friday, they took a firm step in that direction when one of Phillips' old bosses called to offer her a job in a medical office. A fresh start in her old career. "I can't wait," she said, giddy with the news. "I'm a workaholic."

Her joy, however, is tempered with the knowledge that others still are out in the streets, living in a downward spiral. On a recent afternoon, Phillips ran into a woman she had befriended in the Berkeley County jail. The woman was harried, chasing down a drug dealer for a fix and turning tricks to stay high. Phillips hugged her close and told her it didn't have to be that way.

"I just hate to think about all the people out there like that," she said, tears running down her cheeks. "It breaks my heart. I've been there. It can happen to anyone. I just want to say to all those people, 'You can get through that too.'"