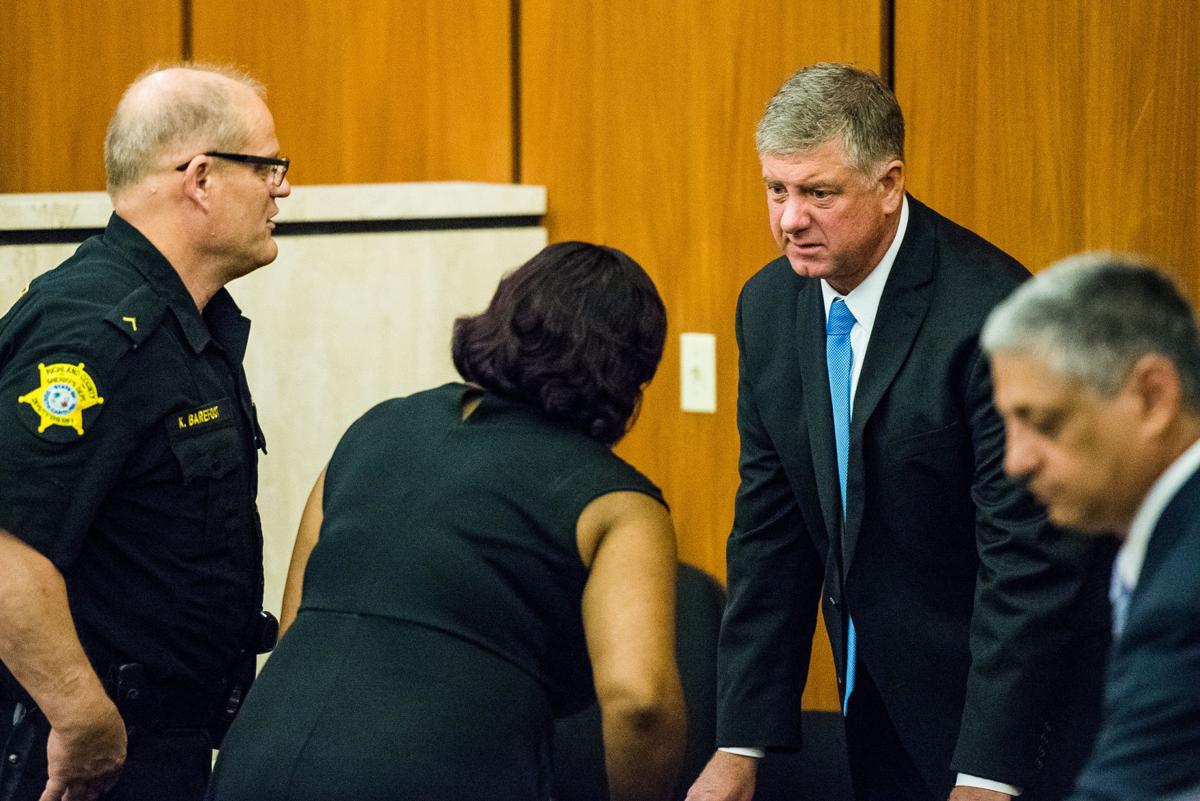 Former state Rep. Jim Merrill appears in Richland County court on Friday, Sep. 1, 2017. He pleaded guilty to a misconduct charge in a deal that requires him to cooperate with investigators. John A. Carlos II/Special to The Post and Courier 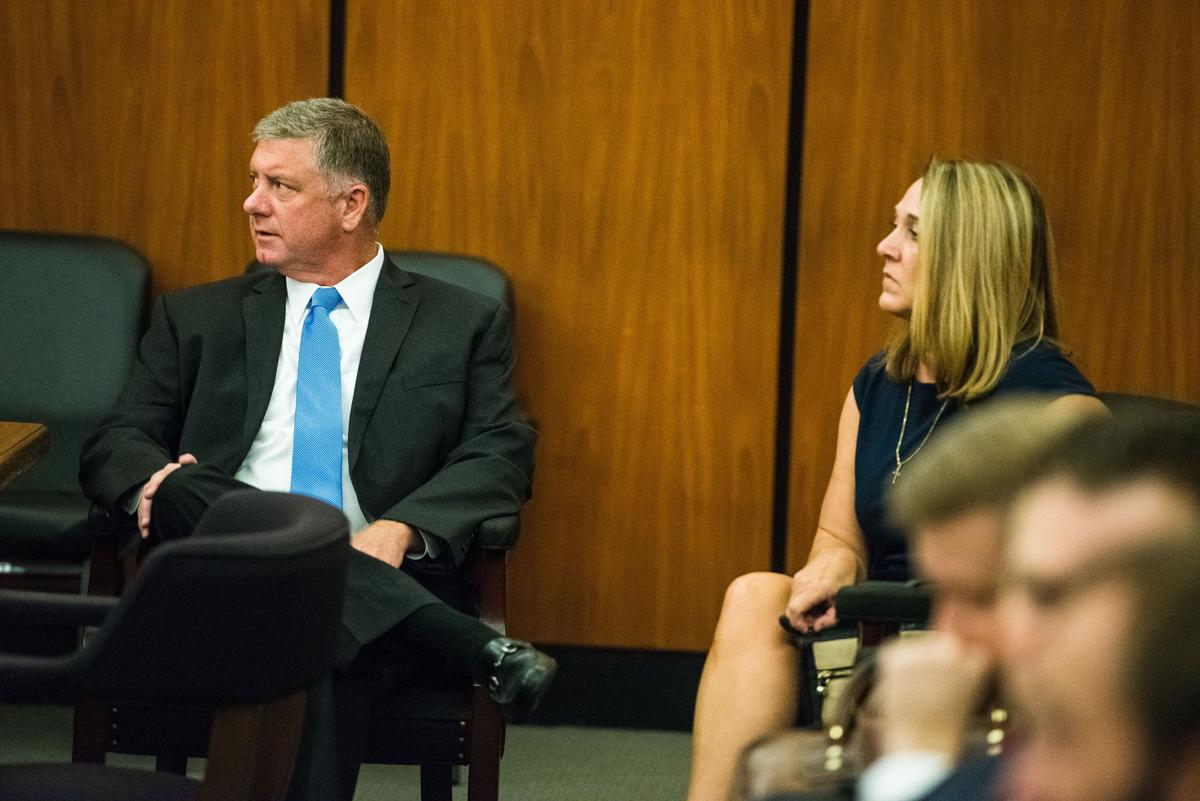 Former state Rep. Jim Merrill appears in Richland County court with his wife, Noel, on Friday, Sep. 1, 2017. He pleaded guilty to a misconduct charge in a deal that requires him to cooperate with investigators. John A. Carlos II/Special to The Post and Courier 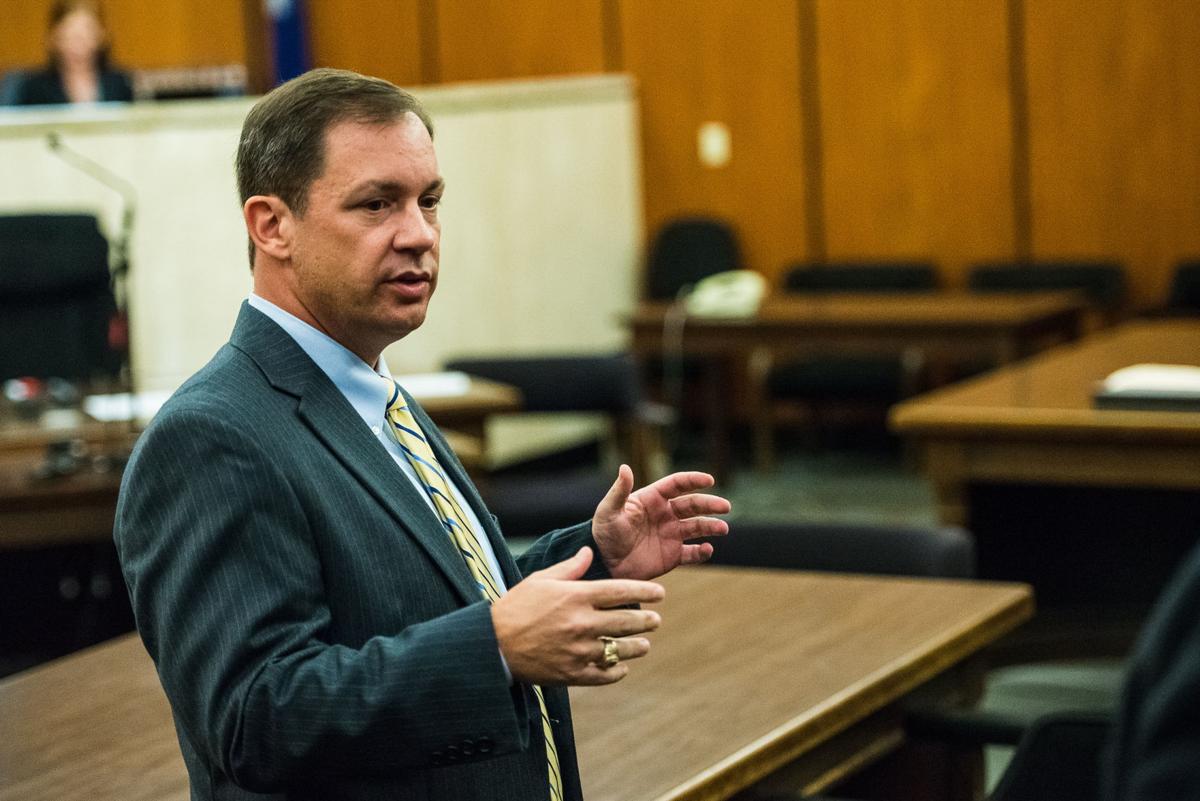 First Circuit Solicitor David Pascoe speaks with his legal team before the plea hearing of former state Rep. Jim Merrill in Richland County court on Friday, Sep. 1, 2017. Merrill pleaded guilty to a misconduct charge in a deal that requires him to cooperate with investigators. John Carlos II/Special to The Post and Courier

Former state Rep. Jim Merrill appears in Richland County court on Friday, Sep. 1, 2017. He pleaded guilty to a misconduct charge in a deal that requires him to cooperate with investigators. John A. Carlos II/Special to The Post and Courier

Former state Rep. Jim Merrill appears in Richland County court with his wife, Noel, on Friday, Sep. 1, 2017. He pleaded guilty to a misconduct charge in a deal that requires him to cooperate with investigators. John A. Carlos II/Special to The Post and Courier

First Circuit Solicitor David Pascoe speaks with his legal team before the plea hearing of former state Rep. Jim Merrill in Richland County court on Friday, Sep. 1, 2017. Merrill pleaded guilty to a misconduct charge in a deal that requires him to cooperate with investigators. John Carlos II/Special to The Post and Courier

Former state Rep. Jim Merrill received probation Friday after pleading guilty to a misconduct in office charge in a deal that requires him to cooperate with state investigators and the FBI as they continue to probe corruption at the South Carolina Statehouse.

Under a plea agreement, special prosecutor David Pascoe will not proceed with 29 other charges against Merrill as long as the Daniel Island Republican continues to provide authorities with truthful information and testimony in connection with the probe.

The charges aren’t being dismissed, Pascoe told Circuit Judge Robert Hood, and he is free to revoke the deal and prosecute Merrill on those counts if he believes the veteran lawmaker is holding out on investigators.

What's more, any information Merrill provides in the interim can be used against him if the deal is nullified, Pascoe said.

The plea agreement likely spares Merrill from a potential decades-long stretch in prison while providing Pascoe with a high-value Statehouse insider to guide investigators trying to root out legislative misconduct and graft.

The misconduct that Merrill pleaded guilty to is a misdemeanor that carries a maximum punishment of one year in prison and a $1,000 fine. Merrill's lawyers argued he deserved probation instead, given his lengthy record of public service and his efforts to "do the right things" since he was indicted in December, including speaking with authorities.

"The fact that he came in in March ... without a cooperation agreement, without a plea agreement and told the truth is a testimony to your character and your attempts to do the right thing," Hood said, before ordering Merrill receive one year of probation.

Merrill began cooperating with investigators without the safety net of a plea agreement in place, Pascoe said.

Several of the other charges against Merrill had been misdemeanors, as well, but he also faced two misconduct charges and a trio of felonies that carry up to 10 years in prison each. If Merrill toes the line, he will avoid those dramatically steeper punishments.

Merrill, 50, had been suspended from office since a grand jury handed down indictments against him in December. He sent a letter of resignation to House Speaker Jay Lucas' office Thursday evening, and his departure became effective one hour before his plea hearing in a Richland County courtroom.

It is unclear who will fill the seat to which Merrill was first elected in 2000. Two Republicans had already announced their intention to run for House District 99, which covers parts of Charleston and Berkeley counties, including sections of Mount Pleasant, Daniel Island, the Cainhoy peninsula, Hanahan and Goose Creek.

The week-long filing period for the seat opens Sept. 15, with the primary Nov. 14. The special election is Jan. 16.

Merrill stood quietly before the judge Friday as Pascoe detailed the plea agreement and thanked the State Law Enforcement Division and its chief, Mark Keel, for their "tenacity for the truth" in pursuing the corruption probe that has snared four lawmakers to date.

After the hearing, Merrill allowed his attorneys, Leon Stavrinakis and Matt Hubbell, to speak to the media.

"He has taken responsibility. He met with law enforcement on his own," said Stavrinakis, who is also a Democratic member of the Legislature. "He's done nothing but tell the truth through this matter. He followed through on the fact that if he made mistakes, however slight, he's willing to take responsibility for them."

When asked if he wished to address the court, Merrill declined, saying his attorneys had advised him against it.

Merrill’s plea agreement is similar to the one former House Speaker Bobby Harrell signed on to in 2014 when he pleaded guilty to misusing campaign money for his personal benefit. Harrell received three years' probation and he was required to become an open book for investigators, waiving his constitutional rights and agreeing to testify in court if they called on him.

Harrell’s agreement bans him from holding public office for three years. The charge to which Merrill pleaded guilty requires that he be removed from office, but there are no stipulations that would bar him from running again.

The indictment documents accuse Merrill, former House majority leader, of engaging in a pattern of wrongdoing going from 2002 until last year. Specifically, the violations include two counts of misconduct in office and 28 counts for violating the state's Ethics, Government Accountability and Campaign Reform Act of 1991 that was adopted following the FBI's Statehouse sting known as Operation Lost Trust.

Merrill stands accused of using his office and his consulting firm Geechie Communications to garner more than $1 million from trade groups and companies at a time when he was both a lawmaker and a consultant across several platforms.

Merrill is accused of failing to report money he received from companies and groups that lobby legislators, using his office for financial gain, failing to file reports of campaign-related spending from the House Republican Caucus and overcharging for his work.

The Post and Courier first raised questions about Merrill's dealings in a 2012 story that touched on some of the very issues outlined in the indictments. Merrill also figured prominently in "Capitol Gains," a 2015 series the newspaper produced with the Center for Public Integrity exploring South Carolina’s loophole-ridden campaign finance system that allows state lawmakers to use their campaign war chests like personal ATM machines.

Merrill's legal team initially called the charges against him flawed and indicated they planned to fight the allegations. He has kept a rather low public profile since his December bond hearing, and he has avoided the fiery attacks on Pascoe that others snared in the probe have lobbed at the prosecutor.

John Crangle, the government relations director for S.C. Progressive Network, was at Merrill's hearing. The longtime Statehouse watchdog said the plea agreement Pascoe offered Merrill is a sign the special prosecutor is using indictments of lawmakers like Merrill to learn about other possible corruption in Columbia.

"Pascoe's number one goal is cooperation," Crangle said, referencing the two plea deals the prosecutor has now cut. "There will be more heads to roll, I think."

Misconduct charges are pending against Rep. Rick Quinn, a Lexington Republican who is accused of failing to report more than $4.5 million paid to companies operated by him and his father, and using his position as House majority leader to steer $270,000 in House Republican Caucus funds to family businesses. State Sen. John Courson, R-Columbia, also is accused of using Quinn’s father's firm as a pass-through to convert more than $130,000 in campaign money for personal use.

Crangle, who wrote a book on the FBI's Operation Lost Trust corruption sting of the 1990s where multiple South Carolina lawmakers were indicted, said the pace of the ongoing scandal has been more methodical.

"Pascoe is setting the pace of these indictments and there's a reason for it," Crangle said.