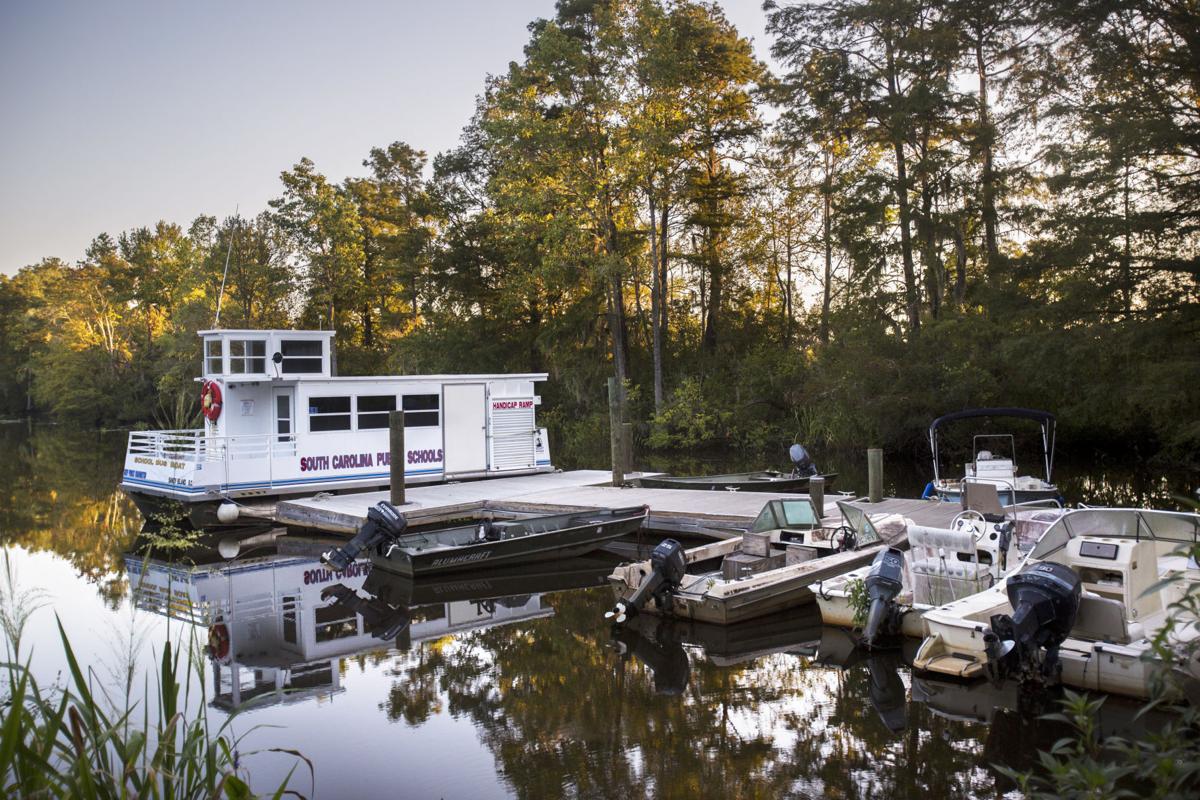 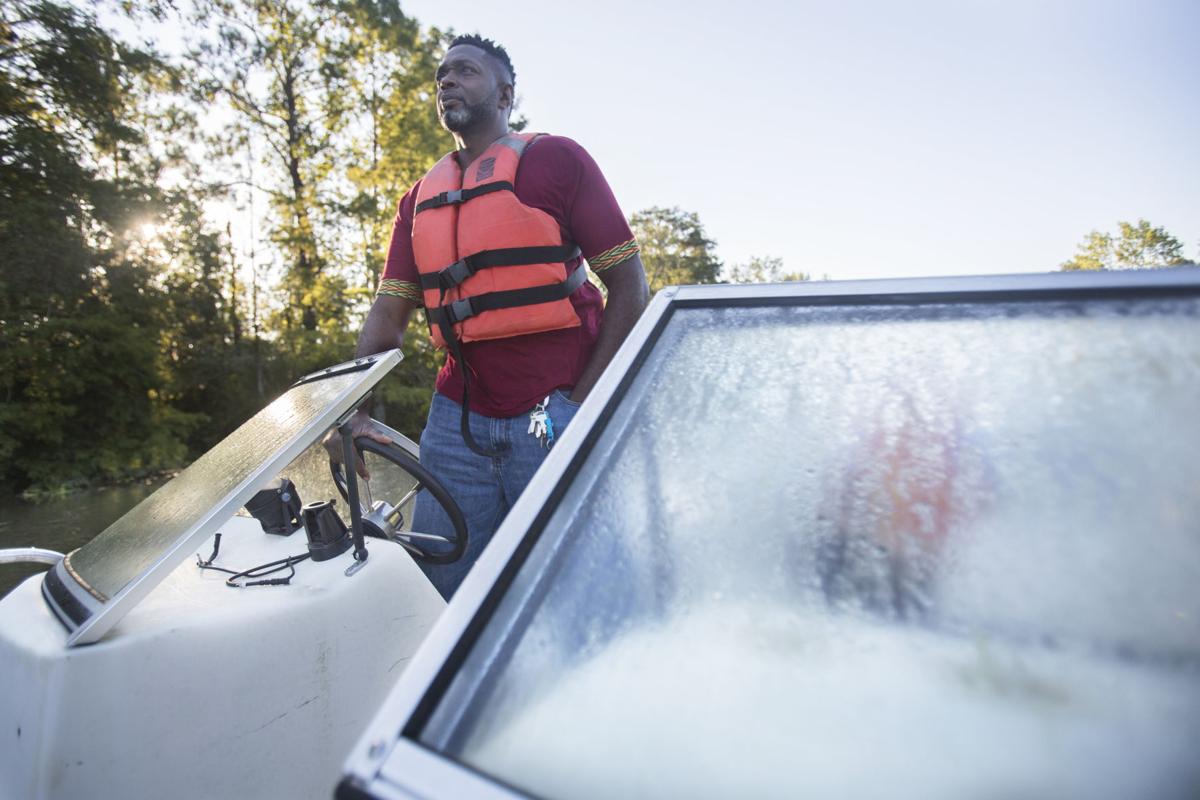 Rommy Pyatt pilots a boat back to Sandy Island for his tour business, Tours de Sandy Island, Thursday August 29, 2019. Pyatt grew up on Sandy Island and would take the school boat, Prince Washington, to class each day. Gavin McIntyre/ Staff 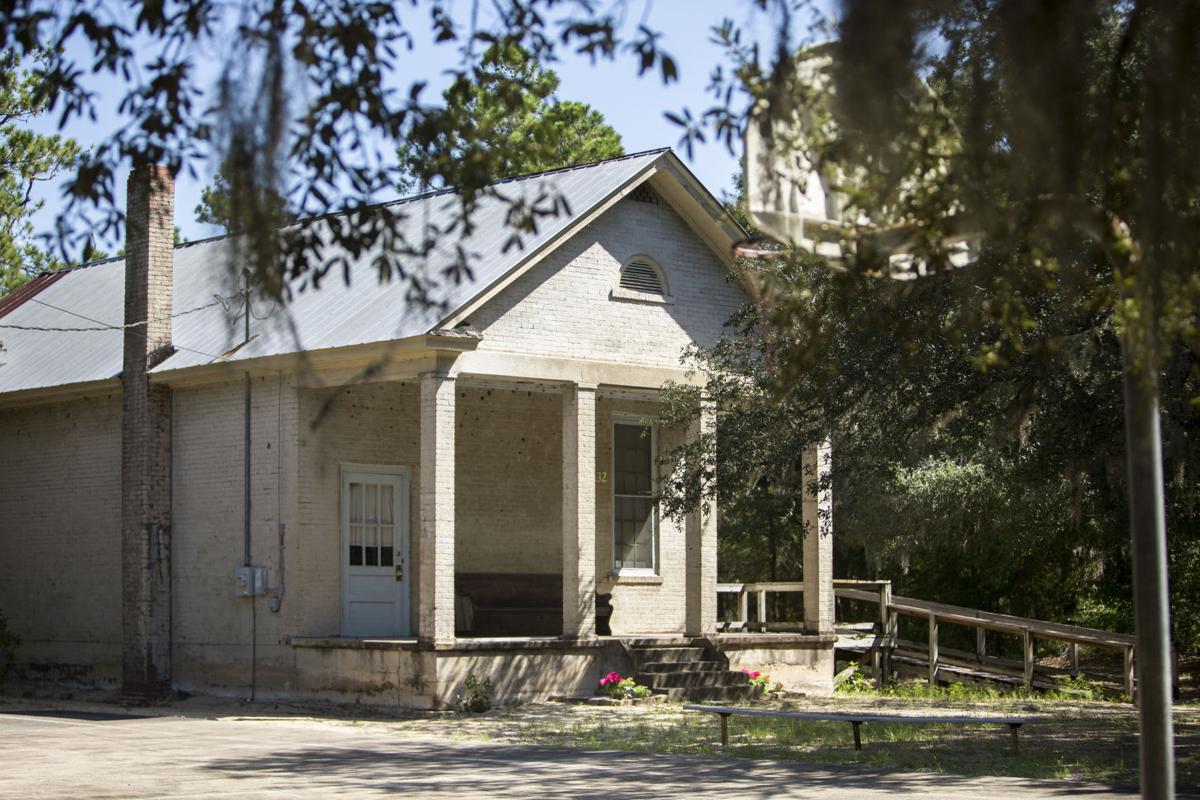 The former school house on Sandy Island has been turned into a community center, computer lab and library for residents Thursday August 29, 2019. Gavin McIntyre/ Staff 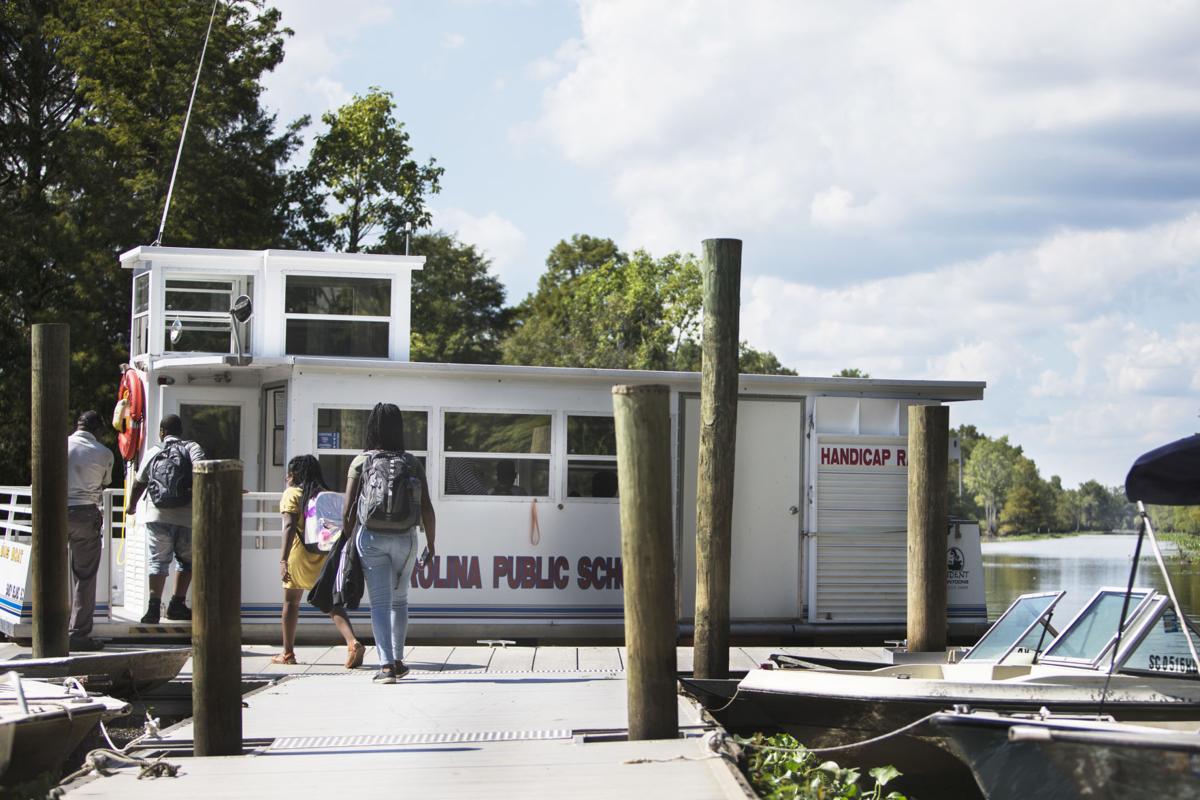 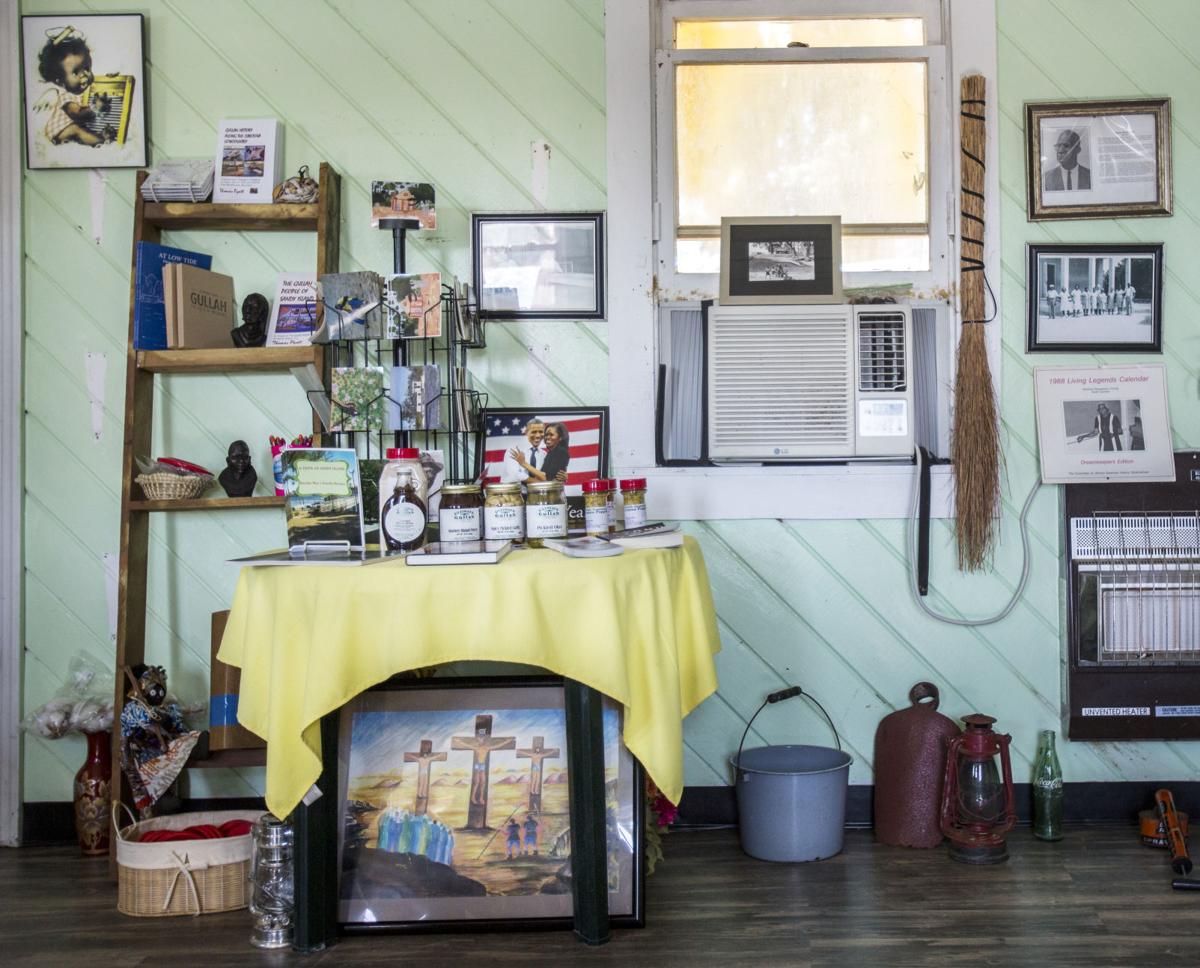 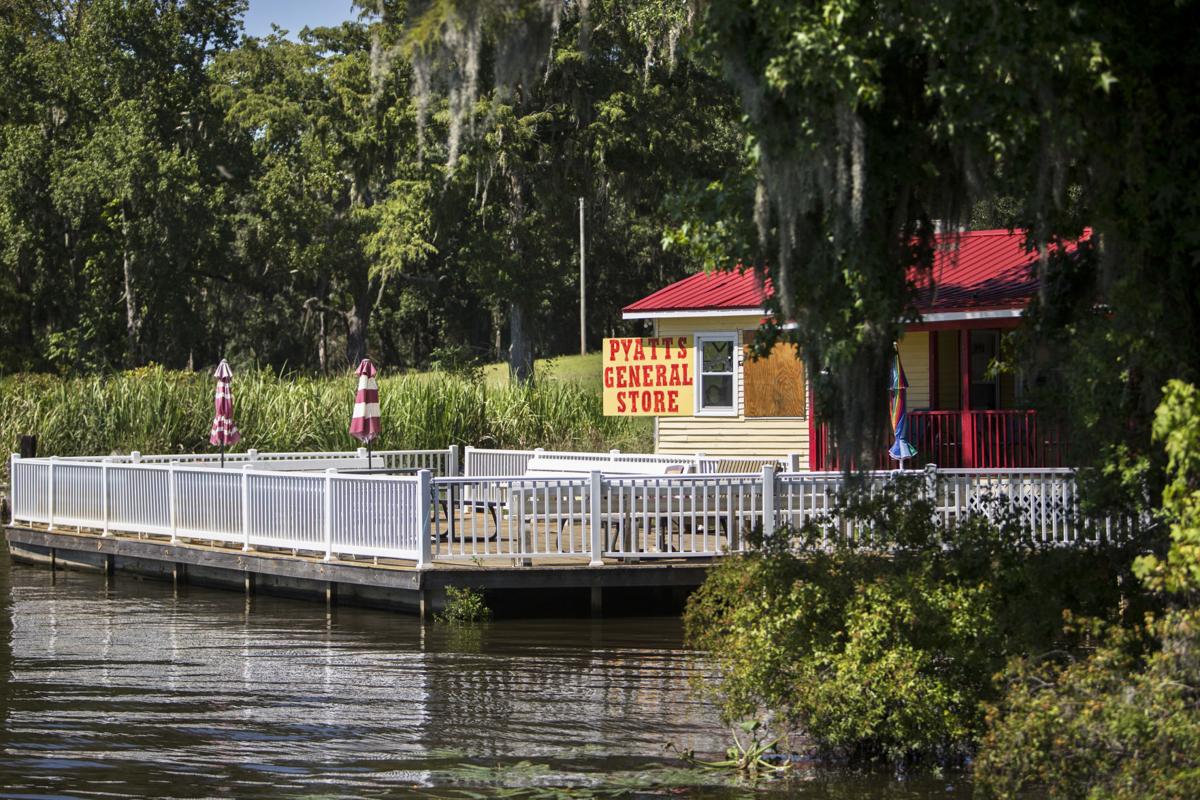 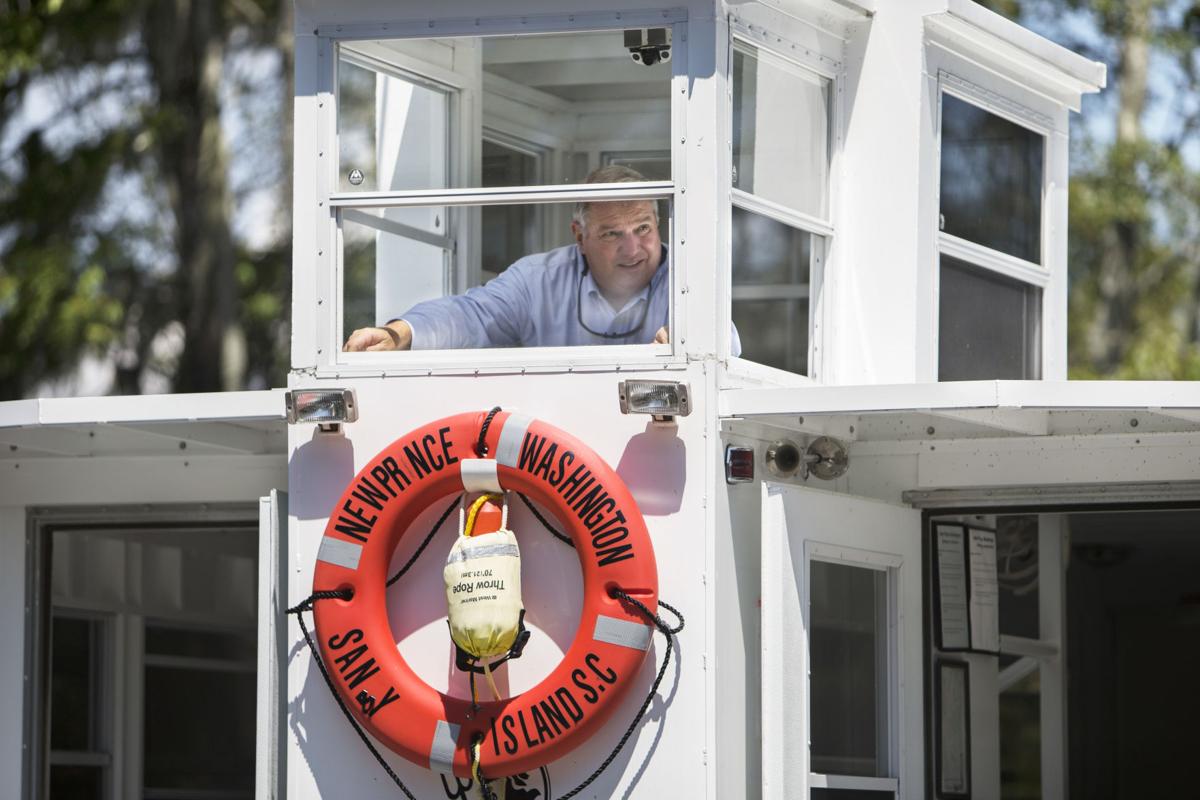 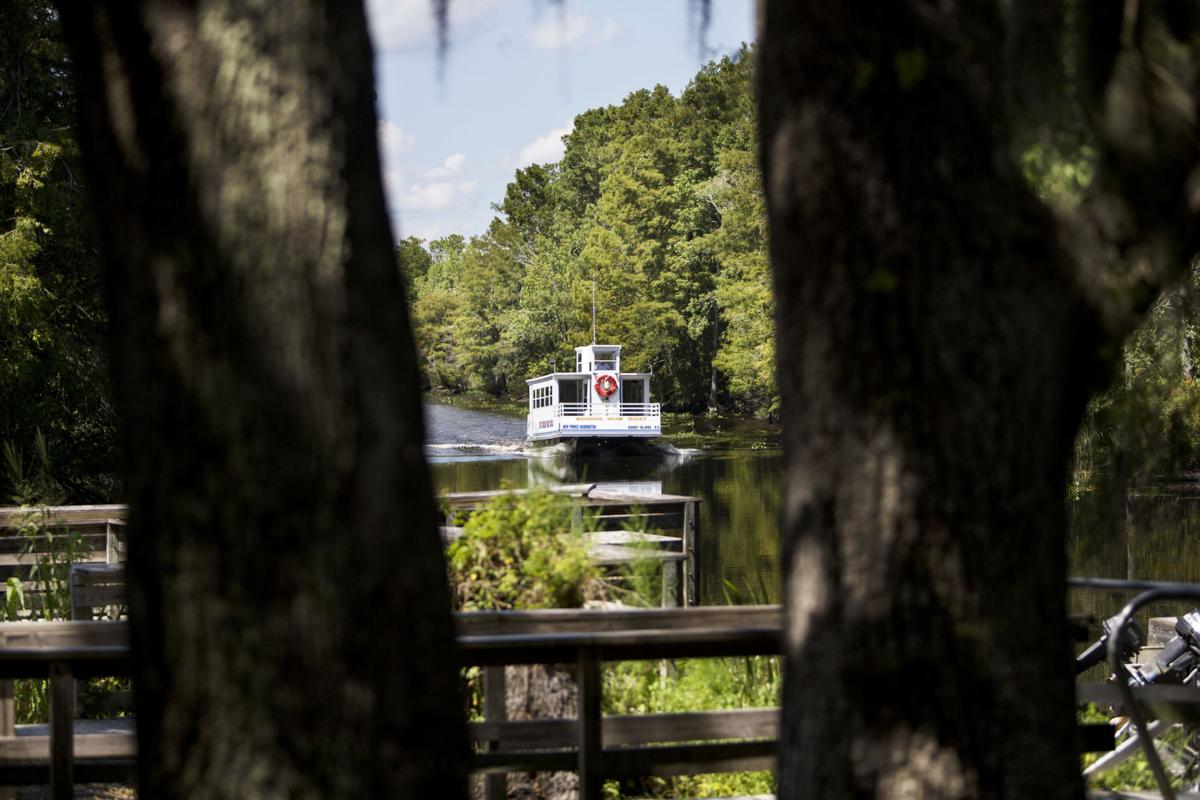 Johnny Weaver captains the boat, New Prince Washington, back to Sandy Island boat landing Thursday August 29, 2019, in Pawleys Island. Weaver works as a real estate broker but ferries residents back and forth to the island twice a day. Gavin McIntyre/ Staff

Rommy Pyatt pilots a boat back to Sandy Island for his tour business, Tours de Sandy Island, Thursday August 29, 2019. Pyatt grew up on Sandy Island and would take the school boat, Prince Washington, to class each day. Gavin McIntyre/ Staff

The former school house on Sandy Island has been turned into a community center, computer lab and library for residents Thursday August 29, 2019. Gavin McIntyre/ Staff

Johnny Weaver captains the boat, New Prince Washington, back to Sandy Island boat landing Thursday August 29, 2019, in Pawleys Island. Weaver works as a real estate broker but ferries residents back and forth to the island twice a day. Gavin McIntyre/ Staff

SANDY ISLAND — Around 6:15 a.m., a handful of bleary-eyed students board South Carolina’s only public school boat for an 8-minute journey across the Waccamaw River.

Spanish moss drips off the corridor of trees near the dock on the mainland. It's quiet. The still morning air is interrupted only by chirping crickets, a few bird calls and the hum of an occasional boat passing by.

The students get off the boat around 6:30 a.m. After leaving the dock, they board a school bus and head to class in Georgetown County schools.

In the afternoon, they do it all over again.

The students who ride the public school boat live on Sandy Island, a 12,000 acre island between the Waccamaw and Great Pee Dee rivers, partway between Georgetown and Myrtle Beach. They'll repeat this two-part journey each weekday during the school year.

To non-islanders, their journey may seem like an unusual, complicated way to get to school, but for many of the students the ride is just a part of everyday life in a unique South Carolina island community.

"They love it," said Kissie Smith, a Sandy Island resident and parent of two students who ride the school boat. "It's normal for them."

'Just needed to be done'

In the early 1960s, not long after the Brown v. Board of Education ruling outlawed racial segregation in schools across the country, the S.C. Department of Education purchased a school boat to transport Sandy Island's students to school on the mainland.

This boat remained in use for half a century, until community members and groups like the NAACP Georgetown County branch raised safety concerns.

"There was a diesel fuel leak, which is devastating to the cardiovascular system and kids with asthma and things of that nature. So that got their attention," said Marvin Neal, president of the NAACP Georgetown branch.

The state bought a new boat in 2015, shortly after Molly Spearman started as the state's new superintendent of education and began a state-wide effort to update antiquated public school buses.

"The community had reached out to us about the condition of the boat, and there were some concerns over diesel fumes and the heater not working and that kind of stuff," said Ryan Brown, a state Education Department spokesman. "It was just one of those things that needed to be done."

Spearman took office in January 2015 and about six months later the state spent almost $125,000 on a new boat and trailer, Brown said.

For island residents, many of whom are descended from formerly enslaved African-Americans, a safe method of crossing the river to the mainland is essential.

In February 2009, a small boat headed to the island capsized on a stormy night, killing three people and injuring an infant. The incident shook members of the Sandy Island community and renewed efforts to find a reliable, safe way on and off their island home.

In addition to transporting children to school, the new boat makes other trips to ferry residents to the mainland through an $80,000 grant from the state Department of Transportation.

Both pontoon-style boats were named after an influential Sandy Island community leader, Prince Washington. Known as the "mayor of Sandy Island," Washington captained the school boat for many years until his death in 1975.

He was the grandson of another influential Sandy Island leader, Phillip Washington, an emancipated slave who purchased 300 acres of land on the island and distributed it to other freed slaves. Many Sandy Island residents today are descendants of either Phillip Washington or others who helped found the community in the years after the Civil War.

'So quiet and peaceful'

It features a hardtop enclosed cabin, benches for passenger seating, an elevated captain’s seat, a heating system and a handicap ramp.

The Georgetown County School District employs three captains to operate the school boat. One captain is primarily responsible for taking students, while the other two help operate the ferry system that runs at other times. The boat is serviced at the county's bus shop, Davis said.

One captain, Johnny Weaver, is not a Sandy Island resident but lives nearby on Pawleys Island. He drives the boat in addition to his job as a real estate broker with The Litchfield Company.

"When I can be out here like this, especially in the morning, being on the water helps me get my head on straight before work," Weaver said. "It's so quiet and peaceful out there."

Some Sandy Island residents are wary of outsiders, including reporters. But others, such as Weaver, have gotten to know the residents and been welcomed into their community with open arms.

"Everyone on the island is so nice, and they have been so wonderful to me," Weaver said. "They look out for each other. They're friendly. And they've been here a long time."

Rommy Pyatt, 45, grew up on Sandy Island and rode the public school boat for many years.

"It was a part of our life growing up here on the island," Pyatt said. "If you lived on the island, you knew you were gonna take the school boat. If you missed the boat, you'd have to wait for your parents to come take you over."

Most of Sandy Island is a nature preserve, but dozens of residents live on its southeastern corner. They make up a close-knit community: Most were born and raised there.

John Brown,57, is among those who have lived on the island his entire life.

Robert Elliott, 62, is another. "All I want to do is stay on the island. I haven't ever thought about leaving," Elliott said. His mother also lived on the island all her life, until she passed away earlier this year at age 104.

Today, most islanders leave the island daily, either via a personal boat or through the school ferry system. Apart from homes, their community includes a small fire station, a community center, a church and a small general store. The rest is largely untouched, protected by The Nature Conservancy of South Carolina.

Pyatt remembered the freedom he had to explore the island growing up.

"We played, we had fun, but in my mind, because of what I saw on television, I said, 'There's gotta be some place better.' I wanted to find a better place," Pyatt said. "Finally, when I went into the military, I went around the world and realized there's no place like home."

Although the old school boat was retired in 2015, it still remains in use. Pyatt bought it for his business, Tours de Sandy Island.

Pyatt lives in Ladson as a member of the Air Force Reserve, but usually returns to the island a few times a week for his tour business and to visit family. Some weeks he's home more frequently. He's in the process of building a house on the island.

His mother, Beulah, opened a general store on the island in 1986. The store still operates today and sells books, snacks, postcards and artwork. She isn't originally from Sandy Island but moved to the island in 1971 after her marriage. She grew up nearby in Bucksport.

"The transportation was different, but the living is the same," she said. "People get together and everyone knows everybody. The only thing that was different is that I could drive from my door. Here, I had to get in a boat to go back and forth before I could get to my vehicle."

Change has come slowly to Sandy Island, and that's fine for many who live there.

Despite its proximity to the bright lights of Myrtle Beach, the island didn't get electricity until 1965. Its expanse of undeveloped land is reminiscent of an earlier time — one without nearby subdivisions or shopping centers.

This way of life was threatened in the 1990s when a controversial bridge was proposed that would have connected the island to the mainland. The idea sparked concern from some residents who thought a major bridge would only increase development pressures on their island.

Seen this way, the school boat is more than just a method of transportation: It's a symbol of Sandy Island itself.

The ferry system keeps the mainland easily accessible for islanders, but Sandy Island largely remains an enigma to outsiders, more separate and independent than many places.

The boat recently survived the winds and rain of Hurricane Dorian with no damage. That's good news for the students and the islanders who hope it lasts for many more decades to come.