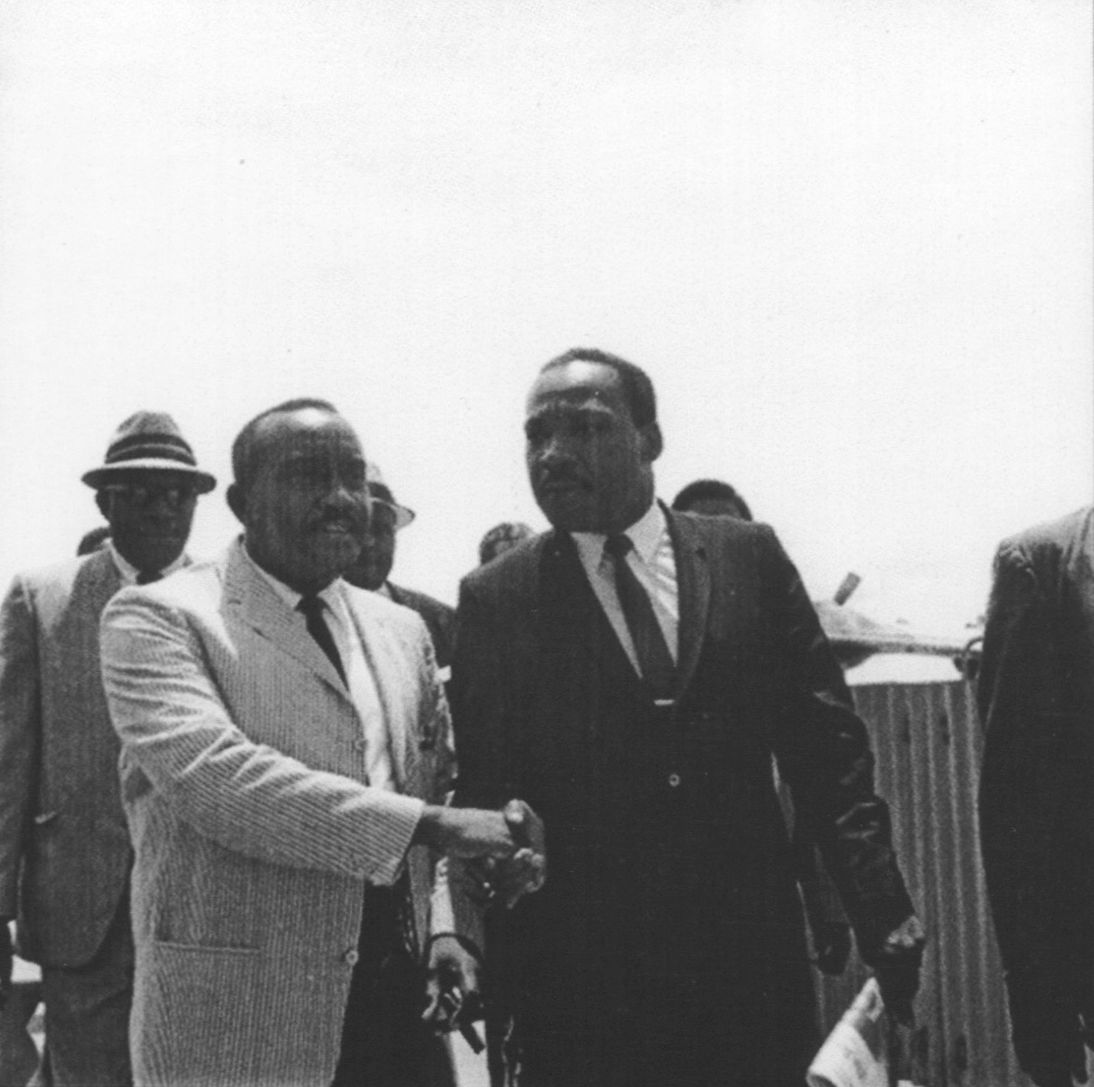 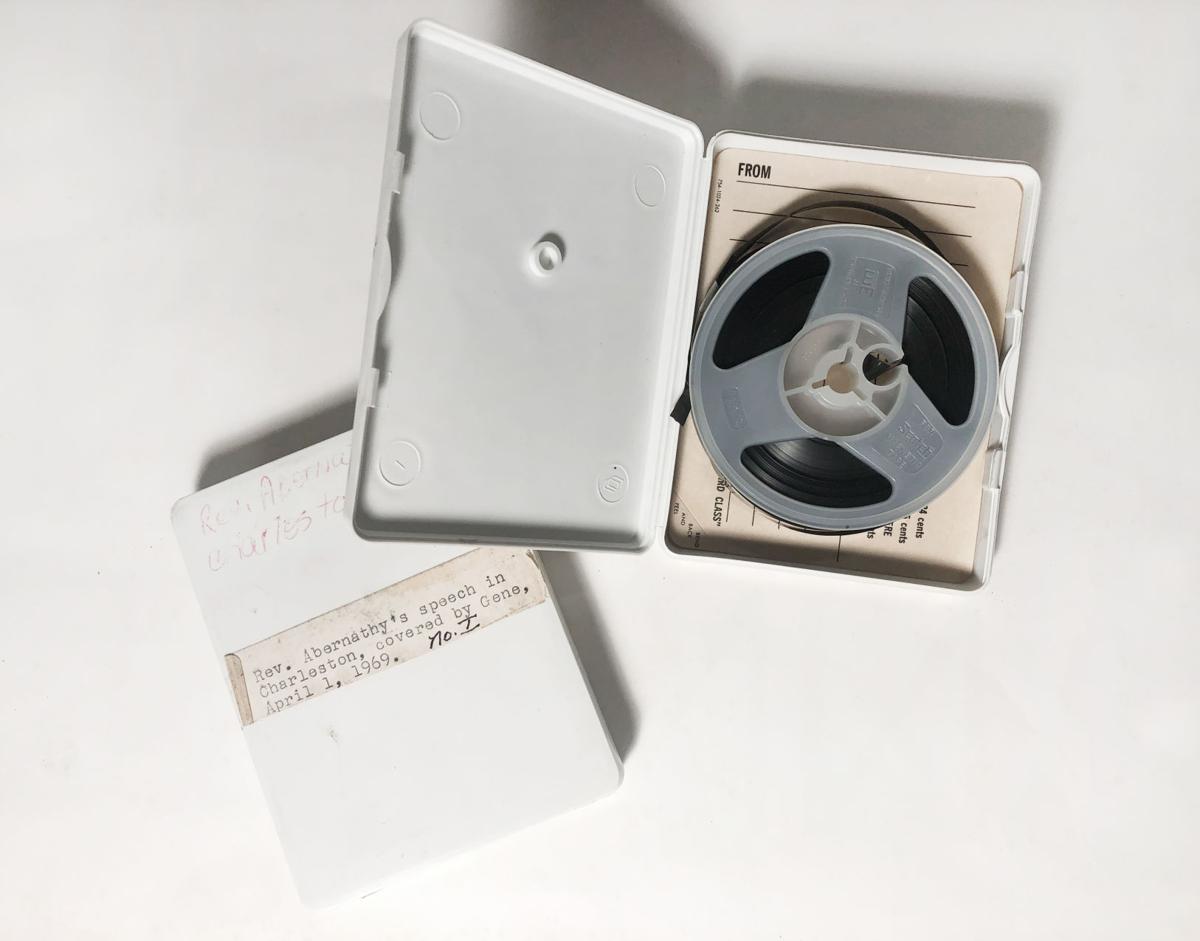 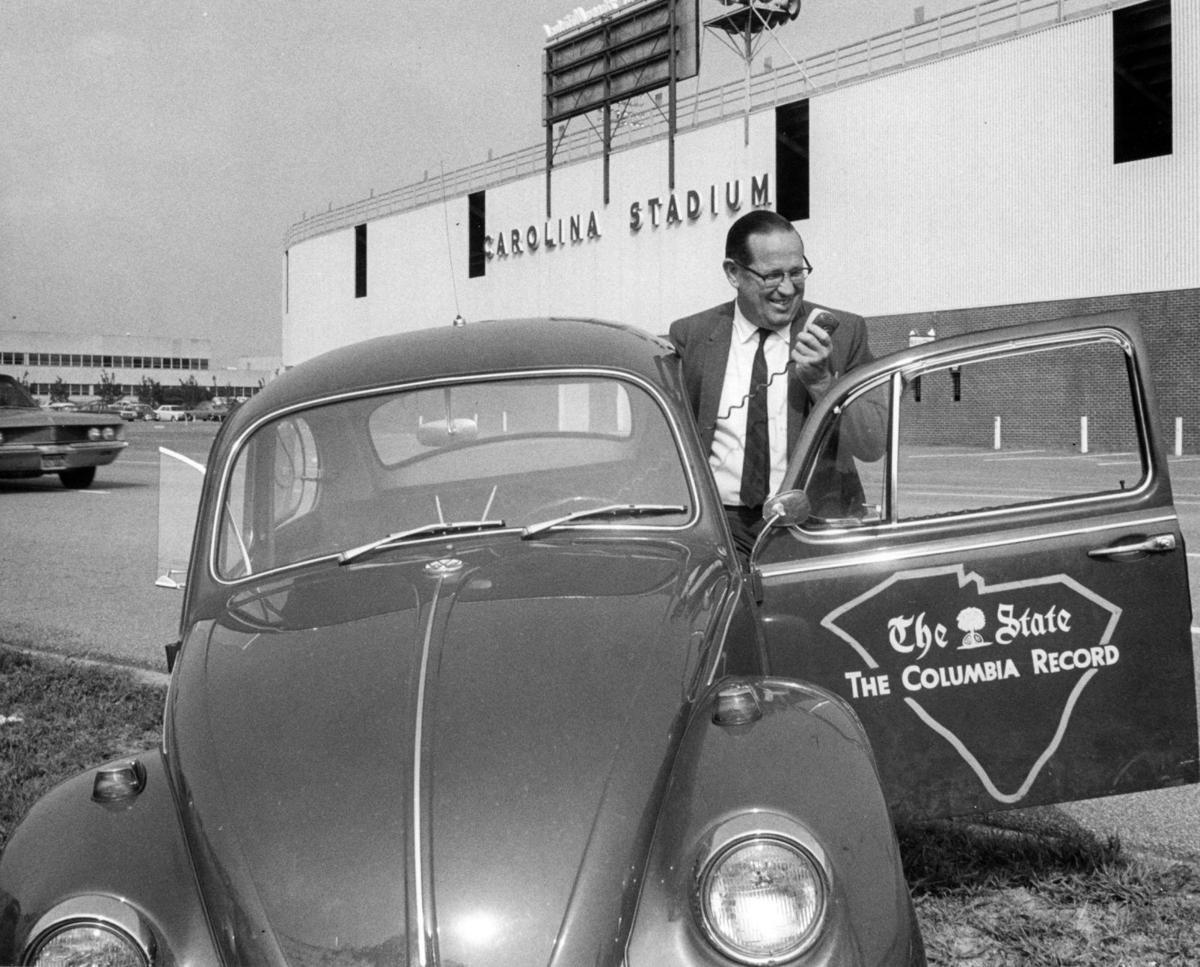 Eugene Sloan was a journalist at The State. He died in 1969. 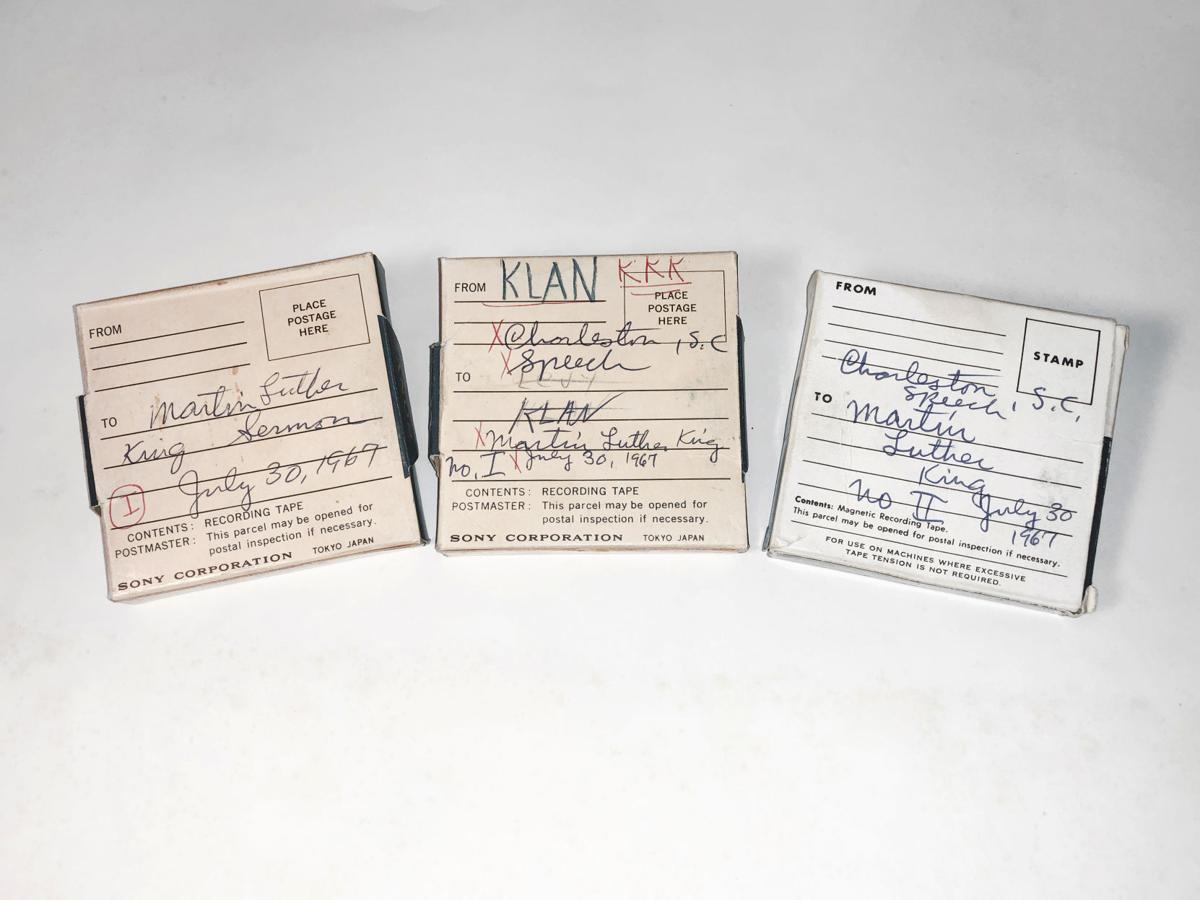 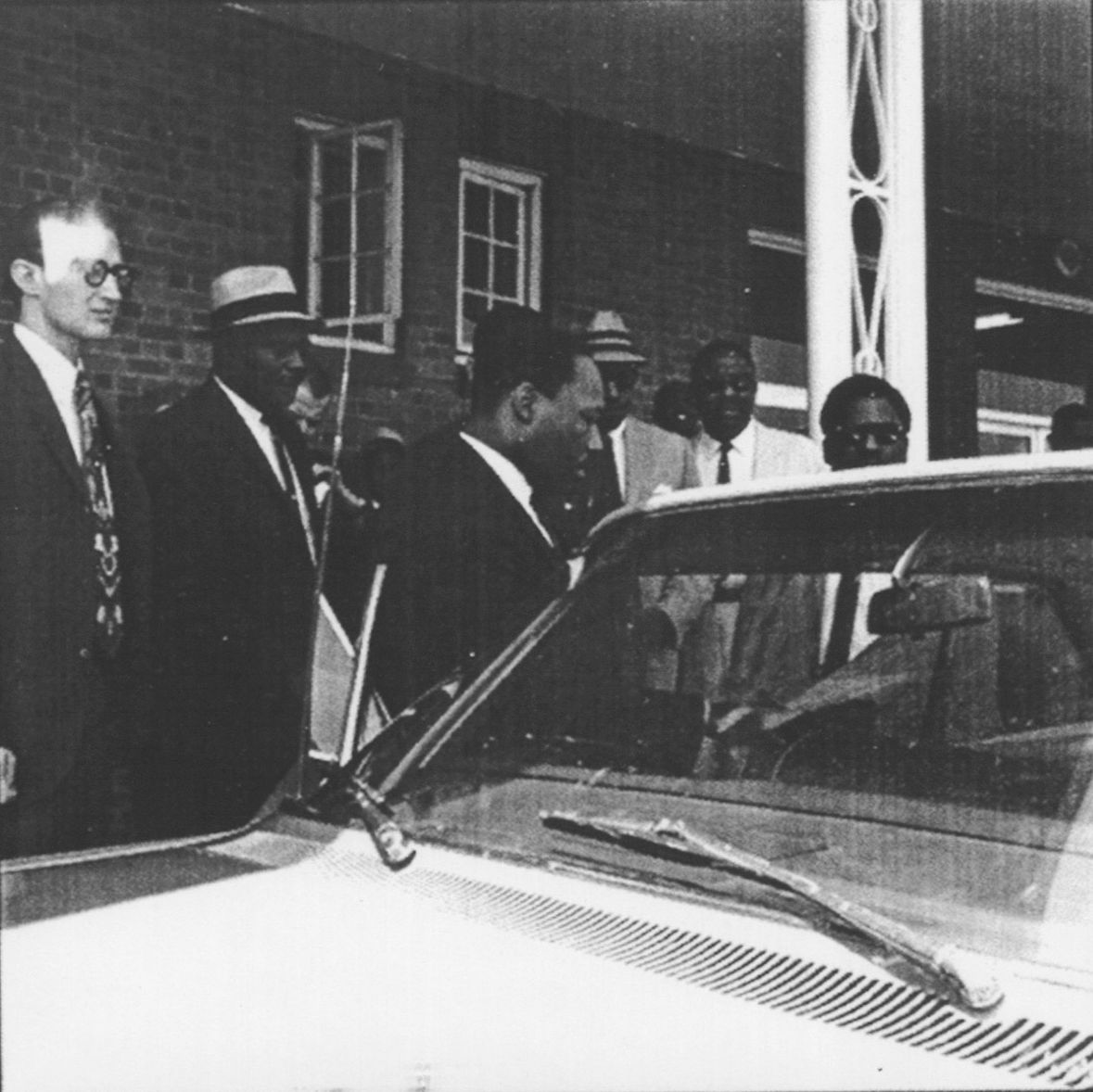 Martin Luther King in Charleston in 1967. 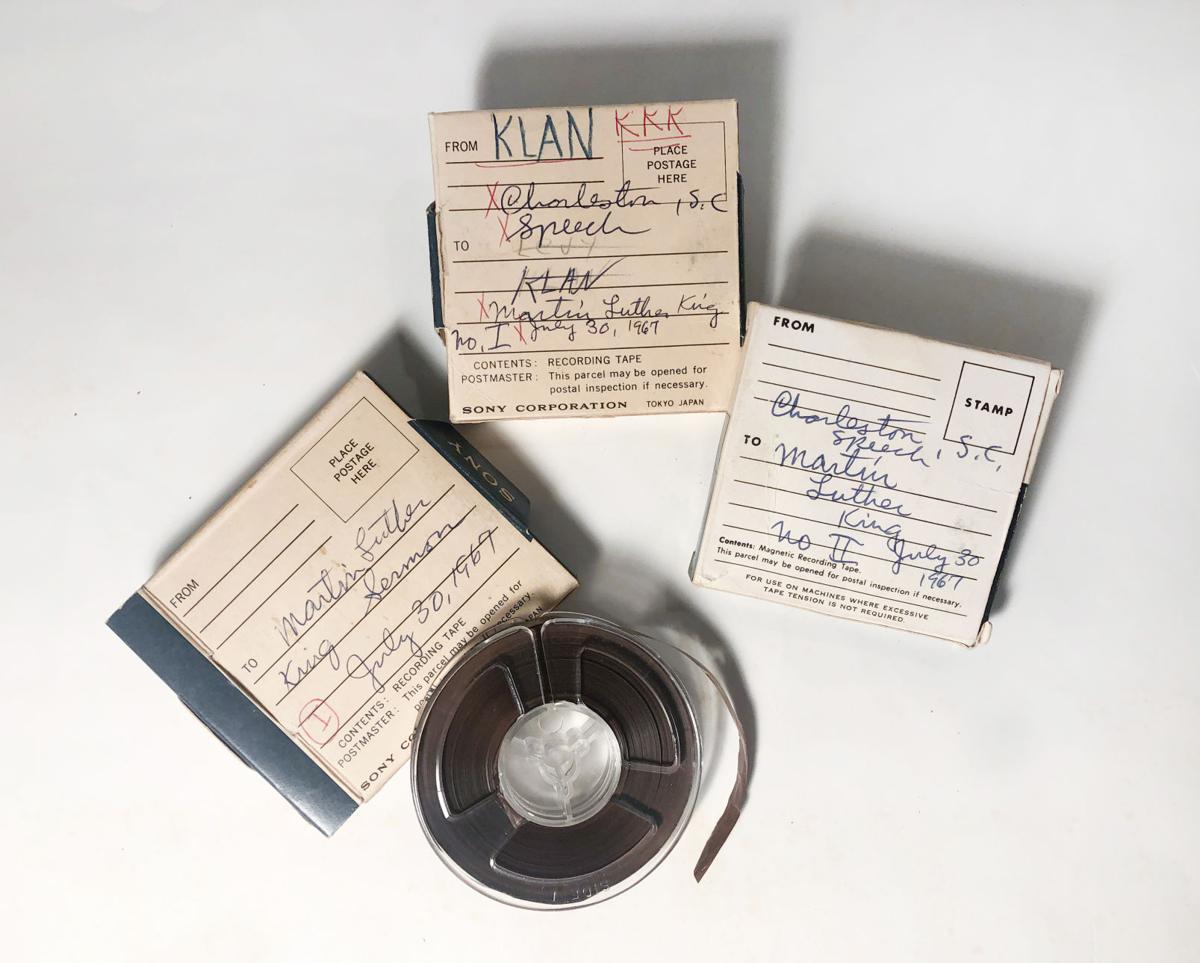 Tapes containing audio of Martin Luther King's 1967 Charleston speech, and of the Ku Klux Klan rally the night before.

Eugene Sloan was a journalist at The State. He died in 1969.

Martin Luther King in Charleston in 1967.

Tapes containing audio of Martin Luther King's 1967 Charleston speech, and of the Ku Klux Klan rally the night before.

They had hoped the collection of civil rights era material — including audio recordings of Martin Luther King Jr. and Ralph Abernathy — would end up in Charleston.

And maybe the historical treasure trove will find a permanent home here, eventually. But for now, it’s in the hands of a buyer who paid a total of $68,000 for it at auction Thursday night in New York City.

The Eugene B. Sloan Civil Rights Collection, auctioned by Guernsey’s at the behest of Sloan’s daughters Laura and Mary, included tapes their father recorded of King’s public address at County Hall in Charleston on July 30, 1967.

Also in the mix, a tape of Abernathy’s speech on April 1, 1969, during the Hospital Worker’s Strike in Charleston. Abernathy took over as president of the Southern Christian Leadership Conference after King's death a year earlier.

Sloan, a reporter for The State newspaper at the time, also attended a Ku Klux Klan rally the night before King’s speech and recorded Grand Dragon Robert Scoggin calling for King’s assassination.

“He said some of most hateful and horrible things, and you can hear horns and applause (expressing) approval,” Laura Crosby, a Summerville resident, said. “You can hear him say he ought to be shot.”

King, instead, was condemning violence in his speech, which came in the immediate wake of the Detroit riots that year. The civil rights leader beseeched the crowd not to burn down their communities but to “build, baby, build.”

His visit to the Holy City came during the Black Power phase of the freedom movement, which was characterized, in part, by a push among African Americans toward self-sufficiency and self-protection and by a maturing worldview that placed the black struggle in a global context.

It also was a time of increasing strife, both within a fraying civil rights movement and among those fearful of Black Power ideology.

King had been introduced that day by Esau Jenkins of Johns Island, whose voice also was captured by Sloan. King acknowledges Jenkins’ years of effort, including the founding of Freedom Schools in South Carolina, alternative places where blacks could study and prepare for social activism.

Other items in the collection include photographs of King and his entourage, the tapes and recording equipment Sloan used, a picture of Sloan with his Volkswagen Beetle, photographs of the Klan rally, and Sloan’s Hasselblad medium-format camera.

Laura Crosby said she and her sister insisted the complete collection should be sold intact. They were certain of its historic value, she said.

They were proud of their father’s career accomplishments and understood well the precious cargo he kept at home. The sisters witnessed Sloan’s charitable acts, such as the time he donated an enormous cache of photographs to the University of South Carolina.

It was clear that he thought highly of King and appreciated the importance of the civil rights movement, Laura Crosby said. Sloan died of a heart attack on Easter Day 1969.

“My sister and I have been trying to do something with this collection of audios for the last 12 years,” Laura Crosby said. “I cannot tell you how disappointed we are that someone in Charleston didn’t purchase the collection.”

They approached various institutions but could not reach an agreement, she said.

“The quality (or the tapes) is great. Abernathy’s speech is really one of the most wonderful speeches I’ve ever heard. There is lots of cheering and applause, and Abernathy was very funny. Those audios tell a grand story about the civil rights movement in South Carolina.”

The Avery Research Center at the College of Charleston hoped to acquire the material, but could not obtain information from an independent appraisal so could not bid, according to college spokesman Mike Robertson. And the International African American Museum was offered the chance to purchase the archive but could not properly store and preserve it, according to IAAM curator Joy Bivins.

Bobby Donaldson, historian at the University of South Carolina, said his institution also showed interest but it was difficult to determine the collection’s value and difficult (as it often is under such circumstances) to secure funding. He considered the sale at auction a good first step.

“I’m excited that the tapes have been preserved, because the content of the material really sheds light on the context of the civil rights struggle in Charleston in the 1960s,” he said. It shows that there was still work to be done after the passage of the 1964 Civil Rights Act and 1965 Voting Rights Act. And it showed that local efforts, such as the work of Esau Jenkins and Septima Clark, were essential to the wider success of the movement, Donaldson said.

“The tape (of King’s speech) includes the voice of Esau Jenkins, which I’ve never heard before,” Donaldson said. And it connects to a video fragment of King in the possession of the University of South Carolina, enabling a more complete understanding of this event. “Not many people have heard the whole speech.”

Just as remarkable is the inclusion of the Klan material, he said.

“It shows that King was under constant threat and attack, particularly as he escalates the movement toward issues of poverty and (adopts) an anti-war position. ... Not only do you have the major voice of the movement, but you are also reminded of the pronounced opposition that he and others experienced, and you are reminded that violence also snuffs out his life, and yet the movement persisted.”

That's why it's important for scholars, journalists and others to have access to this material, he said.

Guernsey’s president Arlan Ettinger said the sisters’ concern for the material was evident, and the auction house looked to find a buyer whose heart is in the right place.

“We make efforts to try as best as possible to see that things end up in places that are meaningful,” Ettinger said.

The Rosa Parks collection he brokered a few years ago ended up at the Library of Congress. Jerry Garcia’s “Wolf” guitar, originally sold at auction by Guernsey’s for $800,000, was returned to the auction house as a donation so that it could be sold again, with all proceeds going to the Southern Poverty Law Center.

“We will do our best to gently exert pressure on this buyer (of the Sloan collection) to consider in some way seeing that this gets to Charleston,” Ettinger said, unable to name the individual because of privacy concerns and refusing to make any promises.

The collection was part of an auction that included artist Marc Chagall’s Holocaust letters and documents about the future state of Israel. Ettinger said it was easy to shoehorn the civil rights material into this inventory because of the common themes of justice.

Laura Crosby said she and her sister drove the collection to Washington, D.C., then boarded a train to New York City, just so they could keep the precious cargo in their sight.

“I said a prayer before the auction that (the objects) would be purchased by somebody who would appreciate the collection, research the collection ... and use all of the words (uttered by King and Abernathy) to make the world a better place,” Crosby said.

“I was ecstatic,” Crosby said. And relieved. “It’s been somewhat of a burden taking care of this.”