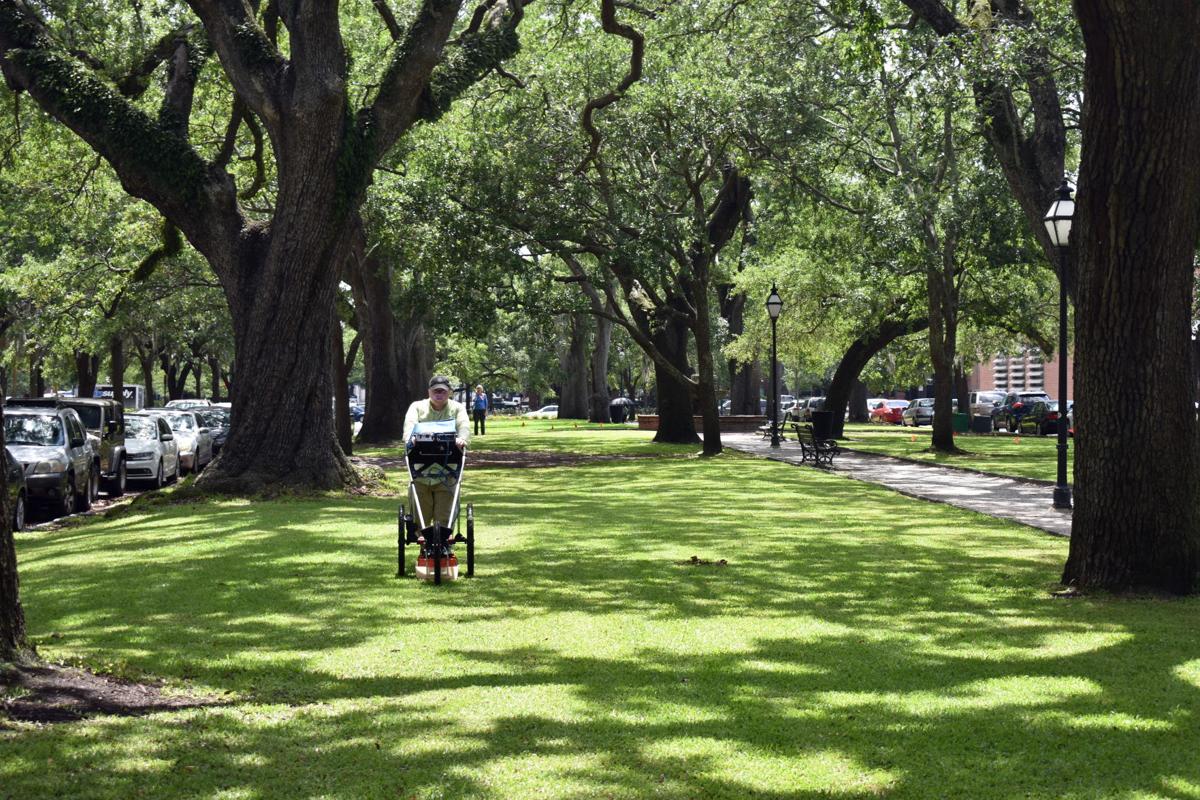 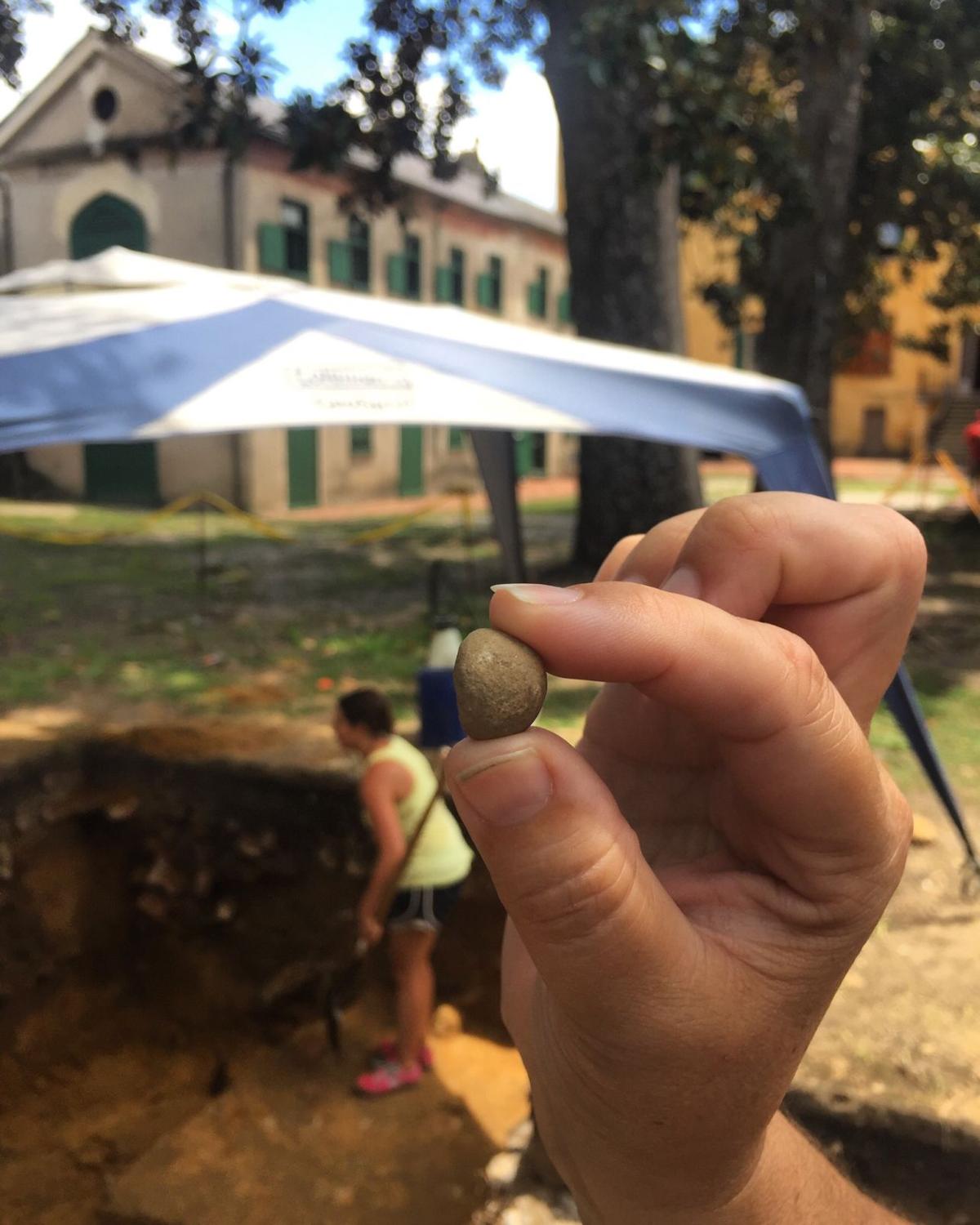 This lead musket ball discovered by archaeologists in 2017 indicated that the yard behind the Aiken-Rhett House once was a Revolutionary War trench used by British troops to take Charleston in 1780. Further ground radar confirms that. Provided 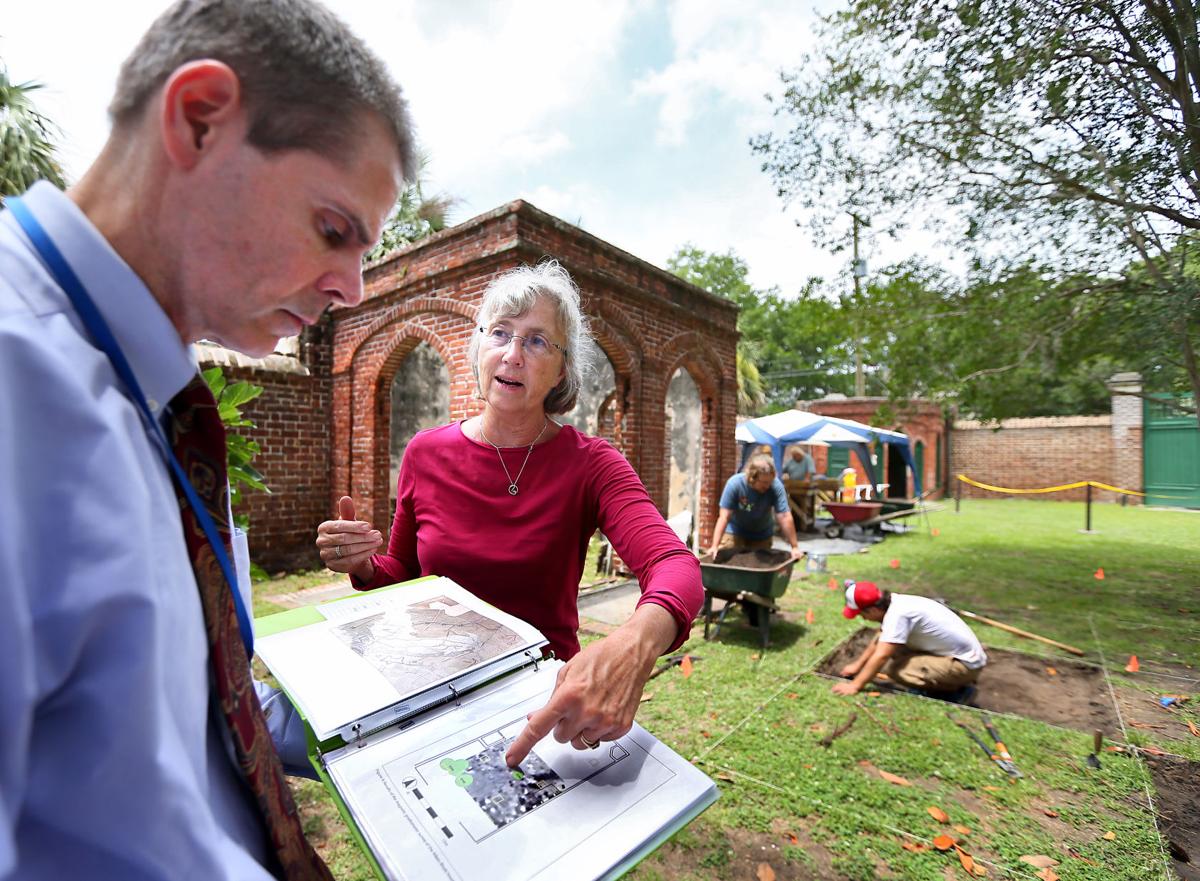 Charleston Museum director Carl Borick and its curator of historical archaeology Martha Zierden confer during a 2017 dig behind the Aiken-Rhett house, where they found signs of siege lines that British soldiers dug in the spring of 1780. Monday, June 12, 2017. File/Wade Spees/Staff 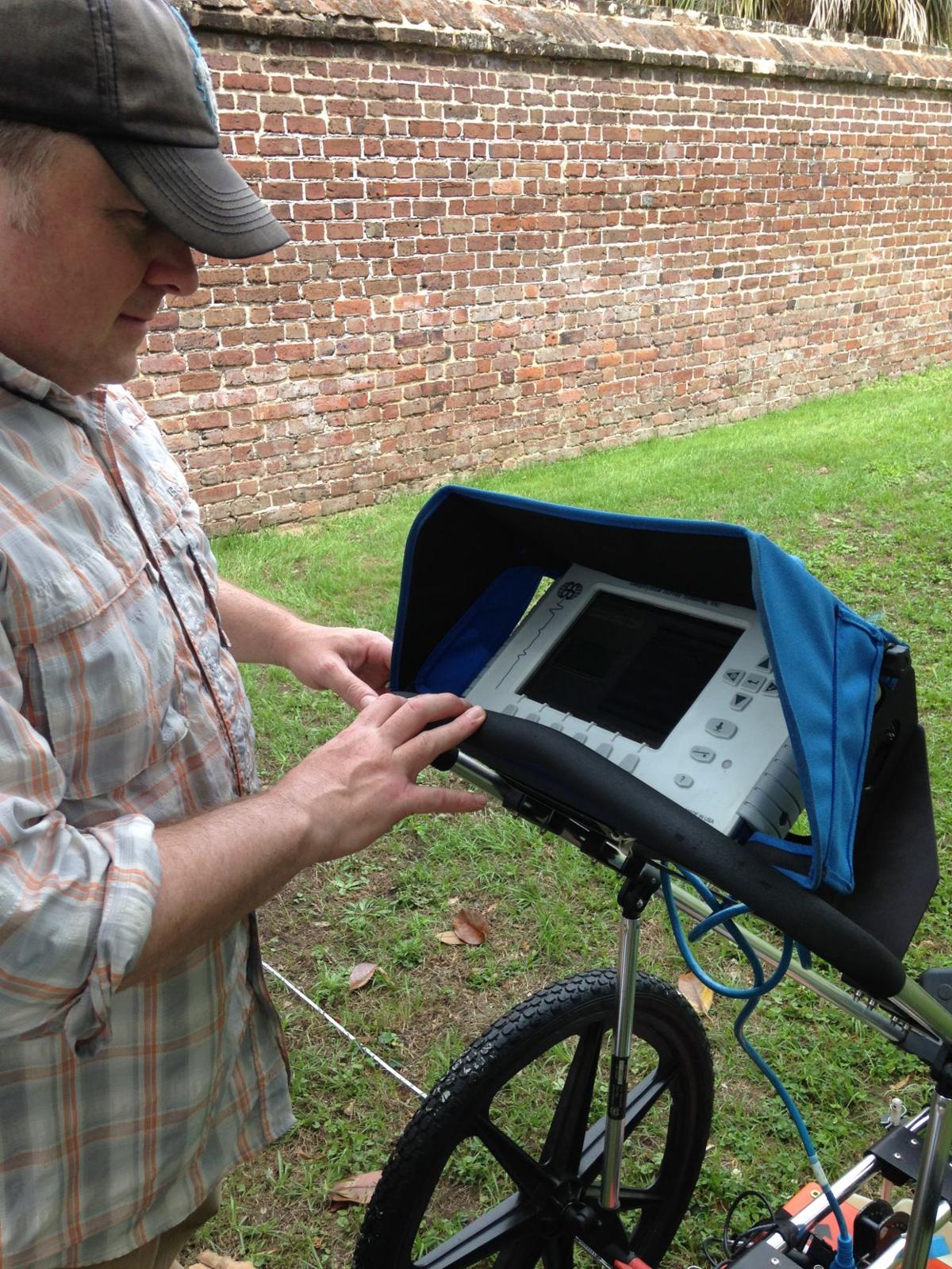 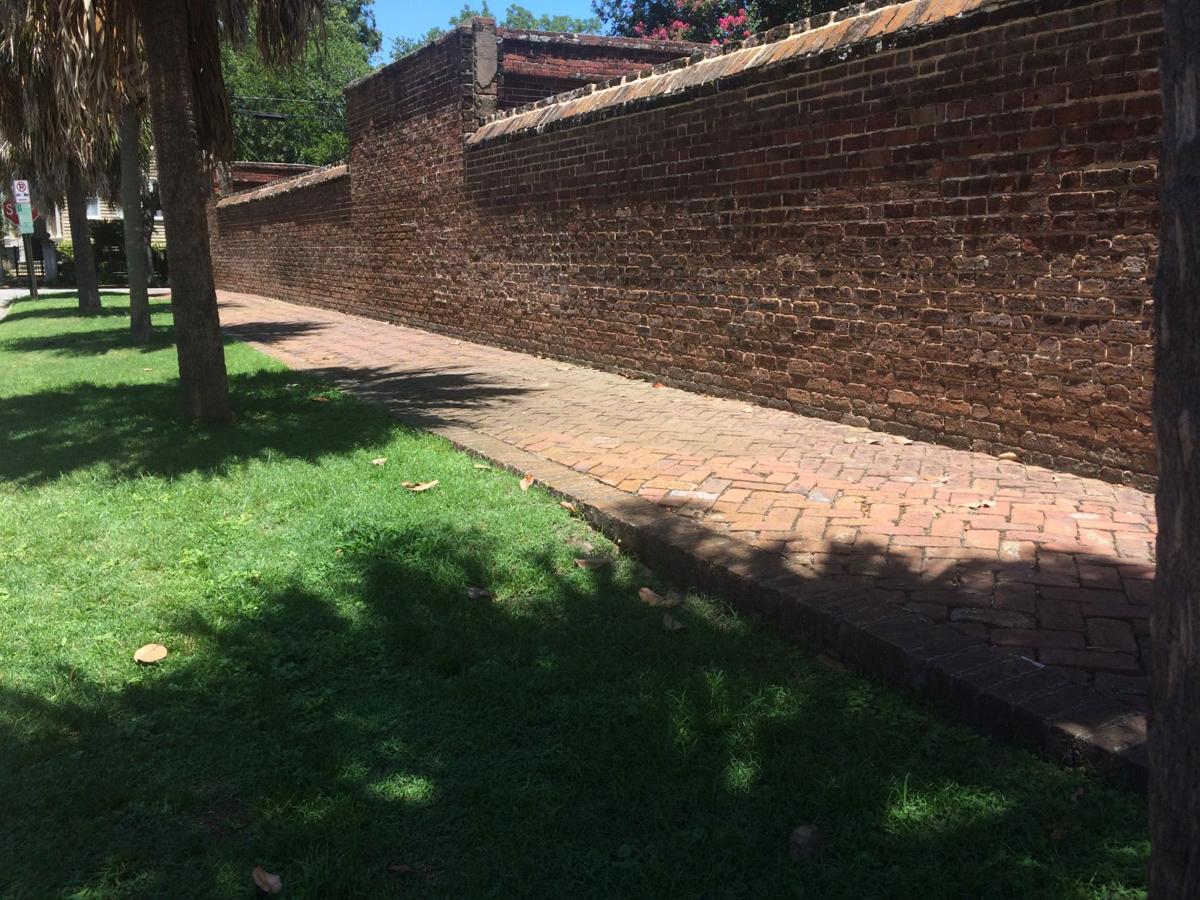 The sidewalk along Elizabeth Street has a noticeable dip (lower right, in shade beside the sidewalk), that could stem from an old Revolutionary War era trench dug in the area. Robert Behre/Staff 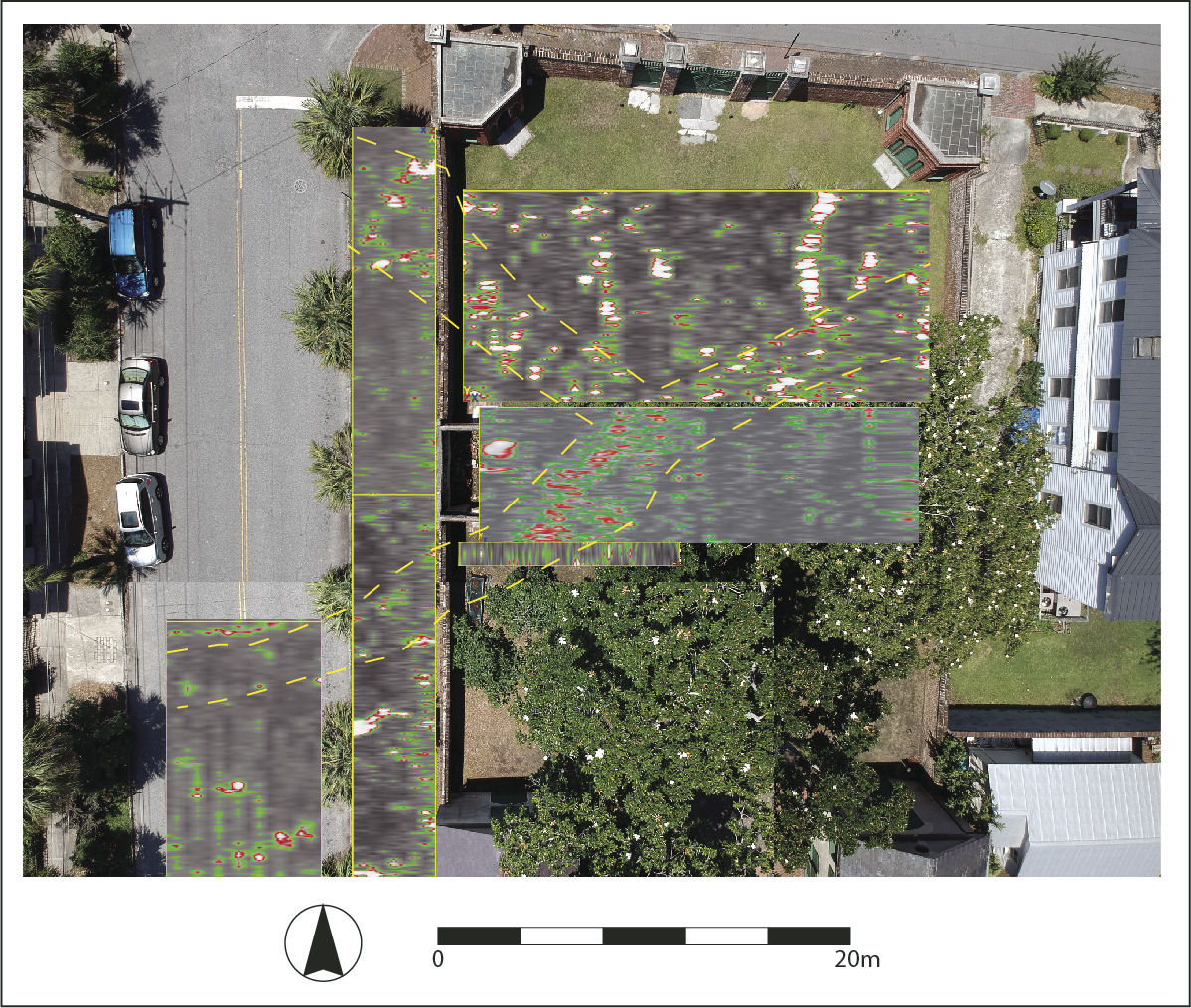 This aerial image of the rear yard at the Aiken Rhett House indicates where ground penetrating radar picked up patterns similar to siege lines from Revolutionary War era maps of the area. Jon Marcoux/Provided

When a lead musket ball was unearthed behind the Aiken Rhett House last year, experts called it a sure sign that their archaeological dig had found long-lost remnants of Charleston's greatest Revolutionary War battle.

Others were more cautious, noting that it was just one artifact, certainly an encouraging sign that a siege line might have been found, but not conclusive proof.

Marcoux is a professor with Salve Regina University's Noreen Stonor Drexel Cultural and Historic Preservation program, and he has worked several historical sites dating back to prehistoric times. His survey showed still more evidence of the lines, which British dug as protection for their soldiers trying to take the city's main fortification in what today is Marion Square.

In fact, the most intriguing part of Marcoux's findings may involve a grassy section next to the sidewalk on Elizabeth Street, just below Mary Street. The spot has sunk 6 to 8 inches, possibly because it once was a siege trench.

Carl Borick directs the Charleston Museum but also is the city’s leading scholar on the Siege of Charleston, the 1780 Revolutionary War battle in which the British wrested control of the South's largest city. His work with maps from the period raised the possibility that the siege lines could run through the Aiken Rhett property, a theory that fueled last year's dig.

Martha Zierden, a museum archaeologist, helped oversee that dig. She noted the trench site included some brick fill from the house's renovation in the 1830s. That's almost a half century after records show that the siege trenches were filled in.

But Zierden said if the initial fill had sunk in the yard, it would have made sense that the area would have been refilled and leveled out years later, possibly with leftover bricks from the renovation work.

That kind of fix might not have been done along the nearby sidewalk.

"It's hard to believe a feature from the late 18th century is causing that slumping, but it lines up and it's in the right place," she said. "That little place seems to be the above-ground evidence."

Borick said he already plans to include the dip in the sidewalk on his future Revolutionary War walking tours. It's the only visible sign other than the tabby fragment in Marion Square that's all that's left of the Americans' once imposing hornwork defense.

"This has always been my Holy Grail, finding some evidence of the siege lines," Borick said. "Finding more archaeological evidence would be great as far as what we know about the Siege of Charleston and the Revolutionary War in Charleston and its general history."

The new ground-penetrating radar images show differences in soils and fill material, anything that can speed up or slow down the energy reflected back. Marcoux said the GPR images can reveal differences about 3 to 5 feet below the surface in Charleston, which has relatively looser soils. In other areas, a GPR scan can reveal things 10 to 12 feet down.

Marcoux's survey found the siege lines extended into Elizabeth Street and even farther into Wragg Mall, a linear park flanked by Meeting, Ann and Elizabeth streets.

A future dig in Wragg Square would need the city's permission, but it could be particularly revealing. Aside from evidence of a few utility lines, the park has been relatively undisturbed since its creation around 1800, less than two decades after the Revolutionary War.

During the war, the city did not extend much beyond Boundary Street, known today as Calhoun Street.

The British Navy was famously turned back here in 1776 at the Battle of Sullivan's Island — now celebrated every June 28 as "Carolina Day" — but Charleston would fall four years later. That's when Sir Henry Clinton and about 8,000 British troops returned from land, not sea.

They crossed the Ashley River and progressed down the peninsula, where they dug about 1½ miles of trenches between modern-day Spring Street and Marion Square. In May 1780, the British prevailed, capturing more than 3,000 patriot troops and dealing the patriots one of their largest setbacks in the war.

South Carolina had been divided between loyalists and patriots, and the British victory in Charleston also unleashed a civil war across the state, which would see more armed conflicts than any other state in the colonies during the war.

Perhaps because the siege was a loss, not a triumph, for the prevailing side, there's been relatively less focus on it. Also, what then was the battlefield gradually became part of downtown Charleston as the Antebellum city sprawled northward.

The 2017 archaeological dig at the Aiken Rhett House was done by a joint field school run by the museum and the College of Charleston. It's too soon to say if their next field school will focus here, but Marcoux's work opens a lot of possible doors, Zierden said.

"I’m kind of excited about the prospect,' Borick said. "The museum and the archaeology department is definitely interested pursing this further.”

For not much money, researchers could do more ground-penetrating radar work to keep following the signatures of the siege lines. And there could also be more digging.

"The archaeological signature (from last year's dig) was 90 percent right but a little more complicated than that," she added. "There was always a little bit of wanting to know more and wanting to be sure."

With a little further archaeology, historians could be much more comfortable in just a few years that they finally have found evidence of the battle — evidence that could lead to still more understanding of how the siege unfolded.

"In my personal opinion, I don’t think we have the final nail in the coffin yet," Marcoux said. "We have a couple so far, but if field work continues, I have a feeling at the conclusion we would have definitive proof one way or the other.”

The Citadel will kick off its new online military history program by hosting a military historian who just delved into the Battle of Sullivan's Island as part of a trilogy on the Revolutionary War.