Two of South Carolina’s top prosecutors reignited their long-simmering feud Thursday over plans to hand outside lawyers a $75 million payday for helping the state sue the federal government for failing to dispose of unwanted plutonium.

In a searing letter, 1st Circuit Solicitor David Pascoe urged Attorney General Alan Wilson to reconsider the planned payout, calling it an "unconscionable" sum. Pascoe argued the move “reeks of political cronyism” because it would benefit Wilson's political allies and a firm the attorney general used to work for.

The $75 million payment is slated to come out of a $600 million settlement reached between South Carolina and the U.S. Department of Energy after a years-long fight over a stockpile of weapons-grade plutonium near Aiken that the state wants removed. The settlement gives the U.S. government more time to get the material out; South Carolina may not be able to sue until the 2040s.

Pascoe, a prominent critic of Wilson, argues that the attorney general doesn’t have the authority to divvy up the money. Under state law, he says, the state Legislature has control over the entire $600 million and should be allowed to decide how to spend it. Wilson’s office contends that the attorney general is well within his power to hire outside counsel — and to pay them.

Pascoe’s objections echo concerns brought last week by Republican Gov. Henry McMaster, who suggested the settlement had less to do with the success of the state’s legal strategy and more to do with the “zealous advocacy and coordination” of its political leaders.

South Carolina’s top leaders have long sought to force the Energy Department to either process the plutonium or move it somewhere else. Members of the state’s congressional delegation, including U.S. Sen. Lindsey Graham, tried to use their influence over the federal budget and, more recently, their tight relationships with the Trump administration to force the issue.

The advocacy won them a 2018 meeting at the White House with President Donald Trump, Wilson, McMaster, Graham and other members of the state’s delegation. The governor credited the push with getting the administration’s attention.

Wilson has dismissed concerns about the size of the payments to the outside lawyers, saying it’s a consequence of securing the largest settlement in state history. In a letter responding to McMaster last week, Wilson said the lawyers’ deal was signed in 2016, “long before we believed the settlement was going to be this high.” The deal was updated last year.

“I expect to be criticized for this agreement, but leaders have to be willing to make tough decisions regardless of the political consequences,” Wilson wrote in his letter to the governor.

Wilson has also argued that the agreement between his office and the outside firms follows a mold the state has used since McMaster was attorney general. The bigger the settlement, the smaller the percentage the lawyers get. McMaster came up with that fee schedule after his predecessor caught flack for allowing an $82.5 million payout to the law firms that represented South Carolina in a national tobacco settlement.

But, for the plutonium litigation, Wilson agreed to bump the percentage back up if the legal fight got tangled. And it did.

According the lawyers’ agreement, the firms were entitled to a bigger cut if the case was appealed and if the issue spilled into other jurisdictions. The plutonium issue was heard before three district courts, and South Carolina pursued an appeal all the way to the Supreme Court, which decided not to hear the case. 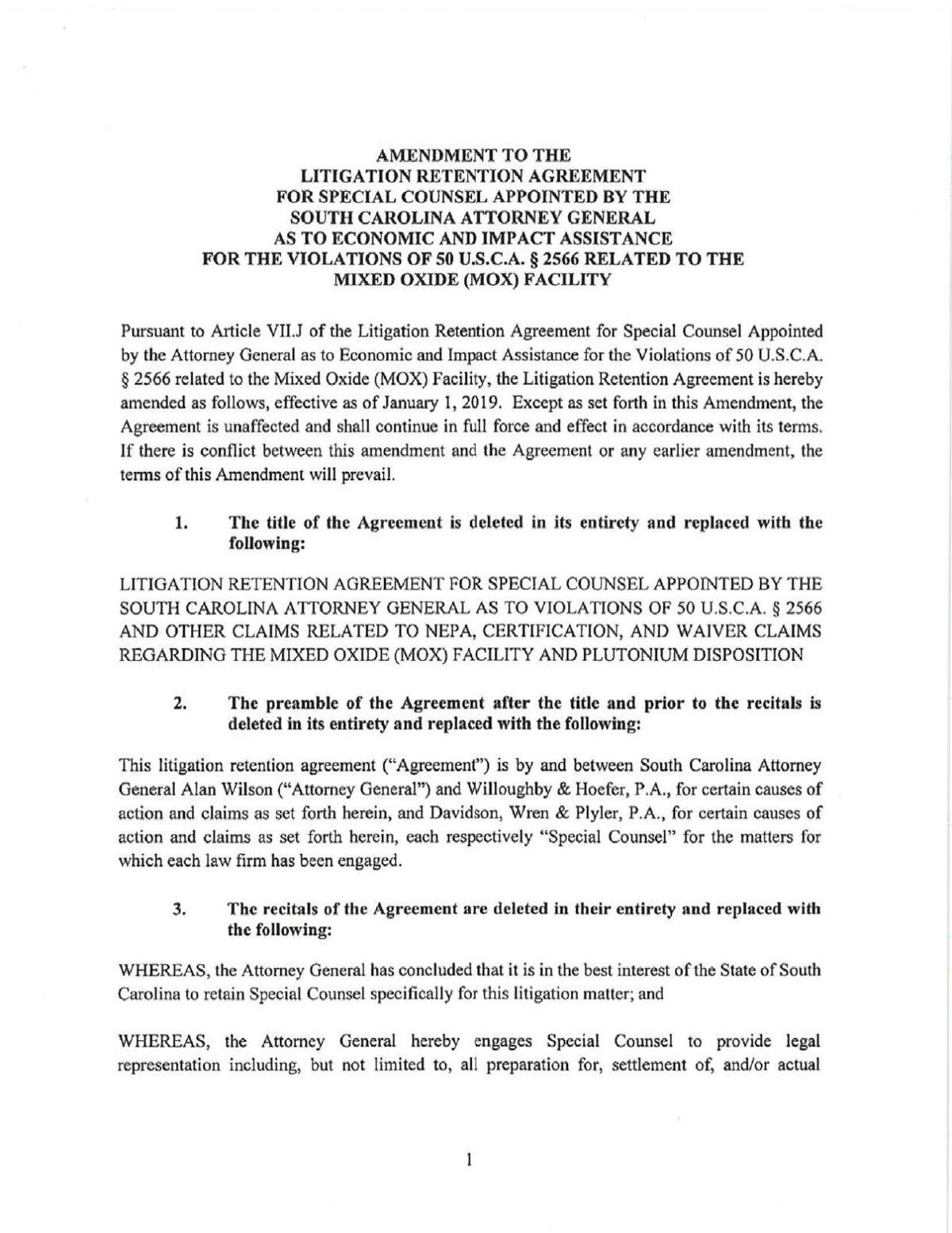 Pascoe and Wilson have found themselves frequently at odds since clashing — bitterly at times — during the recent Statehouse corruption probe.

Wilson appointed Pascoe to oversee the case as special prosecutor, but later tried to boot him from the inquiry after accusing him of being “tainted” in his zeal to pursue indictments connected to influence-peddling. Pascoe, an Orangeburg Democrat, countered by accusing the Republican attorney general of meddling in a case in which he had recused himself because of a conflict.

More recently, Pascoe and Wilson tangled over an opinion from the Attorney General’s Office that determined the Confederate flag hanging in The Citadel’s Summerall Chapel is protected by the Statehouse’s Heritage Act. Pascoe, a Citadel graduate, called the opinion a “flawed” defense of a racist symbol in a July letter to the school’s president.

In his letter blasting the plutonium settlement, Pascoe went after Wilson using the same legal argument the attorney general employed against him to criticize settlements Pascoe secured with companies named in the corruption probe. Wilson argued that Pascoe lacked the authority to forge agreements with the companies that allowed them to sidestep prosecution in exchange for financial payments to support the investigation.

That money, Wilson argued, belonged in the state’s general fund. Now, Pascoe argues the plutonium settlement money does too.

“This is public money,” Pascoe said. “It belongs to the Citizens of South Carolina.”

Pascoe argues the sum is “unconscionable” because it’s more than the state’s prosecutors and public defenders receive in annual funding combined.

The $75 million will be split between two firms in Columbia: Willoughby & Hoefer, and Davidson, Wren and DeMasters. A spokesman for the attorney general said his office hasn’t gotten a breakdown of how the payment will be split up. Representatives of the firms did not respond to requests for comment Thursday.

Mitch Willoughby, a founding partner in Willoughby & Hoefer, was Wilson’s former boss before he became attorney general. He also was chairman of a Lexington bank that loaned Wilson $250,000 days before a filing deadline in the 2010 race for attorney general.

The loan drastically inflated Wilson’s campaign war chest, giving him the appearance of financial strength that helped him edge out two opponents in the GOP primary that year. Willoughby has never responded to Post and Courier inquiries about the loan and it remains unclear what, if any, help he provided to Wilson in securing it.

Willoughby went on to earn $7 million representing the state in a lawsuit accusing a New York bank of mismanaging South Carolina’s pension investments. Work on that lawsuit began during McMaster’s term as attorney general, and Wilson, a Lexington Republican, has said he had little involvement in the case after he took office.

Between the time Wilson took over in 2011 and 2017, Willoughby’s firm earned nearly $1.2 million representing the attorney’s general’s office in three other matters — making the firm the second-highest earner among outside counsels hired for hourly-fee cases, according to figures provided by Wilson’s office.

Wilson’s office said Willoughby & Hoefer was hired because the firm approached the state with a plan for suing the federal government and a pre-written lawsuit. It said Wilson and former Gov. Nikki Haley decided in 2016 that the state should pursue the case. The deal was updated last year because the scope of the case had grown.

“They both agreed that Willoughby & Hoefer should handle the case because they had already done all the legwork,” spokesman Robert Kittle said. “The outside firms assumed all the financial risk up front with no risk to the state if they lose the case.”

Ben Mustian, another outside lawyer involved in the case, also worked for Willoughby’s firm before starting his own practice. Mustian is the son-in-law of Richard Quinn, an influential political consultant who was a central figure in the Statehouse corruption probe. Quinn’s firm worked on Wilson’s campaigns for attorney general.

Wilson’s office says Mustian is not going to be directly paid through the settlement because he no longer works for Willoughby.

"There is absolutely no cronyism involved in this case," Kittle said.

Mustian is married to Quinn's daughter, Rebecca, who served as the chief financial officer and bookkeeper for her father's consulting firm. She continued to do work for Wilson's campaign after the attorney general cut ties with her father, who was indicted in the probe.

Sen. Dick Harpootlian, a Columbia Democrat, said he wants to know more about the terms of lawyers' fee schedule and the appropriateness of the settlement as a whole.

"I think this is something that bears examination by the Senate," he said.

Sen. Tom Davis, a Beaufort Republican, said it’s difficult to say whether the fees are fair without knowing how much time the firms put into the work, the experience they brought to the case and the novelty of the strategy they devised. The case has both legal and political components, pitting the state against the federal government — “a superior foe with unlimited resources,” he said.

“Do these attorneys have a track record of going up against the federal government and compelling them to make a settlement?” he asked. “Do they have that heft and credibility?”