More than three years after a local interfaith advocacy group called for an independent audit of the Charleston Police Department, the results are in.

The audit found racial disparities in key areas like traffic stops and uses of force, and it depicted an organization in need of sweeping reforms and investment in training and leadership development. The preliminary findings, which took eight months to complete, pointed to a need for better data collection so a more detailed analysis of the department's use of force could be done. Auditors also found a need for better training of upper-echelon staff.

City Council voted in December to hire Virginia-based firm CNA for $158,556. Auditors examined data from 2014-2018 in five areas: traffic stops; use of force; the department's complaint process; community-oriented policing; and recruitment, hiring, promotions and personnel practices. A preliminary report was released Monday with the final report scheduled for release after a month-long public comment period in October.

Charleston Police Chief Luther Reynolds said the audit shows the department has an opportunity to improve.

"We embrace the findings of this audit," Reynolds said. "This is the beginning of the process."

Editorial: How Charleston police can win back public trust, keep us safer

In a joint statement, Reynolds and Mayor John Tecklenburg called the preliminary report a critical step in the department's efforts to protect and serve the community with dignity and respect.

Among the audit's key findings were racial disparities in officers' use of force and in traffic stops.

The department's Traffic Division is made up of 20 officers, all of whom are male and all but two of whom are white, the audit found.

As auditors collected public comments and input, they noted several concerns that officers were stopping drivers for seemingly minor violations and that they believed officers exhibited racial bias in their stops.

Some community members of color reported being stopped several times in particular neighborhoods while white motorists said they had never been stopped in the same neighborhoods, the report said.

One year after Charleston apologized for slavery, a broader conversation has begun

Auditors also found signs of racial disparities in officer use of force incidents, but the existing data made it difficult for auditors to drill down too far.

Sixty-one percent of people that officers used force against were black, while 37 percent were white, the report said.

Black civilians were found to be involved in officer use of force incidents at nearly three times the rate expected based on their percentage of the population. White residents were involved in half as many incidents as expected.

When looking at complaints, the audit found inconsistencies in the department's processes.

The audit found 89 complaints and 187 allegations filed by 92 different people. The most common allegations included an officer improperly stopping, detaining or arresting an individual, bias-based profiling and an officer acting inappropriately. It also noted that eight complaints made in 2018 did not appear to have been resolved.

Reynolds said that those eight complaints were handled at the unit-level and not documented.

Members of the public sometimes might feel like they can't file a complaint because they are afraid it won't get investigated or they might face some kind of retribution for doing so, the chief said.

"We want as many complaints as possible," Reynolds said.

Sixty-three percent of those who filed complaints were black and 36 percent were white, the audit found. Most in-house complaints for an officer failing to attend court or another assignment ended with a written reprimand. The auditors recommend the department create a “disciplinary matrix” so discipline is consistent and equitable.

Residents expressed a lack of confidence in the department’s complaint process, the report said, adding if they do hear back about their complaint, it’s usually months later.

The department has introduced training on combating bias, civil rights history and community policing, but it doesn’t offer them on an annual basis, the audit found.

The audit team said it couldn’t do an in-depth analysis of the city's recruitment and hiring because the department didn’t collect that data in a comprehensive manner.

The auditing team found that the department’s job description for police officers doesn’t “accurately describe their roles and responsibilities” and the city lacks a training plan, specifically for retraining officers in crisis intervention.

“The 108 officers trained in CIT have not received recertification training since they first received CIT training,” the audit found.

In addition to lacking specialized training in crisis events, promoted officers often are not trained unless they seek guidance from senior officers, the audit found.

The auditing team found that the department doesn’t have an established recruiting and hiring plan and recommended the department partner with the Palmetto State Police Officers Association.

Dot Scott, NAACP Charleston Branch President, said she hasn’t had a chance to read through the report but praised Mayor Tecklenburg and Chief Reynolds for embracing it.

“I just feel a sense of relief that I know, at least I feel quite certain, that we have someone in this police chief that really wants to do the right thing for all the citizens,” Scott said. 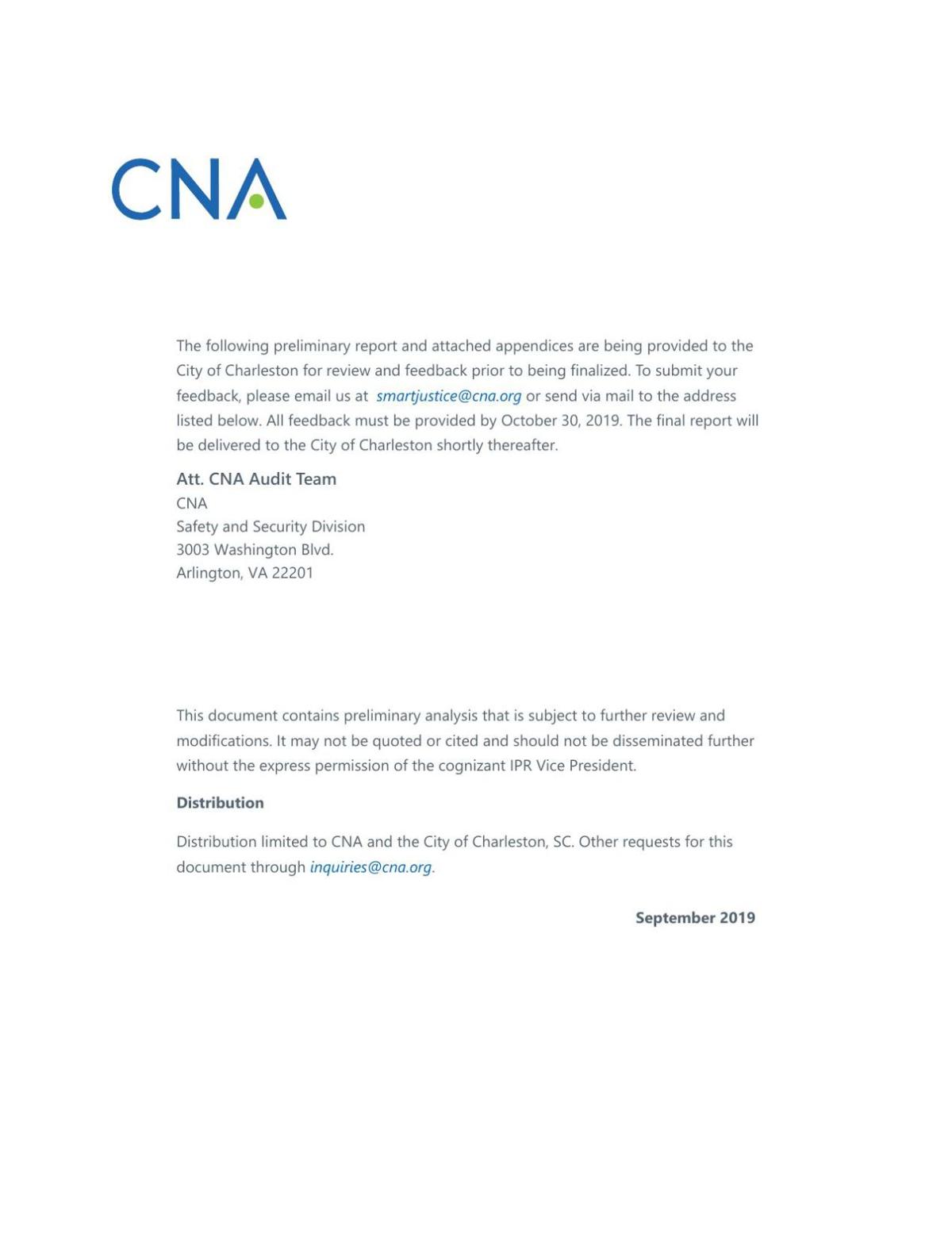