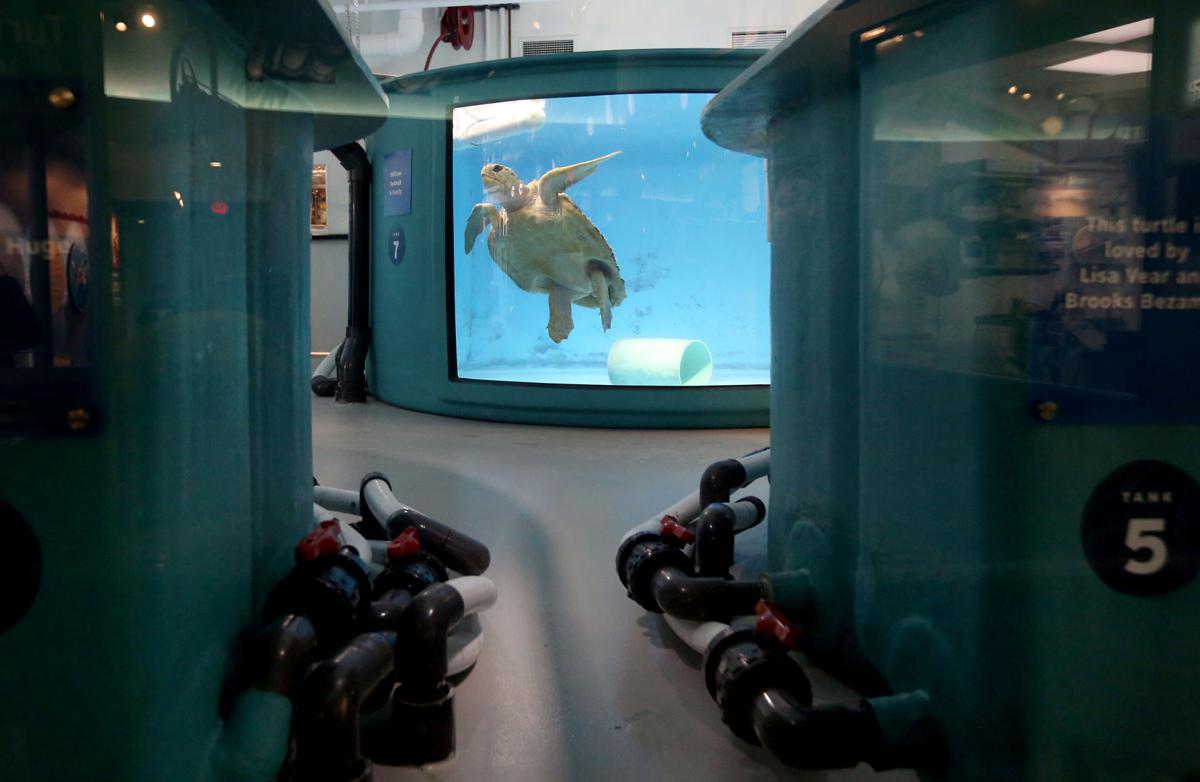 A recovering sea turtle at the South Carolina Aquarium's Sea Turtle Care Center in Charleston swims into view. Sea turtles are among marine animals most affected by by plastic debris. File/Grace Beahm Alford/Staff 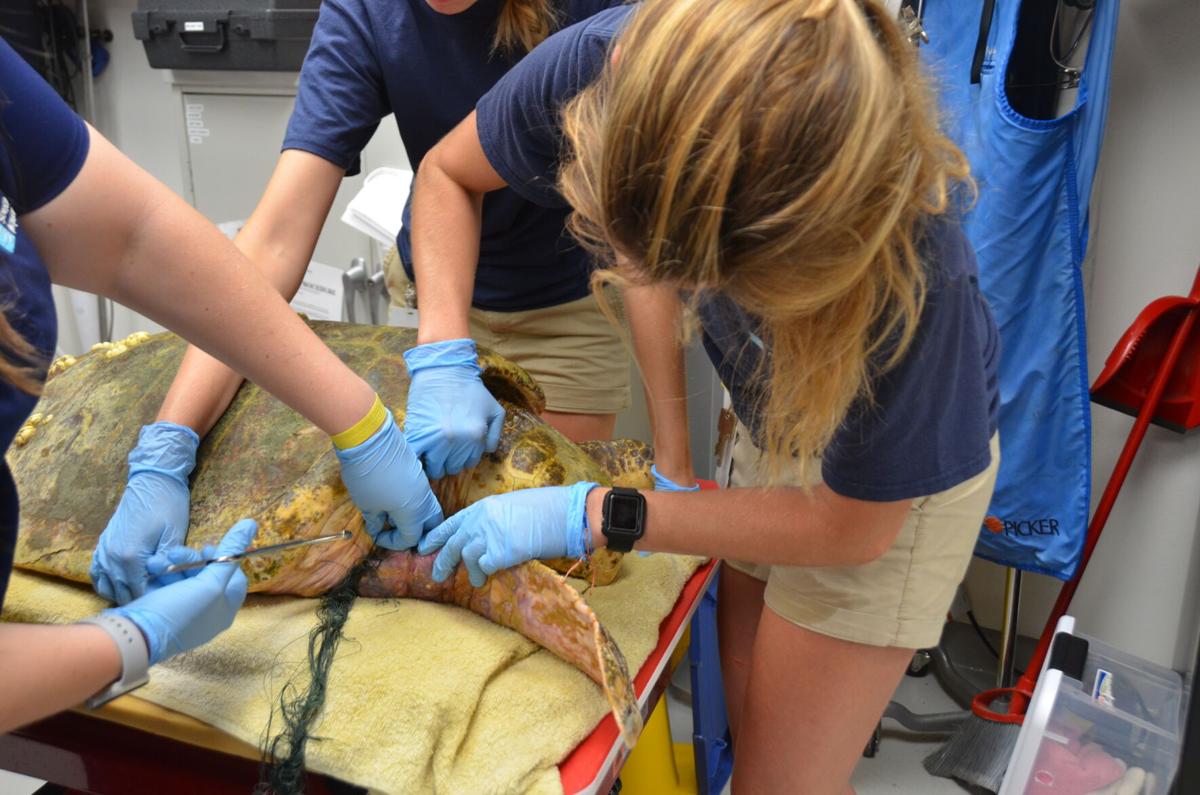 Scabbers, a loggerhead sea turtled pictured in the S.C. Aquarium's Sea Turtle Care Center in 2018, was entangled in plastic fishing line. Lines are one of the most common forms of debris to entangle marine animals. S.C. Aquarium/Provided 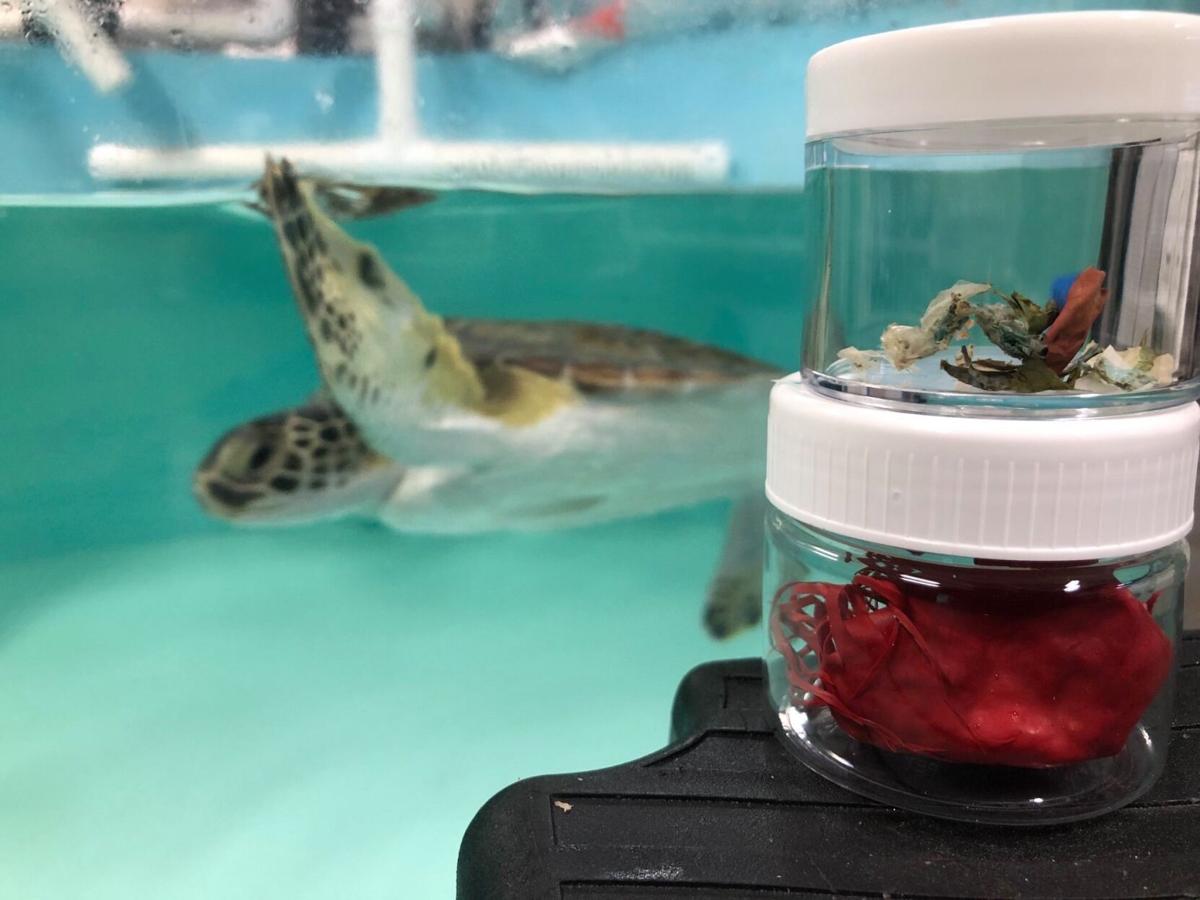 A recovering sea turtle at the South Carolina Aquarium's Sea Turtle Care Center in Charleston swims into view. Sea turtles are among marine animals most affected by by plastic debris. File/Grace Beahm Alford/Staff

Almost 1,800 marine animals ate or were caught up in plastic trash in the last decade, according to a new report that has compiled data on U.S. strandings.

Among the hardest-hit creatures were sea turtles, including the loggerheads that are the most common species to nest on South Carolina's shores. Plastic debris included plastic bags, fishing lines, deflated balloons, packing straps and food wrappers.

The Southeast was the region with the most observed mammals and turtles in distress.

The findings were little surprise to the S.C. Aquarium in Charleston, which has long been rehabilitating turtles that have eaten plastic in its Sea Turtle Care Center.

The problem also appears to be increasing. Of the 39 turtles with plastic in their digestive tracts in the past two decades, 34 of them were taken in since 2015, Kelly Thorvalson, the aquarium's conservation programs manager, said.

"This plastic pollution issue is at a crisis levels, and the convenience of these single-use plastics is simply not worth the environmental impact," Thorvalson said.

The report, released last month by conservation nonprofit Oceana, analyzed observations of dead or stranded marine mammals and turtles collected between 2009 and 2020. It did not address the prevalence or effects of tiny microplastic particles, which have been found repeatedly in air and water, as well as in the guts of animals cross the food web.

The sightings in the Oceana report, which covered 40 species of manatee, turtle, whale, sea lion, seal and dolphin, must be recorded when animals are found in distress. It's required by two laws: the Marine Mammal Protection Act and the Endangered Species Act.

But in reality, author Kimberly Warner said, there were probably many more cases that were not recorded.

Many animals that don't have mandated record collection were not included in the report, like seabirds, which a 2016 review of scientific research suggested were particularly vulnerable because they rarely throw up the hard plastics they eat.

It's not entirely clear why sea turtles were so prominent. It may be that people are simply seeing more of these entanglements because turtles have to interact with land to lay a nest, Warner said. Other animals might stay relatively far from shore and only wash up if they die and the tide takes them there.

There are also robust networks of people who track sea turtle nesting and observe these nests and, sometimes, the mothers that dig them. In South Carolina, sea turtle volunteers may move entire nests to ensure the eggs are in a safe spot. These volunteers also often pick up trash off the beach.

Lauren Rust, of the Lowcountry Marine Mammal Network, has responded to plenty of strandings of animals like dolphins, which can become ensnared by abandoned crab pots and other trash.

She wondered whether dolphins and other larger mammals might have an easier time escaping plastic entanglements than sea turtles; she said her group has observed dolphins still swimming freely, even with line caught on their dorsal fins.

But Thorvalson, of the aquarium, said turtles can also find ways to adjust if a flipper is caught or injured. One male turtle that had a flipper amputated at the care center was later tracked migrating between summer feeding areas and winter resting areas.

"They can adapt to losing a limb, as long as their health is good," she said.

The Oceana report suggests local action to curb the amount of plastic waste, and several municipalities in South Carolina, including Charleston, Mount Pleasant, towns in Beaufort County and North Myrtle Beach, have already banned single-use plastics such as grocery sacks.

Some of these bans were paused earlier in 2020 when concerns were high about the propensity to spread the coronavirus from contaminated surfaces, but the rules are now largely back in place.

Still, the pandemic has spurred on a new category of waste that can make it into waterways — namely, discarded face masks and gloves.

The appearance of these items among typical litter "was almost instant" when the pandemic started, said Andrew Wunderley, of Charleston Waterkeeper.

"It's a problem that hasn’t gone anywhere, and I think has likely gotten worse with these new forms of debris," Wunderley said.

The Oceana report, for its part, has several recommendations to cut back on the waste that is harming dolphins, wales and turtles. Among them is a need for private companies produce less disposable plastics, and offer consumers alternatives made of other materials.

Warner said some old ideas offer hope too, like deposits that encourage consumers to return containers to be re-filled, or stores that dispense oils or other common goods into containers that customers bring with them. Dry good bulk sections at grocery stores already offer this.

"These models have been around a long time," Warner said, but consumers have to choose to use or ask for them.