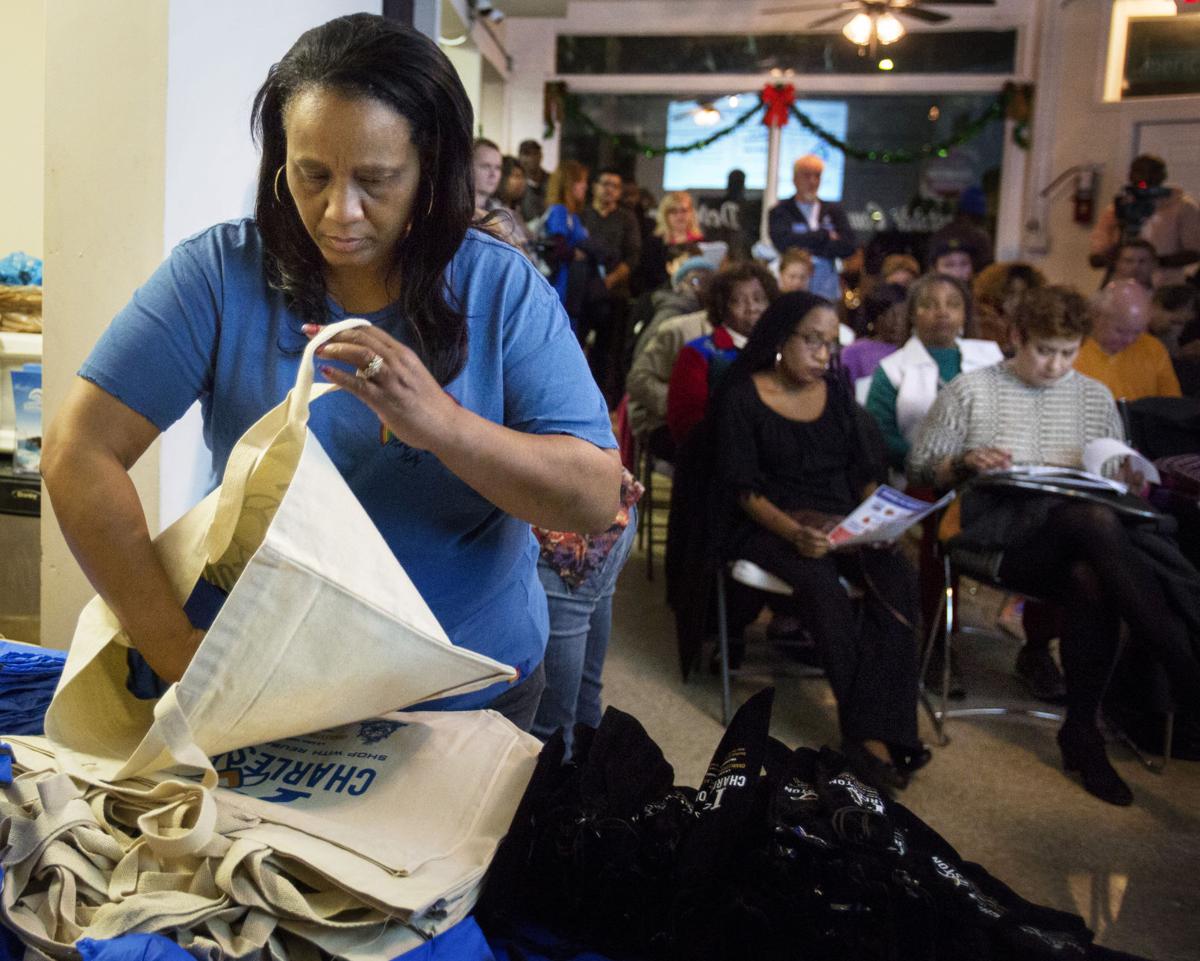 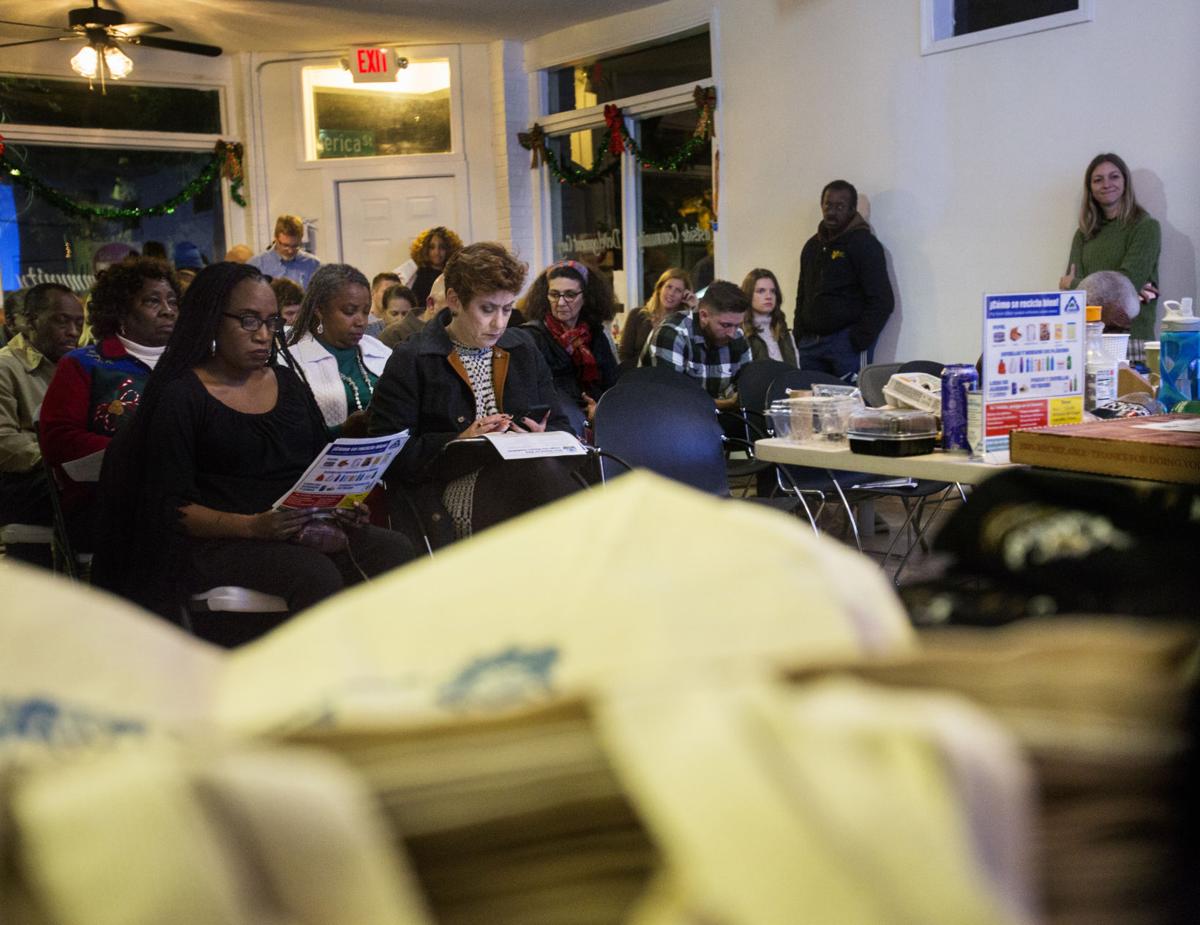 Charleston East Side residents listen to a presentation on recycling during a community meeting at the Eastside Community Development building Wednesday Dec. 11, 2019, in Charleston. Gavin McIntyre Staff 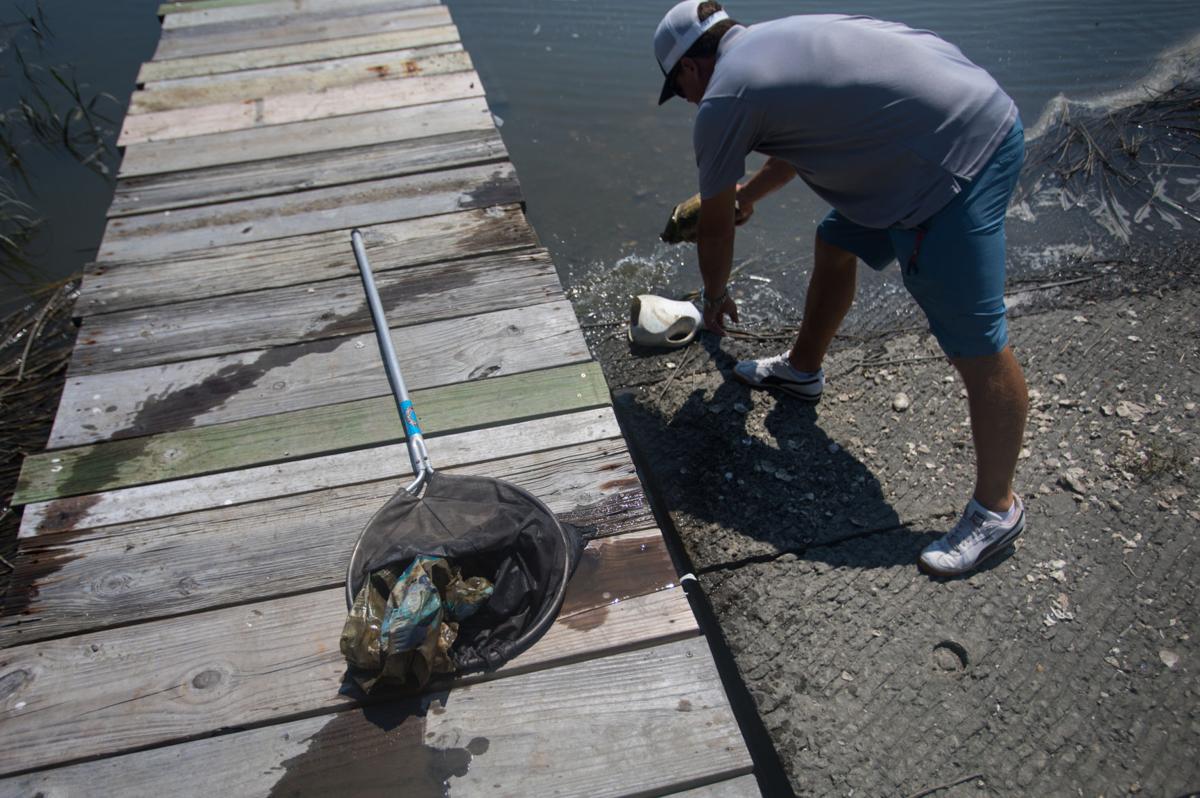 William Miller, operator of Charleston Sailing School and Yacht Charters, grabs an old detergent bottle out of the water while cleaning up around the dock on Wednesday, June 20, 2018. Miller has made it a point to make the company more eco friendly by cutting down on waste and cleaning the water whenever possible. Kathryn Ziesig/Staff 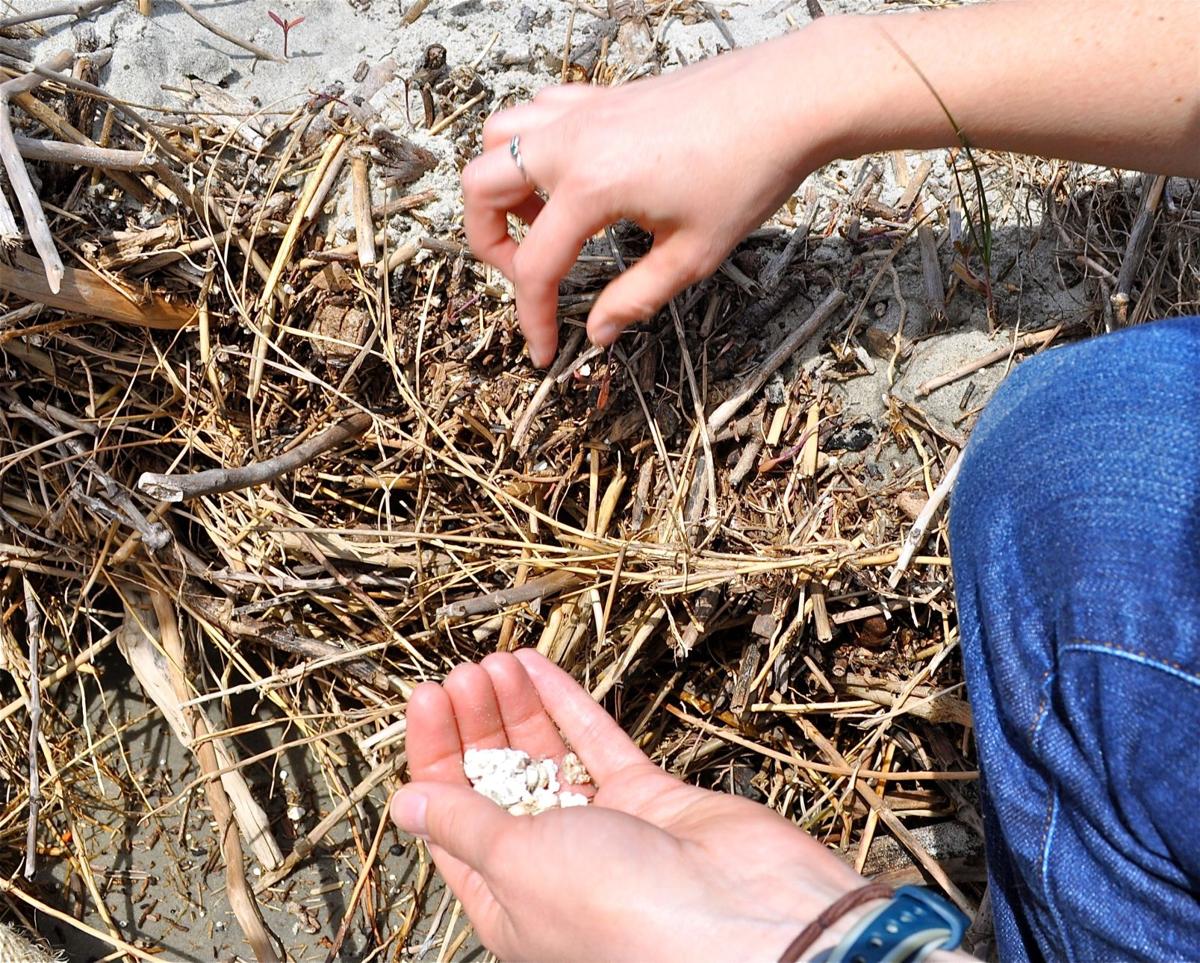 A participant in the Breaking Down Plastic summit's beach sweep picks bits and pieces of plastic foam out of decaying marsh grass on Morris Island on Wednesday. David Quick/Staff 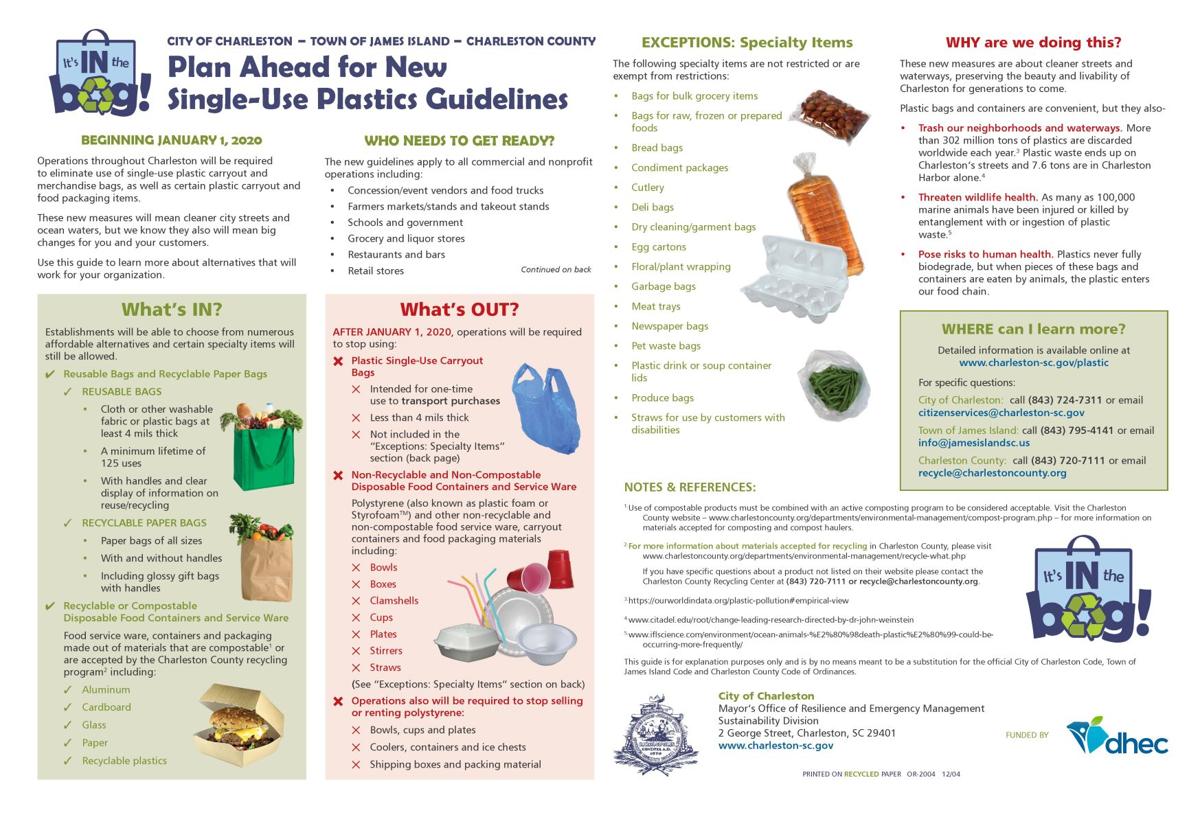 Charleston's plastics ban begins in January. A city flyer of what residents and business owners need to know. City of Charleston/ Provided.

Your sweet tea won't come in a foam cup. You won't be able to pierce the lid with a plastic straw. And you won't be carrying groceries out in plastic bags.

On New Year's Day, a new ban on single-use plastic products expands into Charleston, growing the eco-friendly efforts of South Carolina's communities in three more areas: the city of Charleston, Charleston County and the town of James Island. They bring the state total to 12 — 10 along the coast and two inland.

In the Charleston area, all disposable products will have to be recyclable or compostable, including straws and stirrers. Additionally, the costs for businesses to make the switch cannot be passed on to grocery and retail store patrons by charging them for different bags.

In 2014, The Citadel estimated that about 7.5 tons — 15,000 pounds — of plastic can be found in the Charleston Harbor at any given time. That data only considers plastic that hadn't already broken down into smaller bits.

After learning about the proliferation of plastics in the harbor and contaminating local oysters, Mayor John Tecklenburg said he felt it was time to move forward with a stricter city ordinance.

He called the new city law a "positive one for our environment."

According to the National Conference of State Legislatures, eight states have banned single-use plastics. But the plastic industry has pushed back in other places, and 14 states have a rule on the books that stops cities from passing local bans, as well as no statewide restriction. In the S.C. Legislature, a bill that would overturn local municipal bag bans failed to receive a full Senate vote earlier this year, but the measure could be picked up again in January.

Since then, the city received a $35,000 grant from the state Department of Health and Environmental Control.

City staff held workshops for business owners in October and purchased signs for businesses to use that explain how the new rules work. The city also purchased three different kinds of reusable bags — a fold-up tote, a large cotton bag and an insulated one — as well as reusable straws. Those have been distributed at several events around the city.

The City's Livability and Tourism department will handle enforcement. In the first few months the ordinance is in place, city staff will focus their efforts on educating businesses about the change. Ultimately, those who violate the city ordinance will be subjected to fines: up to $200 for the first infraction, $350 for a second violation in the same year and $500 for each violation within the same year. Businesses that repeatedly violate the city's new ordinance could have their business license suspended or revoked.

"Our goal is to make sure the ordinances are consistent because there's so many businesses located in multiple jurisdictions," McKain said.

Isle of Palms appears to be the first coastal community to ban the use of single-use plastics. That was in 2016.

2018 brought bans at Surfside Beach, Beaufort County including the city of Beaufort and towns of Bluffton, Port Royal and Hilton Head in November and Sullivan's Island in December.

Mount Pleasant joined the cause in 2019.

Two inland communities — Arcadia Lakes and Camden — will have a ban begin in the new year, as well as Edisto Beach. Richland County Council nearly implemented an ordinance in August, but leaders decided to wait a year to gather feedback from the community and appointed an 18-member ordinance task force to do so.

Caroline Brader, manager of the Land, Water and Wildlife Project for the Coastal Conservation League, said the nonprofit worked with the city to craft hardship exemptions for business owners who need more time to adjust to the new plastics ban.

"We've known from the beginning that no one wants an ordinance to be a burden for local businesses," Brader said.

Business owners can fill out a form if they believe they will suffer a hardship by rushing to implement newer, eco-friendly options, but those reasons must be specific and they have to share data on their inventory. If a business last year purchased two years' worth of foam containers, the city wants that business to provide an accounting of what they have left and how soon they will run out.

Sandra McCray, owner of Dave's Carry Out on Morris Street, said she spoke to her food distributor and learned that she'll have to raise the price of her food about 30 cents to make up for buying paper products.

"It's going to cost me a little bit of money," McCray said. "I try to keep my prices down for customers, but I've got to make it up somehow."

Johnny Doscher, owner of Doscher's IGA grocery store in West Ashley, is doing what the big chain grocery stores are doing — using up their stock of plastic bags and ordering paper ones. On two occasions, employees bagged customer groceries in reusable bags to promote the habit.

"It is the best insulation for hot and cold foods, and it's very inexpensive," Fischbein said of plastic foam. "The drawback is that it isn't recyclable. ... It's not cheap to do the right thing."

It's taken several years to find a reliable alternative. Corn-based drink containers, while compostable, melted in the sun. One time a customer had their cup melt in their car. To save on costs, Fischbein tried to buy the cups in bulk. His employees found the cups melted in a storage room.

When Fischbein switched from foam to paper containers in 2014, it quadrupled his costs: 12 cents each for foam versus 48 cents for paper.

"Over the years, that's tens if not hundreds of thousands of dollars," Fischbein said. "There's a price tag on doing what's right."

After Mount Pleasant implemented a plastic straw ban, finding a reliable biodegradable straw proved difficult. The ones Fischbein purchased take about seven years to break down, compared with the nearly 50 to 250 years for plastic ones.

"I'm constantly searching to find an affordable, better product that's environmentally safe," Fischbein said. "It's definitely not an easy feat. I understand any owners abiding by the ordinance and being forced to make that switch to no-Styrofoam. When they go and look at the price tag on all of that their eyes are going to go wide."

Those "pristine" Charleston estuary waters are in worse shape than most people think. At least 7 1/2 tons worse.

Letters to the Editor: Soleimani’s death the right move

As an independent voter, Marine veteran of Vietnam and former lawman, I would like to put something into perspective for all of the people who…