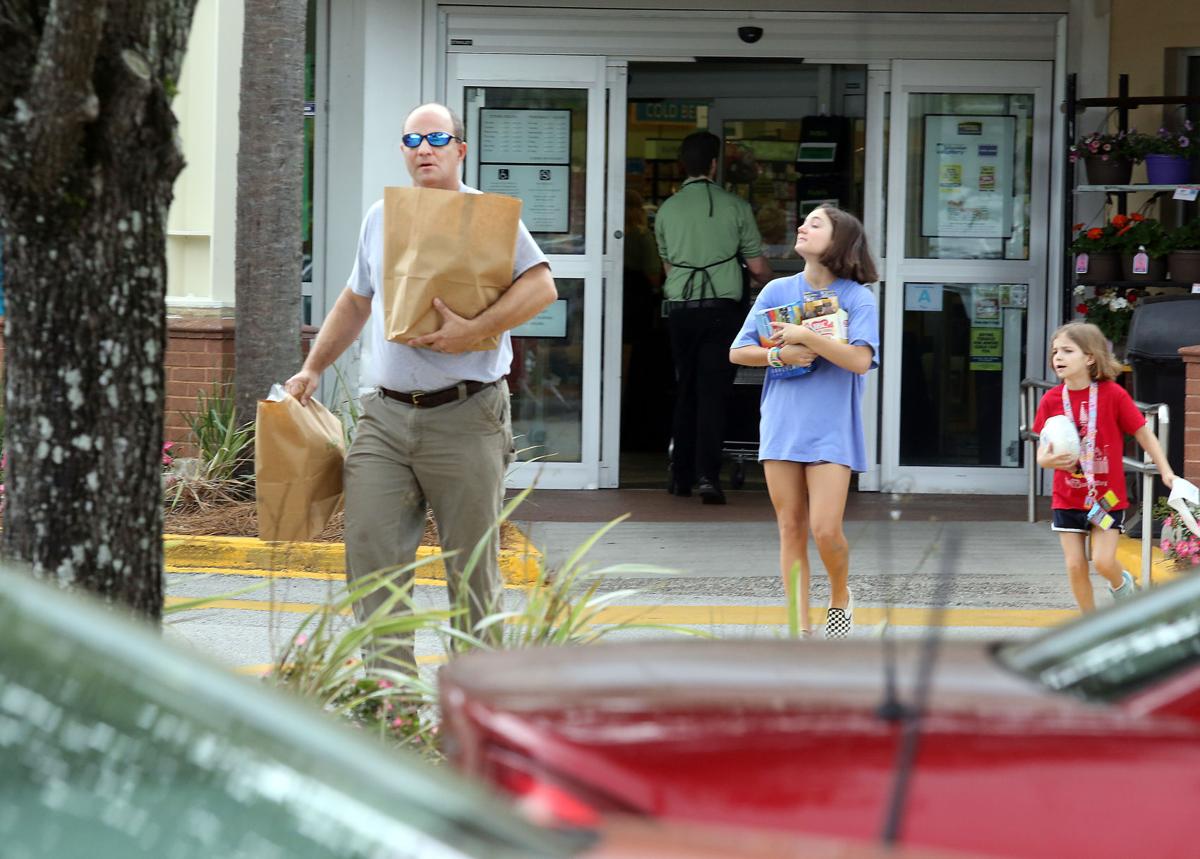 Jeff McIntyer (from left) leaves a Publix grocery store with his daughters Aylene and Laurie on Friday, April 12, 2019. Publix, along with other Mount Pleasant stores and restaurants, have already switched to paper bags from the plastic ones. Brad Nettles/Staff 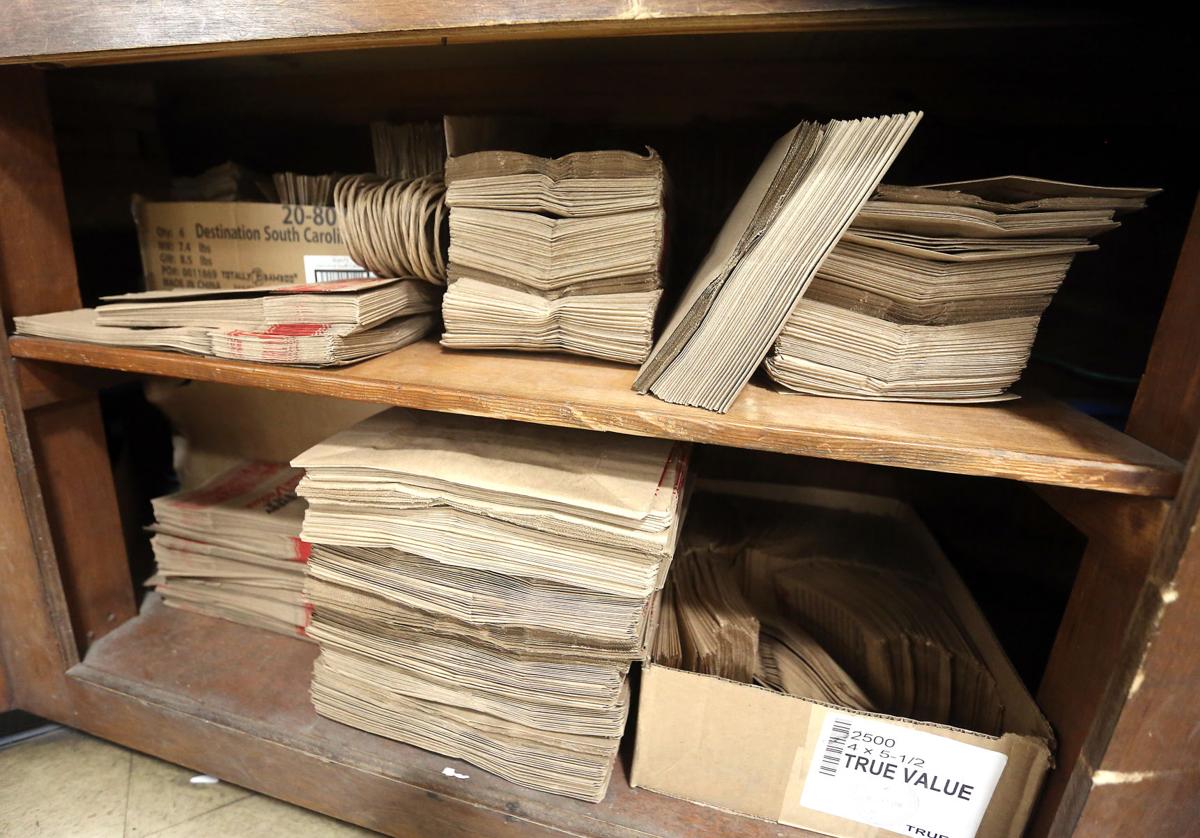 Low Country True Value stores paper bags under the checkout counter. True Value, along with other Mount Pleasant stores and restaurants, have already switched to paper bags from the plastic ones. Brad Nettles/Staff 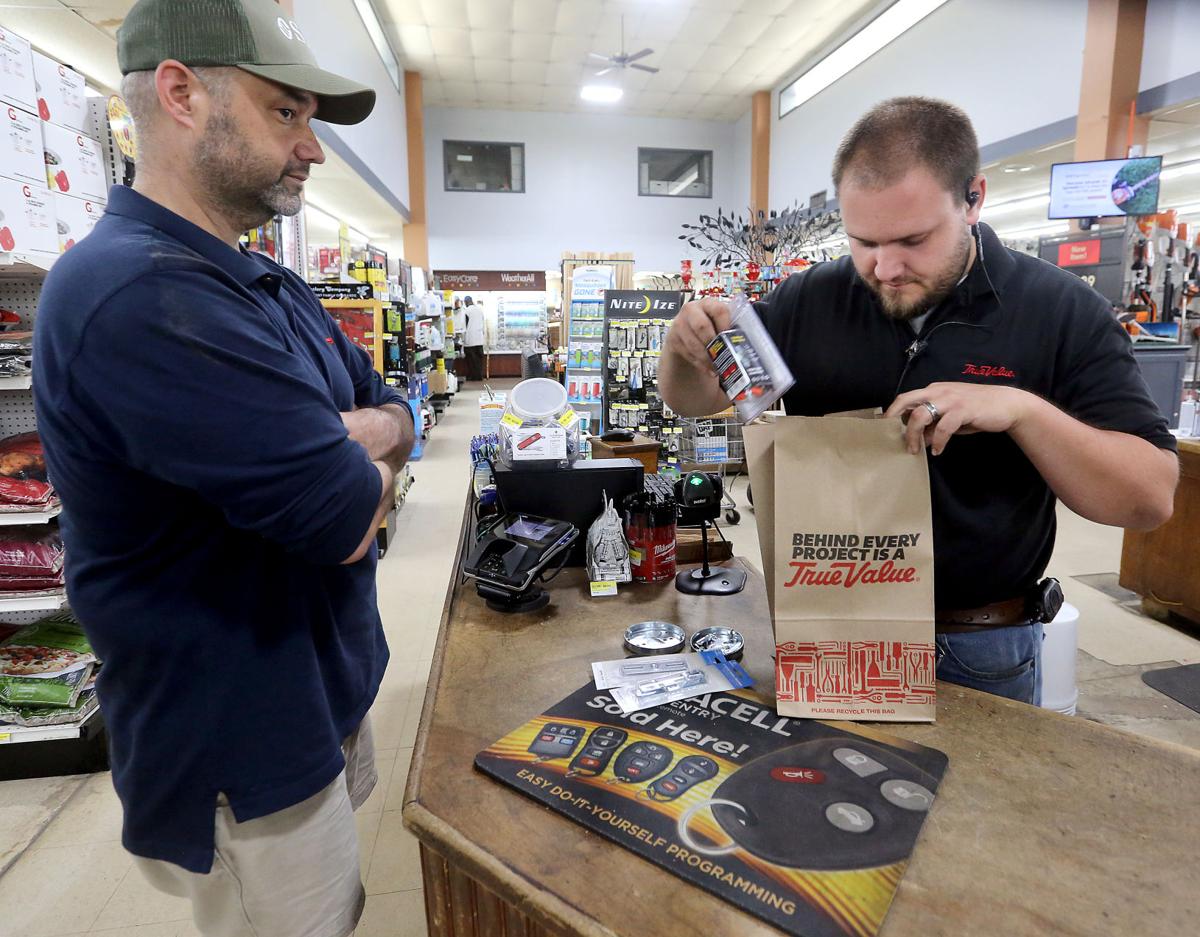 Robert Campbell with Low Country True Value fills a paper bag with Josh Hulen's purchase on Friday, April 12, 2019. True Value, along with other Mount Pleasant stores and restaurants, have already switched to paper bags from the plastic ones. Brad Nettles/Staff

Jeff McIntyer (from left) leaves a Publix grocery store with his daughters Aylene and Laurie on Friday, April 12, 2019. Publix, along with other Mount Pleasant stores and restaurants, have already switched to paper bags from the plastic ones. Brad Nettles/Staff

Low Country True Value stores paper bags under the checkout counter. True Value, along with other Mount Pleasant stores and restaurants, have already switched to paper bags from the plastic ones. Brad Nettles/Staff

Robert Campbell with Low Country True Value fills a paper bag with Josh Hulen's purchase on Friday, April 12, 2019. True Value, along with other Mount Pleasant stores and restaurants, have already switched to paper bags from the plastic ones. Brad Nettles/Staff

A bill to undercut local bans on plastic bags and other containers has failed yet again to move through the General Assembly before lawmakers leave for the summer, but industry groups aren't giving up the fight.

Environmentalists who support local restrictions argue that the bill is better poised than ever to actually pass, however, as lawmakers will be able to take it up again without losing any progress when they return in the second part of a two-year session.

Since legislators last considered curbing cities' and towns' ability to restrict plastics a year ago, the bans have proliferated to 17 jurisdictions across the state, including in two Midlands towns far from the coastal corridor where the first ordinance was passed in 2015. At the same time, scientists keep finding evidence of plastic in waterways and drinking supplies across the world, in areas as remote as the Mariana Trench and as close as Charleston Harbor.

But new research shows that while bag bans may be effective in ridding cities of the standard grocery store-issue sack that's so easily caught and carried in the wind, consumers don't stop using disposable plastics once restrictions are in place, instead seeking it out in other forms.

It all adds up to a complicated — and possibly nasty — fight that's likely to unfold on the floor of the state Senate next year.

"We’ll have hundreds of amendments to be brought up on the floor. There’s going to be a lot of us contesting the bill," said state Sen. Sandy Senn, R-Charleston. "I think it's going to be set up to be a huge fight, a huge filibuster. It's going to take up lots and lots of time."

Last week, the bill to undercut bans failed to make the annual crossover deadline, or the time by which legislation must move from one house to another in order to be enacted in a given year. While a two-thirds vote of the Senate could still carry it over, Senn and other observers said it was unlikely a bill as controversial as this would get that attention, especially as lawmakers begin final budget negotiations.

And the bill is indeed controversial: unlike last year's edition, the bill doesn't include a grandfather provision, meaning all 17 of the current bans could be wiped out, if it's implemented as written.

"If there's not a will in our body to allow grandfathering, this thing will be an all-out, very long, strung-out war," Senn said.

Industry groups representing retailers, convenience stores, grocers and the bag manufacturers themselves say the existing patchwork of ordinances creates confusion for both businesses and customers. Local ordinances are not identical; the one in Mount Pleasant restricts a broad range of packaging beyond just bags, for example. Folly Beach has banned balloons on the beach, in addition to bags.

The Statehouse bill would erase any sort of ban or fee on any "auxiliary container," a broad category that includes plastic film, foamed plastics like Styrofoam, glass, metal and cloth items.

Local rules also prove expensive. Matt Seaholm of the interest group American Progressive Bag Alliance, which has fought packaging restrictions across the country, said the cost to switch to all-paper bags ranges from $10,000 to $100,000, depending on the store size.

And even stores that aren't technically affected by the rule are making the switch. Brad Poe, who works for convenience store and fast-food restaurant operator Buck Management Corp., said one of the company's Sonic franchisees is making the switch, even though it's in a "doughnut hole" of unincorporated land surrounded by property within Mount Pleasant.

"Sonic corporate is forcing our hand to go to paper and away from Styrofoam because they don't want to get hit with a non-green image," Poe said.

In many cases, state-level legislation is heavily supported by larger industries, like Publix. The grocer supported a successful preemption bill in Florida, the Tampa Bay Times reported, despite telling The Post and Courier they were preparing for the ban in Mount Pleasant which takes effect on Tuesday.

Seaholm said that there are about 20 states across the country that don't allow local bans, whether because they have passed a bill like the one proposed in the Palmetto State or because the state's constitution does not allow it. But that hasn't stopped the flow of new ordinances in South Carolina.

They're even reaching places like Arcadia Lakes, a bedroom community of 900 outside Columbia, and Camden. Officials in those towns say that plastics in the water isn't just an issue for coastal communities.

"Take a few minutes to kind of look around and you’ll see that plastic bags not only are everywhere, but they're making their way down our waterways that are up and down in every city and every county," said Jeffrey Graham, a city councilman in Camden.

Around the Charleston region, advocates say bag bans have led to a noticeable difference on land and in waterways. Marlo Shedlock, chairwoman of the Charleston chapter of the Surfrider Foundation, said her group saw 80 percent fewer plastic bags during cleanups on Folly Beach after a ban was passed there.

But research published earlier this year shows that in places with outright bans on plastic bags, consumers end up buying more trash bags to replace the flimsier bags they had reused in the past.

The study, conducted by behavioral economist Rebecca Taylor of the University of Sydney, found that in California, bag bans eliminated 40 million pounds of plastic from the sacks, but increased demand for unregulated product led to a 12 million pound bump in the amount of plastic bought in the form of trash bags, which tend to be thicker.

"Unfortunately, we have just been exposed to so many different types of single-use items," Shedlock said. "We never used to be such a disposable society. That’s where we’re at now: just throw it away."

Other research has shown that single-use plastic bags also have the smallest carbon footprint, with paper bags being less environmentally friendly in terms of creating planet warming emissions. Most reusable bags have to be used many, many times to compensate for their much more carbon-intensive production process.

But towns and cities in South Carolina have typically been concerned with the plastic that ends up in waterways, and in that sense, the bag bans are working, Wunderley said.

"(The studies) don't at all consider the issue of plastic pollution," Wunderley said. "I've spent a lot of time mucking around in the marsh and the creeks and the rivers during cleanup, and I have never found a paper bag."