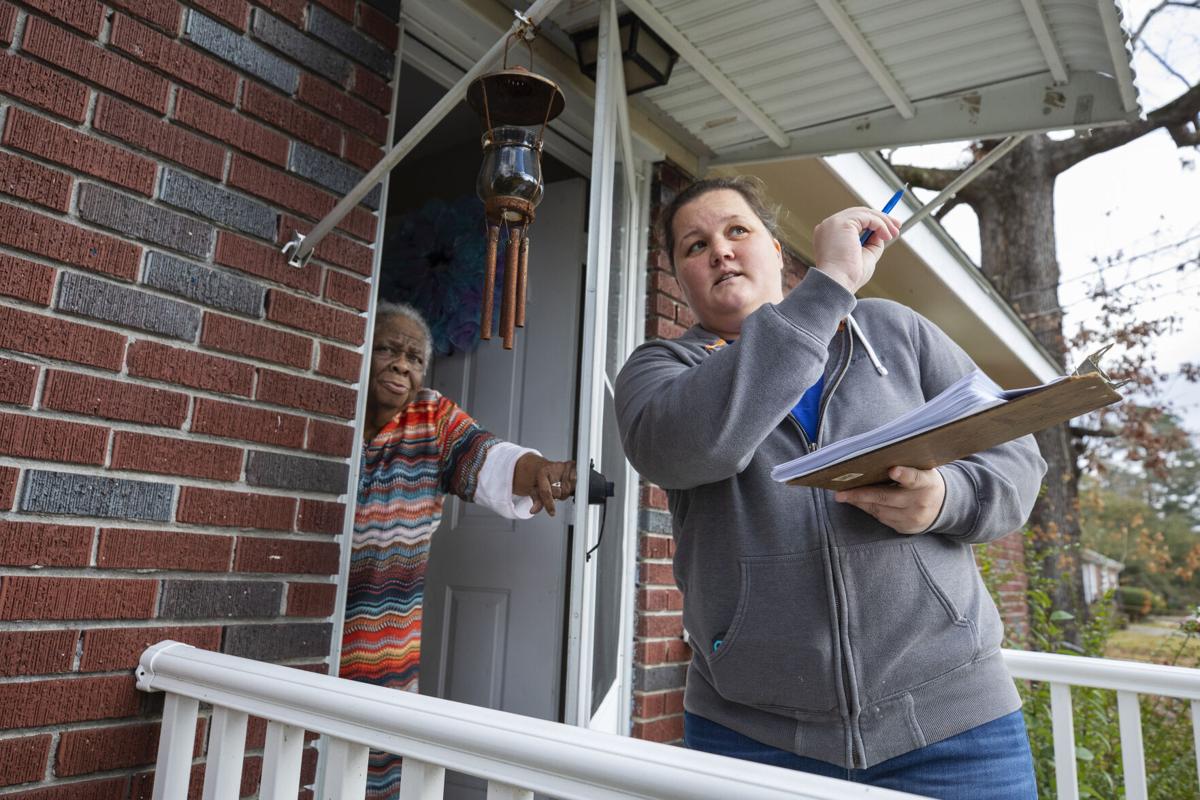 Andrea Bailey Erb (right) talks to Susan R. Brown about the impact a development of townhomes could have on her neighborhood as she goes door to door in the Charleston Farms subdivision of North Charleston on Saturday, Jan. 9, 2021. Lauren Petracca/Staff 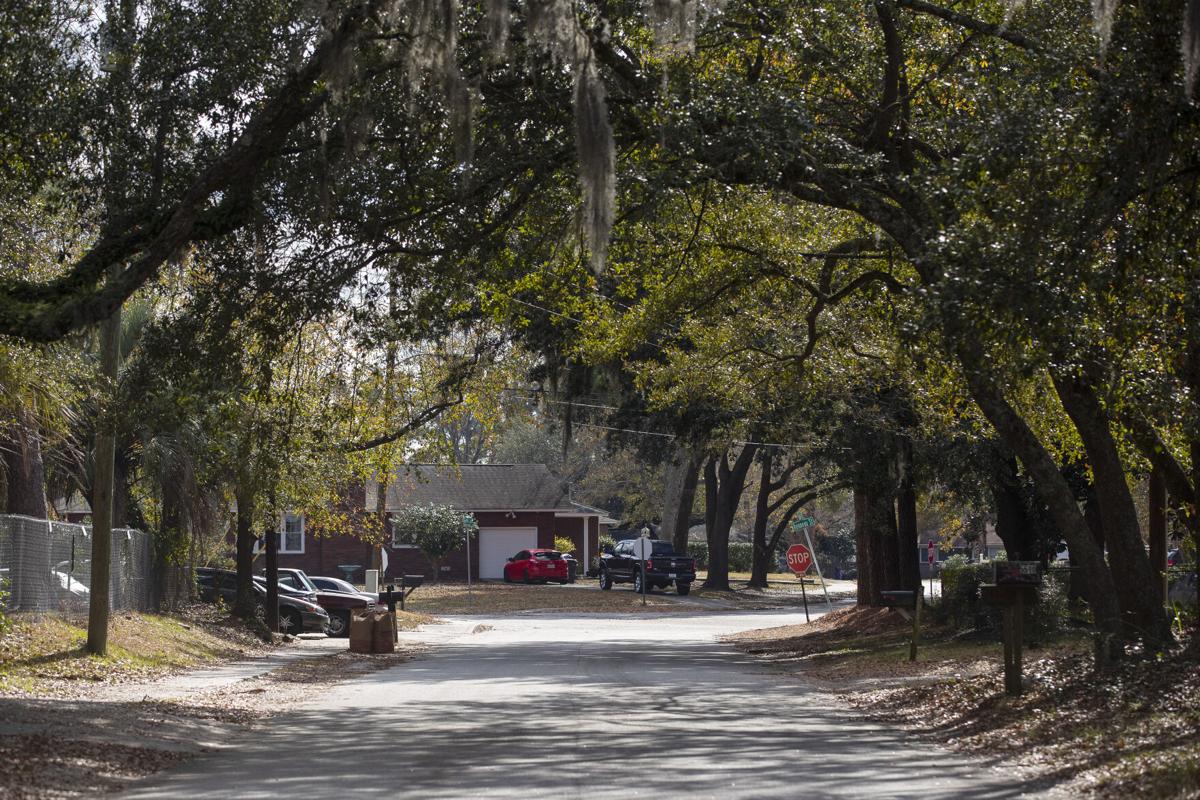 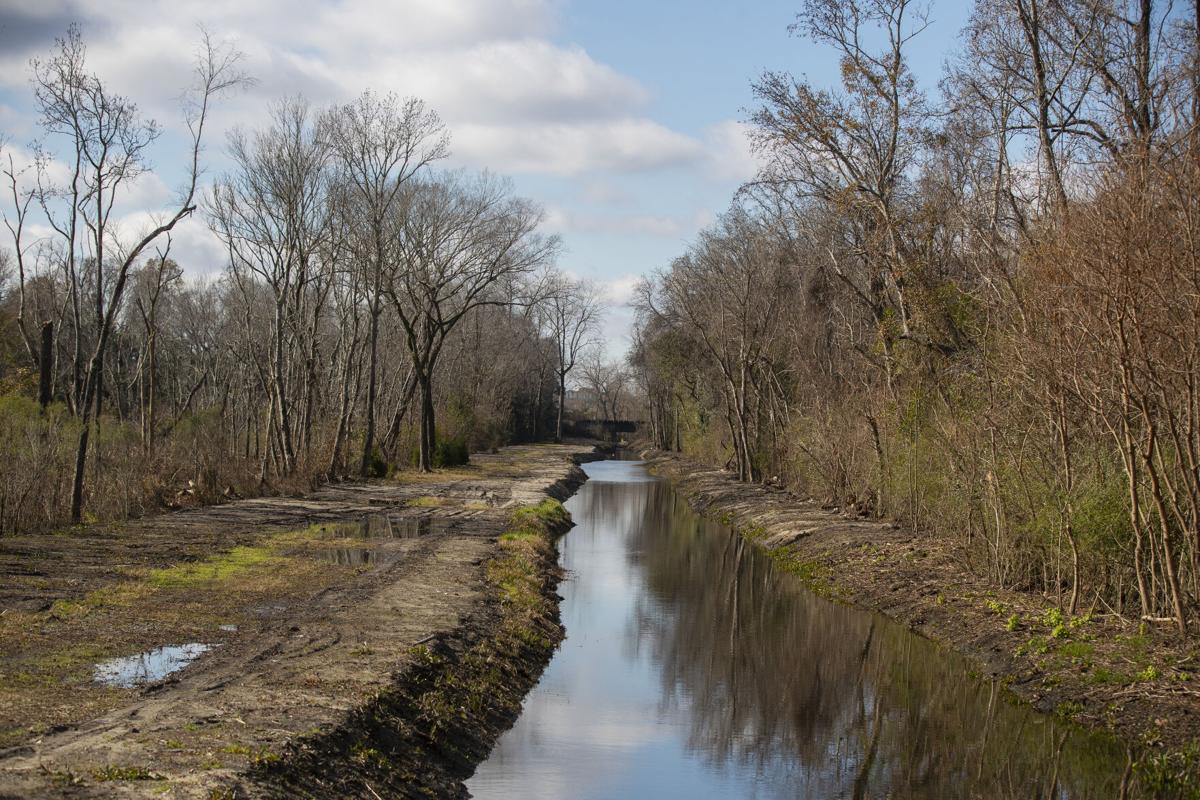 Filbin Creek, which runs through North Charleston, is pictured Saturday, Jan. 9, 2021. Andrea Bailey Erb, a lifetime resident of the Singing Pines subdivision, is worried that a development of 222 townhomes near her neighborhood could cause more flooding around the creek. Lauren Petracca/Staff 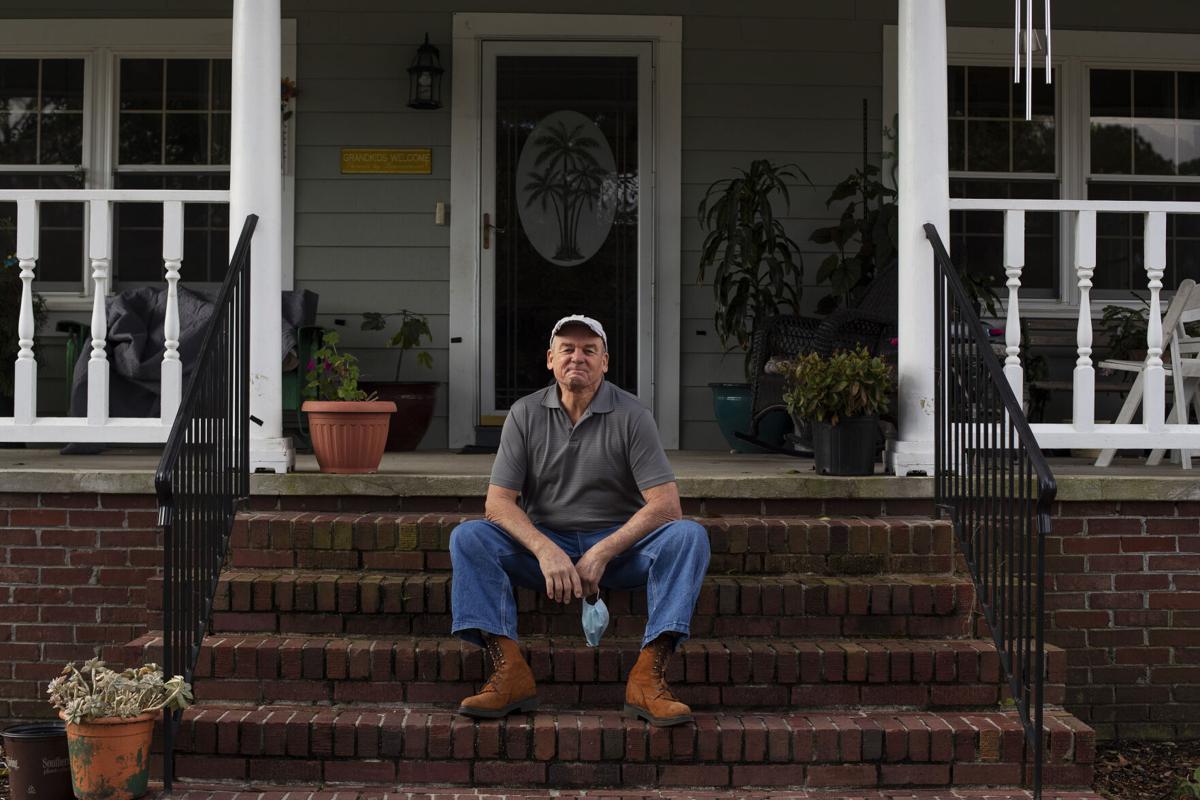 Neil Bailey, 66, sits on the steps of the home he has lived in since he was 5, in the Singing Pines subdivision in North Charleston on Saturday, Jan. 9, 2021. Bailey is worried the proposed development of 222 townhomes near his home would ruin the community. “We’re not anti-build. We don’t need a 45-foot elevated rooftop with no buffer between us,” he said. Lauren Petracca/Staff 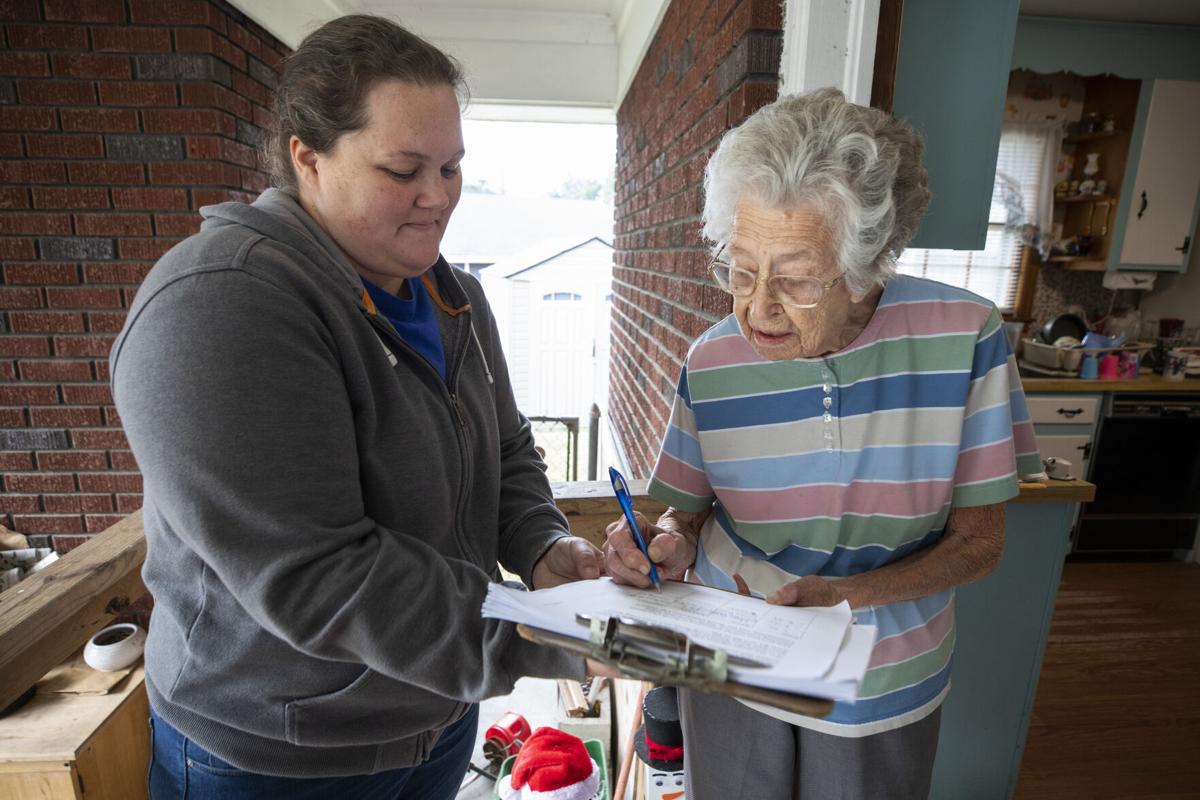 Joan Seel, 93, signs a petition against a rezoning and development of 222 townhomes in a nearby subdivision as Andrea Bailey Erb (left) goes door to door collecting signatures in the Cameron Terrace neighborhood in North Charleston on Saturday, Jan. 9, 2021. Lauren Petracca/Staff 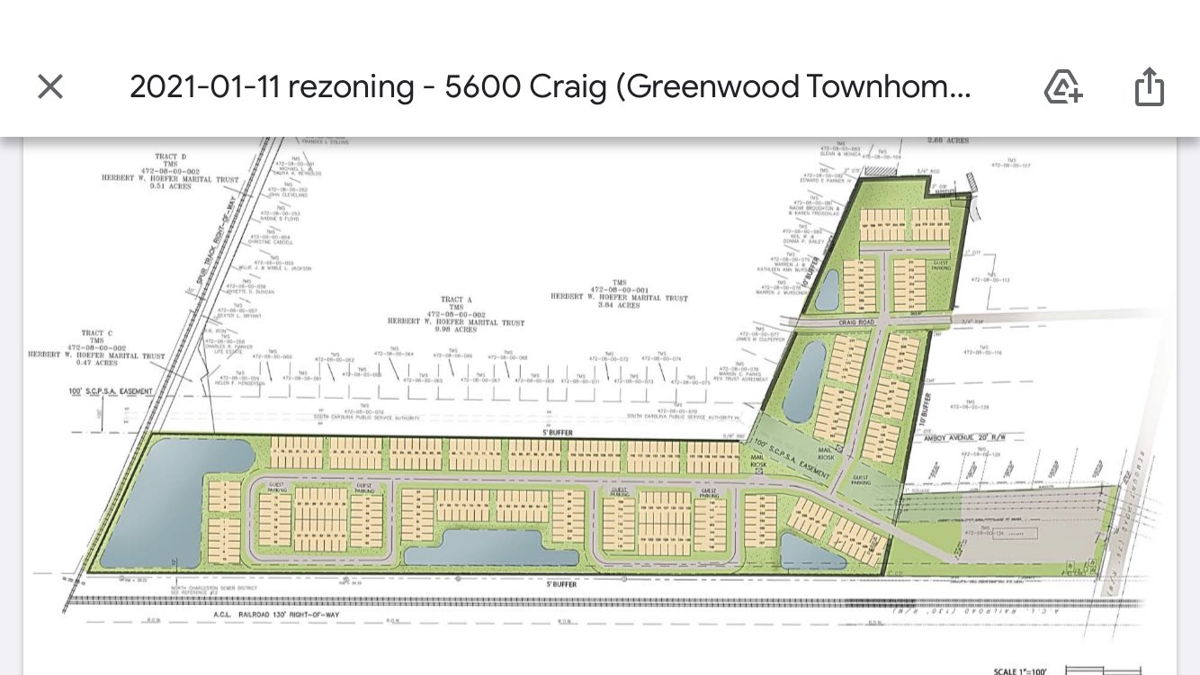 Andrea Bailey Erb (right) talks to Susan R. Brown about the impact a development of townhomes could have on her neighborhood as she goes door to door in the Charleston Farms subdivision of North Charleston on Saturday, Jan. 9, 2021. Lauren Petracca/Staff

NORTH CHARLESTON — Plans to build more than 200 townhomes has raised fear among dozens of residents who worry about the project's impact on the surrounding communities.

Developers want properties along Craig and Remount roads in the city rezoned to pave the way for a 222-townhouse development known as Greenwood Townhomes, which developers say will provide affordable living spaces.

Reasonably priced homes are becoming increasingly important as the Charleston region grapples with an affordability crisis. This is especially the case in North Charleston, which has the nation's worst eviction rate and where the state's intentions to widen Interstate 526 will displace dozens of families.

Residents are opposing a rezoning that would pave the way for a 222 townhome development near the Singing Pines neighborhood in North Charleston.

Greenwood Townhomes would sell for $185,000 to $195,000 with monthly mortgage payments targeted at $783 a month, said Chris Young with downtown Charleston-based STYO Development LLC.

Many residents living in the adjacent neighborhood, Singing Pines, oppose the project, feeling it will increase traffic flow throughout the neighborhood. Many in other surrounding communities, like Cameron Terrace and Charleston Farms, also say it will heighten flooding for communities that have repeatedly suffered from high-water levels near Filbin Creek, which follows I-526 into the Cooper River.

Residents say the Remount Road development will be one of several projects in the area that will cause the creek to overflow.

Highlighting their concerns, the community is pointing to the I-526 widening and a recent permit given to developers to fill in just over 28 acres of wetlands at the headwaters of Filbin Creek.

There have been multiple attempts to develop land along Craig Road. The plans have regularly been contested by residents of Singing Pines, a community of more than 80 houses and slim streets.

The most recent attempt saw pushback from 15 residents who spoke out at a North Charleston Planning Commission meeting and a petition of 100 signatures that will be submitted to City Council.

The Planning Commission voted 4-1 to recommend approval of the rezoning and make way for the residential project.

The decision will go before the Public Safety Committee on Feb. 18. City Council will afterwards make a final decision.

The city's Planning Department supports the rezoning because "the proposed plans are consistent with the mixed-use development patterns of the surrounding area" and it aligns with city's 10-year vision for that part of North Charleston.

The townhouse project would be tucked between two major thoroughfares, Rivers Avenue and Remount Road.

Pawnshops, restaurants, furniture stores, car dealers and mechanics are stationed along Rivers Avenue. The project would also add commercial space on Remount Road, which contains a handful of single-family homes and businesses.

Two rail lines are also nearby.

The development would place 222 single-family attached dwellings across 23 acres and commercial development on 3 acres fronting Remount Road just outside the Singing Pines neighborhood.

A primary access point into the neighborhood would be installed off Remount Road to help minimize traffic impact on Craig Road. That road would also be widened to include dedicated left and right turning lanes, which developers say would keep traffic from building up along the residential street.

The language in the zoning rules would also forbid developments with high-traffic uses, such as gas stations and fast-food restaurants, on the 3 acres of commercial property.

The stormwater system won't negatively impact the neighborhood and will reduce water runoff into nearby Filbin Creek, said Ian Duncan with the engineering firm Stantec.

The drainage system will collect water from rear yards in Singing Pines into a system of five proposed ponds, he said.

The plan exceeds North Charleston's stormwater requirements by calling for a gate flap at the outfall drainage to Filbin Creek to eliminate tidal influences and keep creek water from coming back into the neighborhood, Duncan said.

There are also no endangered species on the site or natural wetlands, Duncan said.

STYO has done other projects in North Charleston, Moncks Corner and Mount Pleasant, and developers said the density of their current North Charleston project is what makes the proposed sales price work.

"I want to think of this as a very unique opportunity for the city of North Charleston," Young said. "We are directly targeting affordability."

The developers' assurances did somewhat ease Erin Weeks' concerns, but she still has reservations that are shaped by past experiences.

Weeks lives on Hartford Circle in Cameron Terrace, located in a high-risk flooding area near Filbin Creek. She moved into her home in September 2015 during the week that a massive flood brought high-water levels to many around the creek. All of the storms since then have brought fear and dread to the community, Weeks said.

She said she was encouraged by the developer's mitigation proposals but questioned how ponds would mitigate 20 acres of development.

"It seems to be a very high risk to take," Weeks said.

Andrea Bailey Erb was disappointed by the recommendation from the Planning Commission, feeling the group didn't respond to public outcry.

Erb has fought for more than a year to keep the property near Singing Pines undeveloped, and isn't giving up yet. She led the charge to collect signatures for the petition, convinced the proposed complex would increase water problems for North Charleston residents near the creek.