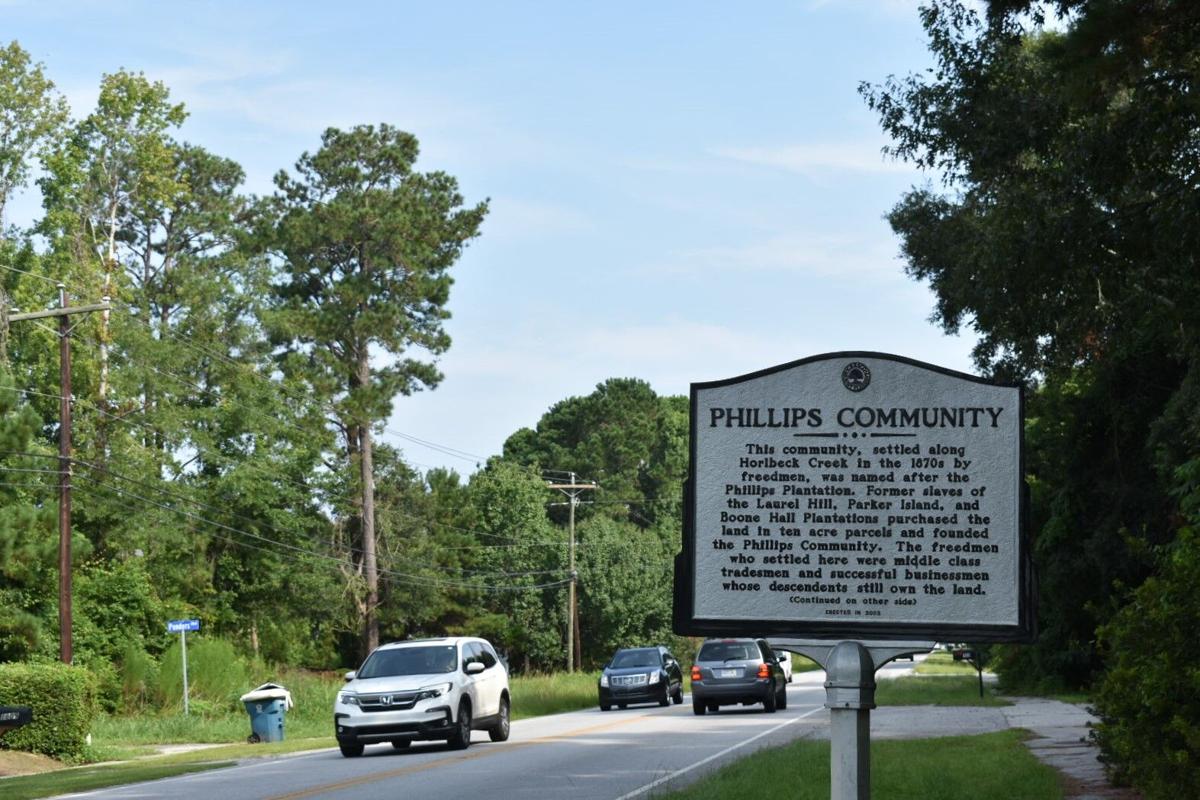 The Phillips Community historic marker on Highway 41 explains the history of the settlement community. File/Staff 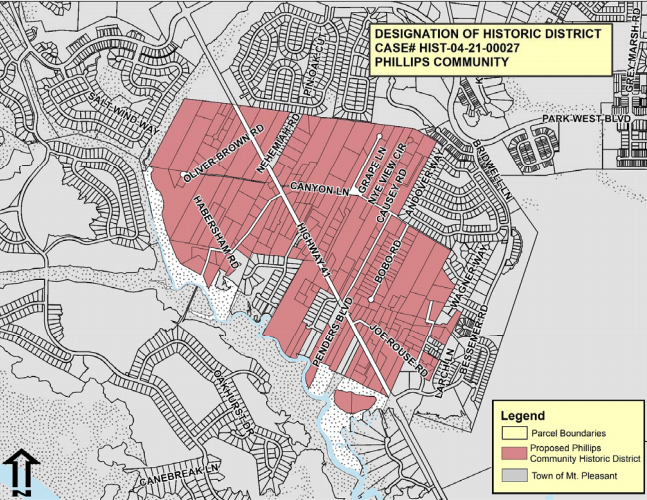 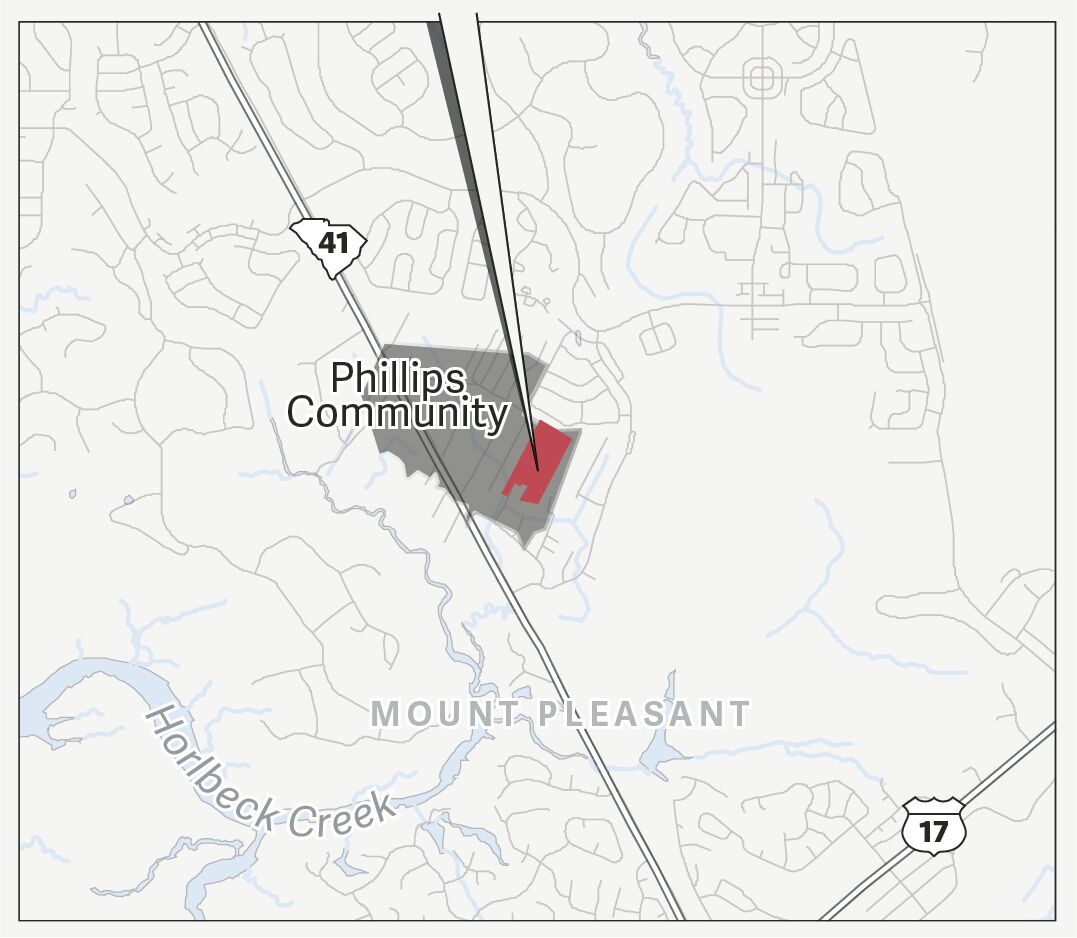 ANNEXATION DISPUTE IN PHILLIPS: The Phillips community has opposed plans to annex roughly 19 acres of the unincorporated settlement into the town of Mount Pleasant. SOURCE: ESRI

The Phillips Community historic marker on Highway 41 explains the history of the settlement community. File/Staff

MOUNT PLEASANT — Leaders in the Phillips community, fresh off an apparent win in the fight to keep S.C. Highway 41 from being widened through the middle of the area, now fear annexations could harm efforts to win historic recognition.

The community has been seeking a historic designation from Charleston County, which would add a layer of regulatory review to development projects, and inclusion in the National Register of Historic Places that would give the community higher standing when federal projects — including road projects — are reviewed.

At issue now are requests to annex about 19 acres of land into the town of Mount Pleasant. Most of Phillips sits in unincorporated Charleston County, and the annexations could seriously damage the community's application to the National Register of Historic Places, according to consultant Brittany Tulla.

The fear, she said, is that if enough of the community is transformed by modern development, it could fail to win recognition from the federal government as historic.

Phillips was settled in the late 1800s by Black residents, many of whom had previously been enslaved, and their descendants make up most of the residents today. It's a small community with a rural feel — modest homes on large lots — that's surrounded by modern subdivisions in one of the Charleston area's hottest real estate markets.

Community leaders want to see Phillips treated as a historic community, just like parts of the Charleston peninsula or Mount Pleasant's Old Village, with extra levels of protection built in to the development review process.

“They want to have future developments reviewed to make sure they fit with the community’s historic character," said Jason Crowley of the Coastal Conservation League. The group, along with the Historic Charleston Foundation and Charleston Preservation Society, hired Tulla to consult.

Charleston County Council has been moving to designate the 259-property, 422-acre community as historic, and a final vote could come at a meeting Aug. 24. Some council members have expressed reservations.

"I'm in favor of the concept, but I'm concerned about private property rights," Councilman Herb Sass said at a June meeting. "I'm worried about unintended consequences."

At the June County Council meeting, real estate agent Jay Satterfield told County Council members that he has two properties in Phillips that are for sale, but potential buyers have been scared off by the proposed historic district designation.

"It happened three or four times," he said.

In Mount Pleasant, properties that are adjacent to the town limits are required to seek annexation — becoming part of the town and subject to its development rules — in order to get water and sewer service. They get access to the utilities regardless of the town approving the annexation, but they are required to apply.

Richard Habersham, president of the Phillips community, said approving the nearly 19 acres for annexation "would help destroy the community." The land is adjacent to the Park West subdivision.

"These two or three parcels should not ... destroy our hopes of being on the National Register," he said.

Efforts to reach the property owners Wednesday were unsuccessful. All three were owned by Jimmy R. Martin until 2001, county records show, then by different individuals with the same last name.

In Phillips, properties are often passed down through families, and in some cases have multiple owners as a result.