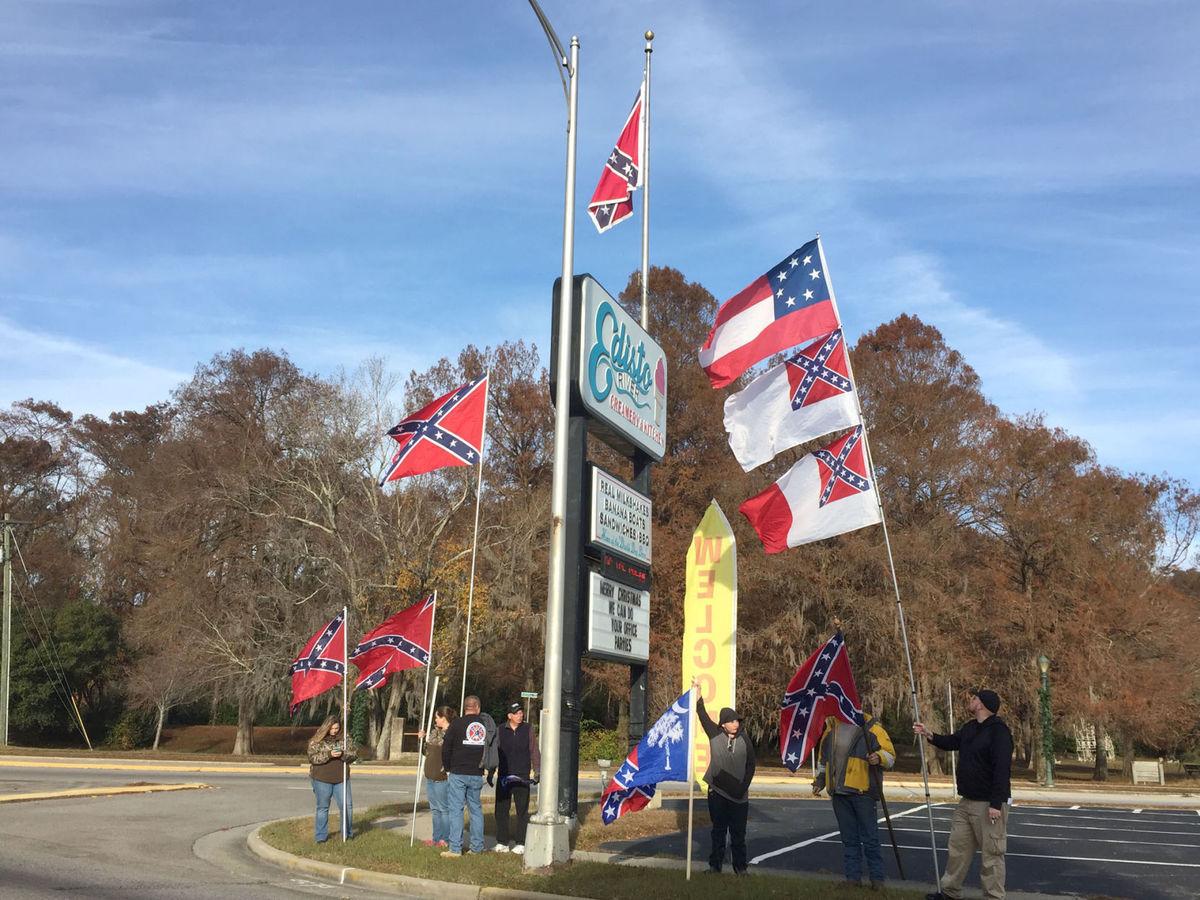 Confederate flag supporters demonstrated by the Edisto River Creamery after the business attempted to remove the Confederate battle flag from the flagpole in front of the restaurant. File/Times & Democrat 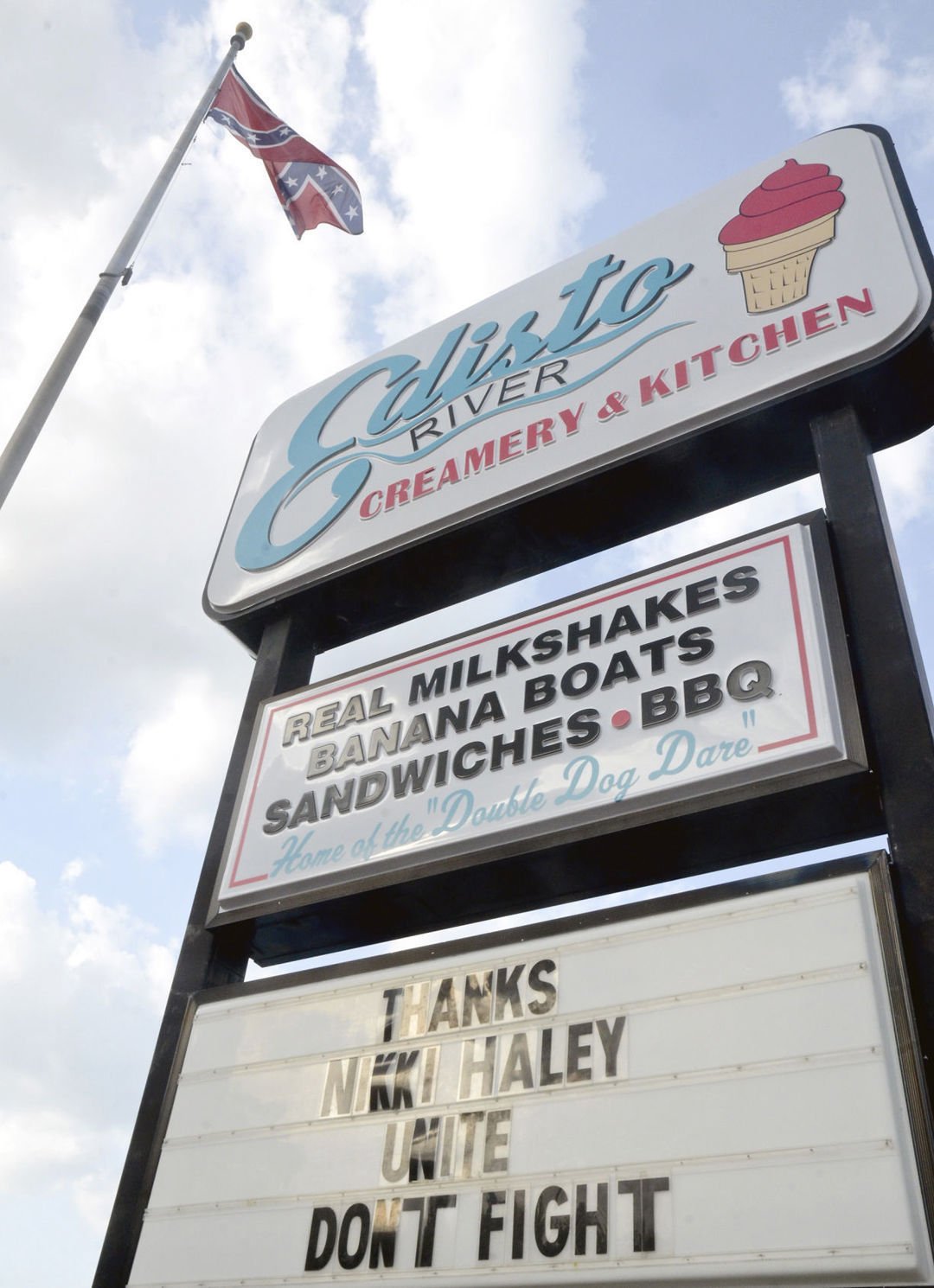 Edisto River Creamery & Kitchen in Orangeburg wanted to take down the battle flag in front of the business. File/Times & Democrat

Confederate flag supporters demonstrated by the Edisto River Creamery after the business attempted to remove the Confederate battle flag from the flagpole in front of the restaurant. File/Times & Democrat

Edisto River Creamery & Kitchen in Orangeburg wanted to take down the battle flag in front of the business. File/Times & Democrat

The fight over a Confederate flag in one South Carolina city has entered a new battleground: the zoning department.

A restaurant owner has filed a zoning complaint over a Confederate flag that continues to fly outside his eatery at a prominent Orangeburg intersection not far from South Carolina State University and Claflin University — both historically black colleges — and in a county where African Americans make up more than 60 percent of the population.

The zoning appeal is the most recent development in a feud between Edisto River Creamery & Kitchen owner Tommy Daras and members of the Sons of Confederate Veterans, who maintain they own a disputed cubicle-sized property where the rebel flag pole stands.

The fight is also the latest illustration of the continuing cultural debate over the Confederate flag and other monoliths dedicated to the Confederacy, which have come under more scrutiny since Dylann Roof's racially-motivated murder of nine black worshipers at the Emanuel AME Church in Charleston.

Roof was photographed holding the Confederate flag — an image that led the South Carolina Legislature to vote shortly after the June 2015 shooting to remove the emblem from the Statehouse grounds.

Last November, Daras tried to hold a ceremony to remove the Confederate flag next to his restaurant, which he says keeps away some customers. He was stopped by two members of the pro-Confederate group that threatened to have him arrested for trespassing.

The Sons of Confederate Veterans say they were deeded the 0.003 acres of land where the flag is displayed by Maurice Bessinger, the former owner of the business location and who was well known in South Carolina for his barbecue chain and open dissemination of white supremacist literature at his Piggie Park restaurants. The site has a small monument next to the flag.

As a result, Daras, who purchased the property for his business in 2015, is now being represented for free by attorney Justin Bamberg, a Democratic member of the South Carolina House of Representatives.

In a strongly-worded letter to the city, Bamberg argues the bit of land the SCV paid $11.10 in property taxes on last year doesn't comply with the site's business zoning requirements. He notes the sliver of property isn't even large enough to locate a business.

Leland Summers, the South Carolina division commander for the Sons of Confederate Veterans, declined an interview for this story, but he did say that the group would respond to the zoning complaint.

James Bessenger, the chairman of the separate South Carolina Secessionist Party, said his organization has been boycotting Edisto River Creamery & Kitchen, and he is skeptical that the zoning appeal will be successful.

"He's been grasping at straws for about a year now," Bessenger said of Daras, who is white. "It sounds like a backdoor attempt to me."

Bessenger says he wishes the Sons of Confederate Veterans would have accepted Daras' offer to replace the Confederate flag with the first national flag of the Confederate States of America, which more closely resembles the American flag. But the property owners have the final say, he added.

"If the (Sons of Confederate of Veterans) wants to tell them to go to hell, they can do that," Bessenger said.

In the past, the Sons of Confederate Veterans has argued the continued display of the rebel banner and accompanying monument at the site were meant to stand as a historical marker of a skirmish during the Civil War, not as symbols of hate or racism.

Bamberg sees it differently. "As a society, in general, we need to move forward," he said Thursday. "The South lost the war, and in no other country that I know of is the loser of a war celebrated."

In his letter to the city, Bamberg argues that people can understand the true intent of that particular flag by looking at the man who first put it there: the late Maurice Bessinger.

The barbecue baron, who died in 2014, Bamberg says, was "a well-documented racist and hate-monger," and the only reason he deeded part of the property to the Sons of Confederate Veterans in 2005, Bamberg argues, was to continue "his discriminatory and hateful legacy into perpetuity."

When the property owners raised an even larger Confederate flag at the site after Roof's shooting rampage, Bamberg says it's evident that the Sons of Confederate Veterans' interest in the property is only being used for "discrimination, division, intimidation and hate speech."

For the city's black residents, Bamberg says the flag doesn't remind them of Southern heritage. "To other people, it represents some of the darkest days in American history," he said.

Confederate symbols and monuments on public display across the South, including most recently New Orleans, have been removed from public squares. On Monday, the Greenville City Council gave preliminary approval for a new ordinance that would allow them to block Confederate flags from being flown from city garages, as they were during the 2017 NCAA college basketball tournament.

Rep. Justin Bamberg, D-Bamberg, is representing an Orangeburg business that is trying to remove a confederate flag at the front of their busin…