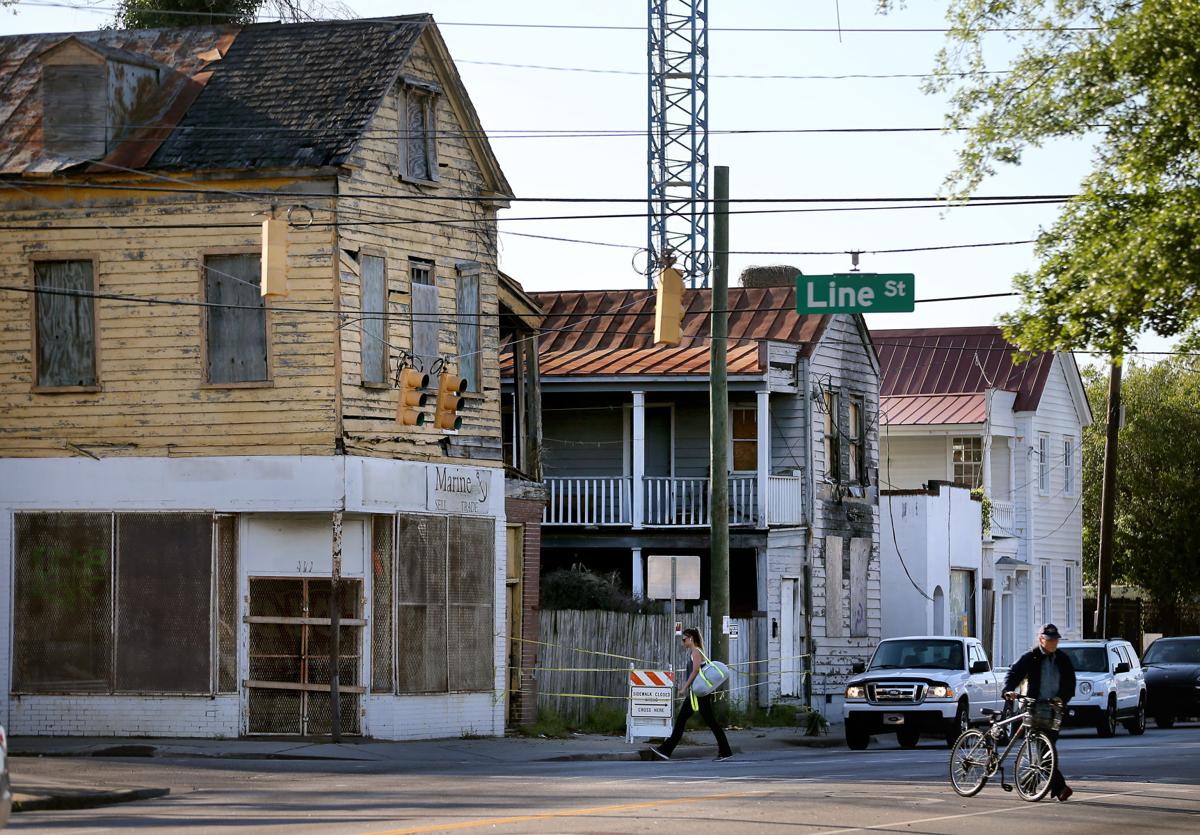 This historic corner store at Meeting and Line streets and the next two homes would be renovated under a plan to redo this block with a major new apartment building. The house on the far right is being redone and is not part of the project. Grace Beahm Alford/ Staff 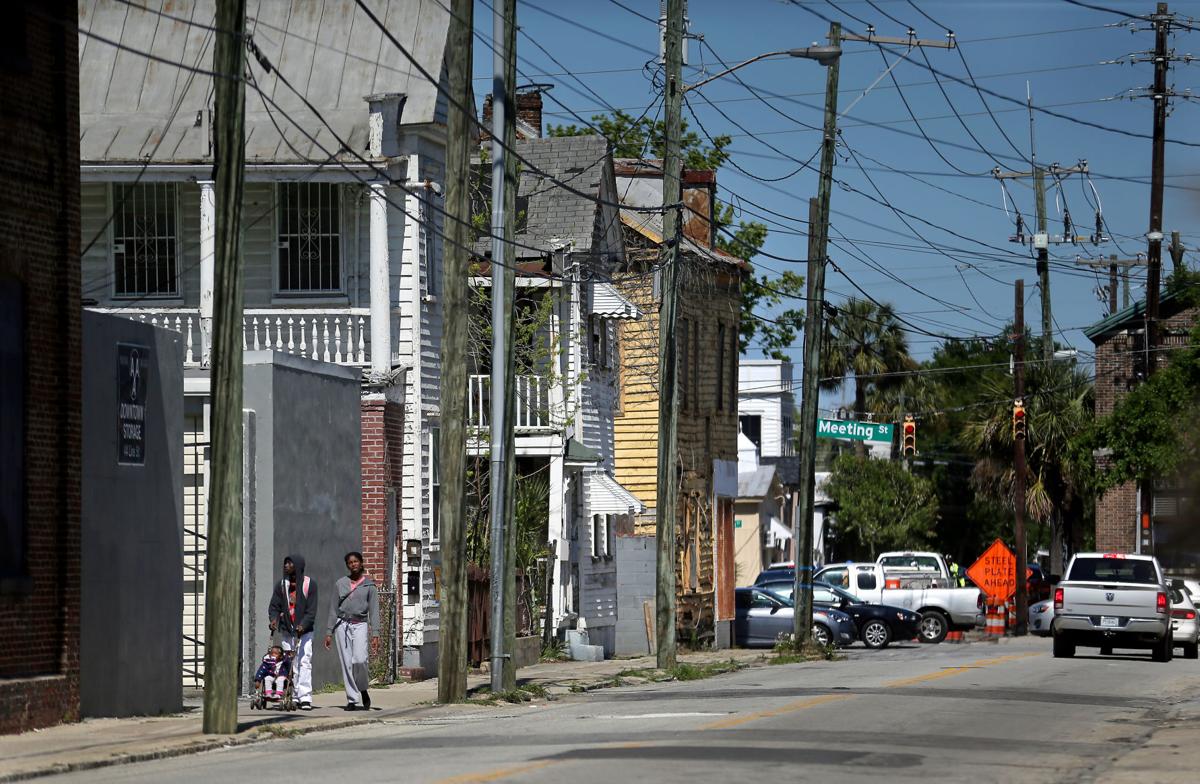 These Line Street buildings also would be rehabilitated as part of a new residential and commercial complex bordered by Line and Meeting streets, the Interstate 26 off ramp and the Lowcountry Low Line. Grace Beahm Alford/Staff 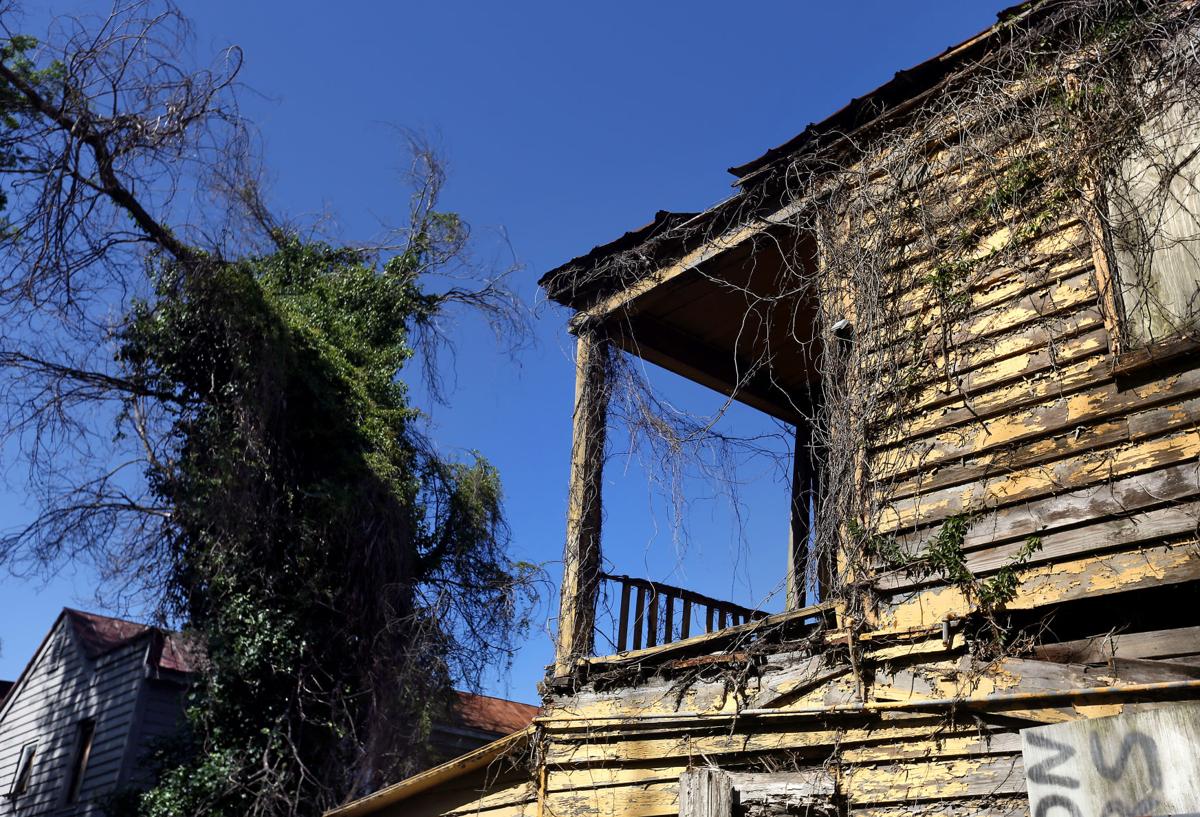 The six historic wood-frame homes near Line and Meeting streets are vacant and in rough shape, but they would be rehabilitated under a plan to redevelop the block. Grace Beahm Alford/Staff 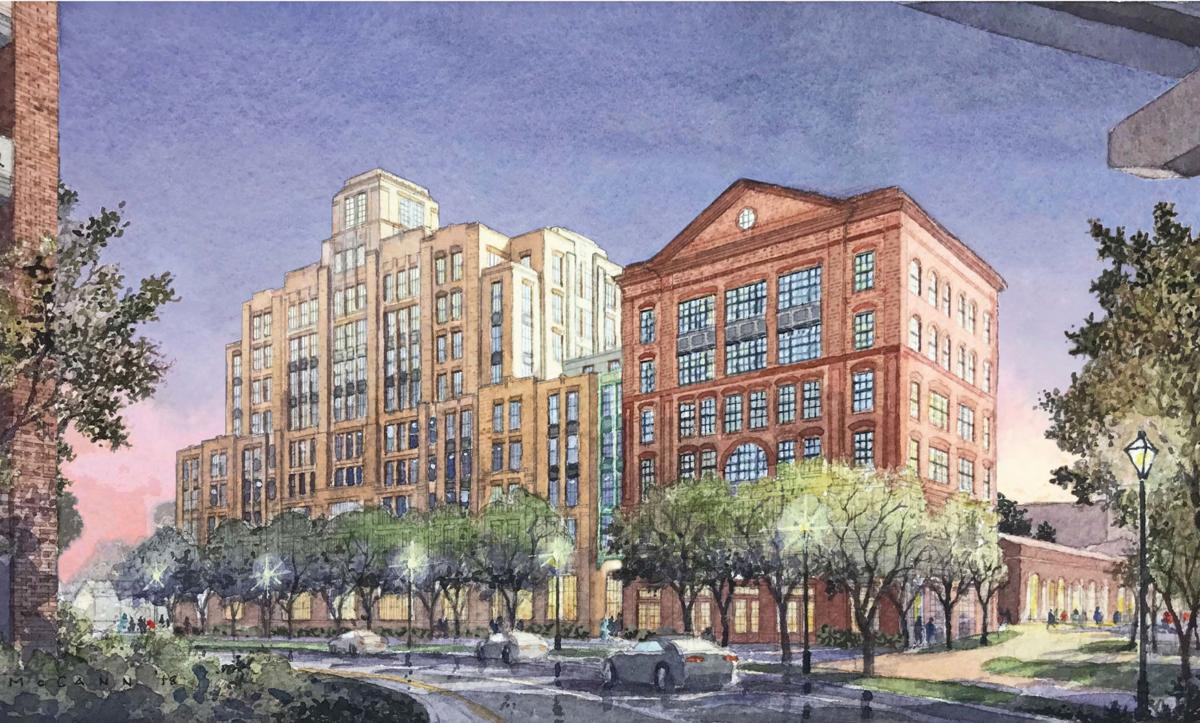 A rendering of the large new apartment building, with the Interstate 26 Meeting Street off-ramp in the foreground. The city’s Board of Architectural Review is expected to review this design on Wednesday. Provided 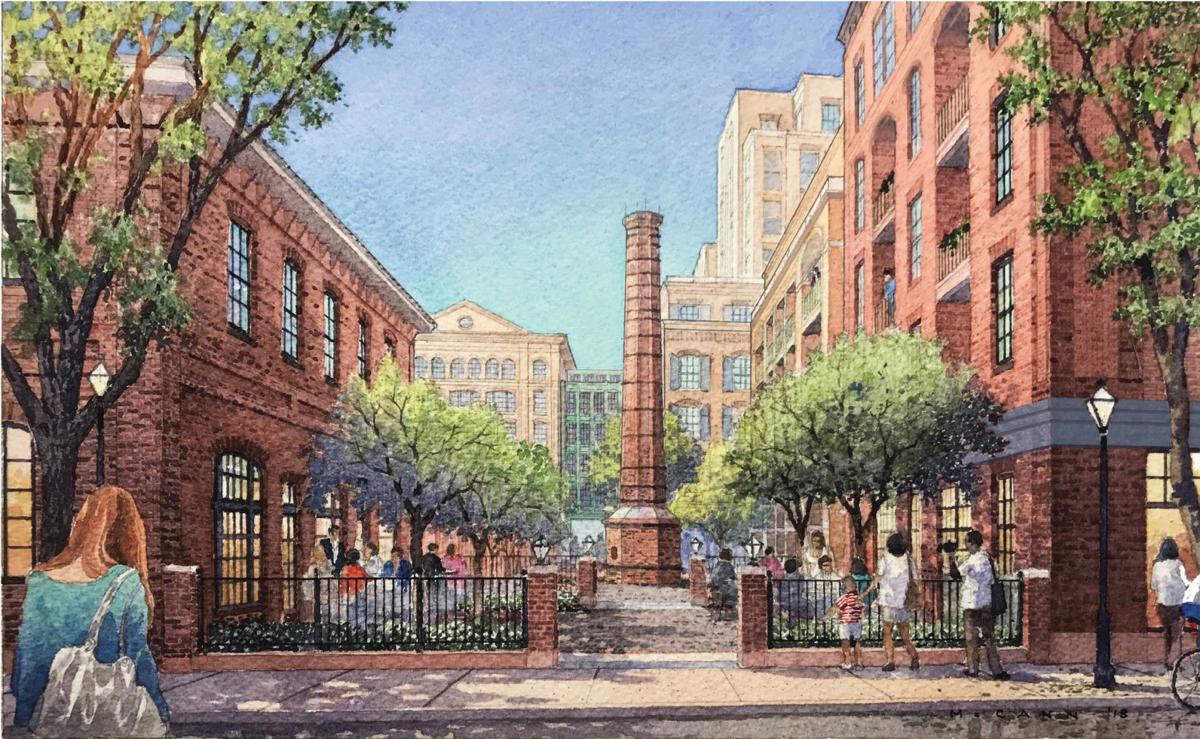 The project would include this alley space between the existing train shed (left) and the new building (right). The property’s existing chimney would serve as a focal point. Provided 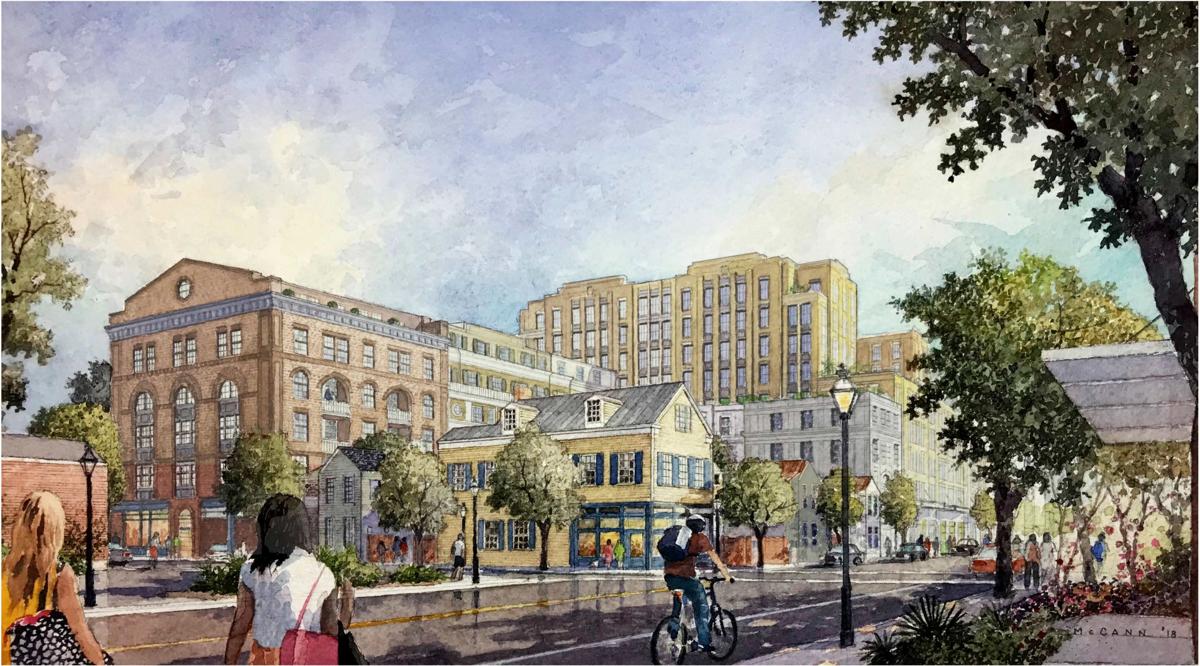 The new project would restore several historic homes near Line and Meeting streets and create a large new apartment building and garage behind them. This rendering shows it looking northwest up Meeting Street, just south of Line Street. Provided

This historic corner store at Meeting and Line streets and the next two homes would be renovated under a plan to redo this block with a major new apartment building. The house on the far right is being redone and is not part of the project. Grace Beahm Alford/ Staff

These Line Street buildings also would be rehabilitated as part of a new residential and commercial complex bordered by Line and Meeting streets, the Interstate 26 off ramp and the Lowcountry Low Line. Grace Beahm Alford/Staff

The six historic wood-frame homes near Line and Meeting streets are vacant and in rough shape, but they would be rehabilitated under a plan to redevelop the block. Grace Beahm Alford/Staff

In its early history, people arrived in Charleston by ship and noticed the city's steeples. Today, most arrive on Interstate 26 and notice a growing cluster of tall buildings.

And the block where Interstate 26 empties onto Meeting Street — currently one of the city's most blighted — could be transformed with yet another tall new building, as well as a restored railroad shed and several newly restored houses.

Justin Ferira, CEO of the Seine Group, is pursuing the redevelopment with LifeStyle Communities, as East Line Partners LLC, and they have hired several separate architectural firms to handle different pieces of the complex project, which involves new apartments, a parking garage and retail space.

Once built, it promises to change the experience for those approaching the city's historic peninsula.

The property is currently largely deserted and a bit desolate, occupied by several vacant single homes in advanced stages of decay, as well as an old railroad shed since converted into mini storage units. The area has struggled for years as three of the city's biggest 20th century projects — the Grace Bridge, Interstate 26 and the Crosstown Expressway — converged here and made it a less appealing place to live.

But change is coming, particularly with the arrival of the Lowcountry Low Line, a linear park along an old railroad right of way that the city bought last year. It will run just west of the site, and the new plan calls for an offshoot of the Low Line to run along the property's northern edge, along the interstate off ramp, to Meeting Street just across from the Cooper River Bridge Redevelopment area.

Ferira recently told the city's Board of Architectural Review that, while dozens of new projects have represented themselves as gateways to the city, "This might be the last one that comes to you and presents itself as the gateway to Charleston."

An exit ramp and an enclave

The uniqueness of the site — and the significance of the project — led Charleston Planning Director Jacob Lindsey to describe the context to the BAR before it even considered the design.

He noted the block is unique because only two of its four sides face streets. The others will face the Low Line and  the new linear park running from the Low Line to the east.

"They don't look like parks now, but in the future, they will be a major part of what makes Charleston a livable place," Lindsey said.

But the property also includes several dilapidated houses that date from the late 19th to the early 20th centuries. The plan is to fix all of them, move a few of them, and concentrate them closer to Line and Meeting streets — a location the developers refer to as "the enclave."

"It's a rare instance that Charleston has the opportunity to take this cluster of historic homes and embellish them to some degree," said architect Kevan Hoertdoerfer.

But it did not allow the demolition of a burned-out single house at 491 Meeting St., nor did it allow the movement of the house at 34 Line St. 7 feet to the west — the house needs a new foundation anyway, so the proposed move would have added minimal extra cost.

The board also deferred plans to renovate the corner store at Meeting and Line streets, which once was a bakery and later a nautical store before it closed.

At 493 Meeting St., most of the debate revolved around whether to allow a one-story brick and stucco addition on Meeting Street to be removed.

"At what point do these carbuncles attain their own significance?" said BAR member and architect Jay White.

The board voted to keep the addition.

Those speaking up at Thursday's BAR meeting praised the plan for the linear park and for restoring the old homes at risk of being lost.

The corner store at Line and Meeting streets, formerly the Beckroge Bakery, has been listed on the Preservation Society of Charleston's "Seven to Save" list.

"We are so delighted to see that this building — we all pass by it and have been waiting for it to fall down — is getting some attention," said Robert Gurley of the Preservation Society. "We think that's great."

Board members were generally supportive of the rehabilitation plans, even those that included demolishing later additions. But board member Jay White and others cautioned about making the new details too nice.

"I know this is now a high rent district, but don't gussy up the buildings to reflect that," he said. "This was the original workforce housing."

But others voiced concern about the scale of the project, particularly the large new building at its center.

Jason Ryan, who lives a few blocks away in Elliottborough, said the proposal is shortsighted and would benefit the developers at the expense of the city's resident and visitors.

"Infill development would be more appropriate for this part of town," he said.

Joseph Watson of the Eastside neighborhood, said his main concern was the new stress that would be put on the streets, particularly Line Street, where the garage's entrance and exit would face.

"You're creating a traffic jam every day on the project," he said.

Like several downtown sites that once held industry, the East Line project is a voluntary cleanup site. Part of the property once held a railway operation, including lumber storage and a train shed. It also once held an auto shop and gas station. An agreement with state regulators requires soil and groundwater testing — and follow-up if such tests ever find significant contamination.

On Wednesday, the board will review and vote on other major aspects of the project, including the renovation of the old train shed at 44 Line St. and demolition of a one-story addition next door.

The railroad shed has long been underutilized, said architect Glenn Keyes, who is working on that piece, which will involve repairing the timber frame ceiling inside.

"It's going to be a centerpiece of this development."

But the major debate is expected to revolve around the replacement building that will dominate the site — and the view of downtown Charleston for those approaching from the interstate.

For the main building, the developers hired architect Gary Brewer of Robert A.M. Stern Architects, who also designed the Courier Square project being completed a block to the south.

Like Courier Square, whose design resembles two large, abutting buildings, Brewer's initial plan would be to have the new Line Street building broken into as many as nine different looking buildings. The buildable footprint is "P" shaped, with its leg (and parking garage entrance) touching Line Street.

The building, which would reach nine stories at its highest point, plus a small 10-story tower, was shaped to fit within the city's new height limits, respect older neighboring buildings by being five floors or less next door to them, and create some common park space on the site, including a courtyard whose feature would be an existing brick chimney. The building also would mask its internal parking garage on all sides.

White voiced doubt about whether the main building should consist of many different architectural styles, adding he found that approach at Courier Square "highly problematic."

The board also will review a proposed single-story building that would house a commercial kitchen, restrooms and other restaurant support functions, and would connect to three of the historic properties.

That public discussion will continue this week.

Tana Zaffino of Lifestyle Communities said the project blends with her company's mission, which is to build places for people to engage and connect. It has done other apartment complexes in Columbus, Ohio; Louisville, Ky.; and Nashville, Tenn., and it builds with the long-term in mind.

"We do not build them to sell," she said, "and that makes a real difference about how we think of architectural design."