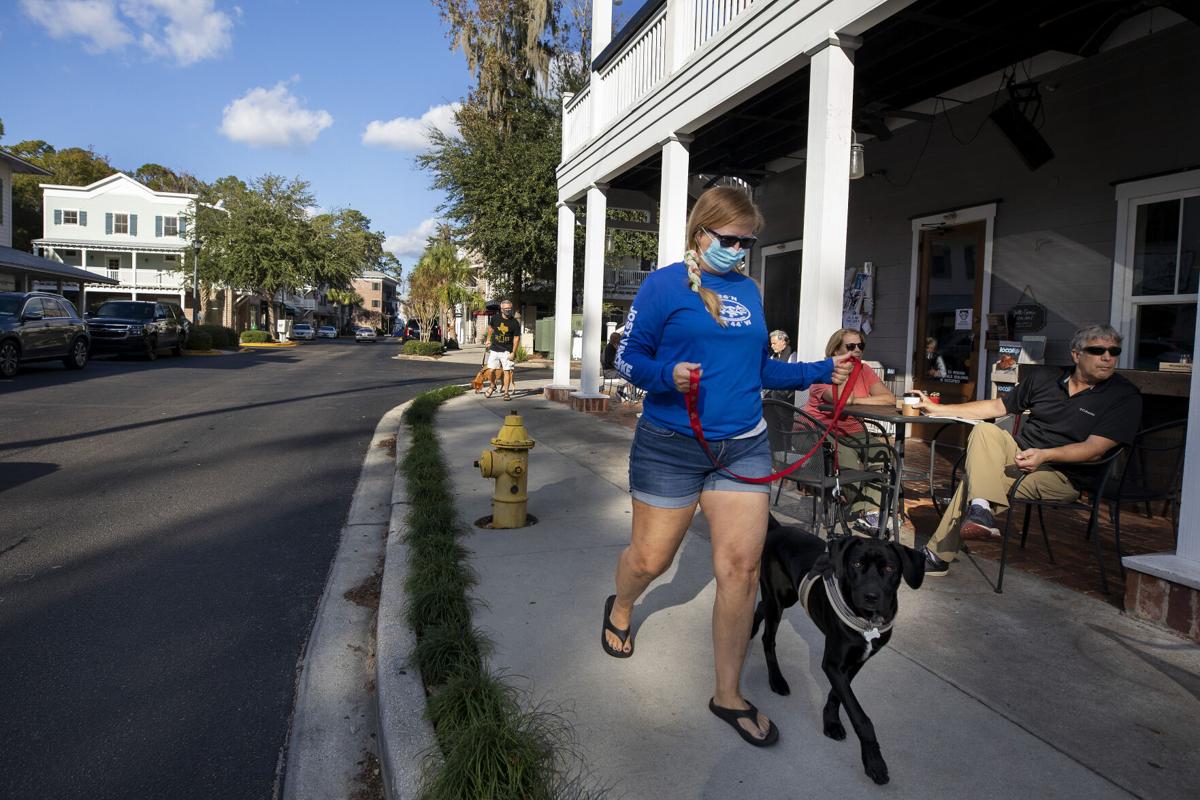 Newly arrived Bluffton resident Kristi Moen walks Cooper while out with Tom Thompson, who is walking Mojo, Monday, Nov. 23, 2020, in the town's historic center. The recently retired couple from Chicago visited Bluffton in June and fell in love with the area. Grace Beahm Alford/Staff 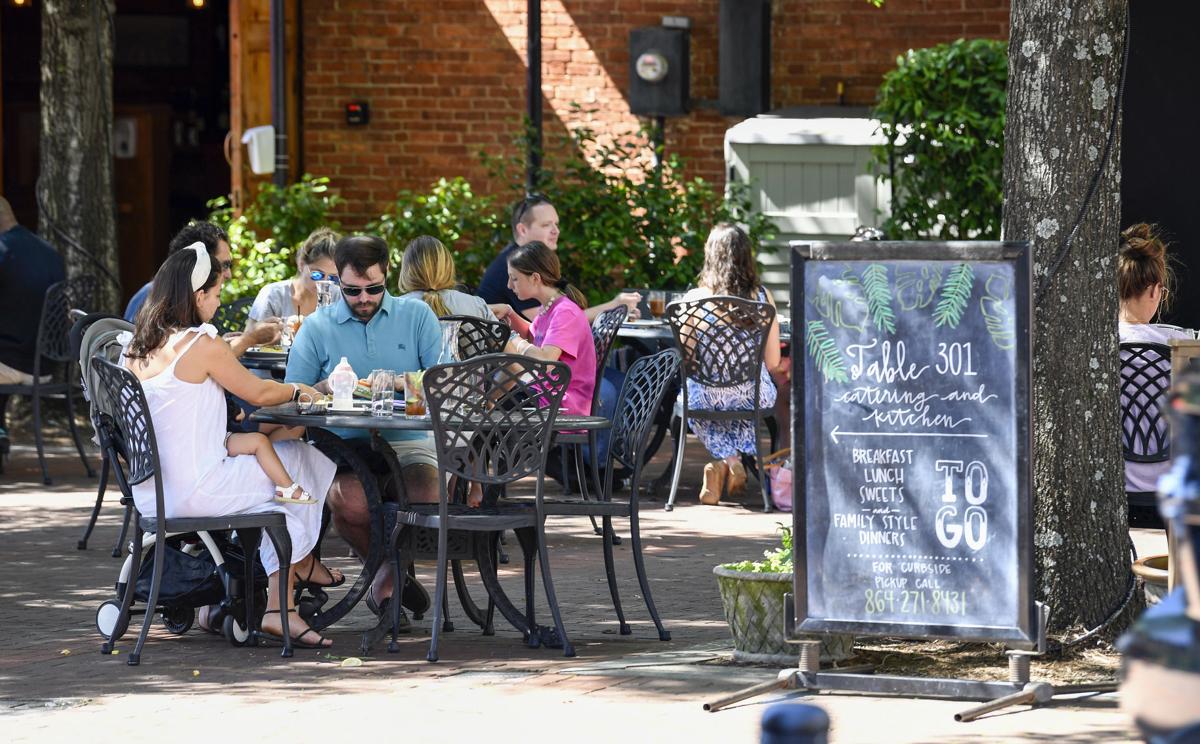 Diners enjoy a meal streetside at Soby’s on Main Street in downtown Greenville, Saturday, June 13, 2020. File/Bart Boatwright/Special to The Post and Courier 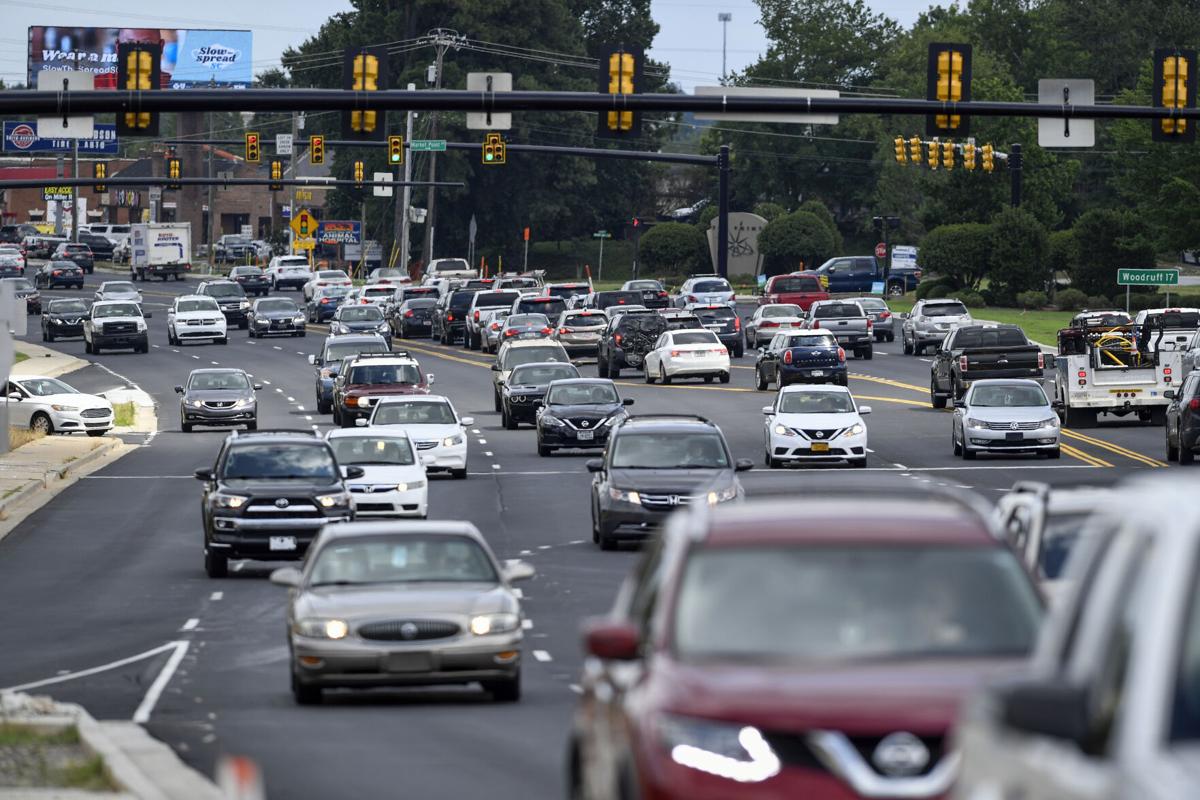 Woodruff Road in Greenville on Friday, July 30, 2020. File/Bart Boatwright/Special to The Post and Courier 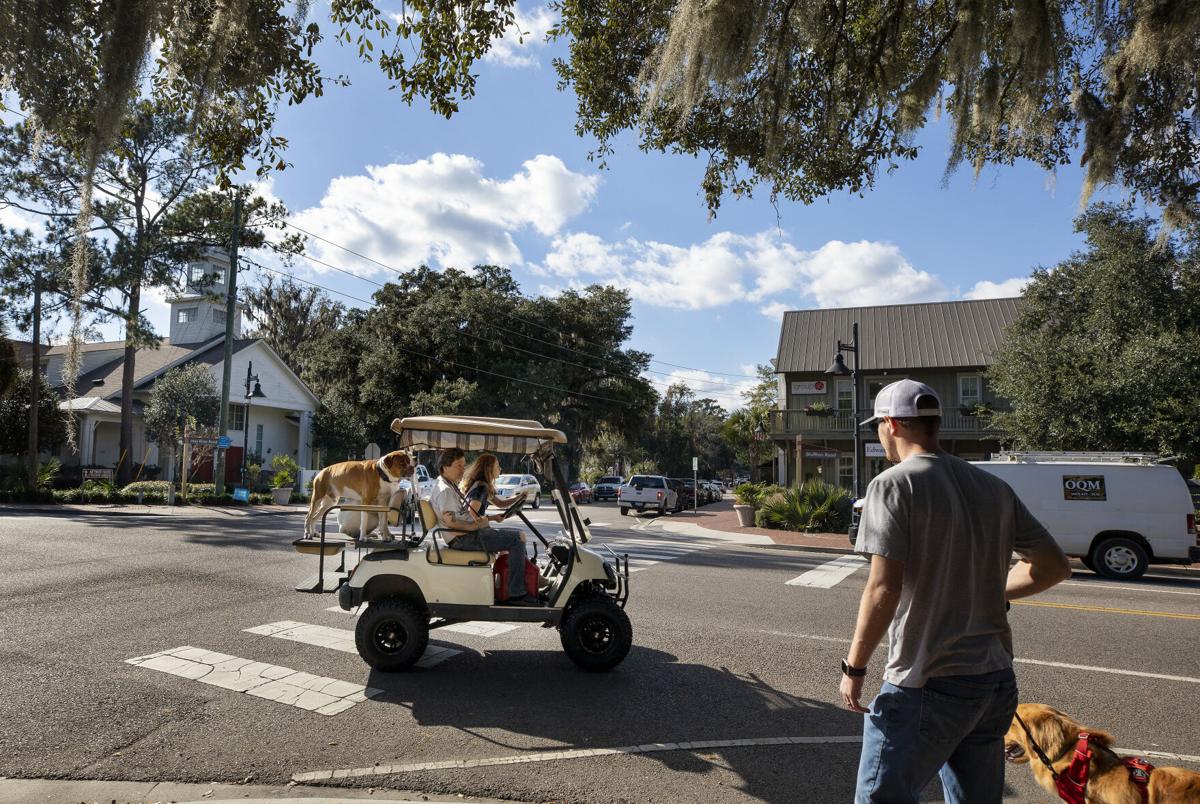 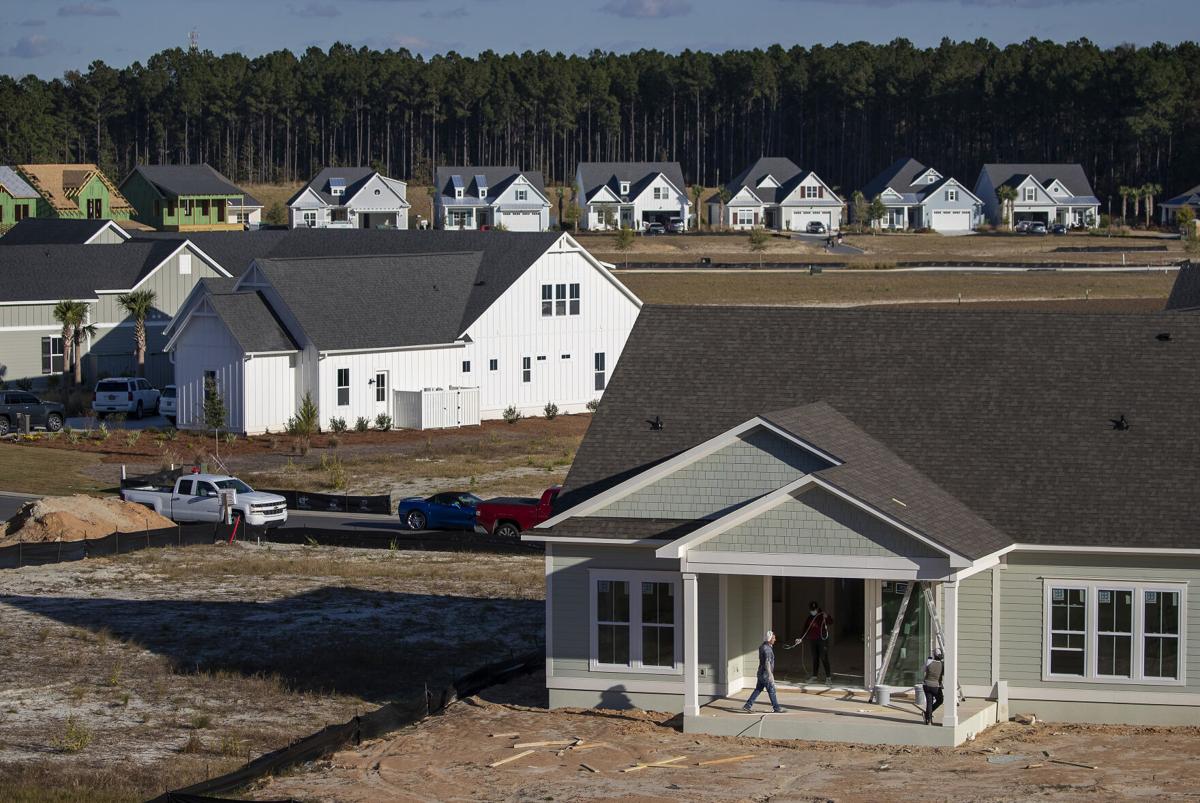 Homes are under construction in the new Hampton Lake neighborhood off Bluffton Parkway, Monday, Nov. 23, 2020, in Bluffton. Grace Beahm Alford/Staff 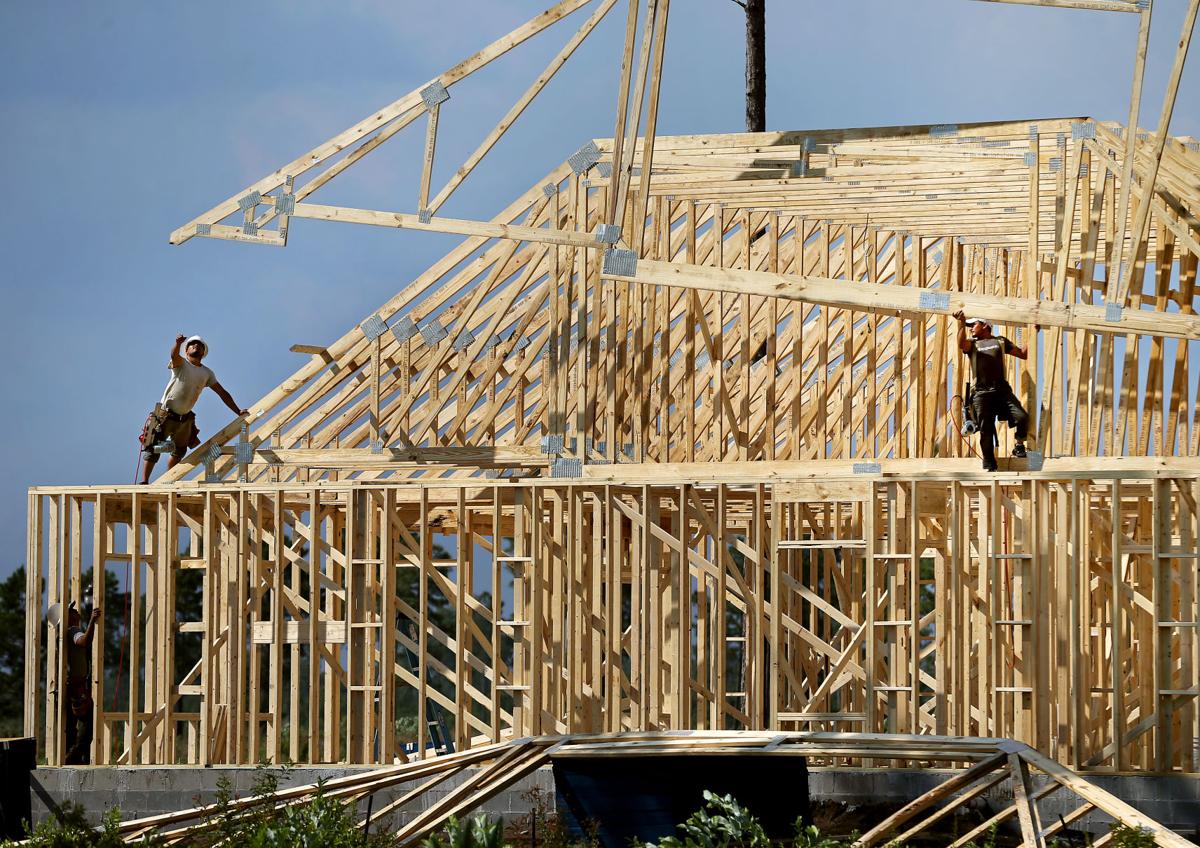 Construction continues in Carolina Forest in the Indigo Bay neighborhood, one of the largest developments in Horry County on Wednesday June 15, 2017. File/Grace Beahm Alford/Staff

Extremely rapid population growth, long a feature of South Carolina's coastal communities, has become a challenge faced by towns and cities scattered across the state.

Some are swelling with Northern retirees, others with commuters who work in North Carolina, and many smaller communities are filling with new faces as metropolitan areas expand.

These growth hot spots are part of a larger, long-term shift of population and resources in South Carolina. Urban and suburban areas continue to grow while most rural communities slowly fade.

South Carolina has 46 counties, and the state estimates that Greenville County will have more residents than 24 of them — combined — by 2035. By then, Horry County could have the state's second-largest county population, more than 600,000.

"A shrinking city is far worse than a growing city,” said Adam Emrick, city manager of Conway in Horry County.

The fastest-growing towns and cities since 2010, with at least 20,000 residents.

Among the 144 towns and cities that gained population since 2010, just 32 of them, including Conway, accounted for 90 percent of the growth. Some were large cities, some were very small towns, and all of them are working to balance the benefits and challenges of very rapid growth.

"We are excited by the things growth can bring us," Emrick said, noting that rooftops and traffic attract businesses and the jobs they bring. "You don’t want a sea of subdivisions, and that’s a struggle, a balancing act we have to do."

In areas close to thriving towns and cities, population growth has radiated out like ripples on a pond, as developers seek large tracts of land and residents look for affordable housing.

In the Charleston area, Mount Pleasant received lots of attention for being one of the fastest-growing large cities in the nation. But smaller Hanahan has grown even faster, with a roughly 50 percent increase in population since 2010.

Beaufort County has seen growth flow outward from Hilton Head, first to Bluffton and more recently to Hardeeville and across the county line into Jasper County. Likewise in Greenville County, the city of Greenville is growing fast, but nearby the smaller cities of Greer and Simpsonville are growing even faster.

In Horry County, Myrtle Beach's neighbor, Conway, has seen some of the most rapid population growth in the state, a 52 percent increase since 2010. And Charlotte has driven a surge of population across the state line in Fort Mill, S.C., and elsewhere in Lancaster and York counties.

It's been a very uneven distribution of growth across the state. There are 271 towns and cities in South Carolina, and 127 of them had smaller populations in 2019 than they did when the 2000 census was conducted.

Some of the fast-growing cities are still in the honeymoon phase, excited to be loved and hopeful for a brighter future.

In the town of Lexington, near what was once South Carolina's largest city, Columbia, Mayor Steve MacDougall said growth that's boosted the town's population by about 25 percent in a decade has been very positive. He said it's resulted in new places to shop and dine, and property taxes have helped the town's budget.

“With growth, a lot of different opportunities come," he said. “During this pandemic, we’ve actually reduced taxes and put $1 million on the street for local businesses to borrow at low interest."

Mount Pleasant residents may have had similar feelings in the 1970s and 1980s, when the town's population more than doubled, two decades in a row, to just over 30,000.

But the rapid growth continued and wore out its welcome in the town, which now has about 90,000 residents. In the past decade voters replaced most of the town's elected officials and the town raised impact fees, imposed annual limits on building permits and put a moratorium on apartment construction.

No more winters in Chicago

Across South Carolina, fast-growing places are trying to keep ahead of problems growth can bring — more traffic, crowded schools, a lack of affordable housing and a loss of green spaces.

The small city has dramatically expanded its boundaries through annexation during the past 15 years, growing from 5 square miles to 55. It now wraps around most of Bluffton, and, with impact fees in place, Hardeeville is poised for the next wave of growth radiating out from Hilton Head.

“All of us, we have to do smart growth, and that’s really hard," Williams said. "If it’s not right, we don’t need it."

Kristi Moen and Tom Thompson, a retired couple from Chicago, came to visit Bluffton in June. Months later they were Bluffton residents, walking their dogs in the historic center of town.

"We thought, why are we going to spend another winter in Chicago?" Thompson said during his walk Monday.

Robert Merchant, Beaufort County's acting director of planning and zoning, said the growth all began with Hilton Head Island. Once a sparsely populated barrier island known for timber, its growth took off after the mid-1950s when a bridge to the mainland was built. It's now home to about 40,000 and a popular tourist destination.

"In the early 1990s, that development started to spill over onto the mainland," Merchant said.

The Sun City retirement community, with more than 5,000 homes, transformed unincorporated Beaufort County. Bluffton, which had been a 1-square-mile historic town on the May River, began annexing land and growing.

One thing that's unusual in Bluffton is that an estimated 92 percent of the town's 54 square miles is covered by development agreements — multidecade contracts allowing much of the growth that's still to come, under regulations agreed to years ago.

New developments in Bluffton are required to make 20 percent of the housing affordable, but that rule doesn't apply to the many older ones with multidecade development agreements.

In response to the growing population throughout Beaufort County, the county and local governments have beefed up stormwater rules to prevent oyster beds from becoming polluted.

Bike lanes, trails, and more roads have been added and the county has protected green spaces through purchases of property and development rights. Extra sales taxes and an impact fee for transportation helps pay the bills.

Spilling over the border

Across the state, just below North Carolina line, Fort Mill has been South Carolina's fastest-growing large municipality since 2010. Its population has more than doubled, exceeding 22,000 last summer.

The town along Interstate 77 has essentially become a bedroom community for Charlotte, and nearby Rock Hill and Tega Cay are also growing rapidly. Some Fort Mill residents could drive from their subdivision to the nearest Charlotte light rail station in less than 20 minutes.

“We are all talking to each other to see how we can manage growth," she said. “Change can be good, and change can be bad, and we’re trying to balance that."

One way Fort Mill has sought a balance is, since 1996, the Fort Mill School District has collected substantial impact fees on new homes, authorized by York County. The district has built 14 new schools during that time, and the impact fee is currently $18,158 for every new home and more than $12,000 for every apartment or condo.

Based on current trends, South Carolina projects that York County, with about 289,000 residents, will gain another 133,000 by 2035. Neighboring Lancaster County can expect its population to grow by 57 percent, about 60,000 people, in those next 15 years. Both counties are considered part of the Charlotte metropolitan area.

Andrew Merriman, Greer city administrator, used to work for Fort Mill and was York County's deputy administrator, so he knows the challenges and benefits of rapid growth. Greer's population has increased by more than 30 percent since 2010, and the former mill town has become a thriving city between Spartanburg and Greenville.

"We have maybe one vacant building (downtown), and it’s only vacant because it’s being renovated," Merriman said. “The business owners that have invested downtown are all-in.”

He said Greer's future growth will likely come from annexing surrounding areas. That will provide opportunities to negotiate with developers, and Merriman said Greer is starting to discuss impact fees.

“The challenges in Greer are no different than you would see in Berkeley County or Charleston County," Merriman said. "It’s going to be infrastructure."

Most towns, cities and counties want population growth, just not all at once. A shrinking population means a shrinking tax base, businesses suffer and the government may struggle to maintain infrastructure such as sewer lines and roads that were built for a larger population.

Many communities across the state face that reality now.

For those that are growing, the type of growth matters. Growth can come from having a positive birth rate or from people moving in from elsewhere, and most of South Carolina's growth has been the second kind.

Among the 100 counties in the nation that saw the largest population gains from people relocating domestically during the past decade, seven are in South Carolina.

York, Spartanburg, Berkeley, Lexington, Charleston and Greenville counties have positive birth rates, but in each county the arrival of new residents from elsewhere accounts for most of the growth. In York County, 87 out of every 100 people added to the population moved in from other parts of the U.S.

So many people have relocated from other states that South Carolina natives account for less than half the population in several counties. In Beaufort County, by 2010 less than three in 10 residents were born in the state.

“People are flocking to South Carolina from all over, and particularly from the Northeast," said Williams, Hardeeville's mayor.

Until 2015, Williams lived in New Jersey.