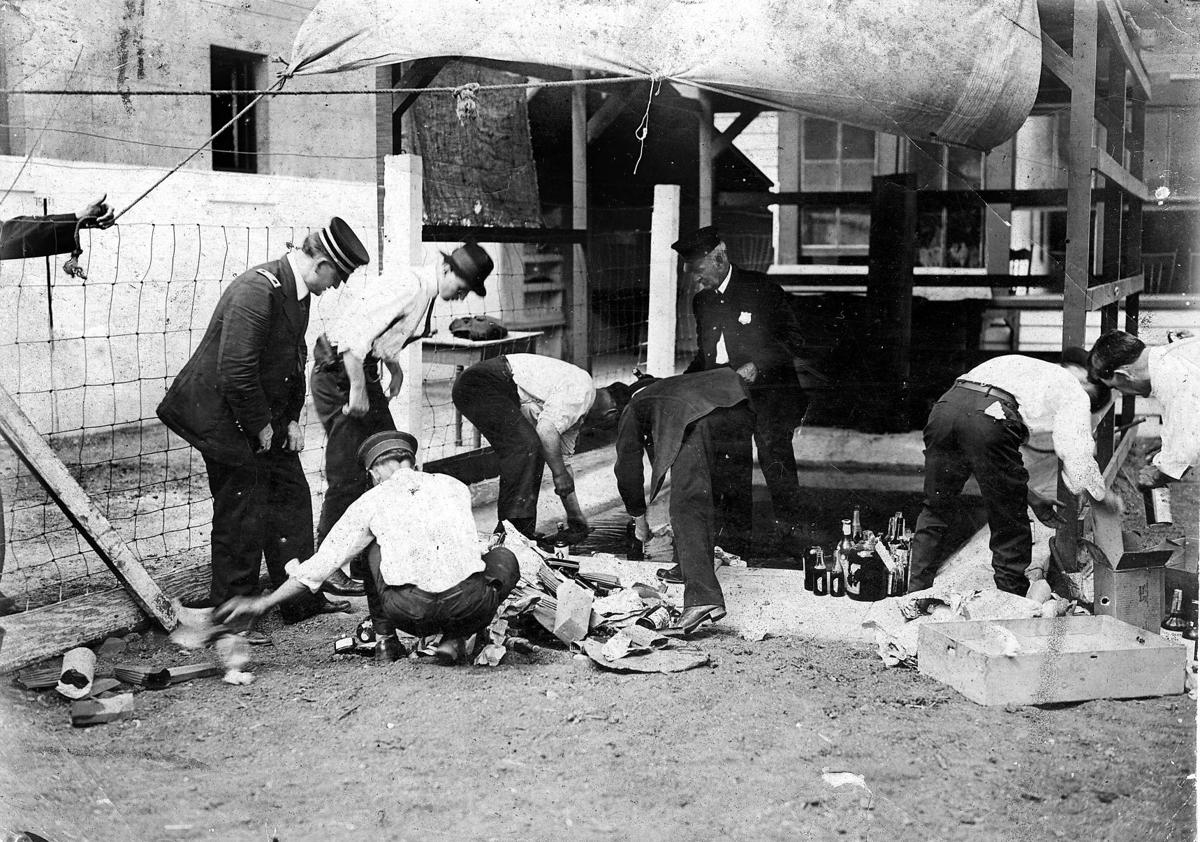 Charleston police dispose of liquor seized in a raid before federal prohibition, but when the state had stringent whiskey laws and as momentum for the prohibition act was building. File 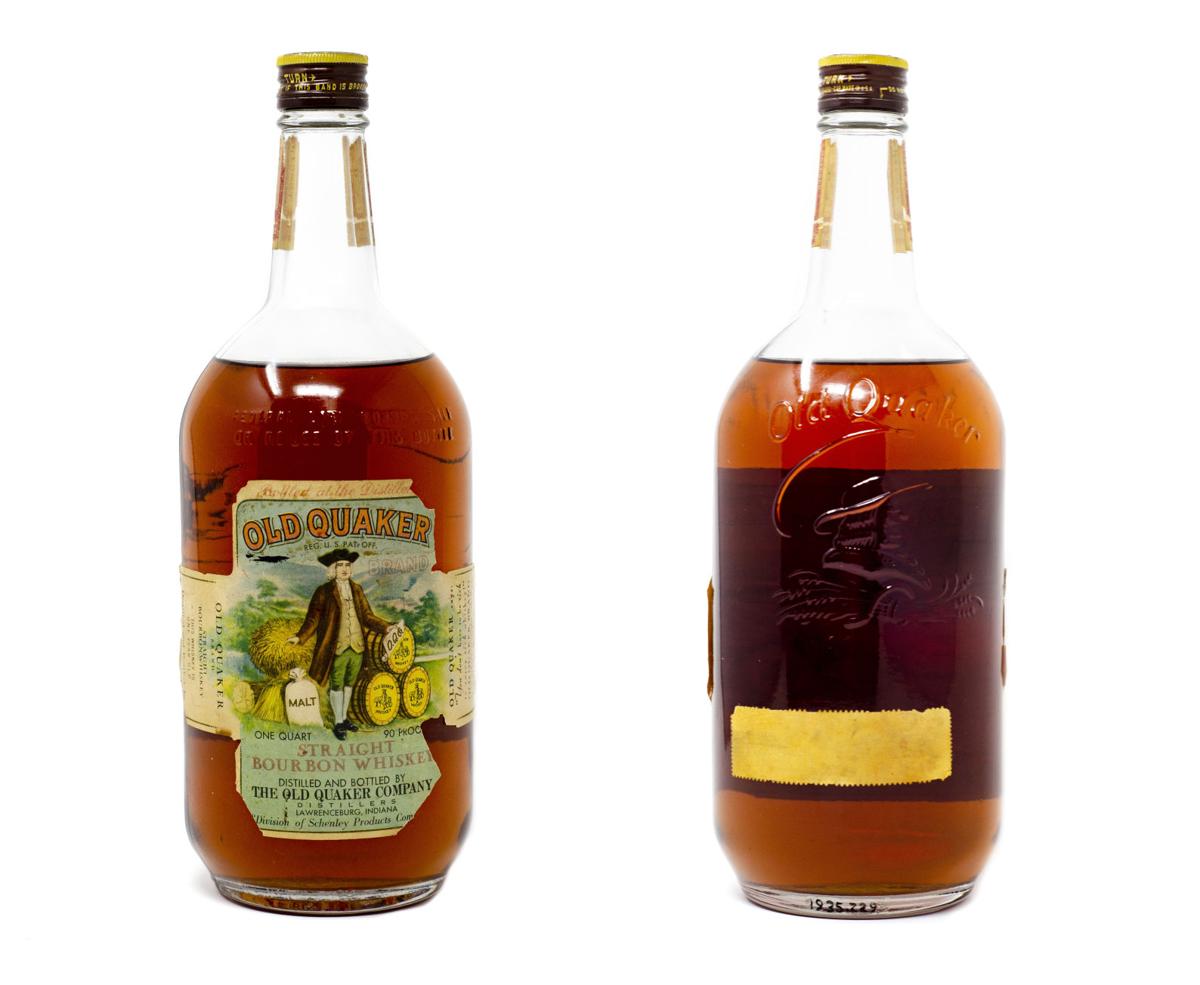 This quart bottle of Old Quaker was the first bottle of booze sold in Charleston in 1935 after the state's "Liquor Act" was signed. Charleston Museum/Provided 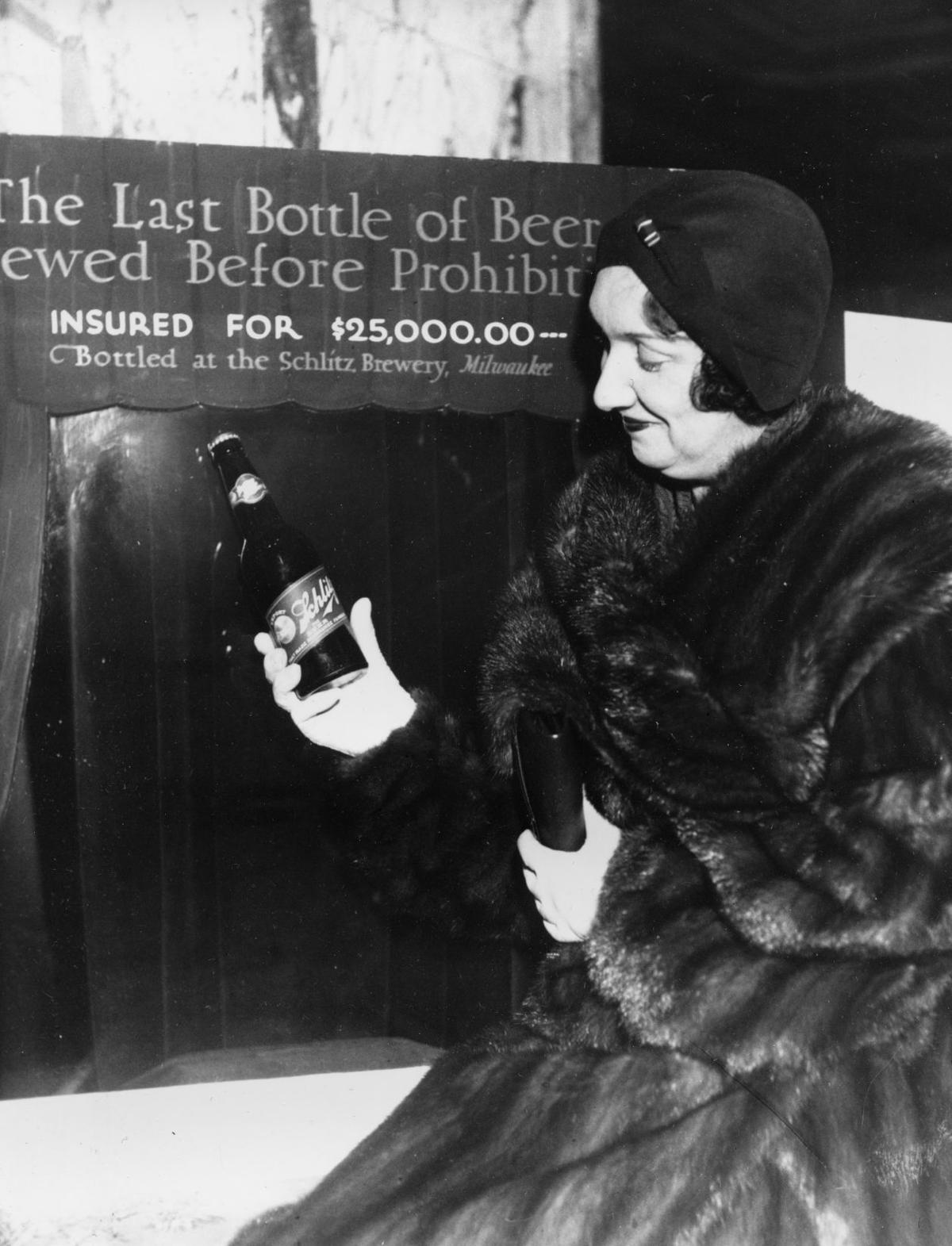 Vaudeville actress Rae Samuels holds the last bottle of beer that was distilled before prohibition went into effect in Chicago, Ill. The bottle of Schlitz was insured for $25,000. In 1916, nearly four years before the 18th Amendment would pass, South Carolina enacted its own statewide prohibition. File/AP

Charleston residents drank with a purpose on New Year's Eve 1915.

The following morning, it would be illegal to buy spirits in South Carolina after the state Legislature passed a law enacting statewide prohibition.

That was four years before Congress killed "intoxicating liquors" nationally.

As America marks the 100th anniversary of prohibition (the Volstead Act took effect in January 1920) the record shows South Carolinians began fighting the temperance movement long before the federal government mandated a ban on booze.

Speakeasies and rum-runners, stills and "blind tigers" all became part of the vernacular as drinkers tried to get around authorities.

The booze battle raged at the state level from the early 19th century until the new millennium and has defined much of the state's drinking and dining culture. In short: Charleston and the backwoods were thirsty; preachers notched in the Bible Belt weren't.

Attempts at regulation took many forms: Running a statewide dispensary that was responsible for the manufacturing, distribution and sale of booze to every county in the 1890s and most recently in the form of only allowing alcohol to be sold at bars in mini-bottles until New Year's Day in 2006.

These laws decided in Columbia have been trying to put a damper on Charleston's good time for decades. But the party didn't stop, as historians have noted.

"The battle was between the religious Upstate and the desolate Lowcountry," said David Shields, a University of South Carolina English professor who specializes in food and dining history.

"But Charleston was drinking all throughout prohibition in all sorts of secretive ways."

Temperance hit Charleston harder than a shot of 100-proof moonshine.

South Carolina's first temperance society started in 1829, according to research by The Charleston Museum. By 1847, the national Sons of Temperance set up a division in the Palmetto State. They began lobbying hard.

"Residents had been talking about the temperance in government as far back as the War of 1812," said Grahame Long, the senior curator at The Charleston Museum. "All of society's ills were being blamed on it."

Gov. Ben Tillman came up with a progressive idea in 1892: Instead of embracing prohibition, it would monopolize the entire alcohol industry under the government.

It had been used in Europe and he thought it could be used stateside to appeal to the religious majority who wanted regulation, as well as those in favor of drinking.

A state board regulated pricing, appointed distributors and divided profits from the sale of alcohol equally between the state as well as the counties and cities. It prohibited the manufacturing of liquor.

But the money didn't get evenly distributed, and the officers tasked with enforcing the law were the ones most frequently profiting from it.

"It was a corrupt system," Long said. "It was a way for officials to fill their pockets. It was a disaster."

While not successful in regulating the distribution of alcohol, it did wreak havoc on Charleston's restaurants and bars.

In an 1893 city directory, 248 establishments were identified as saloons, according to Shields. The following year, the saloon section of the directory was empty.

The dispensary system didn't stop residents from making muscadine wine, moonshine or even rice beer for themselves. Bootleggers were rampant, and speakeasy-style establishments known as "blind tigers"  became popular.

A 1906 story in The Evening Post described an epidemic of illegal booze huts propping up in the Palmetto State and especially the Holy City.

"There are nearly two and a half times as many 'blind tigers' in the state a legal selling establishments," the article said. "But it is in Charleston that the 'blind tiger' particularly thrives. Here he abides and does business with but little interference."

Law enforcement tried cracking down, but to little avail. A 1907 Evening Post story detailed five officers and a chief who left the city because they were overwhelmed by the problem.

Looking to get in the holiday 'spirits'? Here are Charleston's 12 cocktails of Christmas.

"It has been pretty well understood that the 'tigers' had come to stay, and the most the liquor officers could expect to do was to keep them in check," the article stated.

With the spread of illegal booze becoming more prevalent, the dispensary system was shut down in 1907. But it wasn't all whiskey and bubbles.

In 1916, nearly four years before the 18th Amendment would be ratified and cap the flow of alcohol throughout America, South Carolina lawmakers enacted statewide prohibition.

Police stepped up their game.

Nationally, prohibition was a failure. Crime rose and so did deaths from poorly made bathtub gin. On Dec. 5, 1933, the 21st Amendment was ratified, repealing the 18th Amendment and ending the prohibition of alcohol in America.

Most of the country was popping bottles, but South Carolina didn't even crack a beer.

"The 21st Amendment returned the regulation back to the states," Long said. "And South Carolina had no interest in the new law."

It would be two more years before then-Gov. Olin D. Johnson, a strict opponent of alcohol, caved to the masses believed to be on the verge of riot and revolt.

“I personally deplore this,” he said just before signing South Carolina’s “Liquor Act” on May 15, 1935.

Two weeks later, then-Charleston Coroner John P. Deveraux Jr. walked toward a liquor store on President Street to make history. He was about to buy the first legal bottle of alcohol in the city. After plopping down $1.75 (that's equal to nearly $18 in today's money), he walked out with a quart of Old Quaker bourbon whiskey, according to the Charleston Museum.

It had been a battle that had stretched decades, one that nearly crippled the restaurant and bar scene in the city. Men and women had been arrested, legal battles and debates plagued Columbia. It all had led to this moment.

Deveraux didn't uncork the bottle. He never took a sip.

He walked it over to the Charleston Museum and donated it for "posterity," an Associated Press article detailed.

That bottle is still unopened to this day.