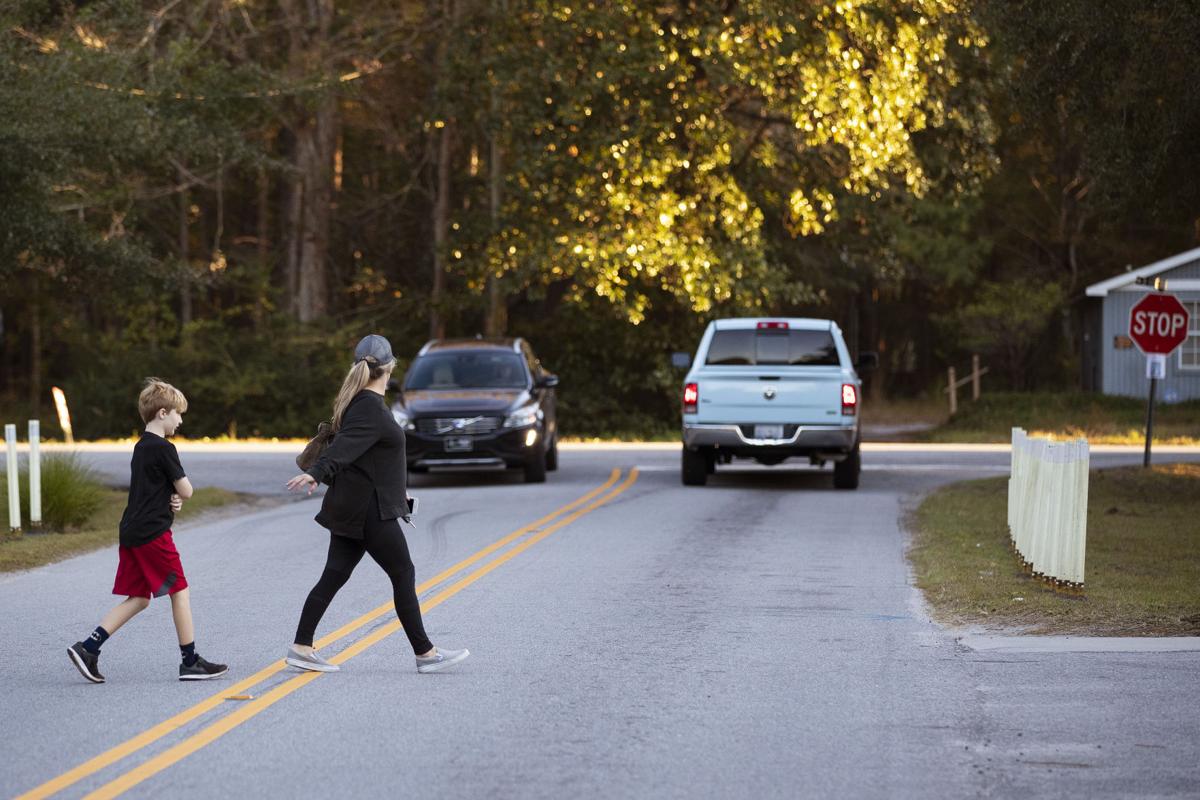 A woman and her son cross Southwick Drive to go to the Sea Island Habitat for Humanity ReStore on Johns Island on Thursday, Nov. 21, 2019. Lauren Petracca/Staff 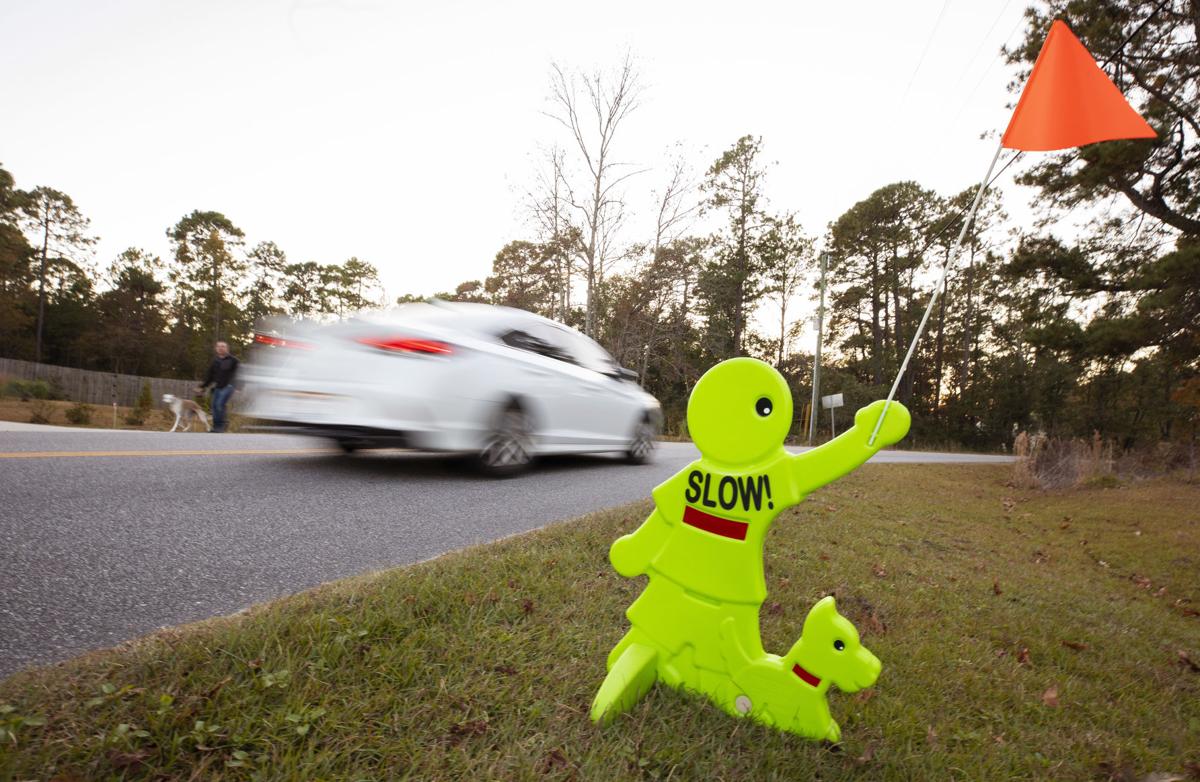 A sign telling drivers to slow down sits in a resident's yard on Southwick Drive on Johns Island on Thursday, Nov. 21, 2019. Lauren Petracca/Staff 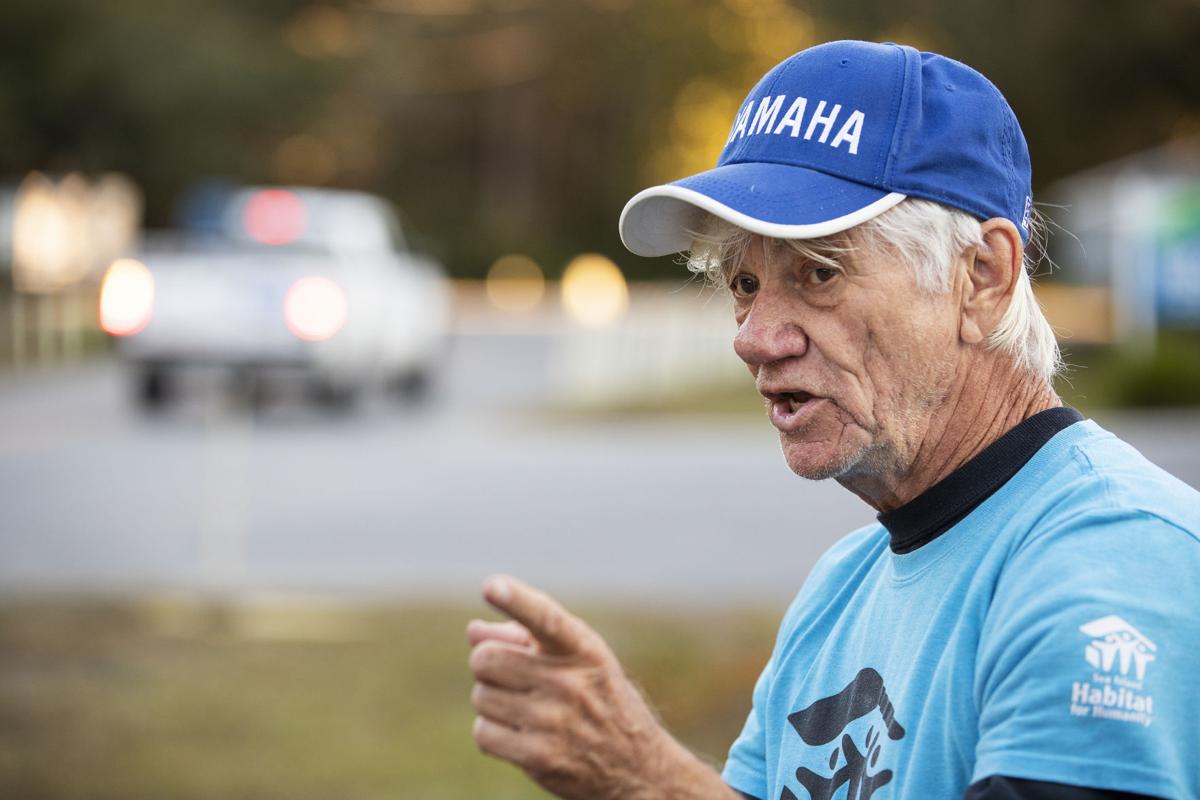 Pete Salvo, an employee at the Sea Island Habitat for Humanity ReStore, talks about the dangerous traffic for pedestrians on Southwick Drive on Johns Island on Thursday, Nov. 21, 2019. "My main concern is the customers," he said. Lauren Petracca/Staff

For the past three years, residents of a Johns Island neighborhood have been increasingly worried about heavy traffic and speeders they say are putting the public at risk.

Along Maybank Highway, in front of the Sea Island Habitat For Humanity ReStore, cars zoomed past on a recent Thursday afternoon. Southwick Drive, a small street that leads into a residential neighborhood, has seen a growing number of drivers in recent years, residents say. Many drivers pay little attention to its 35 mph speed limit and whip around the intersection at Maybank making unsafe turns at a corner that sees heavy foot traffic from the ReStore and children dropped off at a school bus stop.

Pete Salvo, a resident of the neighborhood and a retired Charleston firefighter who works at the ReStore, said there's been fatal crashes at the corner of Maybank and Southwick before, and it's only a matter of time before more people are killed, unless something is done to make Southwick safer.

"I've almost been run over," Salvo said. "An elderly lady was killed here a few years ago. Up until three years ago, you'd hardly see any cars. Once people started moving in, that changed. These people don't know what 35 mph is."

As he spoke, a van turned right from Maybank onto Southwick and accelerated, its engine revving loudly.

"See," Salvo said. "I call it the Southwick Autobahn."

As more people have moved to the area, Southwick Drive and other residential streets have turned into shortcuts for drivers looking to avoid major thoroughfares like Maybank Highway and Main Road, he said.

Salvo and other residents say they'd like to see speed humps or other infrastructure to slow traffic down, but have been frustrated by what they say is a slow response by the S.C. Department of Transportation, which owns Southwick Drive.

Salvo plans to gather signatures for a petition to install speed humps and present that to the city. About a month ago, he spoke with Mayor John Tecklenburg, who told the retired firefighter he shared his concerns and that he'd send some city personnel out to assess the situation.

But Southwick is a state-owned road and speed humps may not be a viable option because DOT guidelines prohibit installation on roads with speed limits of more than 25 mph.

Josh Johnson, an DOT district traffic engineer for an area that includes the tri-county, said he's heard residents' concerns and that his agency is working with county and local government to address traffic-related issues wherever they arise.

They are also working with developers to ensure that traffic impact from new homes, apartments and other residential development is taken into account, Johnson said.

"We certainly are providing input," the traffic engineer said.

The issues on Southwick, meanwhile, are far from unique.

Charleston and surrounding areas are continuing to grow. More drivers on the roads has led to congestion and high crash rates.

A Post and Courier analysis of S.C. Highway Patrol statistics earlier this year found that more than 900 pedestrians and bicyclists have been killed on South Carolina roads in the past six years, and a report this year by the nonprofit Governors Highway Safety Association ranked South Carolina as having the nation’s sixth-highest pedestrian fatality rate per 100,000 residents.

Hundreds of SC pedestrians and bicyclists are dying. Here's how some hope to change that.

Other parts of the Charleston region have seen traffic issues and fatal crashes this year.

In April, a 19-year-old driving 70 mph in a 40 mph zone on Rifle Range Road in Mount Pleasant was killed along with his passenger.

During a two-day period around July 4, four major crashes involving a pedestrian or bicyclist were recorded near Summerville, on James Island, in Mount Pleasant and North Charleston. In all, three people died.

On Sept. 30, a utility truck caught low-hanging wires and pulled them down at Maybank Highway and River Road on Johns Island. The incident shut down the intersection, which is one of two ways off the island, for nine hours, causing major gridlock that spread deep onto James Island and West Ashley.

"People want to see better traffic flow and better pedestrian safety," Benjamin said. "We've been very purposeful in finding opportunities to collaborate with the county and state. We're only going to be able to get to these solutions through partnerships."

With Southwick and other small streets seeing increased traffic and speed levels, the traffic and transportation director said it's essential to balance the needs of motorists with those of residents, pedestrians, bicyclists and others.

"You want to make sure you have connectivity and that you're not congesting a primary (road)," Benjamin said. "You want to have respect for the different types of roadway functions. It's something that we want to be proactive about."

Speed humps and other traffic calming measures could be part of the solution, but those are handled on a case by case basis if residents gather enough petition signatures showing support, he said.

"Johns Island has been particularly vocal on how something is built, where it is built and what the impacts are," Zimmerman said. "It's great that folks are weighing in on that."

Salvo, for his part, plans to fight until changes are made to Southwick.

"If they don't want to do anything, I'm still gonna run my mouth about it," he said.