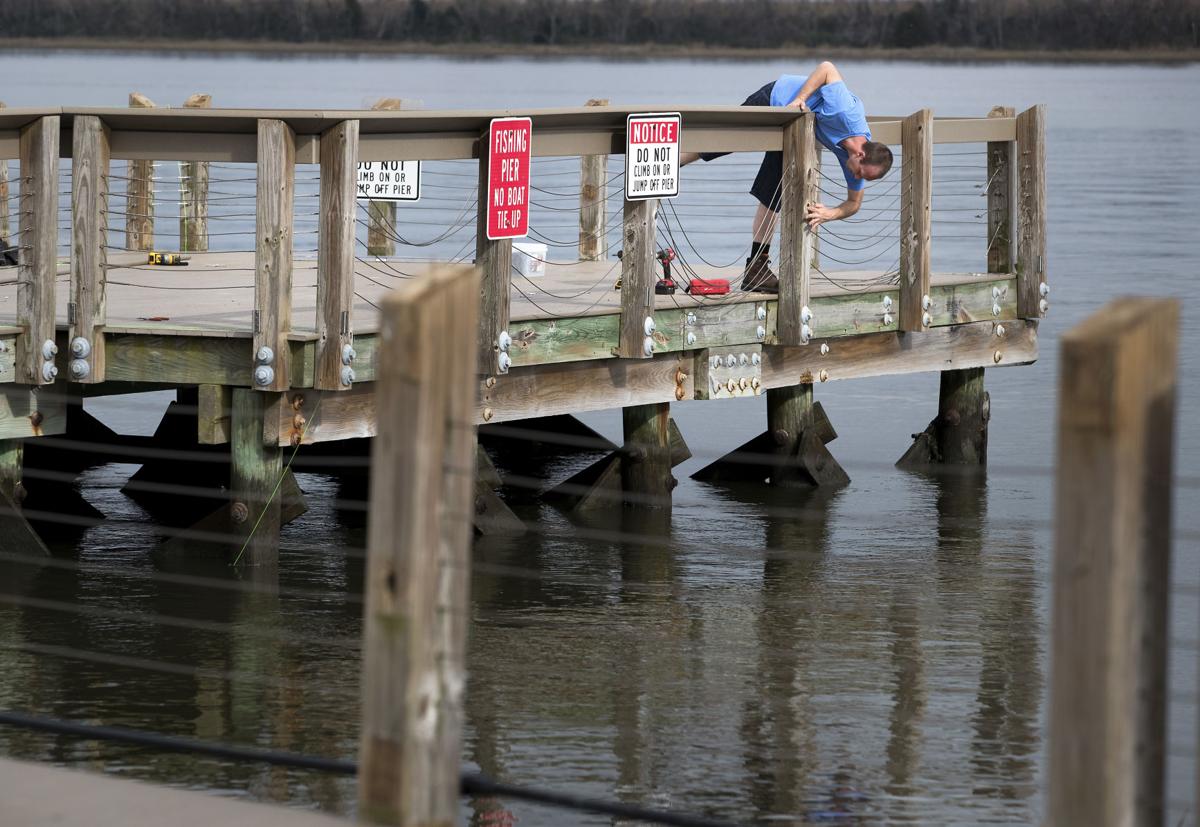 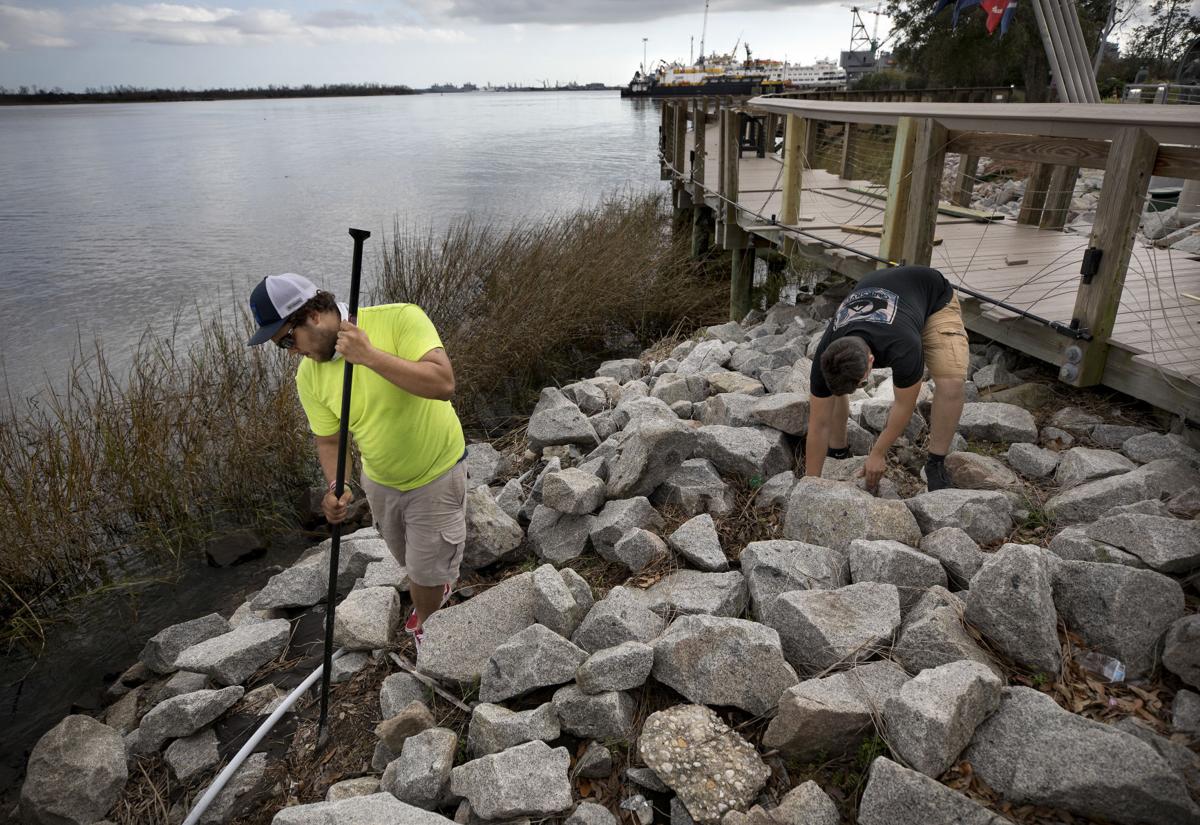 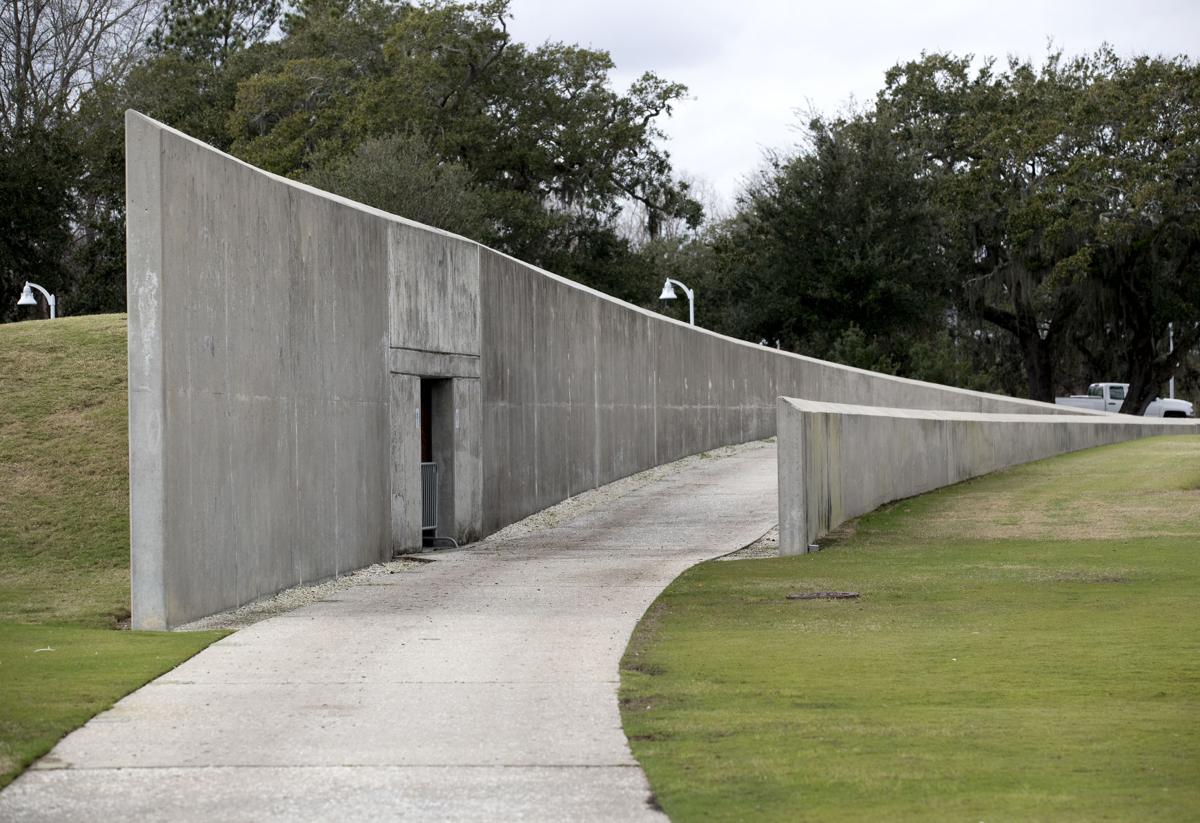 The restrooms are boarded up and closed at Riverfront Park Wednesday, Jan. 15, 2020 in North Charleston. Grace Beahm Alford/Staff

North Charleston is expected to finish more than $1 million in renovations at its Riverfront Park on the old Navy base this spring, just in time for outdoor festivals expected to draw thousands.

The city recently received funding from the Federal Emergency Management Agency to begin repairs in late December on the park's shoreline, which was damaged in Hurricanes Matthew and Irma.

Work also has begun on the boardwalk, which has been closed for years due to storm damages.

North Charleston's Finance Committee will vote Thursday on whether to pay $220,000 to Murrells Inlet-based Associates Roofing Construction to demolish restrooms and a retaining wall on the site. A berm that covers the facilities would be flattened as well, creating more green space for park activities.

Those potential improvements would be done by March, city spokesman Ryan Johnson said.

The work being done on the boardwalk and shoreline is also expected to be complete before the park's slate of outdoor events, such as April's High Water Festival which is anticipated to welcome 10,000 guests for musical performances.

Councilman Ron Brinson said the park's popularity has steadily increased in the past five years.

“We are all excited about the growing success and appreciation for Riverfront Park," Brinson said. "It had a little bit of a slow start. Now, it's one of the most popular outdoor recreation venues in the region."

Efforts to repair the park's bank, which has eroded, involves stabilizing it with giant rocks. That effort is also being done by Associates Roofing and has a price tag of $490,000. That cost is completely funded by FEMA, Johnson said.

Costs to repair and upgrade the wooden boardwalk is being split between the federal government and North Charleston. The city is spending just under $300,000 on the project, while FEMA will dish out $229,000 on the endeavor.

Despite some storm damages, most of the park has remained open over the years until repairs began late December, closing off the park's meadow and fishing pier.

The soon-to-be-demolished restrooms were shuttered nine months ago due to maintenance issues, not hurricane damages. But the city felt that doing all of the improvements at the same made sense, especially considering the historic preservation taking place on the base.

"Since the historic restoration is occurring, we thought it was prudent to go with the improvements at the same time," Johnson said.

Elsewhere, the city has worked to redevelop a number of historic cottages and old Navy buildings on former federal complex. Quarters K, built in 1937 as Charleston Naval Base housing for officer families, was redeveloped into an event venue space for weddings, receptions, business meetings and retreats.

Quarters F, an all-white Victorian-style home built in 1898, was also turned into an event venue.

Quarters A, also known as the Admiral’s House, will soon join the list of newly refurbished cottages and houses on the old Navy base after efforts began more than a year ago to turn the two-story neoclassical building into a bed-and-breakfast.

Located on the former Charleston Naval Base, Riverfront Park has served as a top destination in the region where residents come for various large scale events, including the city's annual Independence Day fireworks display.

The popular High Water Festival is slated for April 18-19 and will feature music by Mavis Staples, Andrew Bird, and Drive-By Truckers.

With big events now taking place at the park, efforts to expand the site across Noisette Creek is currently in the works.

The city already has the money to build its $6 million pedestrian bridge across the creek, which would expand the park to the north. The plan is still in its infancy, but early designs call for a bridge spanning 392 feet and would accommodate pedestrians, cyclists and golf carts.

“It’s nice to be able to offer full advantages to citizens," she said.

North Charleston hopes to swap land to pave the way for more water access on the city's eastern edge, particularly Noisette Creek, part of a larger effort that's been ongoing for years.