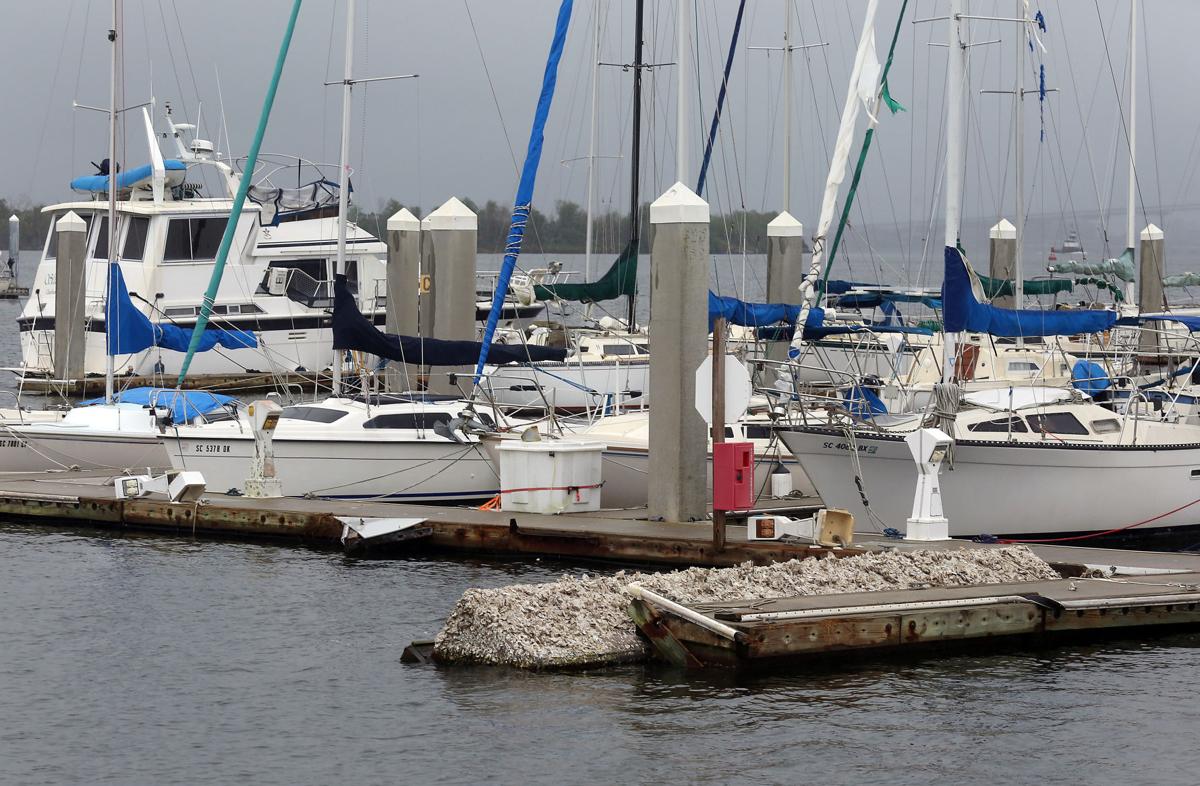 The Cooper River Marina was damaged by Hurricane Dorian, just as Charleston County is figuring out plans for the marina's future with a large new container terminal opening soon next door.

The county parks system owns and operates the 165-slip marina at the southern tip of the former Charleston Naval Base.

Last month, Hurricane Dorian's winds damaged the facility. The county, its engineers and insurance company are still assessing the damage.

Boats tied up there have been able to stay, but most docks now lack power.

"We've done some testing to see what lines are good, what lines are bad," said manager James Fitzgerald. "We'll get a plan together to get that fixed as fast as possible."

Dorian's north-northeast winds jostled the docks, breaking brackets that hold some finger piers together. One pier came off but has been secured, he said. The marina's transient docks as well as its Ships Store are still open.

The Cooper River Marina has been the subject of a planning effort to map out its future, particularly with the opening of a new container port immediately to its north.

North Charleston's Cooper River Marina's future is undecided. Here's how you can weigh in.

The Charleston County Park and Recreation Commission considered closing the marina but instead opted to come up with a new master plan. The most recent plans include converting its 25 acres into a more conventional park, including possible trails, boardwalks, lawn and shelters.

The marina was once part of the Navy base, serving those working and stationed there. Its future has been called into question because of the specter of massive cargo ships that will be arriving and departing the 280-acre Hugh Leatherman shipping terminal being built next door and because it eventually will need millions of dollars in repairs and upgrades.

The county has been weighing whether to continue its operation, close it or lease it to a third party, much like the city of Charleston did with the City Marina on the Ashley River.

In May, the PRC voted to proceed with the first phase of the marina master plan and rebrand the site as Cooper River County Park.

"The damage has not affected our long-term planning at this time," PRC spokeswoman Sarah Reynolds said.

The first phase of the project is expected to cost $1.2 million and includes: dock repairs to extend their life for 5-7 years; reprioritizing a pier for fishing, crabbing and other public use; creating a lawn along the waterfront with picnic areas and shaded seating; new signs; new landscaping throughout park area; relocating boat trailer storage to a less visible site; and stabilizing the eroding shore along Shipyard Creek.

Charleston Parks and Recreation has become a quiet leader in conserving open space along the coast. No other effort, public or private, comes close in terms of the variety of locations and ways the public can enjoy them