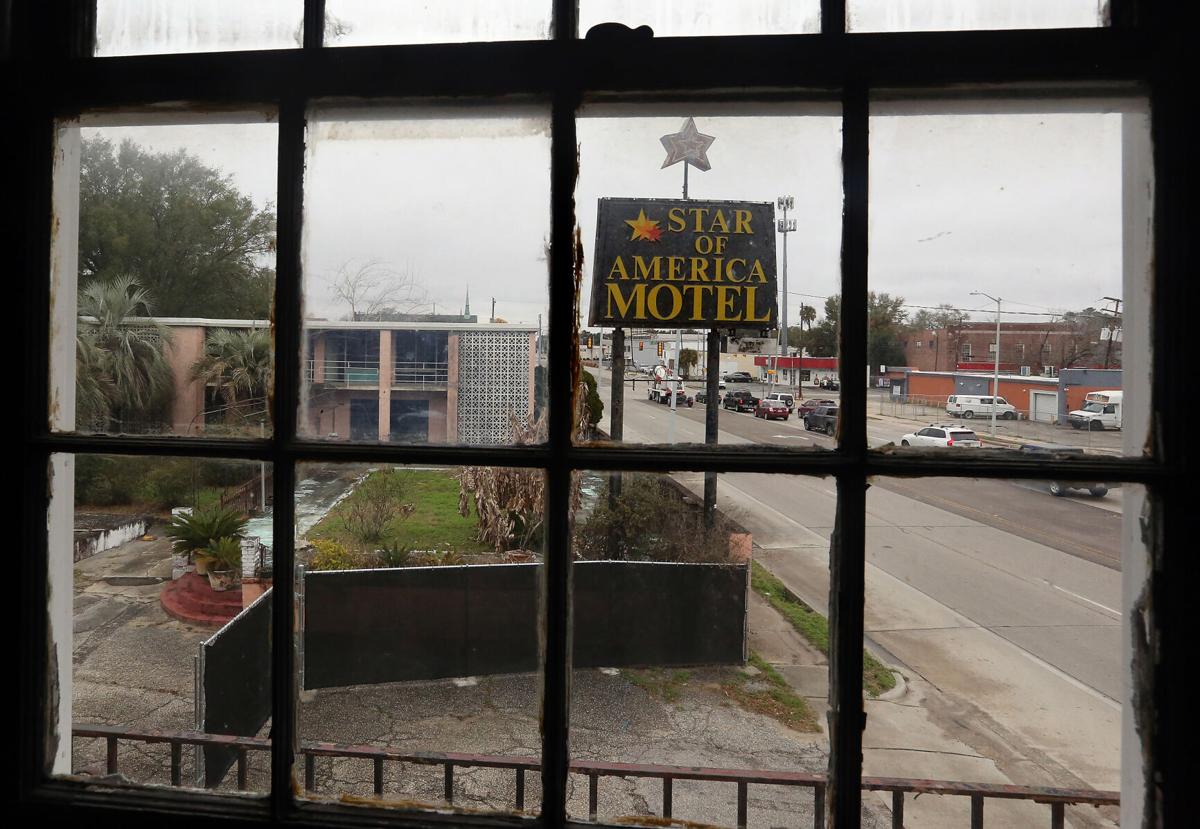 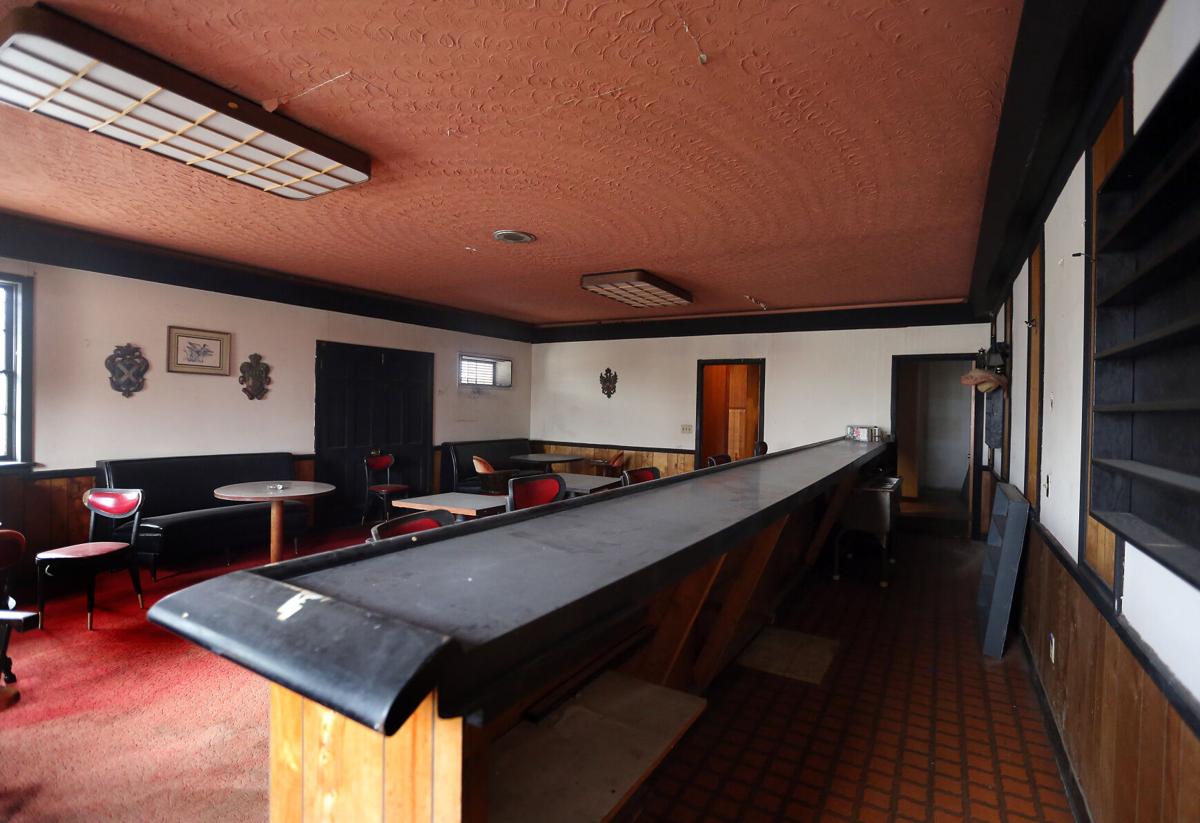 The Star of America Motel has a bar area upstairs. Brad Nettles/Staff 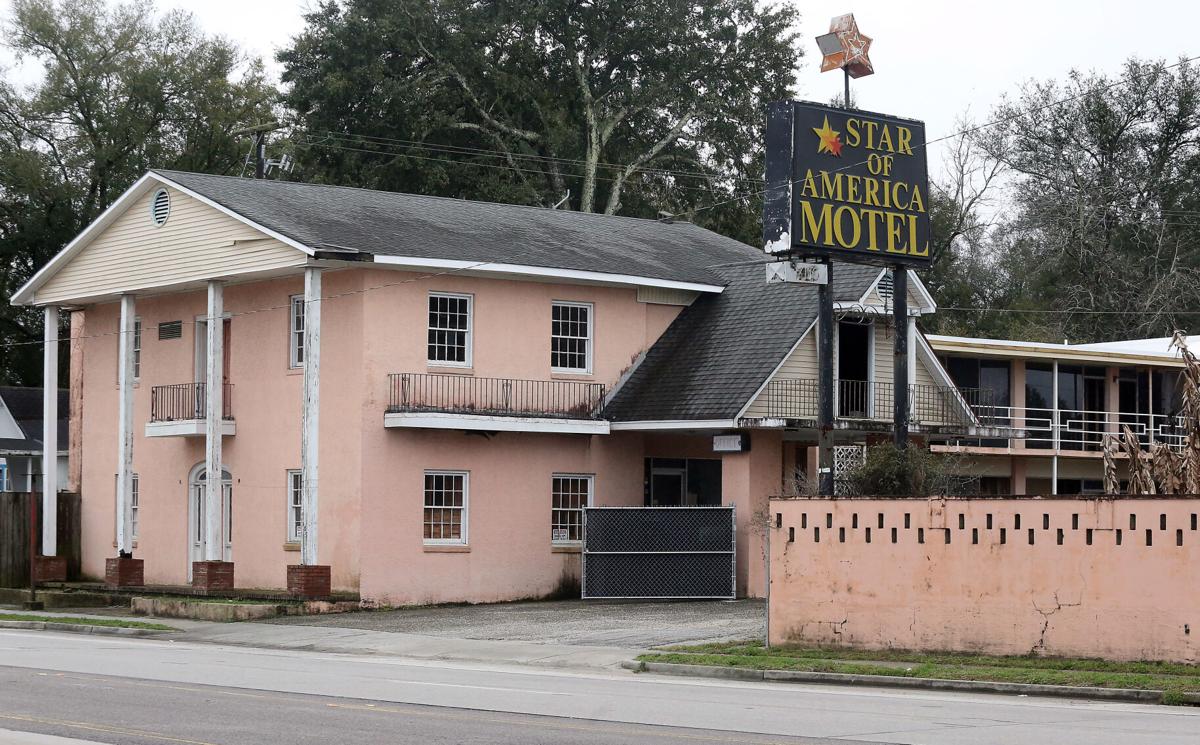 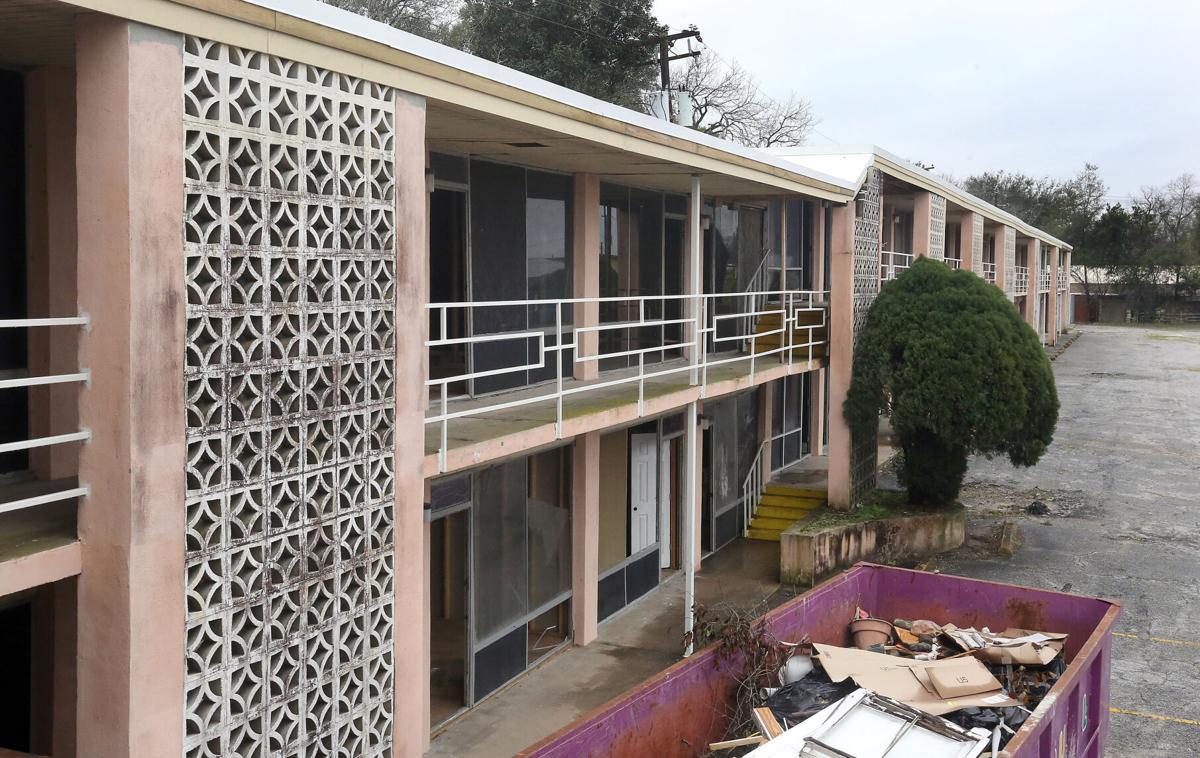 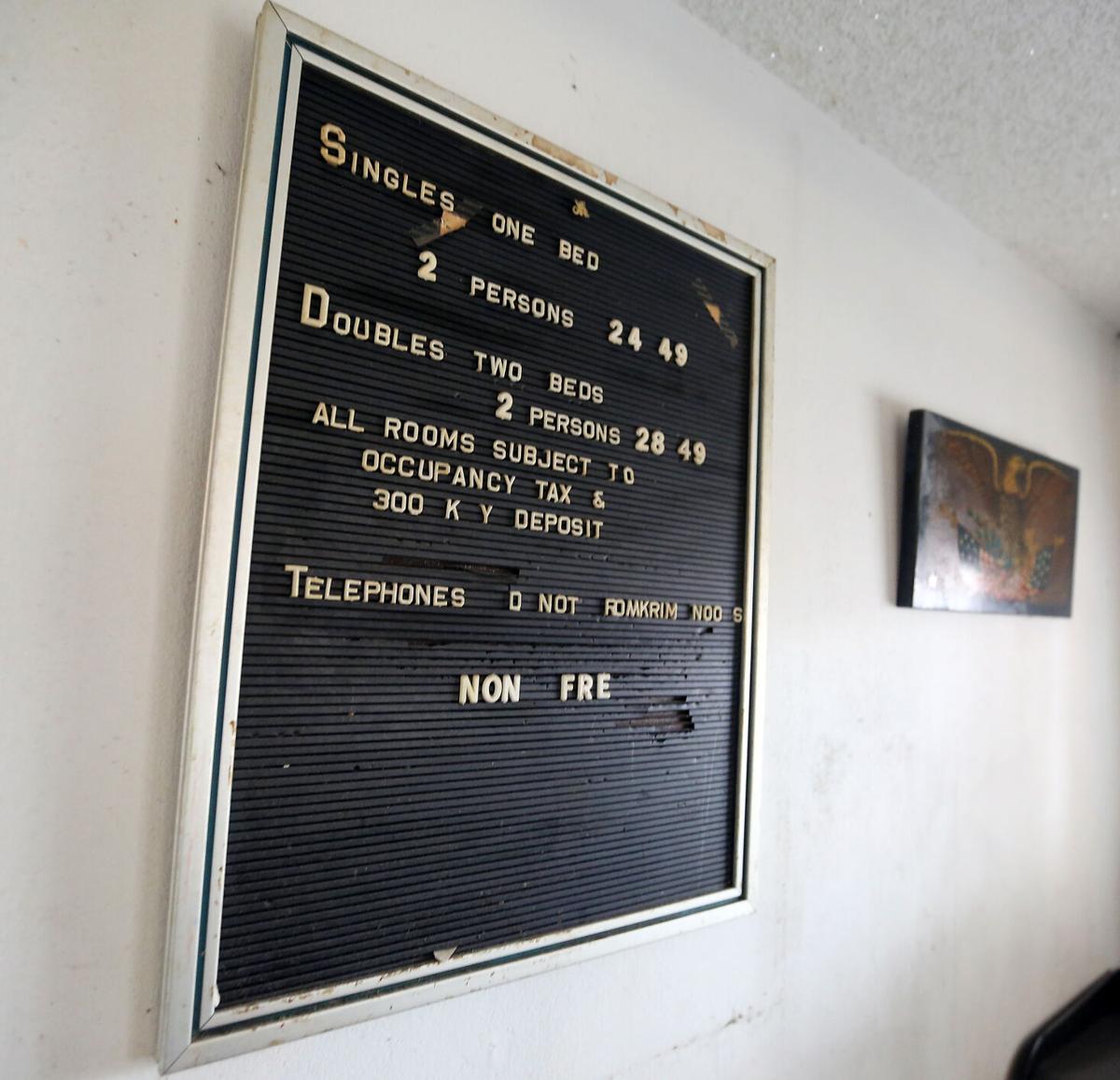 An old price sign hangs in the lobby of the Star of America Motel in North Charleston. Brad Nettles/Staff

The Star of America Motel at 3245 Rivers Ave. has fallen into disrepair over the years. It was in such deterioration that the city condemned the building years ago.

But new light is being shed on the historic value of the structure, previously called the Host of America Motel.

Built in 1961, historians say the lodging space was the first prefabricated motel to come fully furnished in Charleston County, and possibly in the nation.

The Star of America Motel has fallen into disrepair over the years, but new light is being shed on the historic value of the structure.

Working to refurbish the building is property owner Ham Morrison.

"The idea is to restore the motel to its former glory as a motel," he said. “The goal is to have it open sometime next year.”

The structure was recently added to the National Register of Historic Places. Historians say the building is a well-preserved midcentury motel that's a symbol of the area's postwar commercial development.

The building is over 50 years old, meeting the National Register's criteria for historic places. The inclusion of the North Charleston site is part of a larger movement shaping up across the state to preserve midcentury structures as more qualify for designation.

Recent additions to the National Register include similar sites such as the Waikiki Village Motel in Myrtle Beach, built in 1963. The inclusion of more civil rights-era structures is also expected.

The importance of the the two-story, modular motel was documented by reporters when it was built.

In a 1961 News and Courier article, the structure was described as "the first of its kind in the nation,” comprised of stackable, pre-built and fully furnished units made on an assembly line in Thomson, Ga.

Once the individual units were constructed, each was equipped with interior plumbing, electricity, wall-to-wall carpeting, interior décor, televisions, telephones and beds.

"The only thing they really had to do when the boxes and cubes arrived was to connect them all through electricity and plumbing and put in storefront windows," said Brittany V. Lavelle Tulla, lead architectural historian and owner of downtown-based BVL Historic Preservation Research. “It was a way for the property owner to quickly make an investment through his property."

The building came up during a midcentury boom in North Charleston, Lavelle Tulla said.

Rivers Avenue was a commercial strip and served as a gateway into downtown Charleston, she said.

Nearby, Reynolds Avenue had grown to become a hub of local businesses. Lavelle Tulla said the avenue served as a "main street" into the Charleston Naval Base, where workers would outfit submarines with nuclear power and missiles.

With all the activity in the vicinity, it made sense to construct a place for overnight guests, she said.

“It was a great place to build a motel," she said.

Regarding the motel's policies, researchers didn't uncover any formal documents of segregation prior to the 1964 Civil Rights Act. However, it's highly unlikely the facility welcomed Black patrons, as most motels and hotels in the Charleston area were segregated.

What researchers did find were newspaper advertisements that distinguished by race.

In its first year of operation, the Host of America Motel advertised to hire Black staff, such as porters. The motel called for African American maids for the housekeeping staff in 1962. A 1963 ad sought a ”retired White man” for maintenance work.

It is likely the motel didn't begin allowing African American guests until 1970.

"We do know at this time that Charleston is a segregated city," Lavelle Tulla said. "Black citizens couldn't even swim on the beaches."

The motel housed an eating space known as the Pilgrim House Restaurant, which opened in 1966. Upstairs, the Burgundy Lounge was a popular nighttime spot.

The building's original owner sold the site in 1979. Though it continued to function as a motel, it never regained its 1960s-era popularity.

The motel was renamed the Star of America Motel after Hurricane Hugo in 1989.

Vinny Patel's family bought the property in the early '90s. At that time, the facility was still open to guests.

"It was lively," Patel said.

One notable change that occurred to the building in those days was the application of the stucco to the exterior. At some point, the building was painted pink.

The Patels also lived in the facility. Vinny Patel recalls helping manage finances of the family-owned operation. His mother also had a garden containing sugar cane and flowers on the property near the motel pool.

Vinny would help out.

After the Navy base closure in the mid-1990s, business at the motel began to fade. The facility started housing the homeless and low-income individuals.

Over time, the facility deteriorated.

The city forced the motel to close in 2007 due to fire and building code violations, including collapsed ceilings, mold and hazardous utilities. The motel caught fire at least one time since its doors closed in 2007. It reopened briefly before closing down again in 2018.

The building had long caught the attention of Ham Morrison, a developer who oversees Boneworks Property Management. Morrison had refurbished other old properties, such as the one at 1056 King St. in Charleston.

The 1941 structure known as "Big Bertha" has had many uses over years, including a theater, library, grocery store and roller rink. Morrison renovated it in 2017 and it serves as an art gallery and storage space.

The renovation earned Morrison an award in 2019 from the Historic Charleston Foundation, which said it was very impressed with the rehabilitation and adaptive reuse.

Morrison inquired a few years ago to the Patel family about the Star of America site. The two parties eventually agreed to a sale price.

Morrison, who bought the property last year, had already reached out to Lavelle Tulla, who had been looking over newspaper articles and talking with local residents. All of this helped her uncover the building's historical importance, and she was able to convince the city to take the property off of its list of condemned sites in 2019, Lavelle Tulla said.

The motel is mostly intact. The site includes three distinct areas: the main hotel building, which has 22 motel units on each floor and houses a check-in foyer, restaurant and cocktail lounge; an adjacent annex building that contains 10 units; a pool, which has been filled in and is covered with vegetation.

“It literally is a time capsule," Lavelle Tulla said.

Since Lavelle Tulla began researching the property in 2019, work has been done to refurbish the site.

Workers have replaced the roofs on the two buildings and have gotten the structures to the point where interior work can soon begin. Morrison hopes to obtain historical tax credits to help fund the renovation, which he said "won't be cheap."

Morrison said the overall goal is to bring the building back as a lodging space. He said the new structure will have 51 rooms. He is also considering bringing back the restaurant, but that also depends on what the community wants to happen.

"We want to feel out and see what's a good fit for the neighborhood," he said.