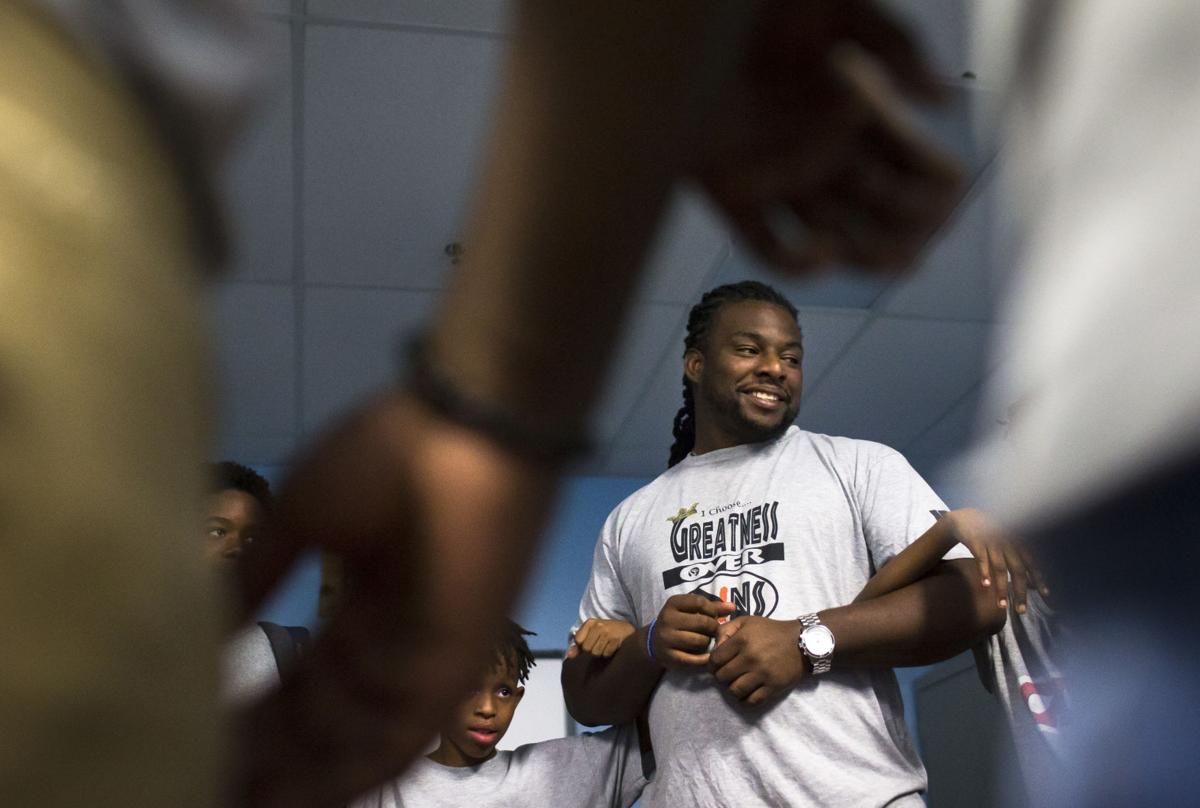 Troy McClain links arms with a group of young men involved in the I AM Foundation after a class on Monday, Aug. 27, 2018, at Christ Temple Church in North Charleston. The group meets with youths from the ages of 6 to 18 and helps them further their academic and life skills. McClain said, "Our goal is to unlock the greatness in them." Andrew J. Whitaker/Staff 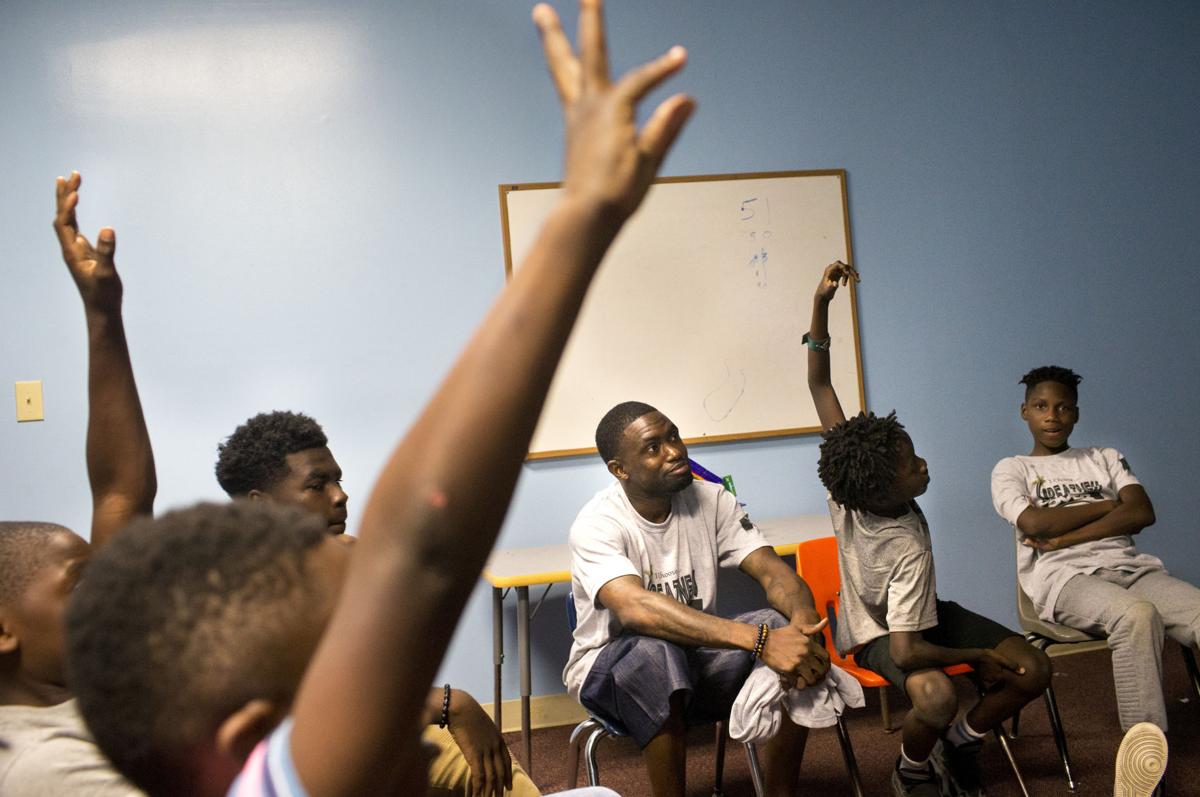 Deon Nowell quizzes teenagers involved in the I AM Foundation on what they had discussed earlier in class on Monday, Aug. 27, 2018, at Christ Temple Church in North Charleston. Andrew J. Whitaker/Staff

Troy McClain links arms with a group of young men involved in the I AM Foundation after a class on Monday, Aug. 27, 2018, at Christ Temple Church in North Charleston. The group meets with youths from the ages of 6 to 18 and helps them further their academic and life skills. McClain said, "Our goal is to unlock the greatness in them." Andrew J. Whitaker/Staff

Deon Nowell quizzes teenagers involved in the I AM Foundation on what they had discussed earlier in class on Monday, Aug. 27, 2018, at Christ Temple Church in North Charleston. Andrew J. Whitaker/Staff

The boys sat in a circle on small, multicolored plastic chairs inside Christ Temple Church in North Charleston, eagerly eyeing a $20 bill on the ground at the center of the room.

They wore shirts that read, "I Choose Greatness Over Guns."

The money was their prize — payoff for answering questions, staying engaged and for learning lessons on how to stay on the right path in life. In recent years, boys like these have been at the center of many homicides, shootings and other violent crimes in the Charleston area. They have been victims or perpetrators.

In one example, two teens died in July after an argument near a West Ashley basketball court turned into a shootout, spurring the Ashley Oaks community into action. A 17-year-old suspect was arrested.

For youth advocates such as Deon Nowell, intervening early with life lessons and providing positive, strong role models are key.

Nowell works as a mentor with the I AM Foundation, a nonprofit that gives academic and life assistance to young men of color in the Charleston area. On a recent evening in late August, Nowell was working hard to do just that.

The $20 went to a boy who tried to answer every question posed to the group.

"Those are your goals," Nowell told the boys. "That's how you should be eager in your education."

For Nowell, mentoring young men is a chance to provide the community with something he never had growing up: stability.

When he was 22, he went to federal prison on drug and weapons charges. He was looking at a 25-year sentence but had it commuted by then-President Barack Obama on the last day of his presidency.

While in prison, Nowell said he was mentored and started to mentor other inmates. He decided he wanted to do similar work when he was released from custody.

Shortly after his release, Nowell ran into someone he knew growing up, Troy McClain, the founder of the I AM Foundation, which stands for the "Instilling Ambitious Men."

At first, McClain was skeptical. He knew Nowell's past, but after about a year, the former inmate showed that he was on the right path. McClain invited him to become a mentor for the nonprofit.

"I actually try to give them what was absent from my life," Nowell said. "I look at my life and the course it could have taken had I had a mentor, had I had someone who was honest with me and actually showed me my choices and their consequences."

Founded in 2013, the I AM Foundation became a nonprofit in 2016 and serves about 30 young men of color between the ages of 6 and 18. It provides mentorship, academic help and career guidance. Mentors work to develop close relationships with the boys' parents, teachers, coaches and other adults in their lives in order to help guide them on their way to adulthood.

"I was fortunate enough to have both of my parents," McClain said. "My dad was a very strong disciplinarian. He instilled in us core values, principles and all the stuff that you would need to know as a child. ... Even with having them home, I struggled a lot in school."

Despite the challenges, he finished high school and earned his college degree last year.

By the time the young men finish the program, McClain and his associates hope to motivate them to pursue college studies, learn a trade, go into business for themselves or pursue other life goals.

And despite its brief existence, the group already has a success story: Darryl Markell Capleton.

Capleton, who is the son of one of the nonprofit's mentors, graduated this summer and is in his freshman year at Clemson University, where he received a full academic scholarship and is studying engineering.

The teen's father, Darryl Capleton, said he hopes that young men like his son will serve as a bridge to the next generation.

"I'm 36 years old, and when I'm talking to a 12-year-old, sometimes they think I was born in 1922," Darryl Capleton said. "My son, he never got in trouble, but he saw trouble. He was able to avoid it. ... He said to me, 'Dad, you know I wasn't exposed to a lot of the stuff at an early age. I didn't get exposed to a lot of the violence and stuff like that and guns and drugs until I was in seventh or eighth grade, and by then, I already had my direction."

The elder Capleton also has his own nonprofit, the Concrete Rose Foundation, which operates arm in arm with the I AM Foundation but focuses on sports.

As mentors like the elder Capleton, Nowell and McClain work to shape the lives of young men in the community. And the young men say the efforts are already paying off.

Jameer Watson, a junior at Cane Bay High School near Summerville, serves as a mentor to the younger boys in the group.

He has also played on sports teams coached by Capleton since he was 6 years old.

"When I was getting mentored, they helped me out a lot, and they passed down their (knowledge) to me to help out the younger kids," Watson said. "They showed me how to be a young man, how to be respectful and have good manners."

And for Trevon Goss, a sixth-grader at River Oaks Middle School in North Charleston, the support has helped him turn his life around.