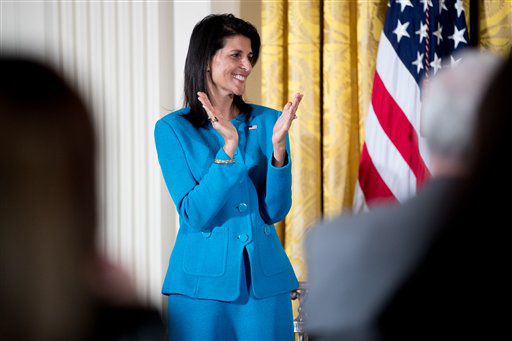 U.S. Ambassador to the UN Nikki Haley appears at a women's empowerment panel in the East Room of the White House, Wednesday, March 29, 2017, in Washington. (AP Photo/Andrew Harnik) 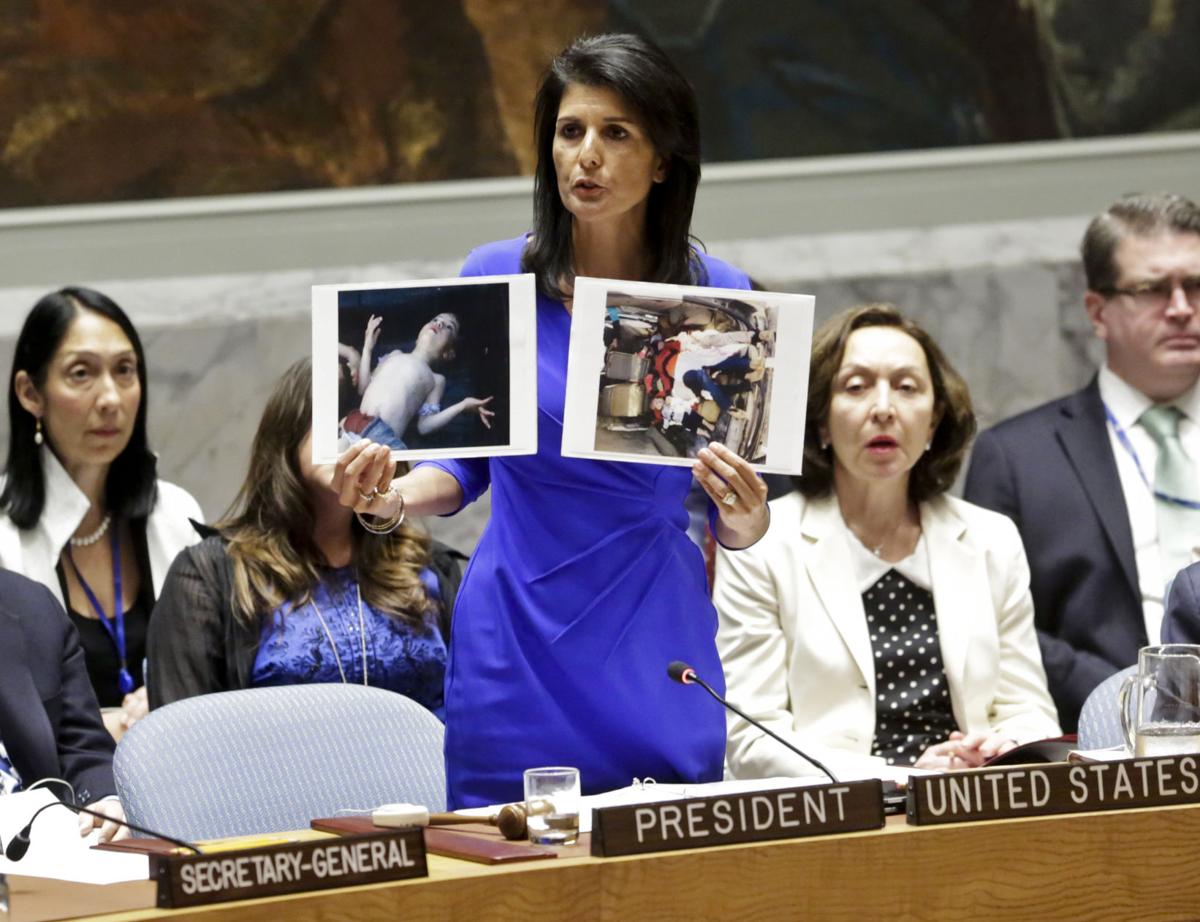 Nikki Haley, the U.S. ambassador to the United Nations, shows pictures of Syrian victims of chemical attacks as she addresses a meeting of the Security Council on Syria at U.N. headquarters, Wednesday, April 5, 2017. Bebeto Matthews/AP

U.S. Ambassador to the UN Nikki Haley appears at a women's empowerment panel in the East Room of the White House, Wednesday, March 29, 2017, in Washington. (AP Photo/Andrew Harnik)

Nikki Haley, the U.S. ambassador to the United Nations, shows pictures of Syrian victims of chemical attacks as she addresses a meeting of the Security Council on Syria at U.N. headquarters, Wednesday, April 5, 2017. Bebeto Matthews/AP

WASHINGTON – Nikki Haley’s legacy as governor of South Carolina was built in the aftermath of the Emanuel AME Church shooting when the path to heal a reeling state meant taking down the divisive Confederate flag from the Statehouse grounds.

Just shy of two years later and less than three months into her tenure as U.S. ambassador to the United Nations, Haley might have already had the second defining moment of her political career.

She called for the council to take action against Assad, and delivered some of the harshest criticism yet of Russia for its continued alliance with Syria. At one point, Haley stood up, holding in each hand a different enlarged photograph of young Syrian children dead or dying from Sarin gas.

“We awoke to pictures, to children foaming at the mouth, suffering convulsions, being carried in the arms of desperate parents,” said Haley. “We saw rows of lifeless bodies, some still in diapers. Some with the visible scars of a chemical weapons attack.

Politicians, pundits and the public have lauded her for speaking truth to power, rising above the political fray and most of all, articulating a moral imperative that had yet to be expressed by any of her superiors.

It’s no secret Haley harbors higher political ambitions. To the extent she can keep acting on the same political instincts that have made her successful in the past, she could be well positioned to take her next leap.

Early indications suggest she is already getting ready.

David Bosco, a professor at the Indiana University-Bloomington School of Global and International Studies and considered a foremost expert on the United Nations, said there are multiple models for U.S. ambassador to the U.N.: ones who work behind the scenes and others who enjoy the spotlight.

“My sense so far is that (Haley) is going to end up being one of the more visible U.N. ambassadors that we’ve had,” Bosco said. “I’ve been struck by her level of confidence and her willingness to have a high public profile. She’s done a lot of media interviews, she gave a big speech at the Council on Foreign Relations … I thought she would maybe take a longer period to understand the place and get up to speed. But she does seem to have gotten up to speed fairly quickly.”

So far, Haley has benefited from working under a secretary of state who largely eschews public appearances, allowing her to be the face of U.S. foreign policy.

But perhaps the clearest sign of how she’s approaching her job from a political perspective is the appointment of longtime pollster and strategist Jon Lerner as deputy in charge of the ambassador’s Washington, D.C., office.

Officially, Lerner’s job is to represent Haley at high-level meetings in Washington while she’s at U.N. headquarters in New York. More generally he is Haley’s eyes and ears in the corridors of power, someone who can fill her in on the people and the players, share intelligence and offer insight. Lerner is also most certainly continuing to advise Haley on how best to advance.

“If she’s going to be an independent player who can impact policy, she is going to need to be well versed in that,” said Bosco, who added it’s not uncommon for someone with a political background to run the U.N. ambassador’s Washington operation.

The very same day Haley gave her noted Syria speech at the U.N., she was booed at the New York Times' "Women of the World" summit for her association with the Trump administration.

At one point while Haley was interviewed live on stage by journalist Greta Van Susteren, she was interrupted mid-sentence by an audience member asking about Trump's ban on Syrian refugees from the United States. Rather than responding, Haley stopped, smiled, ignored the question and the interview continued.

That video has gone viral, too.

Haley wants her words to lead to actions, and she says that has already happened. At the “Women in the World” summit, she said it was at her urging that a U.N. report comparing Israel to Apartheid-era South Africa was withdrawn, its author forced to resign. After her impassioned speech on Syria, she said, the Russian ambassador agreed to come to the table for talks.

By the week’s end, Trump had launched isolated airstrikes in Syria, and Haley sought to position herself as a player in that decision.

“As I warned … when the international community consistently fails in its duties to act collectively, there are times when states are compelled to take their own action,” Haley told the U.N. Security Council on Friday.

South Carolina Republican U.S. Sen. Lindsey Graham, who supports a U.S. military response in Syria, said Haley “represents us well” at the U.N. But he downplayed what role Haley might have had in the administration's response.

It's true that Haley doesn't get to make the call on military action, though her recent promotion to membership of the president's National Security Council could give her more influence in these conversations.

Still, as Haley ostensibly uses her new portfolio to leverage herself, she could find there may be nothing wrong with being known as the commanding voice of U.S. foreign policy — especially in an administration where the president chooses to communicate with the public through Twitter and the secretary of state chooses not to speak to the public much at all.

Haley might already be recognizing her power. At the women's summit she described a text message she received from a fellow ambassador, which she said read "'Thank you for what you said today. It's so good to see America lead.'

"And that's what we're trying to do."