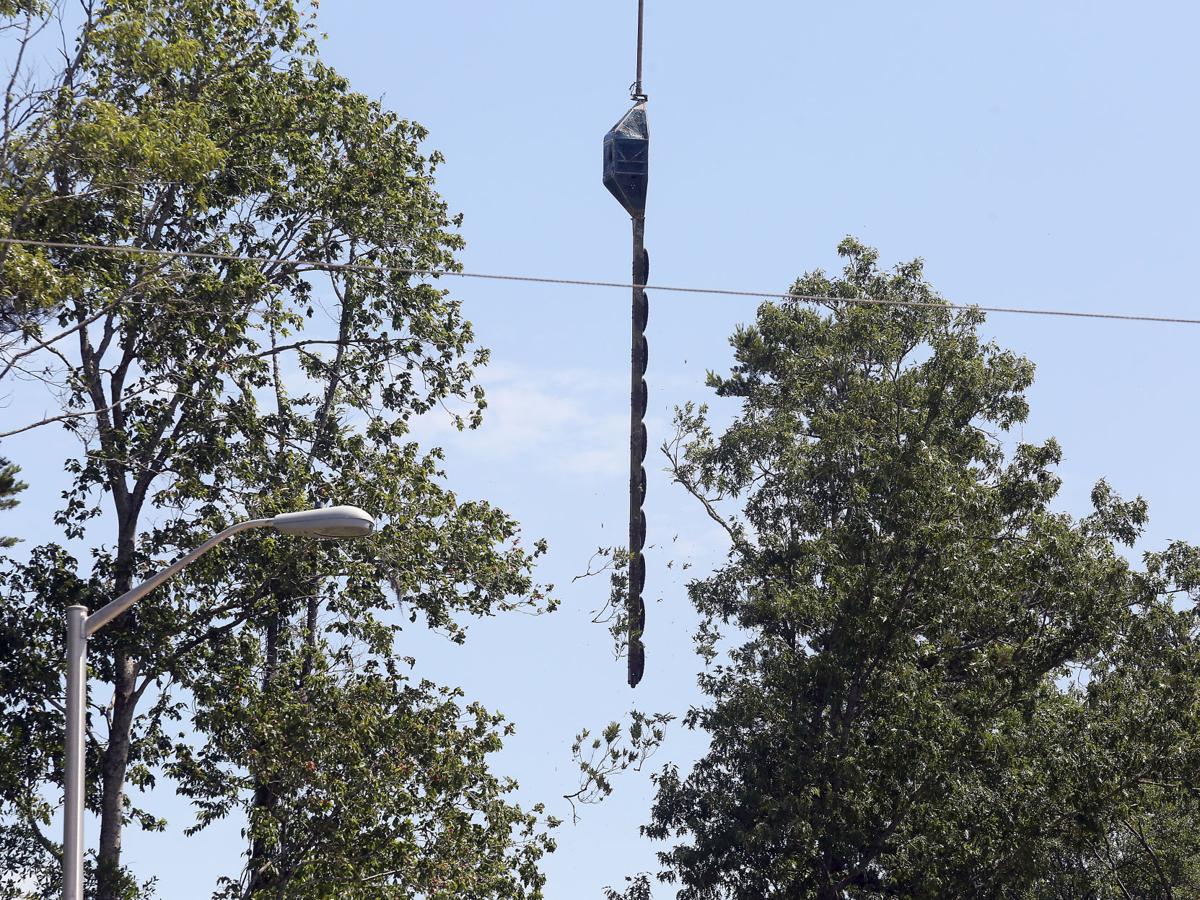 Officers from the Charleston Police Department blocked Bees Ferry Road between Main Road and Bluewater Way on Wednesday, May 13, 2020, so a helicopter contractor for Dominion Energy could trim trees away from power lines in a swamp area off the road. Brad Nettles/Staff 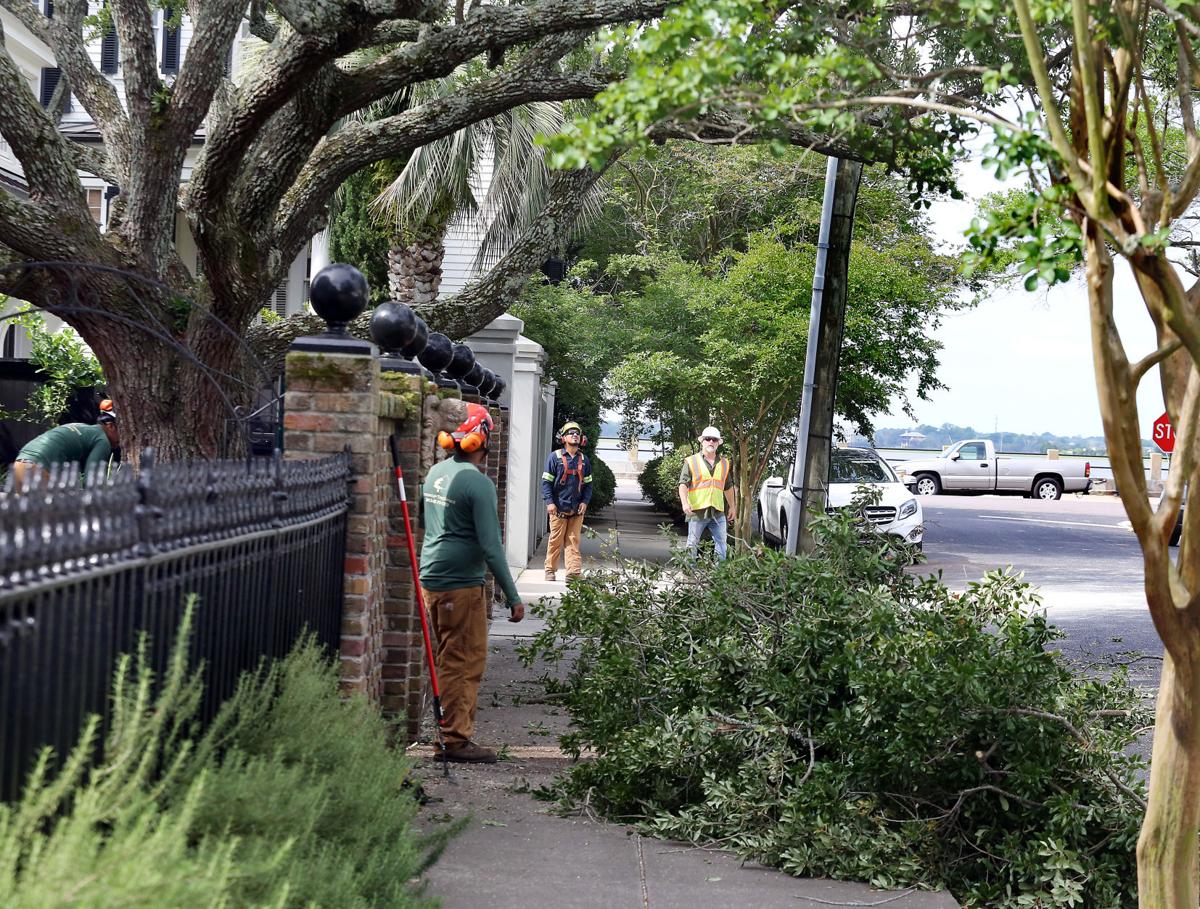 City of Charleston urban forester David Grant (right) checks the tree trimming of workers from Winthrop Tree Services on Wednesday morning, May 6, 2020. South Battery resident Mary Halpin hired Winthrop to trim an oak tree in her yard away from power lines before Dominion Energy tree contractors could. Grant made sure that the workers from the tree service did it safely. File/Brad Nettles/ Staff

Stopping the electric company from "butchering" trees each spring might be as tangled a process as the canopy of green that residents want to protect.

A new group called "Stop Dominion" has emerged in downtown Charleston because residents want a tighter circumference of cleared tree limbs around wires. The group filed a petition with City Council calling for leaders to tear up a nearly year-old contract with the power company, claiming there's proof Dominion Energy violated it.

But city leaders say their hands are tied.

Without the agreement, Dominion could make deeper cuts than they do now.

"Long story short — local governments can't really do anything," McQueeney said. "We've gotten them to voluntarily comply with us. ... As a practical matter, our hands are tied and the appropriate vehicle would be the Public Service Commission."

But one of the new group's founders, Phil Noble, said residents are being presented with a false choice of "butchering" trees or having electricity. Noble and members of his group think the city can and should weigh in.

Billy Want, an environmental attorney in the Charleston area, represents the group. Want has a noted background, having worked for the Justice Department, going after big-time polluters in Alaska and Puerto Rico. He is one of the founding board members of the Environmental Law Center and the Coastal Conservation League.

"We think that our group has already been able to marshal a lot of the information to show that Dominion Energy is not giving us a quality cutting service of our trees," Want said in a recent news conference. "We hope (Dominion) will voluntarily, temporarily stop cutting due to complaints and establish a better cutting policy."

Dominion spokesman Paul Fischer said that while the company's tree-trimming might not be popular, it's critical to provide electricity to customers. Crews trim trees in the same area every five years, this year on the peninsula.

"Trees and tree limbs remain the No. 1 reason for power outages," Fisher said. "Safeguarding energized lines from overgrown vegetation is an integral part to providing safe and reliable power to all the customers we serve."

Mayor John Tecklenburg said it's a tough balancing act, and planning for the future is the best approach. He said that before the coronavirus pandemic halted gatherings and some city business, a committee was set up to explore putting utility wires underground, either neighborhood by neighborhood or street by street.

If a neighborhood or street wants underground electric wires, Dominion will pay for half the project's cost, the city will pay 35 percent and the street owners or neighborhood would shoulder 15 percent of the cost.

Part of the Country Club II neighborhood on James Island, bordered by Burning Tree Road, Cheves Drive and Fairway Drive, will have wires buried underground, providing electricity to 95 homes there. Work there was put on hold because of COVID-19, but should be starting up again soon. The cost is about $775,000, with the city expected to pay about $135,000 and the neighborhood paying about $58,000.

He also said the city is proactive in replanting trees under power lines that aren't grand oaks, but instead crepe myrtles.

But when tree-cutting trucks make their way down Charleston streets, phones start ringing. Since Dominion's work is concentrated downtown this year, that means Councilman Mike Seekings is fielding calls and emails.

He said Dominion's communication is "lacking."

"Count me in for wanting responsible tree trimming," Seekings said.

The long-term goal, he said, should be burying power lines underground.

In his 11 years on City Council, he's received the most questions and complaints about tree trimming. Concerns about flooding downtown are "not even close" to the number of emails, phone calls and text messages he receives from constituents on tree trimming.

"The general view from citizens is the work they are doing is excessive," he said.

He thinks the city should review the tree-trimming contract and make sure it is appropriate. If not, rewrite it.

Editorial: To end controversial Charleston tree trimming, get at the problem's root

Right now, the city has an agreement with Dominion about how many feet of tree limbs around the wires can be cleared. The standards in Charleston are stricter than the power company's policy statewide, city staffers have said.

While he can't be everywhere the tree-trimming crews are, city arborist David Grant knows when crews are expected.

Grant said he meets with Dominion employees throughout the year and gets maps of the areas they're looking to trim. He's worked with the power company since the city issued a stop-work order for tree trimming in the Riverland Terrace neighborhood on James Island last spring.

What that stop-work order brought to light was an expired contract between the city and South Carolina Electric & Gas, now run by Dominion, according to Parks Director Jason Kronsberg. He said SCE&G was more lenient on the tree limbs compared with how Dominion conducts its trimming.

"I think they are taking a much stricter approach than they did in the past," Kronsberg said. "That is why the general public, as well as city staff, is seeing some tree pruning that may be a little different than in the past 15 years or so."

Dominion has said it has arborists on staff, too, and all eight are certified commercial pesticide applicators and have bachelor's degrees in forest resource management and certifications from the International Society of Arboriculture.

Senn proposed a bill requiring stricter certification — a bill that will die this session because the coronavirus pandemic has essentially halted proposed legislation. She described Dominion's approach as a four-hour training course, deeming the person an arborist and handing them a chainsaw. She called it an insult to those with years of forestry schooling.

Senn got involved in Dominion's work when tree trimming was slated for the Riverland Terrace neighborhood, which in in the district she represents.

While she understands the frustration and anger residents may feel when they see tree-cutting crews around town, she said there's not much the group can do.

"I can understand why they feel that way, there are many other people who feel that way with them," Senn said. "Unfortunately, it is state law that is on (Dominion's) side and they'll hit a brick wall every time."

The added complexity is willingness of senators outside of the Charleston area, she said.

"There are far more rural senators than there are urban," Senn said. "There's only 11 urban senators. They want to keep prices as cheap as they can, and cutting trees is expensive."

Still, Want and Noble think the city has power to shape tree-trimming requirements, and should look to New York City, where Con Edison must limit cutting to 10 feet above and 6 feet below and to the sides; and Connecticut, where there's an agreement with United Illuminating to an 8-foot barrier around wires.