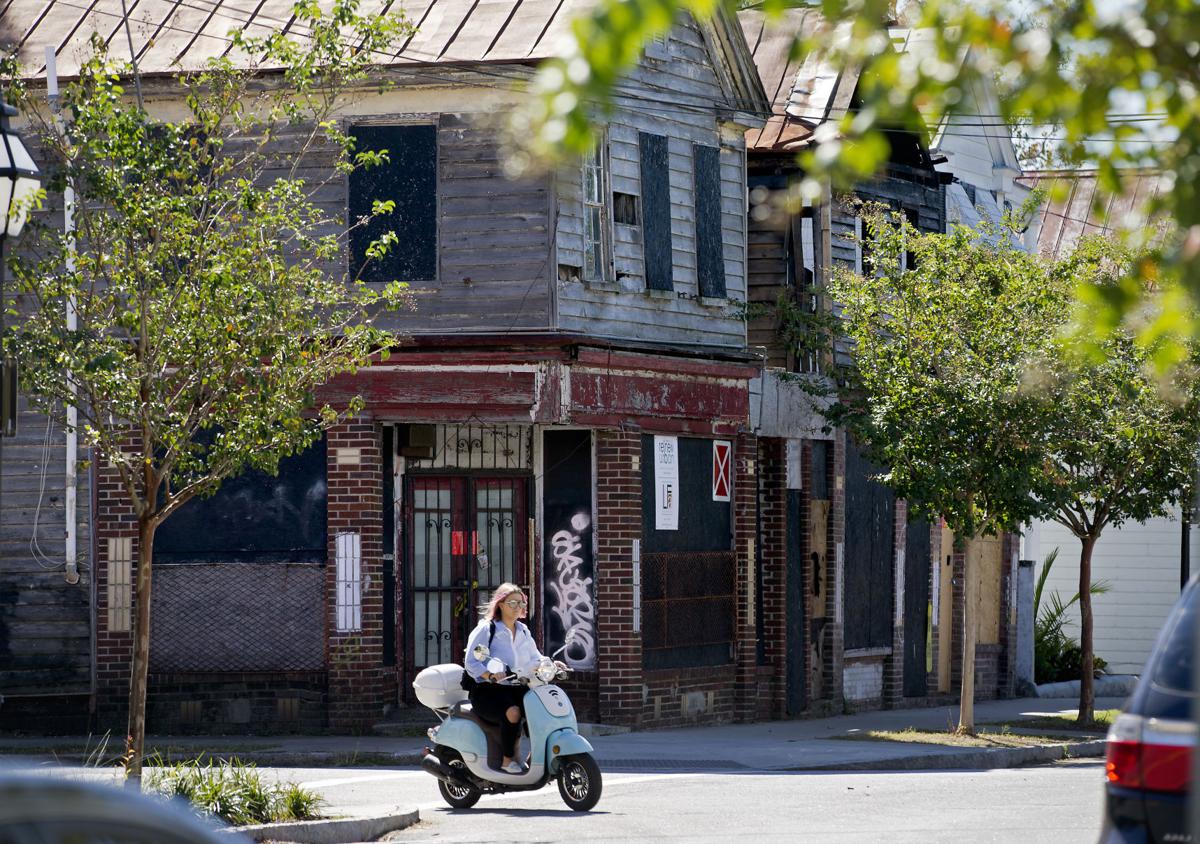 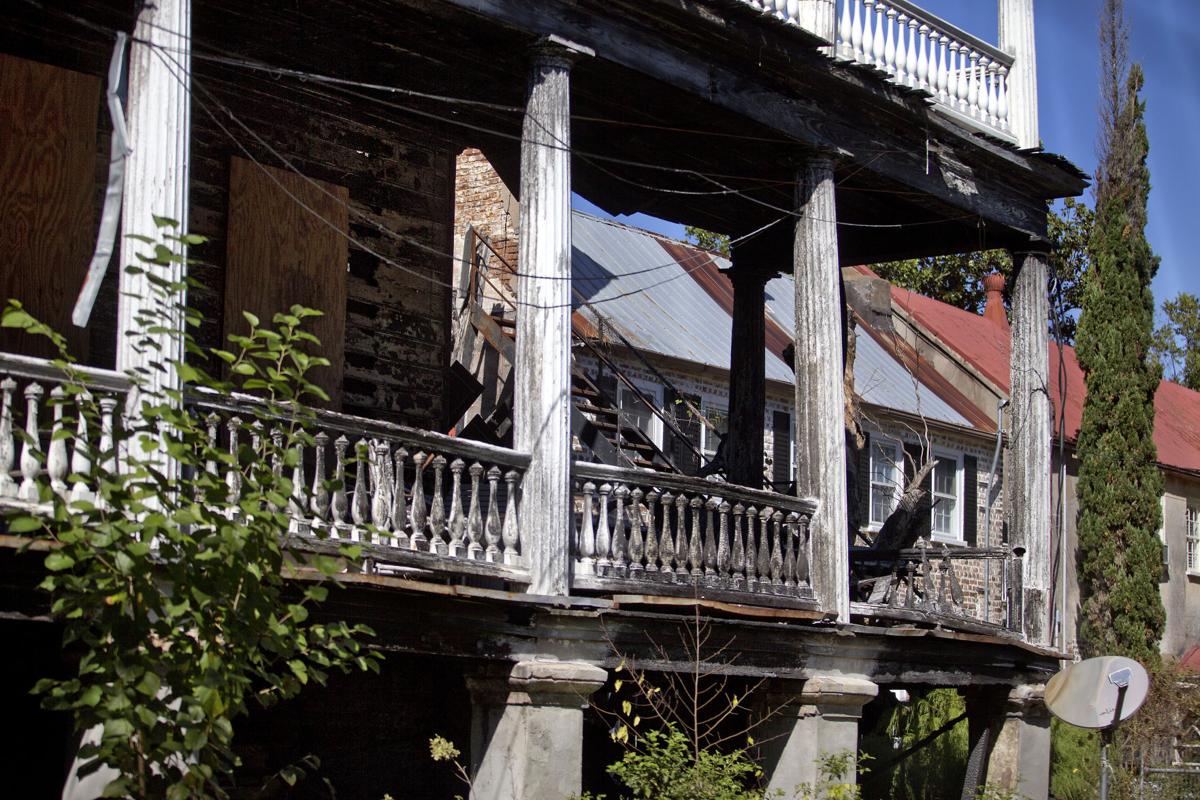 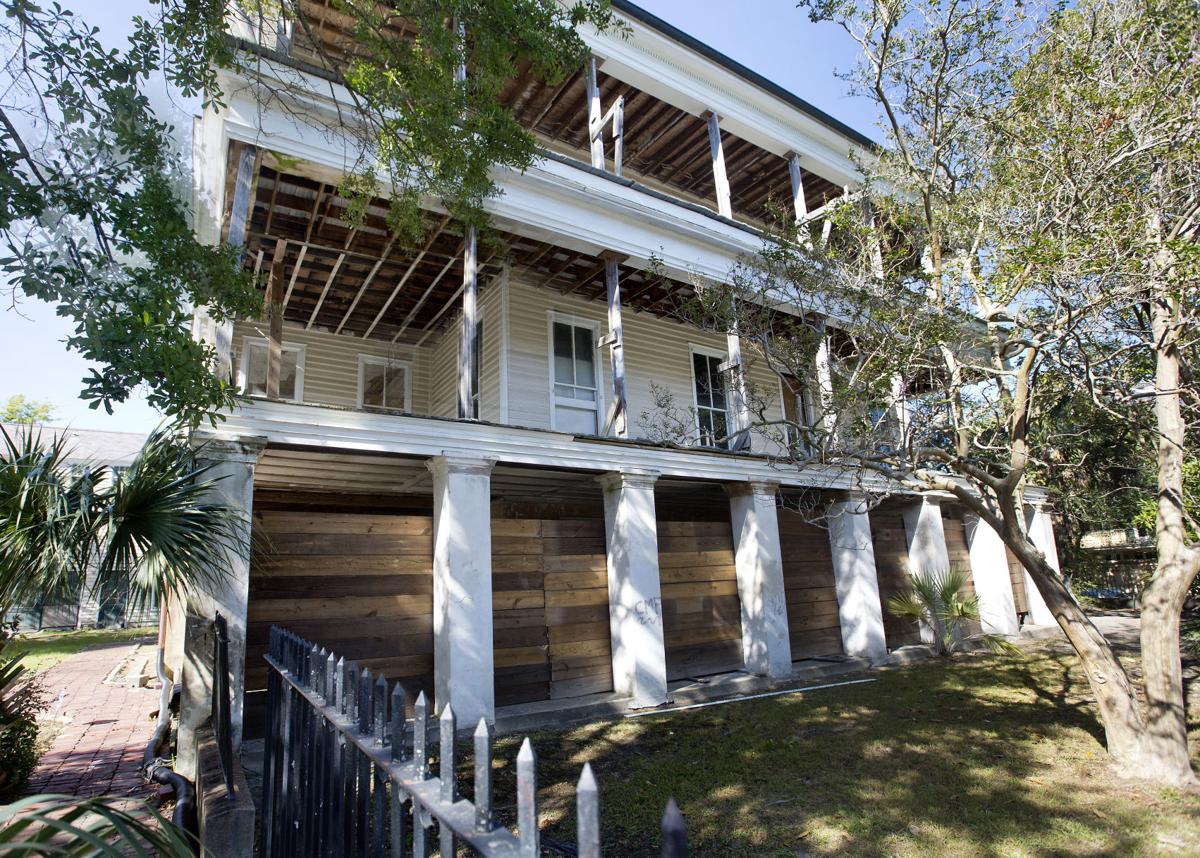 The property at the corner of Gadsden and Montagu Friday, Oct. 11, 2019 in Charleston. Grace Beahm Alford/Staff 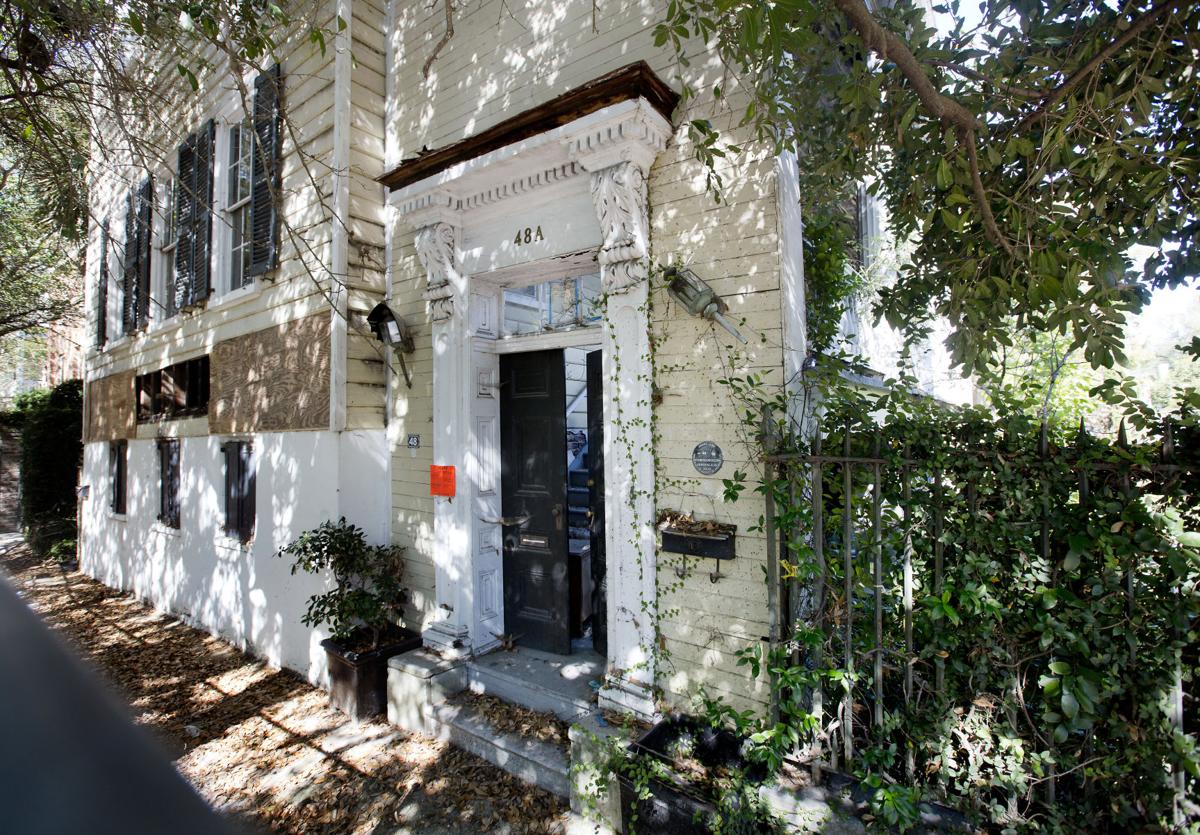 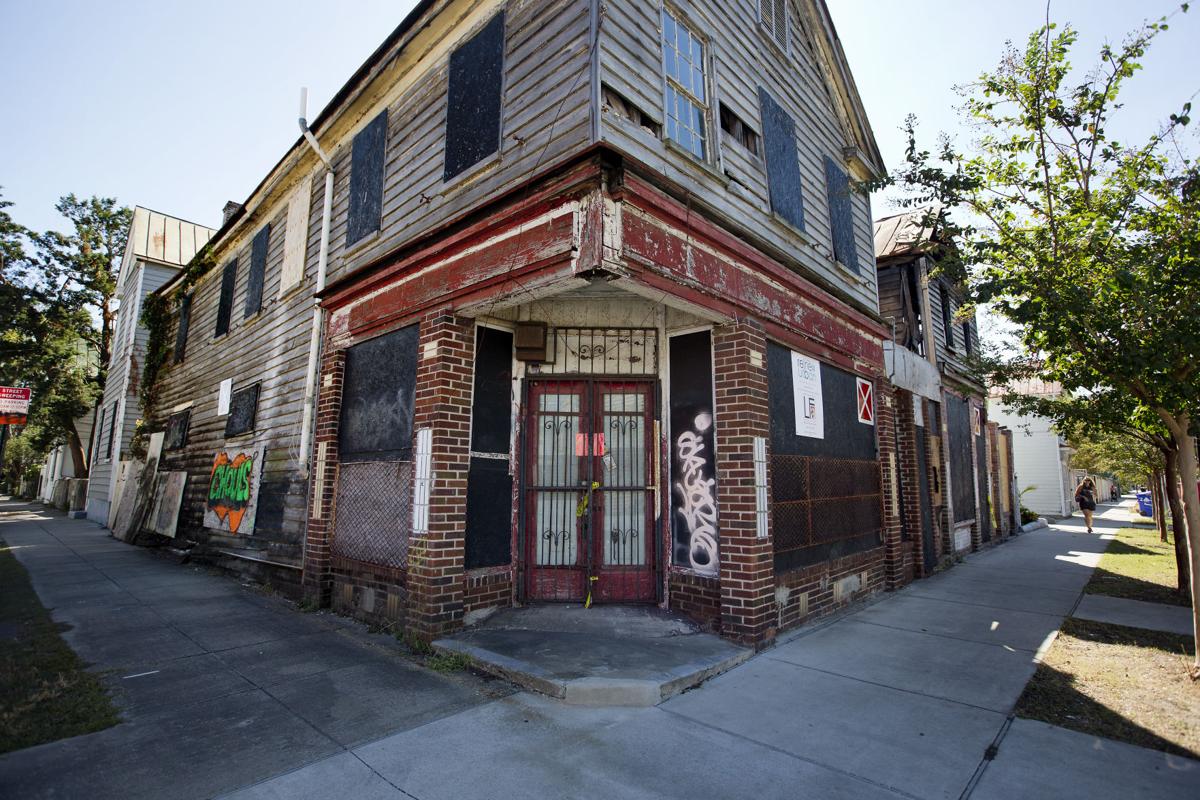 Julie O'Connor had passed by the sadly neglected single house at 98 Cannon St. enough times that she felt she had to try to do something about it.

So O'Connor started a new nonprofit, Save Our Structures Charleston (or just "SOS CHS"), undertook an ambitious survey of most buildings on peninsular Charleston, and recorded a detailed exterior description of each.

So far, the survey found 180 different buildings at risk of being lost by neglect, from tiny houses on dead-end streets to mansions in long-gentrified neighborhoods.

Charleston has a national reputation for historic preservation, but the city has long struggled with property owners unable or unwilling to repair their old buildings, the gradual decay of which erodes the city's beauty, livability and history. Most agree great strides have been made in recent years because of the city's current popularity and prosperity, but that reality also means there's less excuse for the lingering blight.

Before she started the nonprofit, O'Connor walked the walk, taking a small, long-abandoned and crumbling building on Sheppard Street and renovating it as office space for her design company, American Vernacular.

"We're the oldest historic district in the country, and we still have this issue here," O'Connor said. "It's kind of ridiculous." 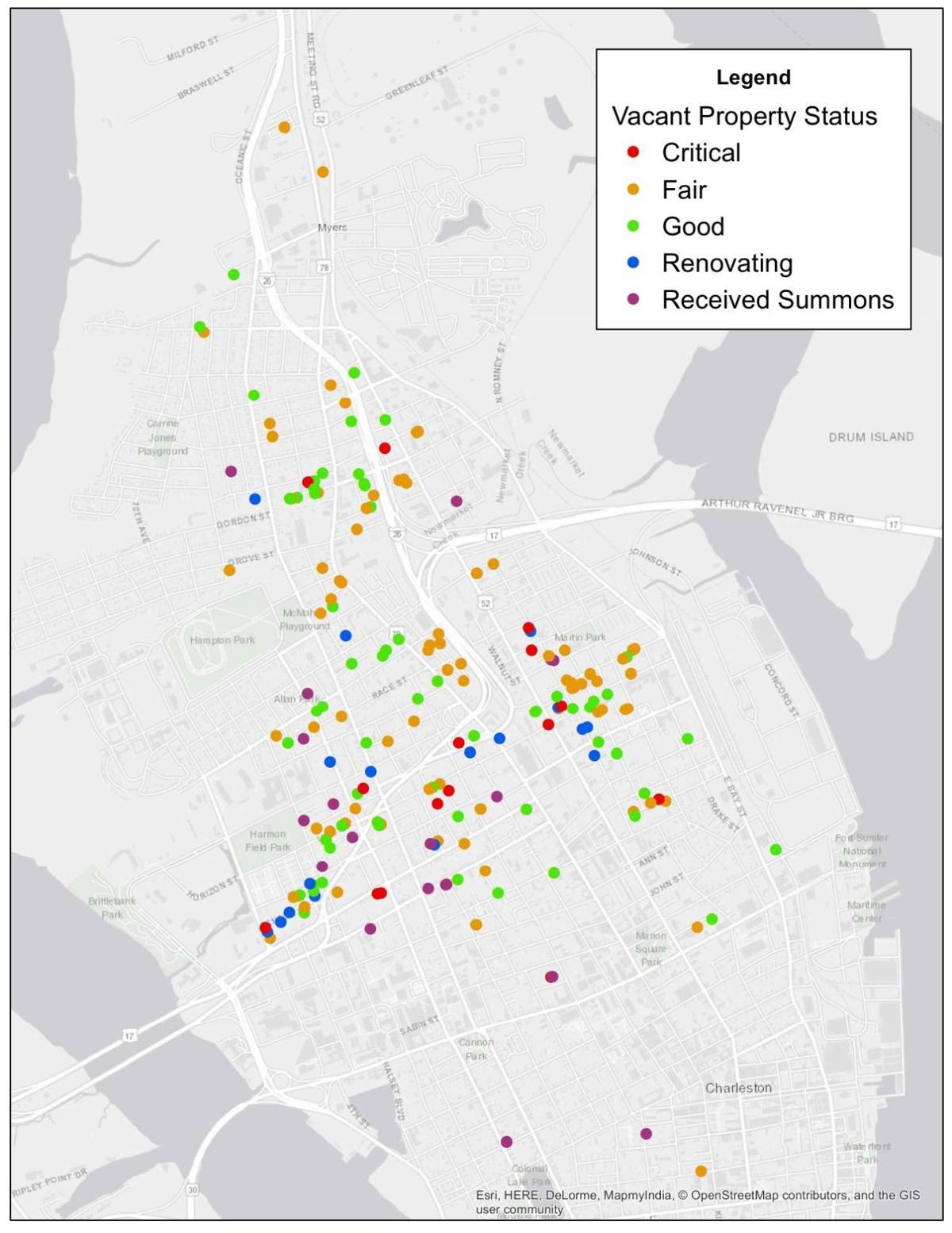 Lt. Dan Riccio, the city’s director of livability, said he has seen more renovation work steadily during his 10 years on the job. In 2014, the city had almost 350 homes and other structures listed at risk for “demolition by neglect,” a lack of maintenance that threatens their survival.

"We're down to a little over 200 now," he said. "We've accomplished quite a bit through enforcement, as well as people coming in, buying properties and renovating them."

But the number of them deemed "critical," most in danger of being lost, has remained roughly the same, at about 15.

But not everything. The city recently lost a grand antebellum home at 4 Gadsden St. because it burned. A subsequent restoration had to be abandoned because the three-story masonry home was deemed so delicate as to pose a threat to workers' lives.

Meanwhile, another grand home in that neighborhood, 48 Smith St., burned two years ago and still hasn't been repaired.

"We’ve been trying to broker a deal on that for years now since the fire," Hastie said of 48 Smith. "What happens with a lot of these properties is people get very attached to real estate. You've lived there a long time, and people have unrealistic expectations about their ability to stay in the property."

The condition of the house has posed increasing concern to neighbors such as P.C. Coker. He noted with the loss of 4 Gadsden, "it is more important than ever that 48 Smith be saved from destruction."

The owner of 48 Smith St. has received BAR approval for partial demolition and stabilization, but the property remains untouched, with a chain-link fence blocking off the sidewalk immediately in front of it.

"Legally, there is little the city can do to force the owner to sell other than citing him for demolition by neglect and having the fire marshal declare the property a safety hazard and prohibit anyone living on it as they did after the fire at 4 Gadsden five or six years ago," Coker said.

Ricci oversees several livability inspectors who monitor the city’s vacant structures, both downtown and in the suburbs, and who seek to ensure these buildings remain are boarded up so they pose no safety threat and won’t deteriorate past a point of saving. But the city’s ordinances ultimately can’t require an owner to renovate their run-down property — only to secure it.

And even a secured property, if left abandoned for years, will stand only so long.

Jacob Lindsey, Charleston's planning director and Riccio's boss, said the city plans to focus on creating new tools to tackle demolition by neglect. By early next year, it hopes to revive its Demolition by Neglect Task Force that started work in 2011 but since became inactive.

"Buildings are neglected for a variety of reasons. It's complex," Lindsey said. "That's why we want to reform the Task Force and look at it from all angles."

There are several main reasons a building might be neglected for years: It's owned by multiple heirs who cannot agree on making repairs; it's involved in an inheritance dispute; its owner is a speculative investor, hoping the building is lost so the land can be redeveloped more profitably; absentee owners; and homeowners who want to stay but lack the money for repairs.

Lindsey said the Task Force will try to find different solutions for those different reasons, adding, "We want to provide new tools to the entire city to combat this."

Kristopher King of the Charleston Preservation Society agreed new tools are needed. Many buildings lost recently have had different contributing factors. "The reality is the only way to gain ground is by stronger enforcement by multiple layers and multiple departments in the city,” he said.

Tearing down a home in Charleston's historic district never easy, even when it's not historic

Part of the discussion will try to revive an old idea that has never quite born fruit: Fining more willful, neglectful property owners to create a fund to help maker repairs for homeowners with limited means. King said the city needs carrots, not just sticks.

O'Connor said she would like to see that, too.

"My goal is to keep people who want to stay in their home in their home," she said. "Affordable housing has always been on my radar when it comes to this."

The new attention to demolition by neglect is expected to involve a discussion about whether the city needs a new ordinance.

Kevin Eberle, a board member of SOS CHS and a Charleston School of Law professor, said it might.

City Council already addressed the issue of partial demolitions in its recent rewrite of the city's Board of Architectural Review rules, but that tackled the loss of historic features during a significant rehabilitation, not cases of neglect.

"My understanding is that as it written right now, basically, the only reason the city is entitled to step in is to prevent a public risk, that the building is going to collapse into the street," he said. "It's not even really supposed to be applied in mothballed-type situations."

Tackling the problem would be easier if the city required properties to have a certificate of occupancy within a certain period of time. But that would raise a big question: Would City Council be willing to reduce property rights by requiring property owners to make sure their properties are usable — at least within a certain time frame?

Another possible change would be to prevent new development for five or 10 years on any land made vacant by the neglect of a historic building on it.

"The other problem, I hate to sound like I'm talking out both sides of my mouth, is to find any kind of objective measure that would justify having the city go in and hire contractors to do basic remediation," Eberle said. "I don't have a good solution for that.

"I know something more needs to be done because they're are countless examples of surprising historic and notable buildings, especially uptown, that are just rotting away."

The problem goes beyond Charleston. In recent years, the Legislature considered a Dilapidated Buildings Act that would have allowed cities to move against owners of commercial properties that became a blight. If a city or town had exhausted all its other code enforcement and remedies, then the act would have allowed it to seek a court-appointed receiver to fix up the building or tear it down.

But it ultimately went down to defeat, said Scott Slatton of the S.C. Municipal Association. "It was the fear of treading on property rights." Since then, not much has happened on the state level to tackle the problem.

In recent years, the focus of Charleston's preservation groups has revolved around citywide livability, managing tourism, and the appearance of new construction.

O'Connor said SOS CHS is not trying to compete with those agendas but to add a new voice and encouragement to tackle the preservation of at-risk buildings.

"We're trying to stay in our lane," she said.

It is trying to make sure that houses such as 98 Cannon St. don't fall through the cracks. Riccio said the city has brought the owner of 98 Cannon St., North Sky LLC, to court several times, and the owner has had conversations with the city's Board of Architectural Review. Attempts to reach David Abdo of North Sky LLC last week were unsuccessful.

The case is scheduled to be back in Livability Court Monday, and time will tell what happens next. O'Connor and others will be watching in hopes something changes soon.

"The only thing that's holding the house up is its chimneys," she said. "It's heartbreaking to see these houses being lost. ... We need to look at it that way as a city. Once it's gone, it's gone. Yes, you can rebuild it so it will look exactly the same, but it's not."