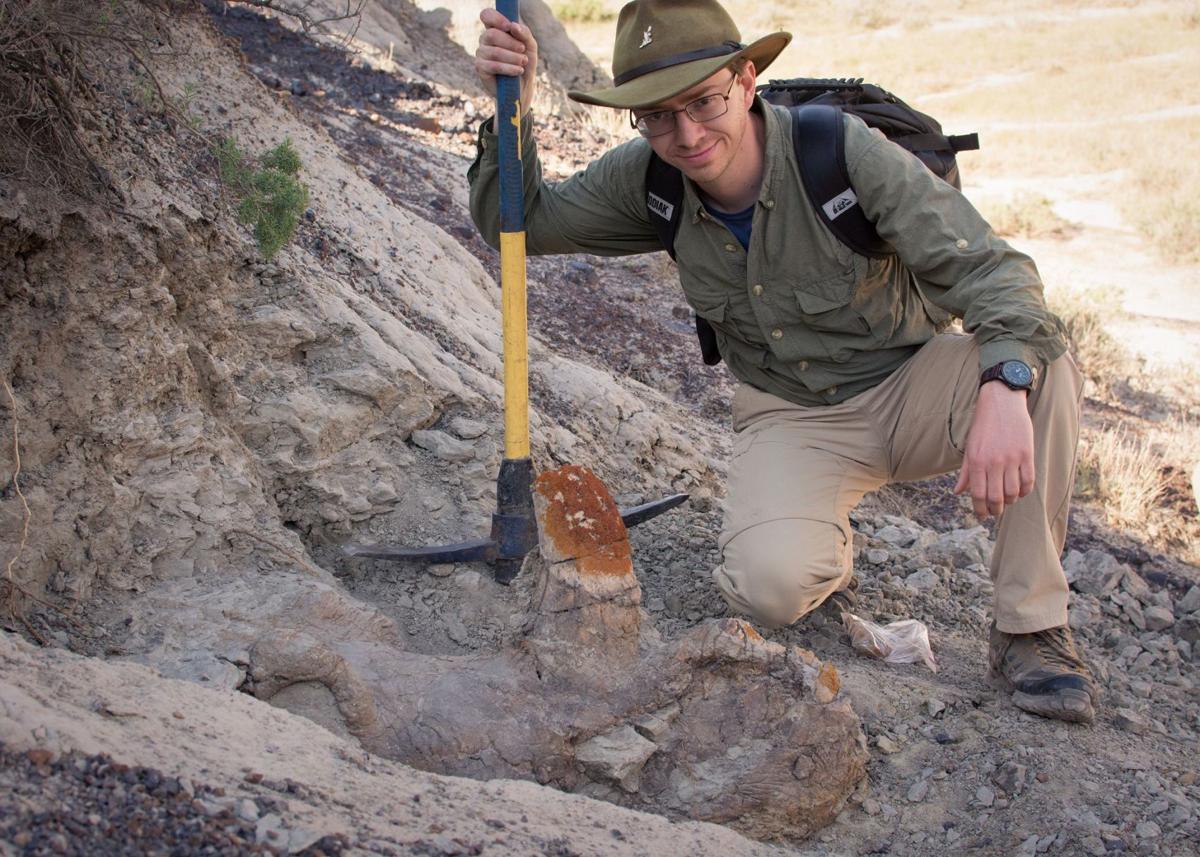 Scott Persons poses in front of the partially excavated dinosaur skull that he named "Hannah," after his pet dog. Provided 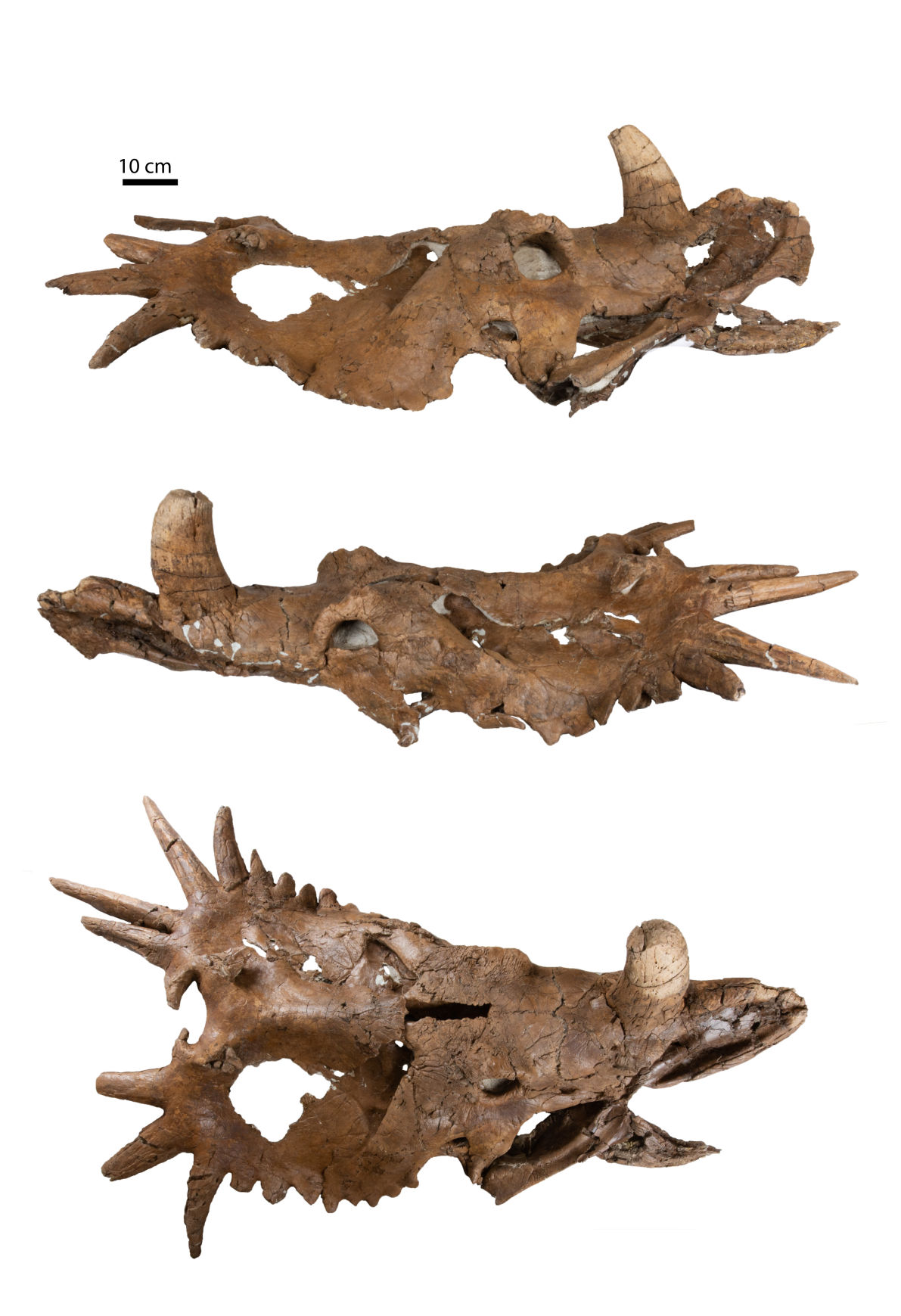 These images show the skull of a Styracosaurus from all angles. The specimen was found by Scott Persons, who recently was hired by the College of Charleston as a professor and museum curator. Provided 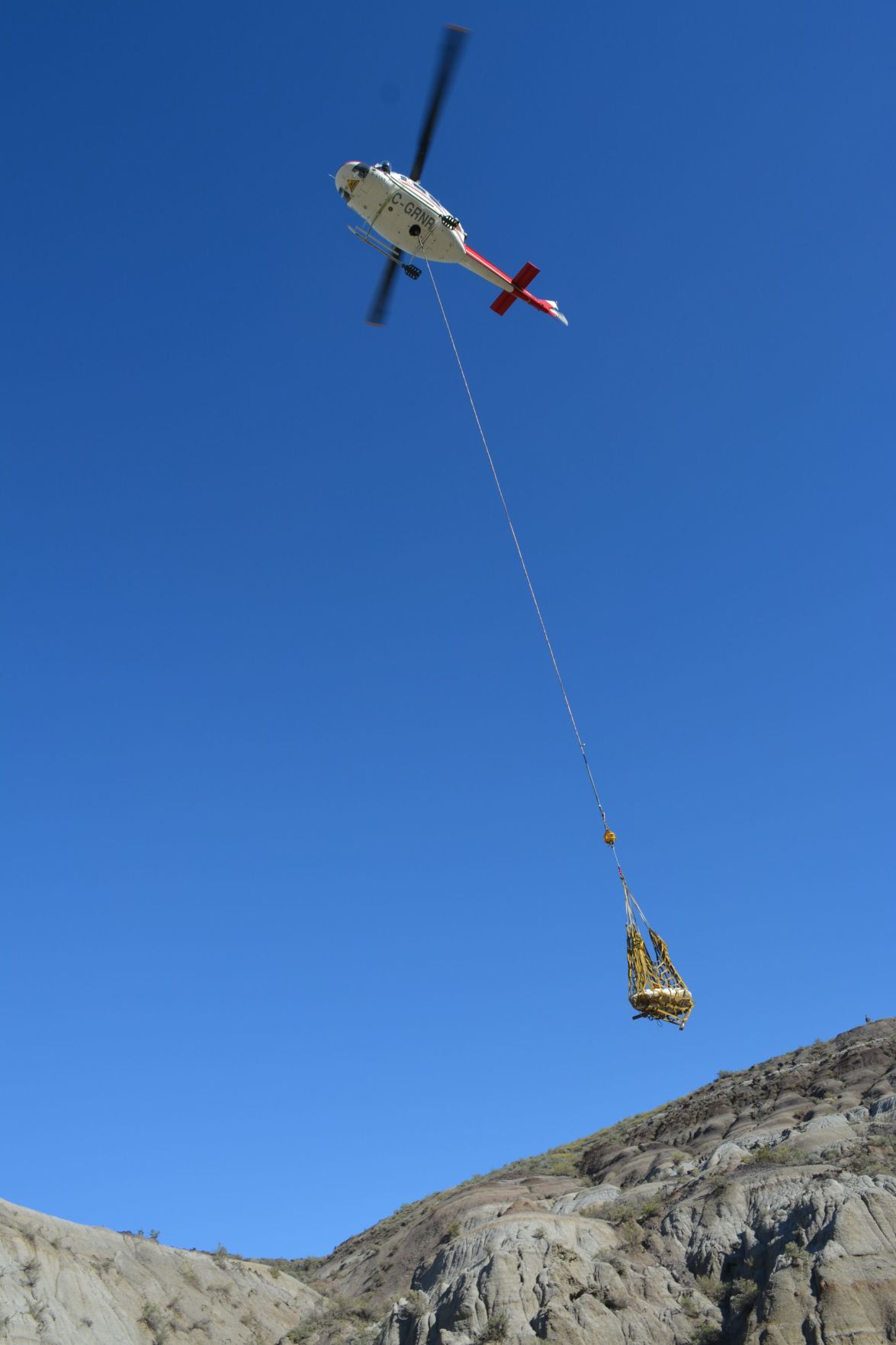 The dinosaur skull found by Scott Persons was so heavy it had to be airlifted via helicopter out of the field. Scott Persons/Provided 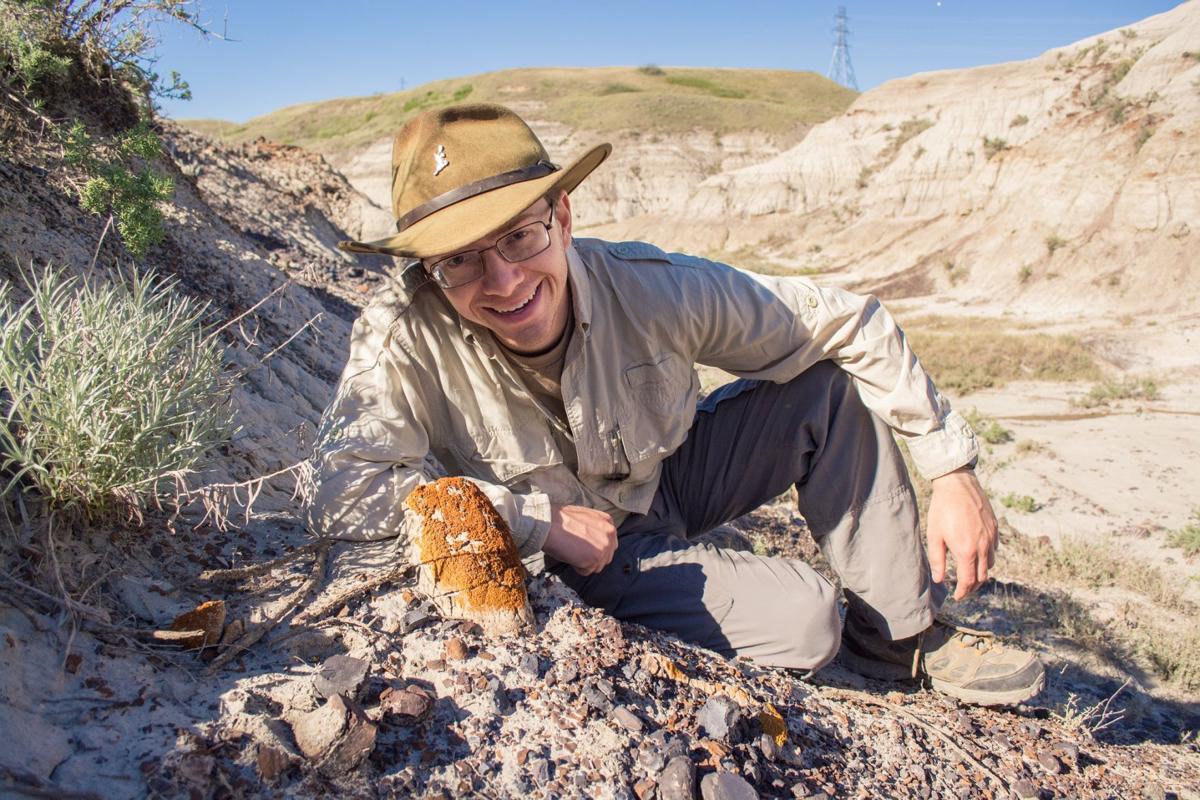 Scott Persons poses in 2015 in the badlands of southern Alberta, Canada, where he noticed this horn sticking out of the ground. It was attached to the skull of a Styracosaurus. Provided

Scott Persons poses in front of the partially excavated dinosaur skull that he named "Hannah," after his pet dog. Provided

Scott Persons poses in 2015 in the badlands of southern Alberta, Canada, where he noticed this horn sticking out of the ground. It was attached to the skull of a Styracosaurus. Provided

Before paleontologist Scott Persons arrived to work at the College of Charleston, he found a massive, spiky dinosaur skull in Alberta, Canada.

His find — named after his dog Hannah — was not a new species but instead provided new evidence that an existing species, Styracosaurus, a prickly beast whose body measures more than 16 feet long, had more variation in its horns than previously thought.

As a result, the find might lead to the "undiscovery" of some previously named species, such as Rubeosaurus.

"That was thought to be a species, but because of Hannah, it now may be considered just a Styracosaurus," he said. "That’s what’s interesting about the specimen. Even though it belongs to a species that we know about, it still shows a lot of variability in its horns. We knew there was something funny going on with the specimen when we were there in the field. Some of the horns were curling forward rather than inward."

Persons grew up in a small town outside Asheville, N.C., and went west to school to pursue his passion for paleontology. In 2015, he was part of a University of Alberta research team that explored the badlands of southern Alberta.

The expedition was largely a bust, until Persons hiked down a ridge and saw something poking straight out of the ground.

The horn, bigger around than a baseball bat, turned out to be attached to a huge, well-preserved skull. The skull and the sandstone adhered to it weighed more than a ton and had to be airlifted out of the field by a helicopter.

"That's sort of the nerve-wracking part of the excavation," he said. "If they lift it up and something is wrong, the pilot might have to make the decision to abort, which means he’ll drop the cable and the specimen will fall and shatter into pieces. That has happened on dinosaur airlifts before."

But the piece made its way safely to a lab, where painstaking work ensued to use an air scribe — a special tool that shoots out highly pressurized air — to break off the bits of rock around the skull.

While the find took place four years ago, Persons researchers only recently published their findings in Cretaceous Research.

“The skull shows how much morphological variability there was in the genus,” said Robert Holmes, who was part of the research team.

Also, Hannah’s horns are not symmetrical: those on the left side are larger than those on the right, and researchers aren't sure why. It might stem from an injury during childhood.

"Something happened to the left side of the face, probably when Hannah was young and the skull was still growing," Persons said. "It wasn’t lethal, Hannah lived through it, but afterward the skull bones grew in a strange way.”

Like the antlers of today's deer and moose, Persons' find shows that dinosaurs' horn patterns could vary within a species. And that might lead to revisionist work on some existing dinosaur species thought to be unique.

Meanwhile, researchers also will work on removing sandstone from the rest of Hannah's body. The skull is not currently on display anywhere, but Persons, who both teaches in the college's Geology Department and serves as curator of the Mace Brown Museum of Natural History, hopes that will change one day.

"Like a lot of things, that’s a matter of funding," he said. "We have high hopes.”