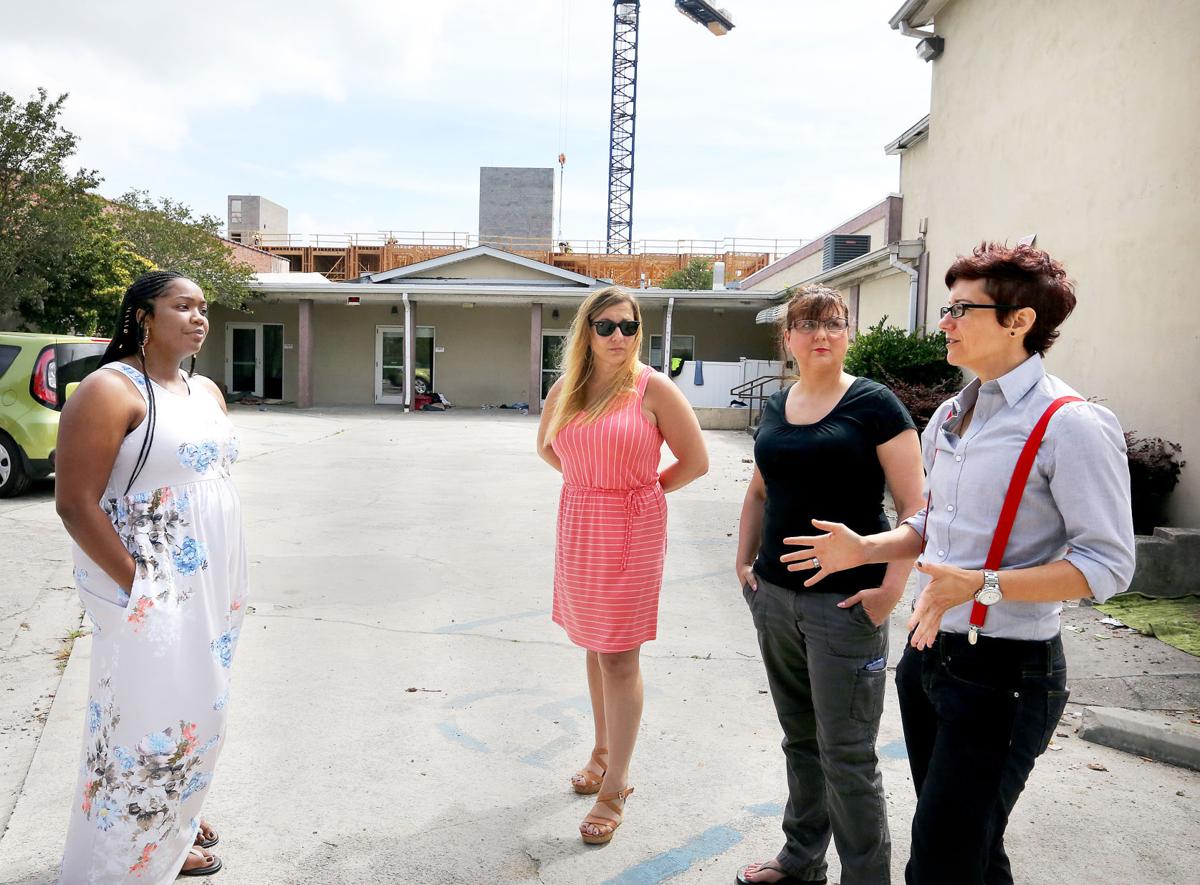 Melissa Moore (from right), executive director of We Are Family, an LGBT advocacy organization, consults with Renee LeGare and Elizabeth Wincenaiak of Origin SC, and Sharana Sloss of Loving Arms, outside the building that will become a new daytime resource center for homeless people. Brad Nettles/Staff 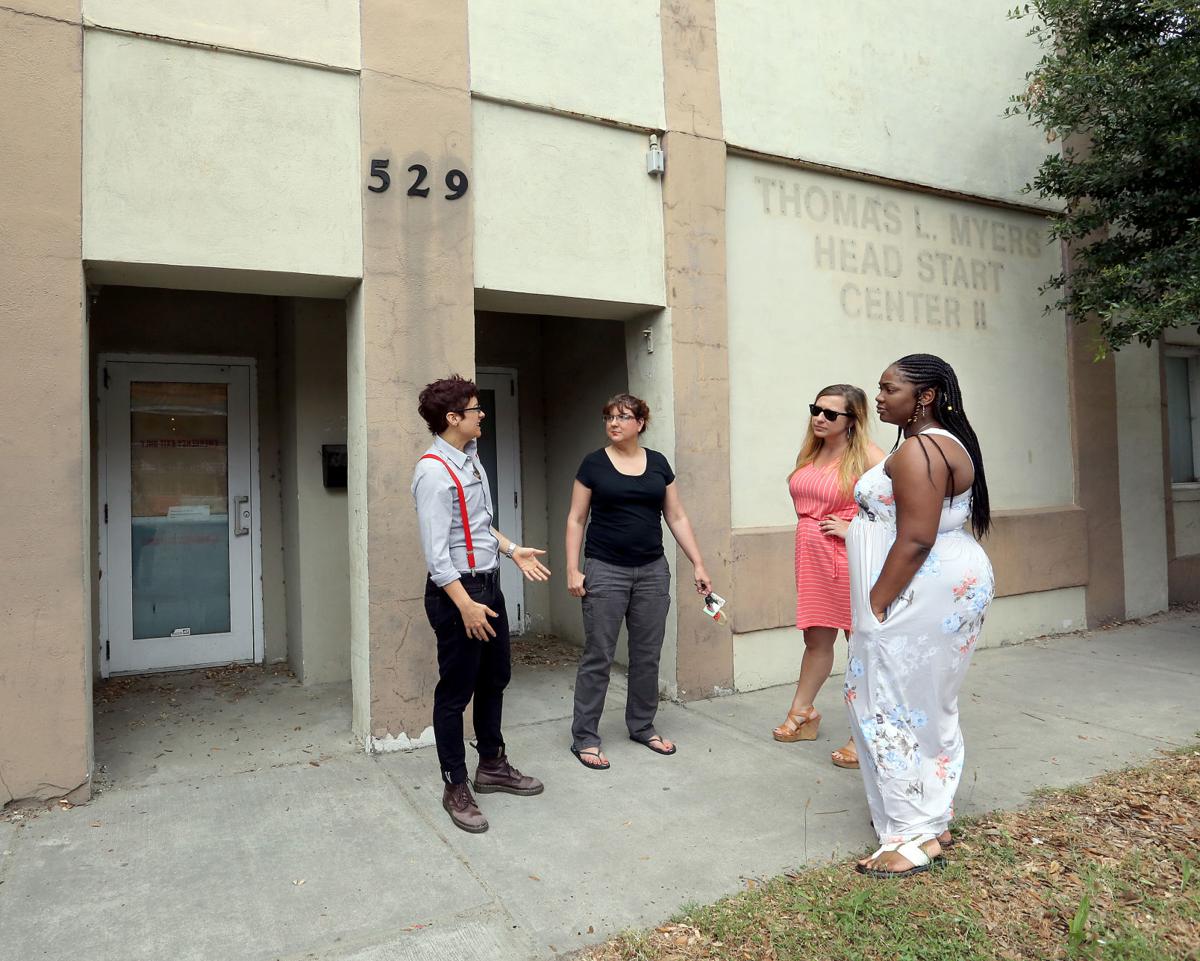 Melissa Moore (from left), executive director of We Are Family, with Renee LeGare and Elizabeth Wincenaiak of Origin SC, and Sharana Sloss of Loving Arms, at the front of the 529 Meeting St., which is to become a temporary day center for the homeless. Brad Nettles/Staff 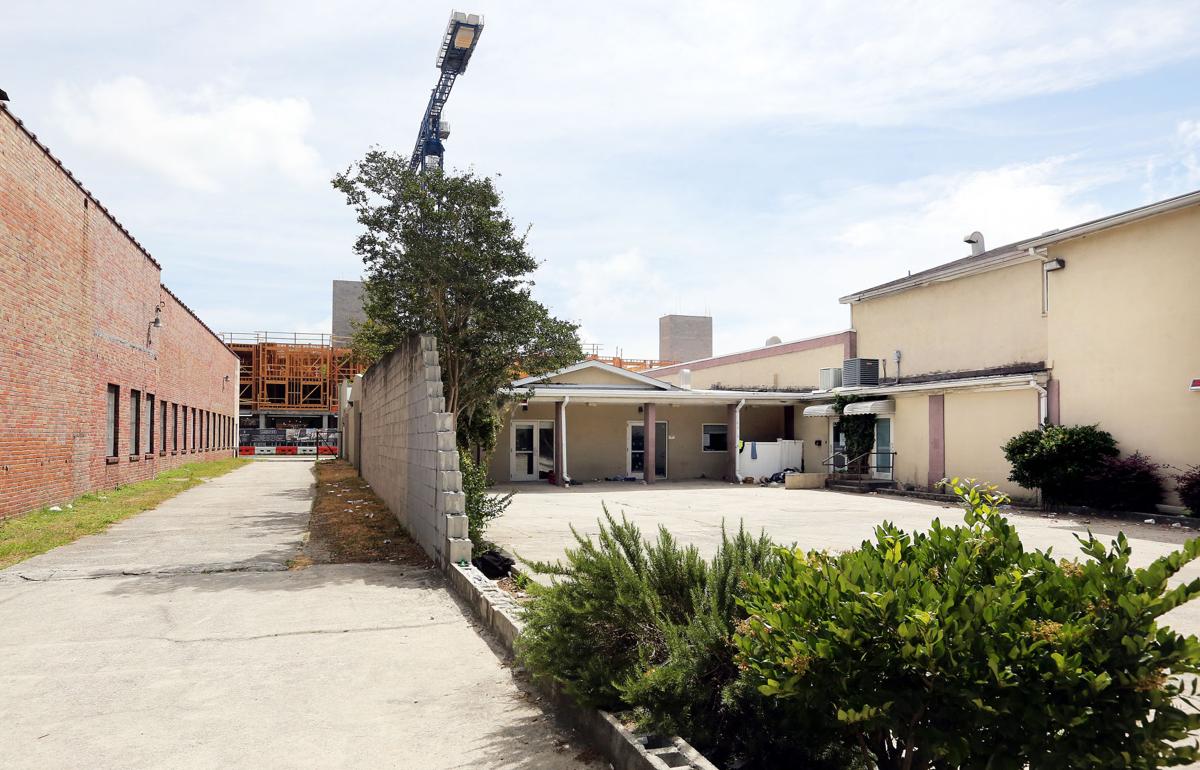 Nonprofit leaders involved in establishing a new day center for the homeless hope to decorate the property with murals and art installations. They also want to organize a marketplace in the alley next to the building. Inside, a thrift store will help generate revenue. Brad Nettles/Staff

Melissa Moore (from right), executive director of We Are Family, an LGBT advocacy organization, consults with Renee LeGare and Elizabeth Wincenaiak of Origin SC, and Sharana Sloss of Loving Arms, outside the building that will become a new daytime resource center for homeless people. Brad Nettles/Staff

Melissa Moore (from left), executive director of We Are Family, with Renee LeGare and Elizabeth Wincenaiak of Origin SC, and Sharana Sloss of Loving Arms, at the front of the 529 Meeting St., which is to become a temporary day center for the homeless. Brad Nettles/Staff

Nonprofit leaders involved in establishing a new day center for the homeless hope to decorate the property with murals and art installations. They also want to organize a marketplace in the alley next to the building. Inside, a thrift store will help generate revenue. Brad Nettles/Staff

Peril can lurk around the corner for LGBTQ youth. As they come to terms with their sexual identity, some find themselves adrift, often endangered.

For those with families that don’t accept them easily, or right away, they might be cast out of their homes, or feel compelled to flee. Some churches are not a welcome refuge. Traditional homeless shelters often are inhospitable, even threatening, to young gay and lesbian people, who are forced to find their own way.

This is what happened to Melissa Moore at about the time she graduated high school in Charleston in the mid-1990s.

“I was taught that being queer was a really bad thing,” she said. The start of college brought no relief. She was “out” but far from certain about who she was and what she wanted, she said. She experienced sexual and physical violence, and she started using drugs. What she needed was a safe zone and access to people trained to help her.

“One trauma can be the difference between life and death,” she said.

Today, Moore is executive director of We Are Family, an LGBTQ advocacy organization, and she’s working on a big project that could make a difference not just to young gay, lesbian and transgender people, but to many who endure homelessness in the Charleston area.

The idea has been brewing for years, she said. A significant number of LGBTQ youth in Charleston County, perhaps around 300 a year, experience homelessness and need protection, she said. Nationwide, up to 40 percent of more than a million homeless youth are LGBTQ, a disproportionate number that worries advocates like Moore.

These young people end up transient, borrowing couches or even sleeping in the streets. Sometimes the uncertainty and unrootedness lasts only a few days, sometimes much longer, Moore said.

The nonprofit team will spend the next month or so cleaning, painting and installing furniture and supplies. A thrift store will generate some needed revenue.

The project, which is meant to provide daytime services to all homeless people, not only LGBTQ youth, has been embraced by the city as part of its effort to address homelessness.

Geona Shaw Johnson, the city’s director of housing and community development, said the resource center, located steps from the city’s only homeless shelter One80 Place, fills a void.

One80 Place, which accommodates up to about 100 men and 60 women and children, provides a temporary roof; offers legal, veteran, health care and job training services to its clients; provides transitional housing; and works with public agencies and private landlords on long-term housing solutions.

But not all homeless people take advantage of a shelter. For LGBTQ youth, the shelter — any shelter — might not provide a welcoming environment. And those who are not on the books at One80 Place don’t have easy access to services.

“The day center provides opportunities for those persons who would normally be on the streets to come into the center,” Johnson said. “The ultimate goal will be to transition (them) into housing.”

But housing alone, though essential and in short supply, is insufficient, Johnson said. People need to develop skills and find employment and earn a wage so they might be “housed in such a way that they will be sustained and successful.”

Meanwhile, the city is addressing a shortage of “affordable housing” in a variety of ways that ultimately might help prevent some low-income renters from slipping into homelessness. During the next five years, more than 2,000 new units should become available to qualifying low-income renters and buyers, 800 of which will be funded as a result of a $20 million bond referendum that passed in November.

The need is indisputable: Average rent is $1,600 a month in the Charleston area, and home buyers need to earn at least $55,000 if they hope to buy a property in the tri-county metropolitan area.

For some, such hopes are too far out of reach.

LaVanda Brown, executive director of YWCA Greater Charleston, said her organization got involved in the day center project “because we want to be part of a solution to address homelessness.”

“Our target populations are women and families,” Brown said. “Too often they go unnoticed, uncounted. They stay with friends, families, doubled up, or stay in hotels. They are doing the best they can to avoid ending up in a shelter. ... Often, such homeless people don’t have easy access to resources and are not therefore counted.”

So Brown wants to strengthen the social safety net and connect such people in need with resources they might find at the new center during its pilot year.

“We feel very strongly that it is a cost-effective way of providing services,” she said. “We will continue to do what we do, but bring it together (with other nonprofits) under one roof.”

Moore said the center will serve all populations experiencing homelessness, with each agency focusing on its particular constituency. We Are Family will work with LGBTQ youth. Loving Arms also will serve youth and help develop transitional housing. Origin SC will provide rental assistance.

“The center will not have a shelter on site,” she said. “The whole point of it is to offer wrap-around services to help people be successful in their housing placements.”

A small grant will help pay short-term hotel costs. We Are Family might also be able to place a few young people with designated host families on a short-term basis, Moore said. Health care services could be part of the equation, thanks in part to an alliance with the Medical University’s Center for Telehealth, she said. And the day center will include an arts component provided by the Latino-run nonprofit Art Pot.

Art Pot volunteers will help maintain the property and emphasize diversity and collaboration, according to Executive Director Maribel Acosta.

“I will take responsibility within the project as creative art director,” Acosta wrote in an email. “Workshops and projects will be carried out with the collaboration of local artists.”

The center, therefore, will offer a respite from bad weather and the trials of the street as well as an environment that can “generate new ideas and hopes,” Acosta said.

In April, the city passed a “sit-lie” ordinance that prevents people from loitering in one place along King and Market streets. The law, a “promotion of civil sidewalks,” is meant to curb panhandling in front of shops and restaurants.

Critics argue that such laws curb an individual’s constitutional rights of express and free movement in public places, and that they are punitive efforts to rid the streets of homeless people.

Stacey Denaux, executive director of One80 Place, said alternatives are only helpful if they guide homeless people to the essential services they need. A park bench does nothing to address the problem of homelessness. Neither does a day center if it can’t lead to the provision of permanent solutions, Denaux said.

“I think having a place for LGBTQ youth to go to search for housing, and to get their needs met is critically important for this community,” she said. “If we are creating this day center as a way to move homeless people out of the popular parts of our community, then I think we are heading down a slippery slope toward criminalizing homelessness.”

Susan Dunn, legal director of the ACLU of South Carolina, said she doesn’t foresee a big legal problem with the ordinance. It doesn’t apply to the whole city, and it doesn’t forbid anyone from being on King or Market streets; it only limits their ability to sit or lie down on the narrow sidewalks, she said.

The bigger concern, Dunn said, is the city’s strategy — or lack of it — for mitigating homelessness.

“It seems like the city is just hoping private-sector partners will take care of it,” she said. “I think that is kind of optimistic. I know that We Are Family have thought and planned long and hard about their agenda, but I’m not sure the same could be said for the city.”

Nevertheless, she applauds the city’s effort to secure the space for a temporary day center, and its intention to find a permanent space.

“Sometimes, if the place is available, it may be the wisest thing to jump in even though you’re not sure what it is you’re going to do,” Dunn said.

“(The city has) made the commitment to enter into this lease agreement, and made a commitment to pay the cost, so that we can all come in and have a space to deliver these services,” Williams said. “If we don’t assist these young people with becoming contributors to our society, then we all pay.”