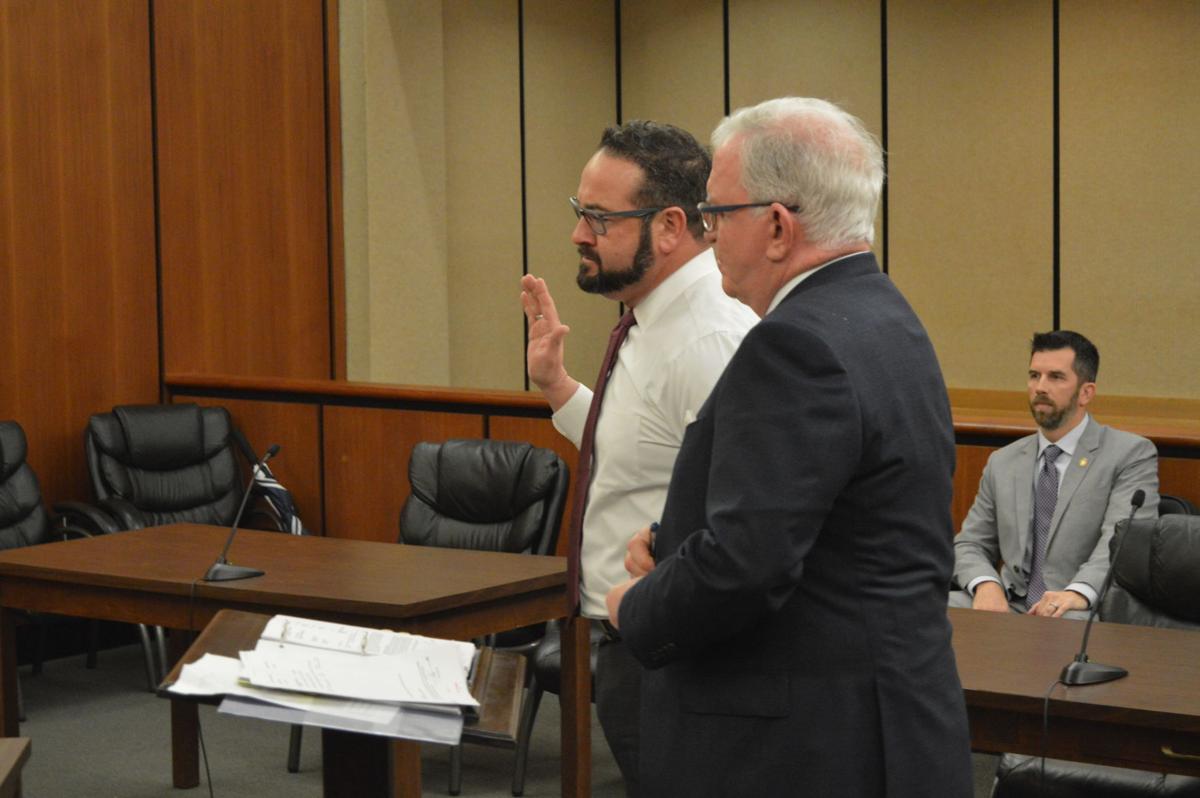 Colleton County Sheriff Andy Strickland (left) appeared in a Columbia courtroom on Feb. 18, 2020, on charges that he ordered deputies to improve his home, embezzled money and forced a sexual relationship with a subordinate. Joseph Cranney/Staff 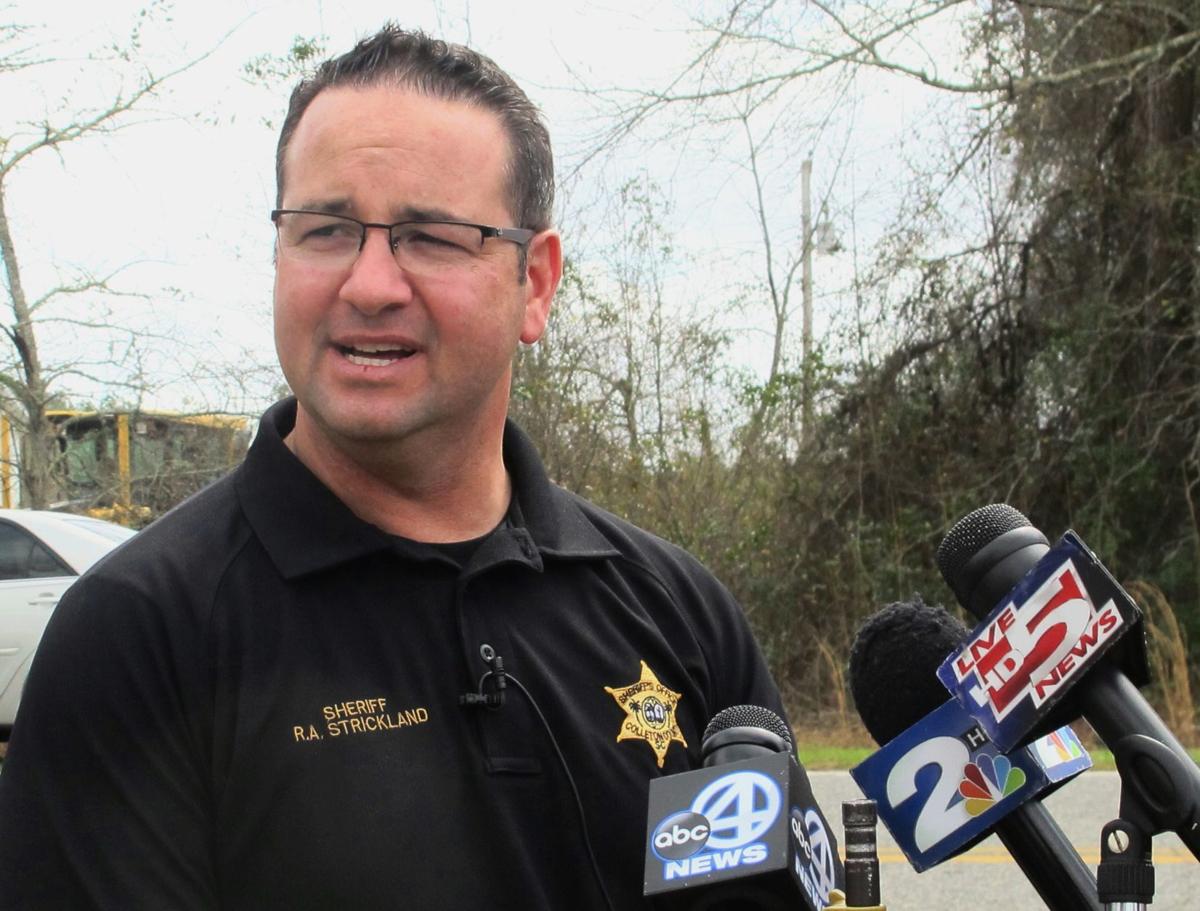 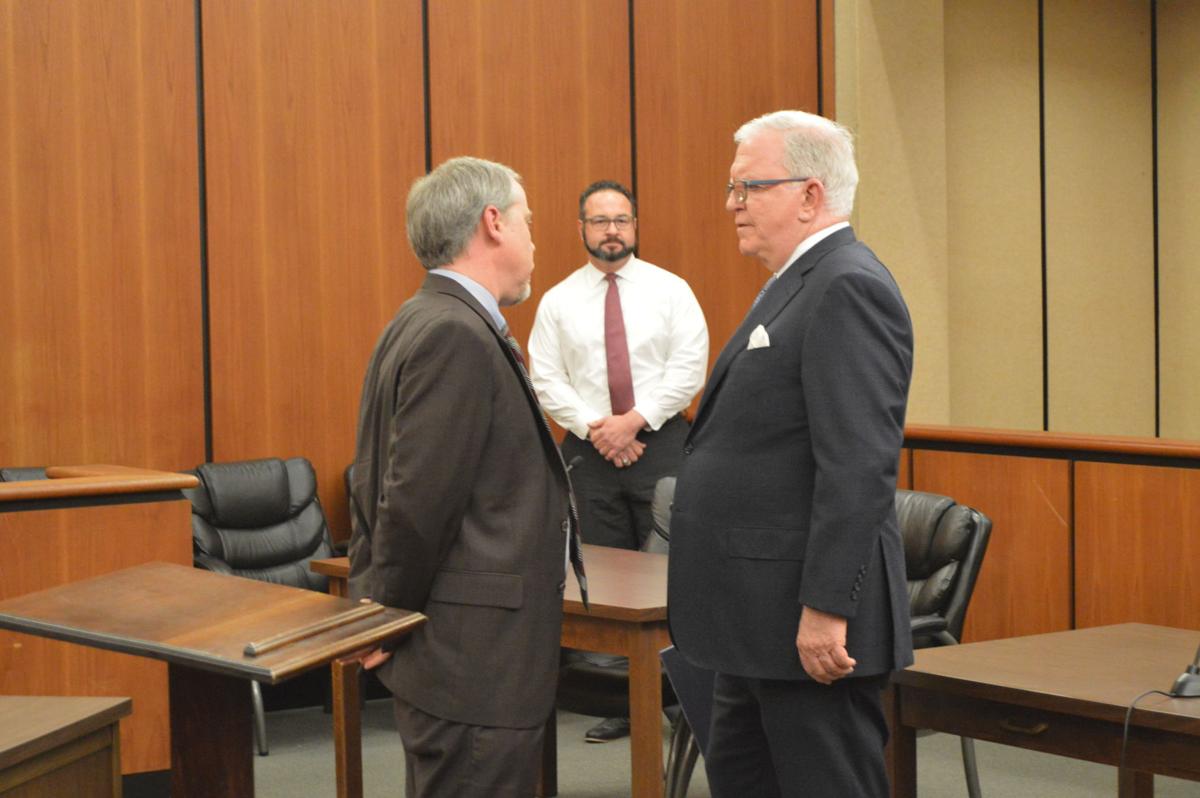 A South Carolina grand jury on Tuesday indicted suspended Colleton County Sheriff Andy Strickland on new public corruption and misconduct charges, alleging that he used his power as sheriff to coerce an employee into a sexual relationship and ordered deputies to work on his home while they were on duty.

Three hours after the grand jury released its findings, Strickland was in Columbia for a bond hearing before Circuit Court Judge DeAndrea Benjamin. Joining Strickland was Charleston attorney Andy Savage.

Creighton Waters, a prosecutor with the S.C. Attorney General's Office, said that Strickland directed deputies to do construction and brush clearing at his home. Strickland also ordered deputies to help him flip houses, sell used appliances — even do campaign work on county time.

"They actually had a name for it," Waters told the judge. "They called it a Code 48. If you were Code 48 with the sheriff, everybody understood what that meant."

Waters cited another allegation that Strickland went to Myrtle Beach to pursue an affair with an employee under 21 years old, and that he gave her alcohol and Ambien, a prescription drug used as a sedative.

Witnesses broke down in tears as they spoke with investigators, Waters told Benjamin. "They felt that violence might be done against them."

Savage told the judge that Strickland was receiving treatment in Charleston but declined to be more specific.

Benjamin set Strickland's bail at $25,000 and ordered him to surrender his firearms, undergo GPS monitoring for 90 days and have no contact with witnesses or employees. Strickland then left through the back door of the courtroom without speaking to reporters.

Savage, however, said that the stream of indicted sheriffs reflects a shift of attitudes toward law enforcement nationally. "The default position today is that the law enforcement officer is wrong. The world has changed."

The indictments marked a stunning downfall for Strickland, 40. He was the state’s youngest sheriff when he was elected in 2012, replacing George Malone, who opted then not to seek a third term. Strickland previously worked as a trooper for the state Highway Patrol and for short stints with the S.C. Department of Natural Resources and Cottageville police.

After taking the reins in January 2013, he was credited with turning around a 66-deputy department suffering from low morale and a perception that it had failed to curtail gang violence. He did so, locals said, by getting involved in the Walterboro-area community where he has spent his entire life.

He told The Post and Courier in 2014 that his love affair with police work started after his father died when he was 10. He started looking up to a friend’s dad, a trooper in the S.C. Highway Patrol.

“I don’t come from politics,” Strickland said at the time.

But last year’s Post and Courier “Above the Law” investigation showed how a startling number of sheriffs across South Carolina lined their pockets on the public’s dime, tried to silence whistleblowers and bullied other public officials who questioned their behavior. And, Strickland’s spending and questionable behavior surfaced in the course of the newspaper's reporting.

Among the paper's revelations: Strickland used $1,500 in county tax dollars for a separate hotel room during a sheriffs conference in Myrtle Beach. He spent the money on a separate room for his children, he later confirmed. Social media posts show Strickland in Myrtle Beach with his kids and a female county employee.

At the time, Strickland defended the expense as "not a vacation" and told the newspaper he had nothing to hide.

Then, in November, his tenure as sheriff unraveled.

He was charged with domestic violence after allegedly punching a member of his household in the face several times, then preventing her from calling 911, state authorities said.

He earned about $80,000 a year, according to a filing with the South Carolina Ethics Commission.

Tuesday's indictments painted a damning portrait of a public official using his position for private gain.

One count alleged that Strickland used public money on "non-official lodging expenses during a law enforcement conference in Myrtle Beach."

During the bond hearing, Savage insisted that the sheriff reimbursed the county $1,500 for his Myrtle Beach trips.

But a prosecutor said "that only happened after" those excursions were revealed in The Post and Courier.

Another indictment count alleged that Strickland directed deputies and office staff to work on his land, home and businesses.

The indictments also said he gave a radio worth about $3,000 to an unidentified person "with no valid official purpose." Doing so gave the person access to "first responder communication channels," the indictments said. 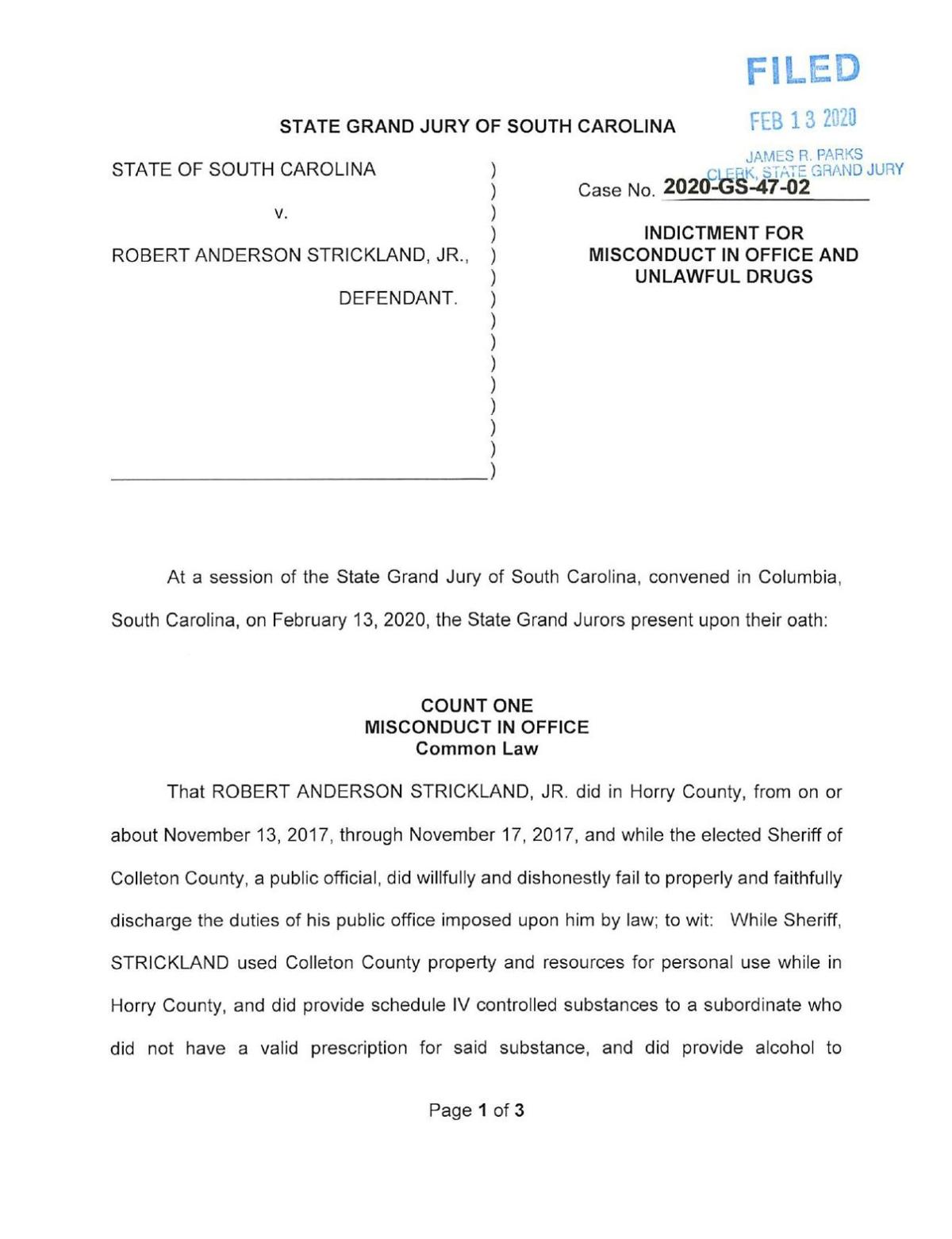 Further counts described allegations that Strickland used county vehicles and tools "for personal work on his properties and businesses," and that he had deputies and staffers do political campaign work for him while they were on duty.

The indictments also went to the heart of the power imbalance between a sheriff and his employees.

Under South Carolina law, staffers work "at the pleasure" of sheriffs, meaning they can be fired for no reason.

One indictment count described how Strickland got "free labor" to work on his properties and businesses from deputies who “depended on Strickland’s good graces for their continued employment.”

Strickland's business ventures remain murky. Public officials are required to describe their business ventures to the S.C. Ethics Commission. However, Strickland listed the sheriff's position as his sole source of income, a Post and Courier review of commission records found.

The Colleton County Sheriff’s Office offered no comment on the indictments against their former leader. The only posts on the agency’s Facebook page Tuesday concerned a missing man and a planned “Cops and Kids” event at a local Burger King.

The Post and Courier reached out to several Colleton officials, including the five members of County Council and Walterboro’s mayor. None were immediately available to comment about Strickland’s downfall.

Tuesday's indictments raise fresh questions about how some South Carolina sheriffs wine and dine themselves on the public tab and misuse their office in other ways. The state's ethics law prohibits public officials from using their positions for their own and their family's personal gain.

In the past, 14 sheriffs have tagged for violating laws they swore to uphold. Some charges were relatively minor, others were more serious. Here's a sample of some of the scandals

2010, Lee County: Sheriff E.J. Melvin is tried on charges that he turned his office into a sprawling criminal enterprise of drug dealing and fraud.

2010, Union County: Sheriff Howard Wells is accused of concealing income from sizable loans to a person, and then trying to persuade that person to lie. He gets 90 days in prison.

2011, Laurens County: A Laurens County Sheriff's Office employee sues Sheriff Ricky Chastain, alleging that she was sexually harassed and forced out of her job after she refused the sheriff's request to have a second abortion. Chastain lost his re-election bid. No charges were filed.

2012, Charleston County: Sheriff Al Cannon was charged with a misdemeanor after slapping a man after a high-speed chase. He was eligible for pre-trial intervention.

2013, Abbeville County: Sheriff Charles Goodwin was sentenced to probation after pleading guilty to misconduct charges that he took kickbacks.

2014, Lexington County: Sheriff James Metts was sentenced to probation after prosecutors alleged he took bribes to help illegal Mexican immigrants get out of jail.

2014, Chesterfield County: Sheriff Sam Parker convicted on public corruption charges that he helped inmates get out of jail in exchange for working on his house.

2014, Darlington County: Sheriff Wayne Byrd admits in court filing that he had an affair with an employee. Byrd lost his re-election campaign in 2016. No charges were filed.

Still, 14 South Carolina sheriffs — including Strickland — have been accused in the past decade of breaking laws they swore to uphold.

Other sheriffs highlighted in the newspaper’s "Above the Law" report include Alex Underwood and Kenney Boone.

As with Strickland, Underwood is accused of ordering deputies to work on his property. Underwood also was indicted on charges that he used public funds to fly his wife to Nevada for a sheriffs conference and siphoned money from jail accounts for personal use.

Because of these and other criminal charges, government watchdogs have called for reforms.

So far, South Carolina lawmakers have done nothing to slow the parade of scandals.

Joseph Cranney of The Post and Courier contributed to this report.