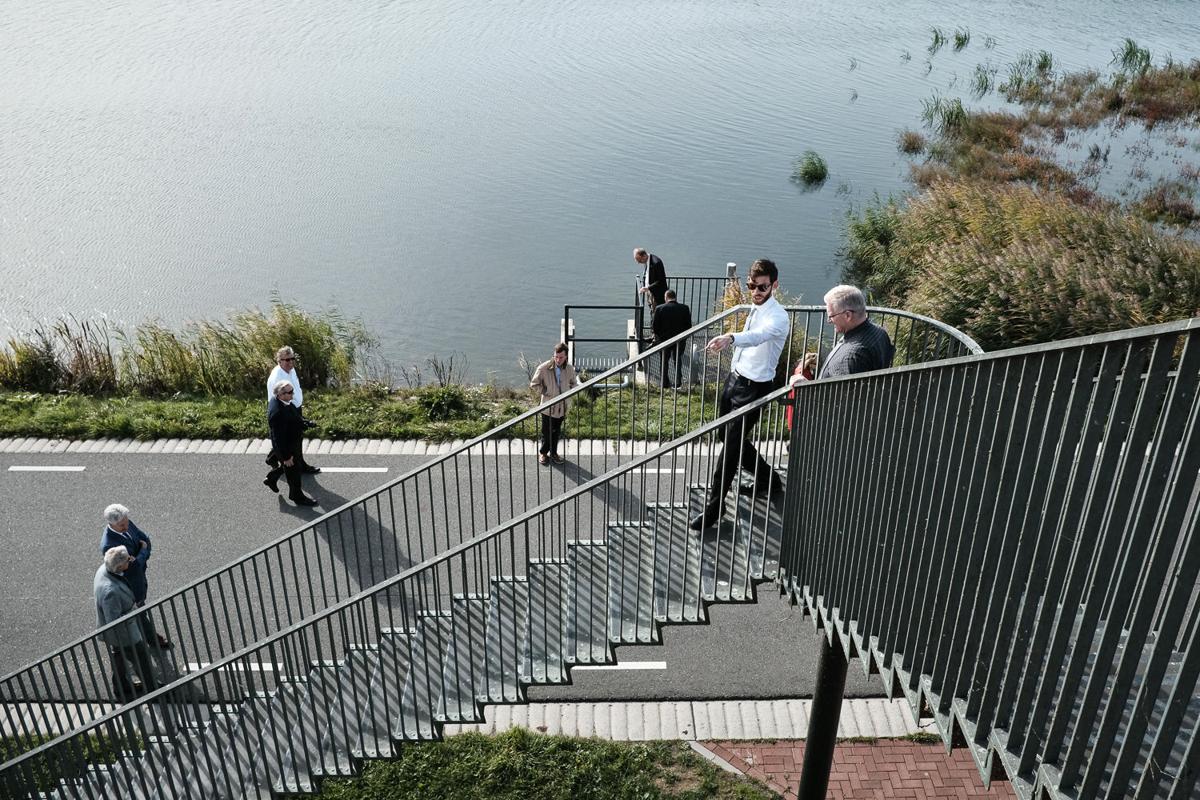 Charleston's delegation to the Netherlands visit a pump station at the Noordwaard Poulder site, one of the Netherlands' recent Room for the River projects. There were 33 bridges and 13 pumping stations built for this single project. Jared Bramblett/Provided 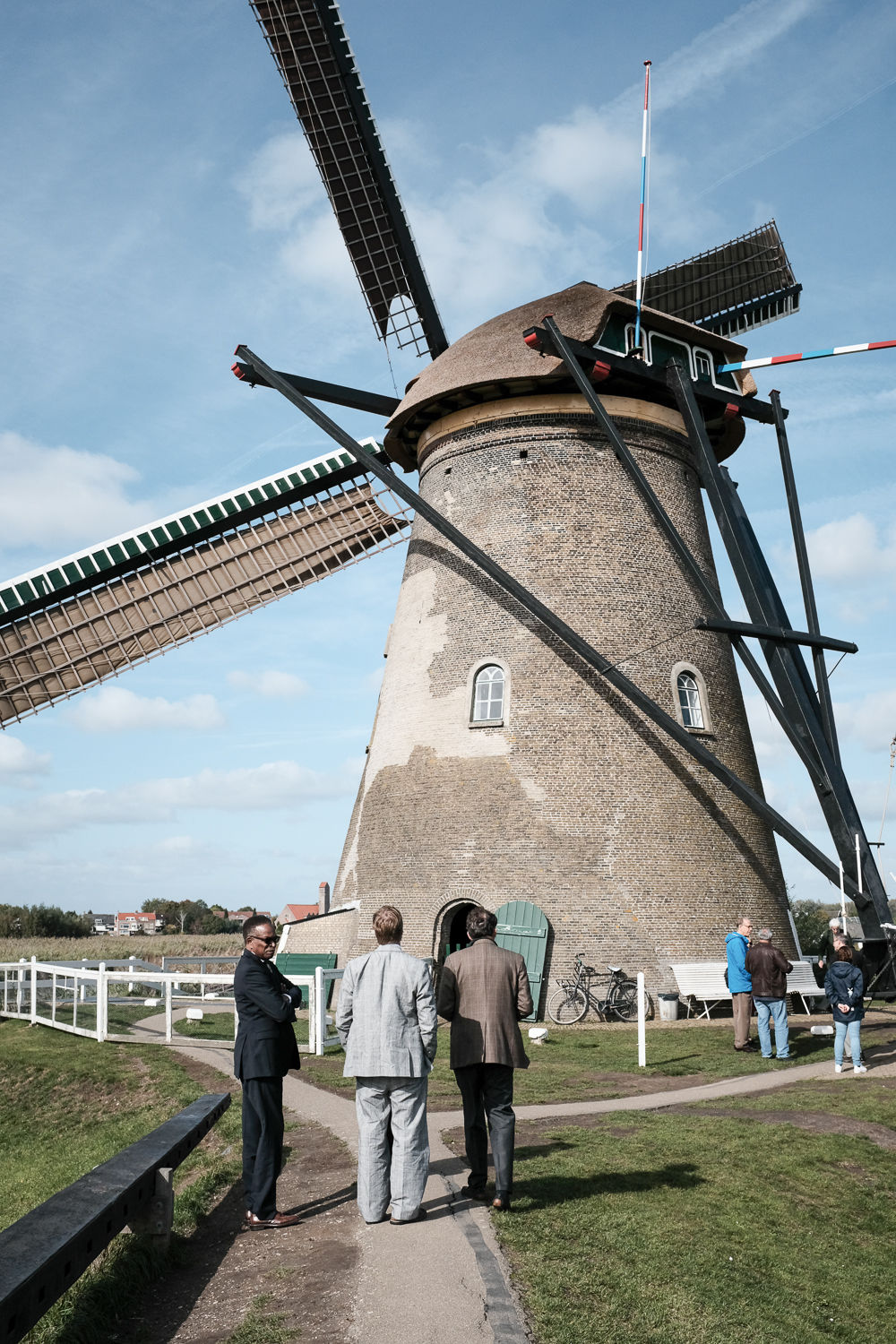 Charleston City Council members William Dudley Gregorie, left, and Mike Seekings, right, flank Winslow Hastie of the Historic Charleston Foundation as they look at a windmill now part of the Kinderdijk World Heritage Site. The Dutch once had more than 10,000 windmills to pump water out of low-lying land. Jared Bramblett/Provided 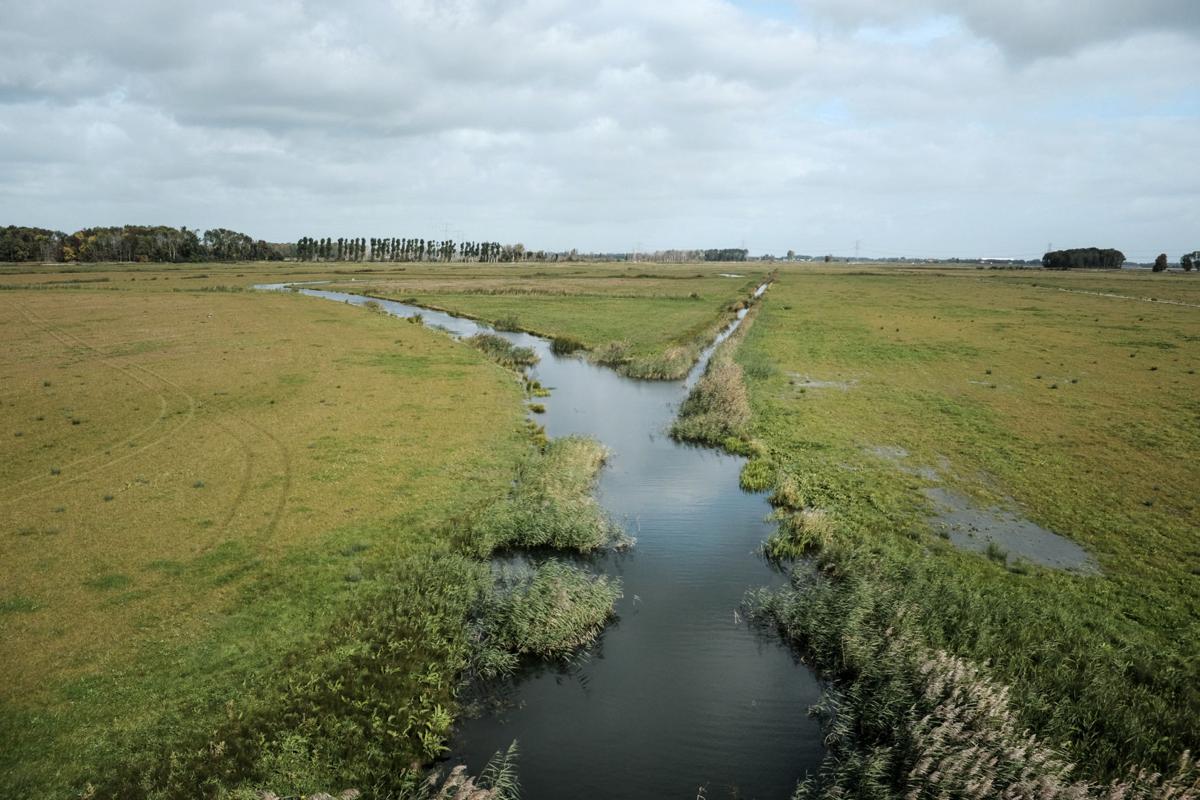 The Noordwaard Poulder project covered more than 10,000 acres, including these canals to help the water flow through. The area may look natural, but it's a man-made "Nature Development Area." Jared Bramblett/Provided 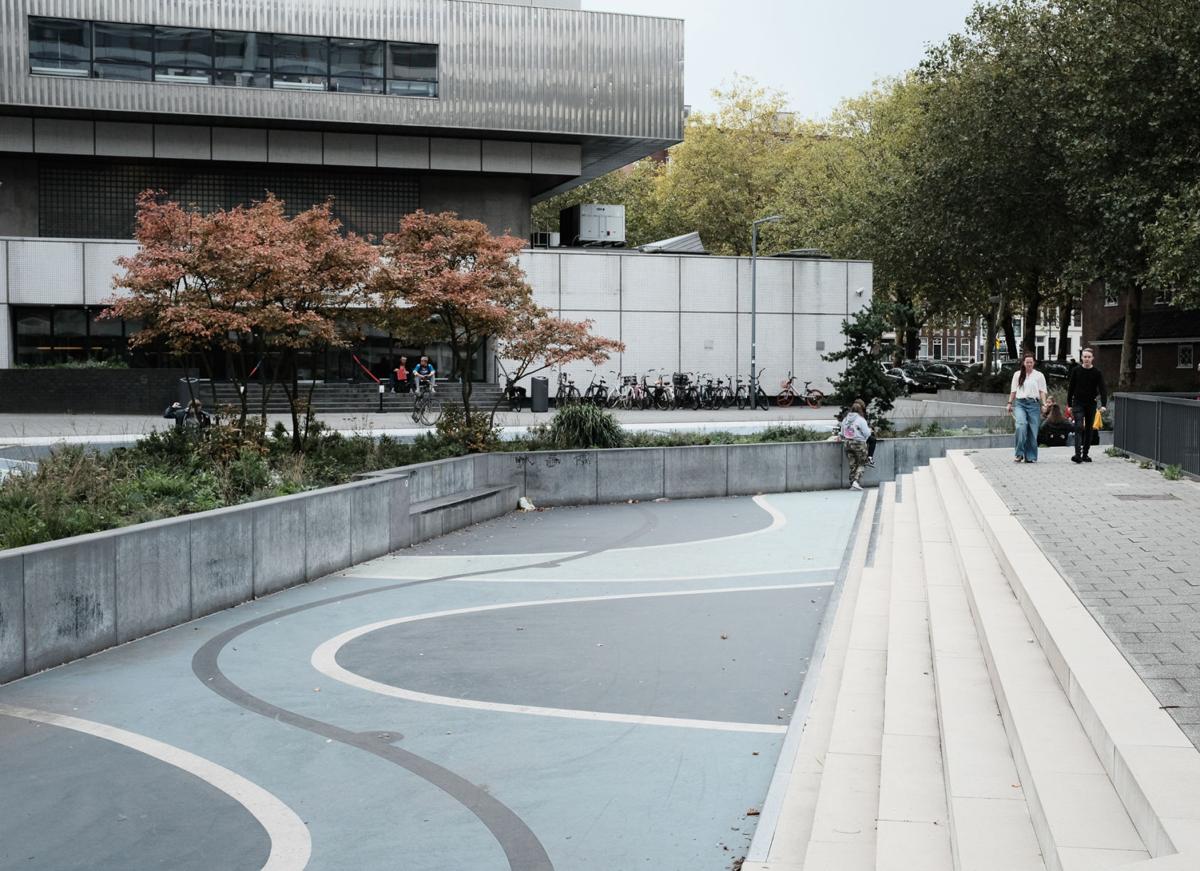 This area in Rotterdam's ZoHo district serves as an amphitheater, skate park and basketball court on most days but will hold rainwater if needed. It's an example of how the Netherlands' approach to flood control extends beyond managing water to improving the quality of life. Jared Bramblett/Provided 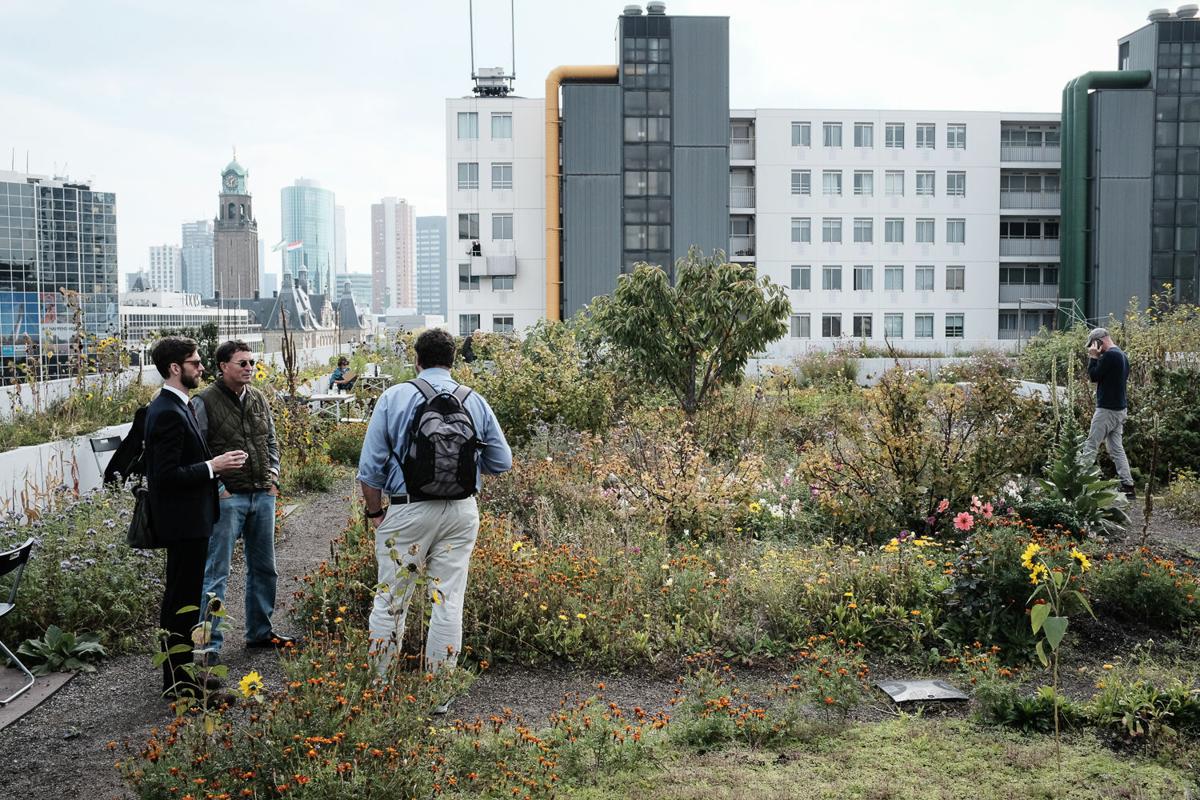 Apartment buildings and trees bobbing in the water off Charleston's High Battery. A "blue roof" on City Hall able to store rainwater. Dry river beds that serve as a park with an amphitheater until a heavy rain falls.

None of these things are in the works as Charleston grapples with its dual challenges of climate change and upgrading its flood infrastructure.

But city officials now know such things are possible.

That's because they saw them in the Netherlands, where Mayor John Tecklenburg and several other top city officials and others recently spent a week learning more about how the small low-lying coastal nation has learned to live with water.

Their visit was part of a larger dialogue that began in March when the Netherlands' U.S. ambassador and two other experts visited here to learn more about the Lowcountry's challenges. The conversation is expected to continue in coming months as the city and surrounding region plan for a future with higher seas and more intense storms.

Tecklenburg said he was struck by how ingrained managing water is in the Dutch culture, which integrates it into new development, transportation, agricultural and recreation.

"Yes, they have the great technology with pumping systems where needed," he said, "but they're really being more thoughtful about using nature and, in new development, making sure new development not only doesn't harm the drainage for surrounding properties but in fact contributes some benefit to managing water."

Flood projects are built on huge and small scales. Many have another purpose besides handling water.

Mark Wilbert, Charleston's chief resilience officer, said he was struck by the Netherlands' cultural shift compared with here, particularly when he asked an engineer there about flood insurance.

"He looked at me like I was crazy," Wilbert said. "He said, 'Why would we have flood insurance? We don't flood.' Here you are, below sea level and the whole country is protected by dikes, but their culture is they're going to keep their water out."

In 1953, the Netherlands suffered catastrophic flooding that killed more than 1,800 people, and the nation vowed never to let that happen again.

Even though more than a third of the country lies below sea level, there's not been a single flooding death, largely because of a series of ambitious public works, including its most recent $3 billion "Room for the River" program.

But flood control there dates back to the early 13th century, when hundreds of democratically elected boards — whose jurisdictions follow floodplains — were created to build, operate and maintain a network of dikes. The nation's iconic windmills, which once numbered more than 10,000, weren't built to mill grains but to power pumps that removed water.

Some of Europe's largest rivers flow through the Netherlands, while it also faces surges from storms in the North Sea. Meanwhile, much of its land is peat — decayed organic matter that will sink if the groundwater levels drop too low.

"It's a fascinating dance that they do," said City Councilman Mike Seekings, who was on the trip. "They manage the water coming across, keep the water out from the North Sea and make sure their land has enough water to survive so it doesn't subside."

"The Dutch don't choose one water-handling method over another. They do it all," City Planner Jacob Lindsey said. "They do permeable paving, rain gardens, green roofs. They do pumping. They do underground storage. They do surface water storage. They build dikes. They do everything. That's a totally different approach."

That said, the Netherlands and the Lowcountry have important differences. The Dutch don't expect more than a 9-foot surge from the worst North Sea storm, while Charleston could see double that in a worst-case hurricane hit. There, a 2-inch rainfall is a lot. Three years ago, parts of Charleston County saw 25 inches.

"Their storm drain inlets are one quarter the size of ours," Charleston Public Services Director Laura Cabiness said.

Also, Charleston is flanked by vast, natural areas, such as the ACE Basin, Francis Marion National Forest and Cape Romain National Wildlife Refuge. Even outside those areas, it's difficult to fill wetlands or build something that could harm an endangered species. In the Netherlands, no land remains untouched by man's hand.

One example of an innovative, recent project was the nation buying out dozens of farmers and homeowners to engineer their land to carry water from a nearby river when it overflows. It essentially is a dedicated flood zone.

"There were also some holdouts. You know what they did with the people who didn't want to move?" Lindsey said. "They built dikes around their houses."

Pulling out of the spiral

Tecklenburg has called flooding the city's No. 1 issue, one that will take decades and billions of dollars to address in full. The Army Corps of Engineers already has launched a $3 million study effort to improve the peninsula's protections from storm surge and rising seas. Separately, the city is doing its own vulnerability study.

Wilbert said the city will work soon to refine the questions that it will put before the Netherlands' experts when they return.

"As a group, we all agree that this (trip) was absolutely one of the best things we could have done for our city to get us thinking the way they're thinking about how we go forward in dealing with water issues," Wilbert said.

As he talked, a television flickered images of Hurricane Michael smacking the Florida panhandle. Days earlier, the United Nations Intergovernmental Panel on Climate Change issued what most consider its most dire report so far on the consequences of rising temperatures.

Winslow Hastie, CEO of the Historic Charleston Foundation, said what he got from the trip is how the Netherlands' flood management projects — since they were done in a way that also improves the quality of life — helped get the country out of a negative spiral.

"That's what we're in as a community. We're in very much a negative spiral about water and flooding," Hastie said. "They called it 'joint problem definition.'"

The city recently approved one small project with a dual purpose: An undersized pump station in West Ashley's Forest Acres neighborhood is being replaced with an open channel and box culverts, alongside an updated stretch of the West Ashley Bikeway.

Tecklenburg said the trip showed him that the ultimate answer to West Ashley's Church Creek flooding might not be an expensive pump system.

"We certainly want to push to the limit of creating more retention and storage and management," he said. "It may be possible for us to think in terms of a more natural combination to address the issues in the basin without having that expensive pump system."

"Don't get me wrong; we might end up spending as much money," he added, "but you'd end up with amenities, a series of Colonial Lakes that our citizens could enjoy. That's part of the mindset: always having a dual purpose."

A Dutch delegation could return later this year or early next year for a study that will take several months.

Tecklenburg said to get their stamp of approval — or recommendations for changes — on the city's flood projects and policies would help the city sell the projects to the public and build the necessary support for them.

"You see the excitement here in this room," Wilbert said. "How do you get the entire city of Charleston charged up and excited about, 'Wow, we really can make a difference. And we really can live with water, and there is a chance can save our city 50, 60, 70, 80 years from now.'"