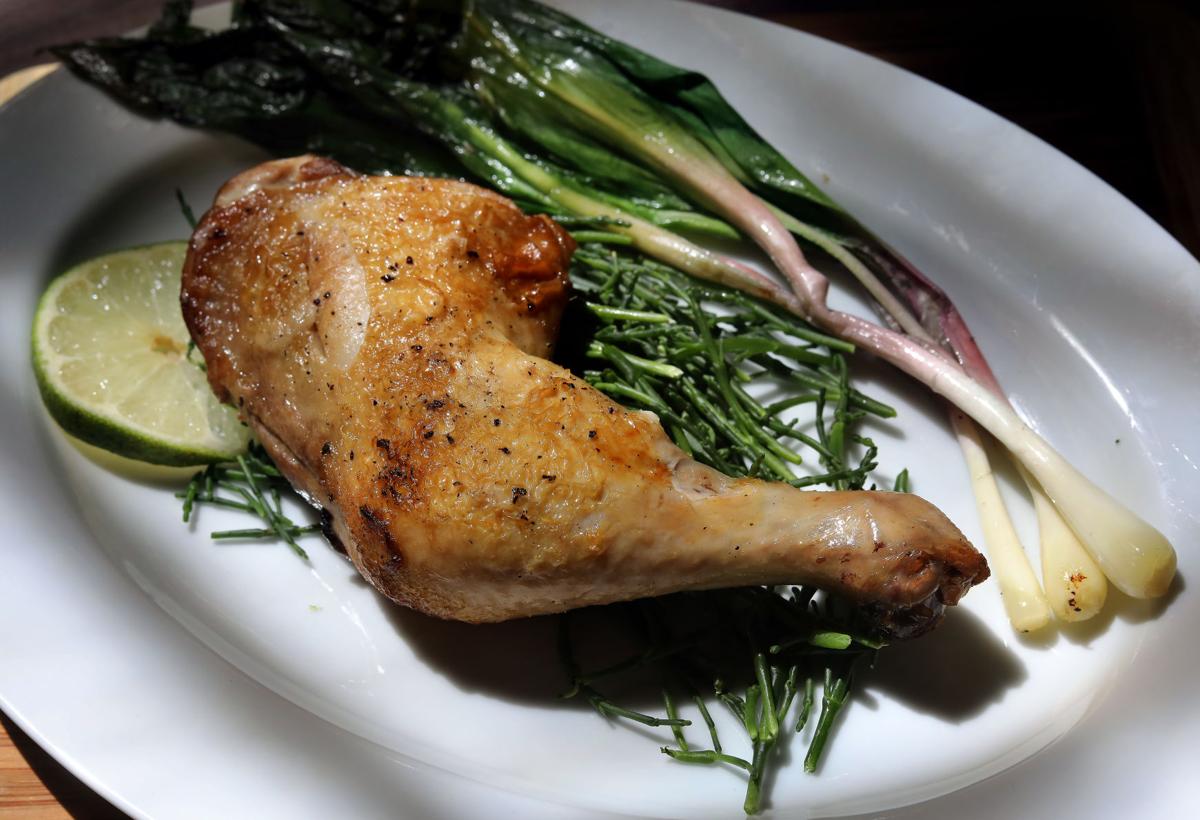 Jacques Chicken African Style with ramps and sea beans at Nathalie Dupree's on Wednesday, May 6, 2020, in Charleston. Grace Beahm Alford/Staff 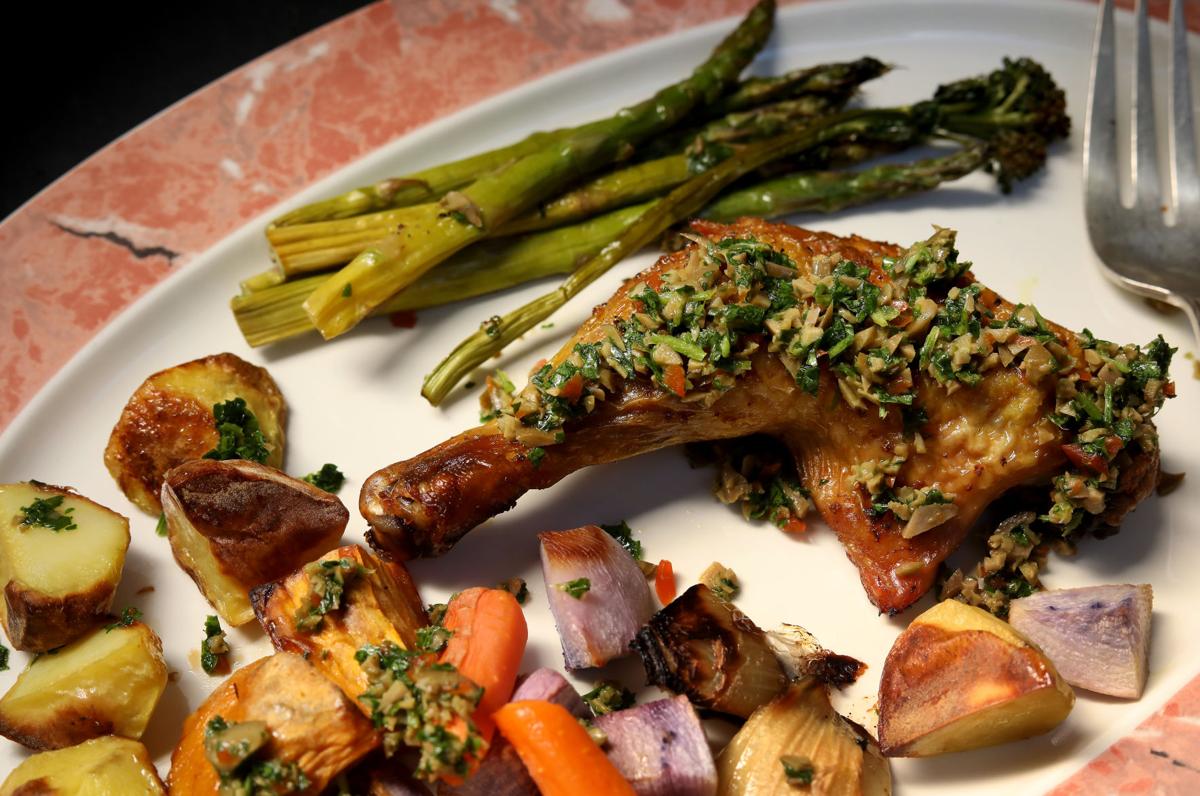 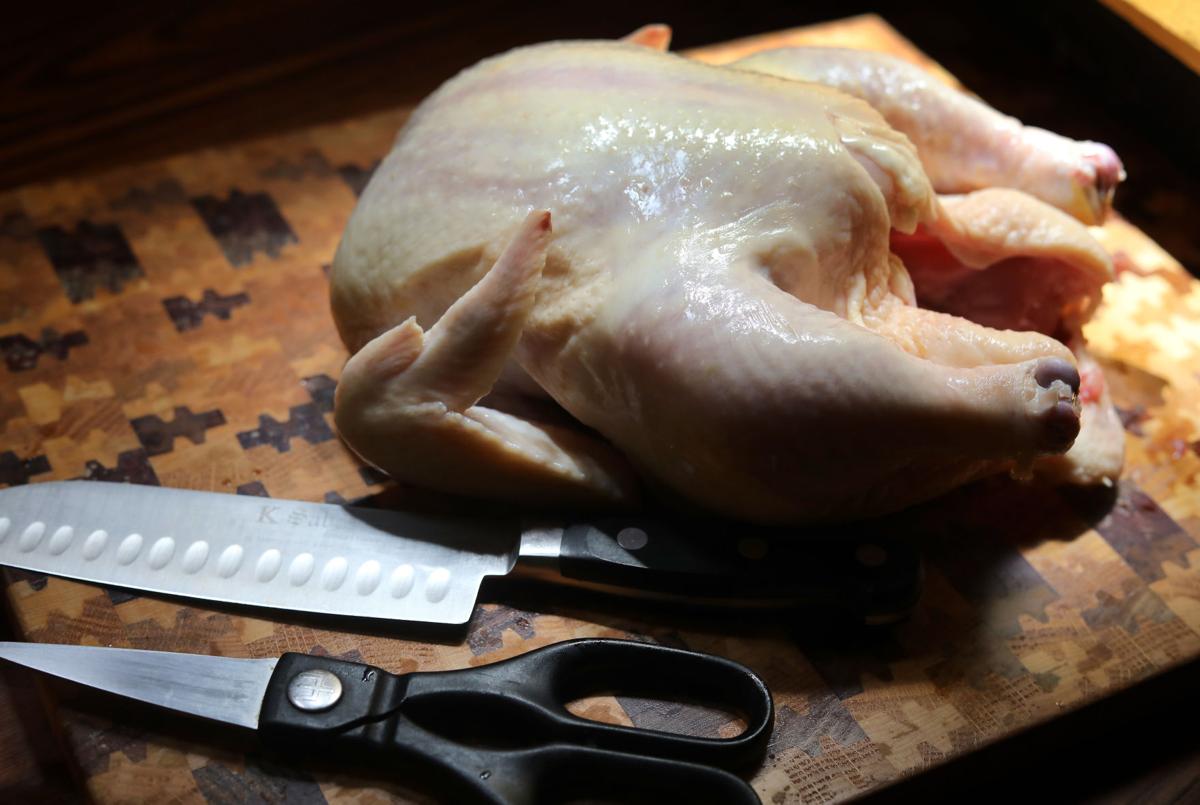 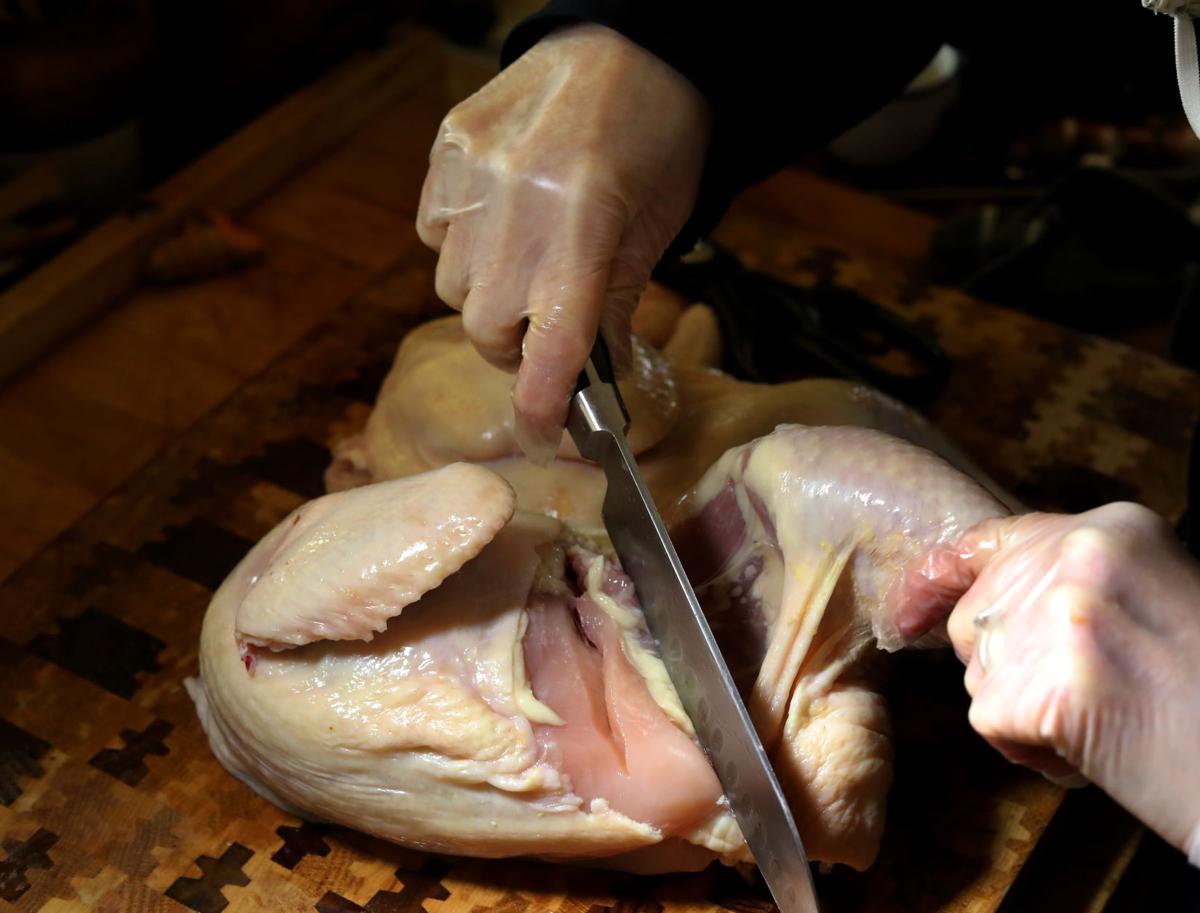 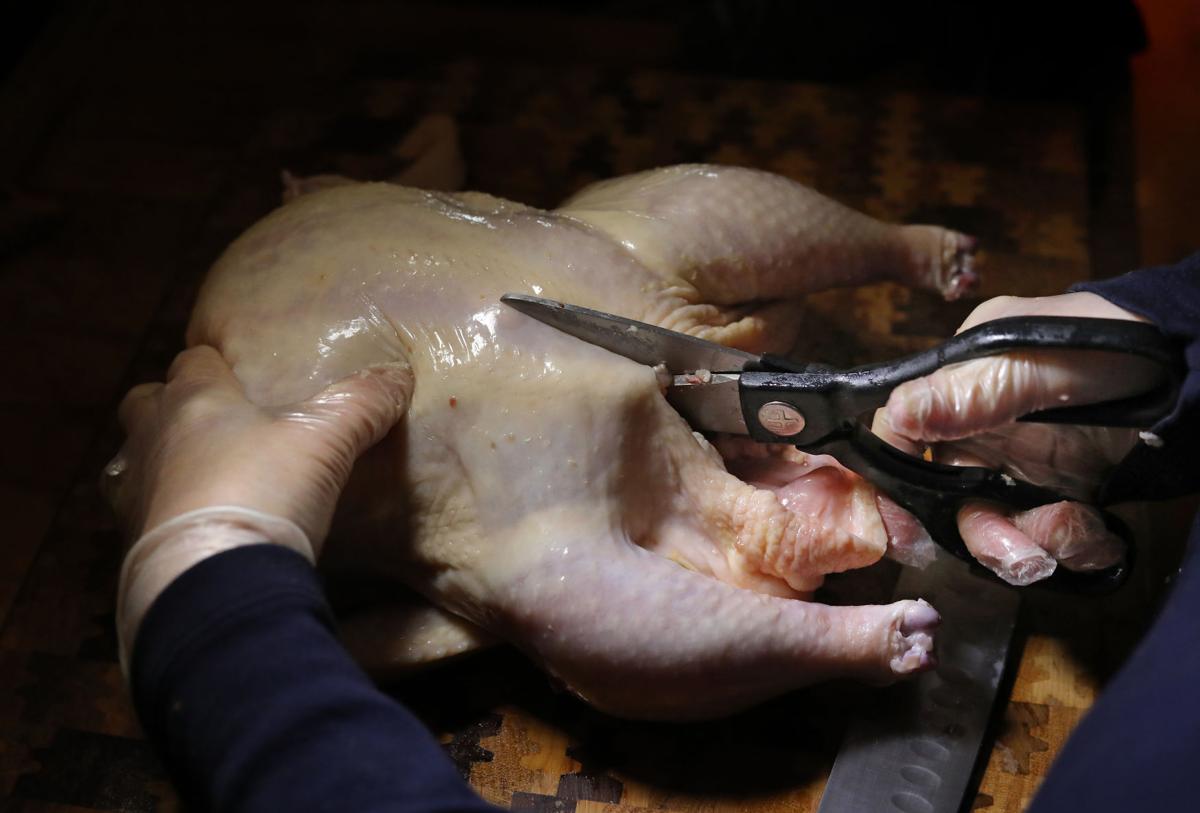 If you are feeling chicken insecurity, you aren’t alone. Chicken processing plants across the country have shut down in response to outbreaks of the coronavirus among employees. Although we have local farms that sell chickens and anticipate no local food shortages, chicken at the supermarket might come in different package configurations.

One possibility is that whole chickens will be more readily available, and packages of cut-up chickens less available. Since I’m a believer in cutting up one’s own chicken, this is a good opportunity to proselytize.

A whole chicken can be cut in half, or cut into four, six or eight pieces. It includes two each wings, drumsticks, thighs, breasts and one backbone.

It might startle you to learn that when “cut up chicken” is purchased from a large purveyor, the chicken parts in the package have never seen each other before. They are not from the same chicken, and not necessarily the same size.

In fact, a 3- or 4-pound package of cut up chicken will normally not include all the parts of one chicken, as the average chicken sold in a grocery store is rarely less than 5 pounds whole. It might only include a whole leg, including drumstick and thigh, from one chicken and the breast and wing from another.

An irritation to me is buying a package of four chicken breasts and finding three of different sizes: A very good reason to cut up a whole chicken.

It takes me about five minutes to cut up a whole chicken, and my friend Martin Yan can do it in less than a minute. Since I have small hands that have a bit of arthritis, novices will surely do as well with their first chicken.

It normally takes cutting up about seven chickens to feel totally fearless, just because people don’t do it much anymore. An already roasted or rotisserie chicken can be cut up the same way or can be carved into slices the way a Thanksgiving turkey is frequently served.

Get started by cleaning a board or other surface. Remove the chicken from the package in the sink to avoid spilling liquid on the counter. It will include the whole chicken, and possibly some parts, such as liver, kidney, giblets and neck. (Sometimes it will include multiples of one of these, reminding you that these parts are not from the whole chicken you are holding.)

Set these inside bits in a clean container and refrigerate while you are working. Do not rinse the chicken, as rinsing will spread any bacteria rather than get rid of it.

Pat the chicken off with a paper towel and put it chest up on the board or counter. A good pair of kitchen scissors is a worthwhile purchase, as is a good knife. Look at the skin of the chicken and find the yellow fat that corresponds to each bone. Cut up the fat, as there is no bone there. Snip off the two very end wing tips and save for stock.

Cut the chicken in half, starting by curing up the breastbone. This bone is a very tender bone and gives way very easily. The only hassle is the wishbone at the top center of the chest. Turn the chicken and cut up the backbone. (Some people prefer cutting up either side of the backbone and having the backbone as a separate piece.)

To cut into four pieces, hold the leg of one side of the chicken and cut the flesh between the thigh and the body of the chicken. The only bone to cut through is the hip bone. It will just snap by bending the leg back and yanking it, but it may need a little help from the knife.

The breasts of a 5-pound chicken are huge, so mentally make a deep “v” with the apex where the wishbone was and cut down on an angle on each breast to form the “v” so the bottom half of each breast is one piece and the wing has a nice piece of breast meat attached.

If whole breasts are preferred, snap the bones of the wings and cut the wings off at the joint bone. Leave the leg whole or cut the bone between the drumstick and thigh. Clean the board, knife and scissors and anything the raw chicken has touched very carefully. Use right away or package carefully and keep refrigerated, or freeze.

The recipes today call for cooking whole legs. It’s better to cook legs whole so the skin doesn’t shrink, and it makes a prettier presentation. One leg will feed two people. To separate into two pieces, look for the fat on the inside of the knee joint between drumstick and thigh and use that as a guide to avoiding the bone and snap just at the knee joint.

Chef Jacques Pepin and I have both had relatives who lived in Senegal, where I also once visited. So I particularly love his recipe for this chicken, which I’ve adapted from his book "Essential Pepin." He cuts up his own chickens and uses all the parts, but all dark meat, such as chicken legs or legs and thighs, can be used.

He serves his with couscous, mentioning that in Senegal it is served with “broken rice.” Here in Charleston, rice grits, made from broken bits of rice, are sold. That might be a typically Charleston meal. He removes the excess fat from the chicken thighs and uses them to brown the chicken so no extra fat is needed.

The recipe calls for a whole chicken, cut up. I cooked just a fresh chicken leg but have added the full recipe here. It calls for marinating the chicken which will tenderize as well as flavor it.

When ready to serve, remove the chicken from the marinade, reserving the marinade. Dry the pieces of chicken with paper towel, remove the small bits of yellow fat from the thigh and, if necessary, cut into small pieces.

Melt the chicken fat in a large heavy saucepan. Add the dry chicken pieces, skin side down, in one layer without overlapping, and brown quickly, turning once. Remove the pieces of browned chicken and put into a medium Dutch oven or heavy pot with a lid.

Simmer 25 minutes until chicken is cooked to 165-170 degrees. Remove the lid and move chicken to a hot platter; if the sauce needs thickening, boil just a few minutes. Serve hot with broken rice, rice or couscous.

Fix chicken and cheese for company, then freeze what remains for a cozy late winter supper

A suggestion for accompanying greens: Ramps

I’ve never cooked or eaten these little wild Appalachian bulbs or their accompanying greens before. I have eaten older ones, that are somewhere between garlics, leeks and onions in flavor, tending more toward the garlic when raw in salads. I didn’t like them, so was pleasantly surprised when my community-supported garden offered these.

Smaller than scallions, these were tasty and welcoming. I turned to Leith’s Culinaria and found an article suggesting they be cooked quickly in butter in a frying pan, first the stems and bulbs, with the leaves resting on the edge of the pan, then the leaves sautéed quickly. It took less than five minutes to cook the whole bunch.

These have made a recent appearance in local markets. My first introduction to these sea succulents was in London a few years ago, when a friend cooked them quickly and served them with fresh Scottish salmon, calling them Samphires. I’ve been waiting and longing to see them again.

They grow wild along both our coasts as well as along the coasts in England and other coasts. They have a welcoming salty flavor, are rich in protein and love seafood but made a very tasty bed for Jacques African Chicken. They can be eaten raw and cooked a variety of ways, I’m told, but I just sautéed them quickly in butter and tucked them under the chicken leg.

Look for them as they are in season and you will find them intensely memorable. They have many other names and a long rich heritage deserving of more attention.

Vinegar Chicken with Olive and Parsley

Adapted from a recipe by Alison Roman which calls for 3 pounds of chicken, I am suggesting two whole chicken legs or four thighs to feed four people; three whole chicken legs or six thighs for six people. Rather than separate the leg and the thigh, roast whole and then cut at the joint before serving for a prettier presentation.

Roman used green Castelvetrano olives, which she describes as briny olives, but I used the olives sold by our local company Olinda Olives & Olive Oil, which pack more punch. Their brine is so good I know people who use it in the drinks, from Bloody Marys to martinis. If pimento-stuffed olives are all that is available, remove the pimentos and reserve for another recipe.

Preheat oven to 450 degrees Fahrenheit. Pat the chicken parts dry and move, skin side up, to a rimmed baking sheet, with no overlapping.

Mix the turmeric and 2-3 tablespoons of the olive oil in a small bowl and brush or rub on the chicken parts. Season with salt and pepper. Pour the vinegar over the chicken. It’s OK if there is too much and a little runs off. If cooking vegetables as well and there is room on the baking sheet, they can be added as well.

Roast the chicken until the skin is brown and crispy, about 25 minutes. To ensure it is cooked, the meat should be at least 165 degrees when an instant-read thermometer is inserted in the flesh. The temperature will rise 5 degrees in the time it sits.

Meanwhile, mix the olives, remaining olive oil, garlic cloves, and parsley. Add two or three tablespoons water. If further chopping is needed, chop by hand or in a food processor. Taste and season with more pepper if desired.

Remove the chicken and vegetables, if any, to a warm platter. Quickly add the olive mixture to the hot pan with any drippings and juices still in the pan. Stir vigorously with a stiff rubber spatula or wooden spoon until all the goodness left in the pan is added to the olive mixture.

Cut the chicken leg at the joint if not already done to make two pieces. Spoon the olive mixture over the chicken.

Peel a variety of root vegetables, such as onion, potatoes, sweet potatoes, turnips or rutabagas. Cut into roughly the same size pieces. Toss with olive oil, salt and freshly ground pepper. Move to the same pan or a separate pan in one layer and roast until cooked through, approximately 25 minutes.

Another suggestion for accompanying roasted vegetables: Asparagus or broccoli rabe

Roast asparagus or broccoli rabe. Cut off any rough stems of the vegetables. Toss with olive oil, salt and freshly ground pepper and spread out in one layer on the same pan or a separate pan, and roast until cooked through, 15 to 25 minutes.