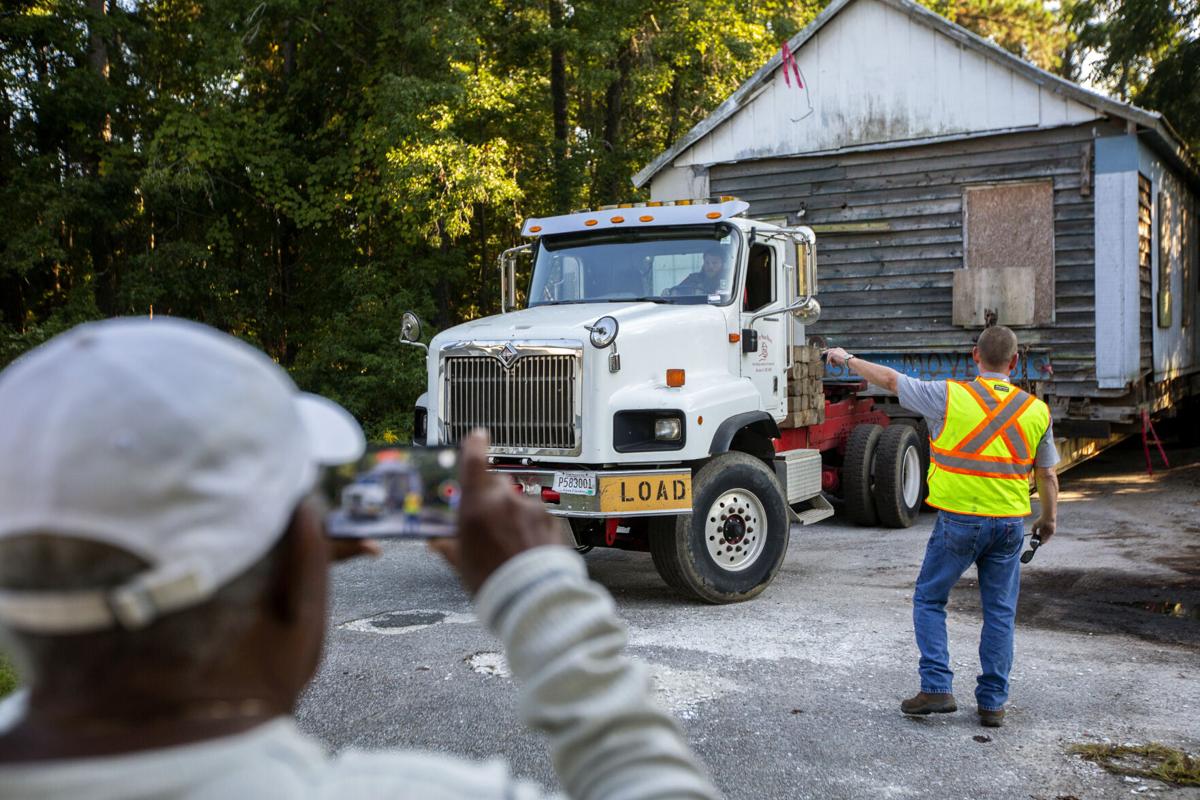 A crew works to take the historic Long Point School, built in 1904 for Black students, from Seacoast Parkway to a new location in the Snowden Community on Oct. 15, 2021, in Mount Pleasant. The African American Historic Settlement Commission relocated the school to a site it owns at 1578 Snowden Road. Gavin McIntyre/Staff 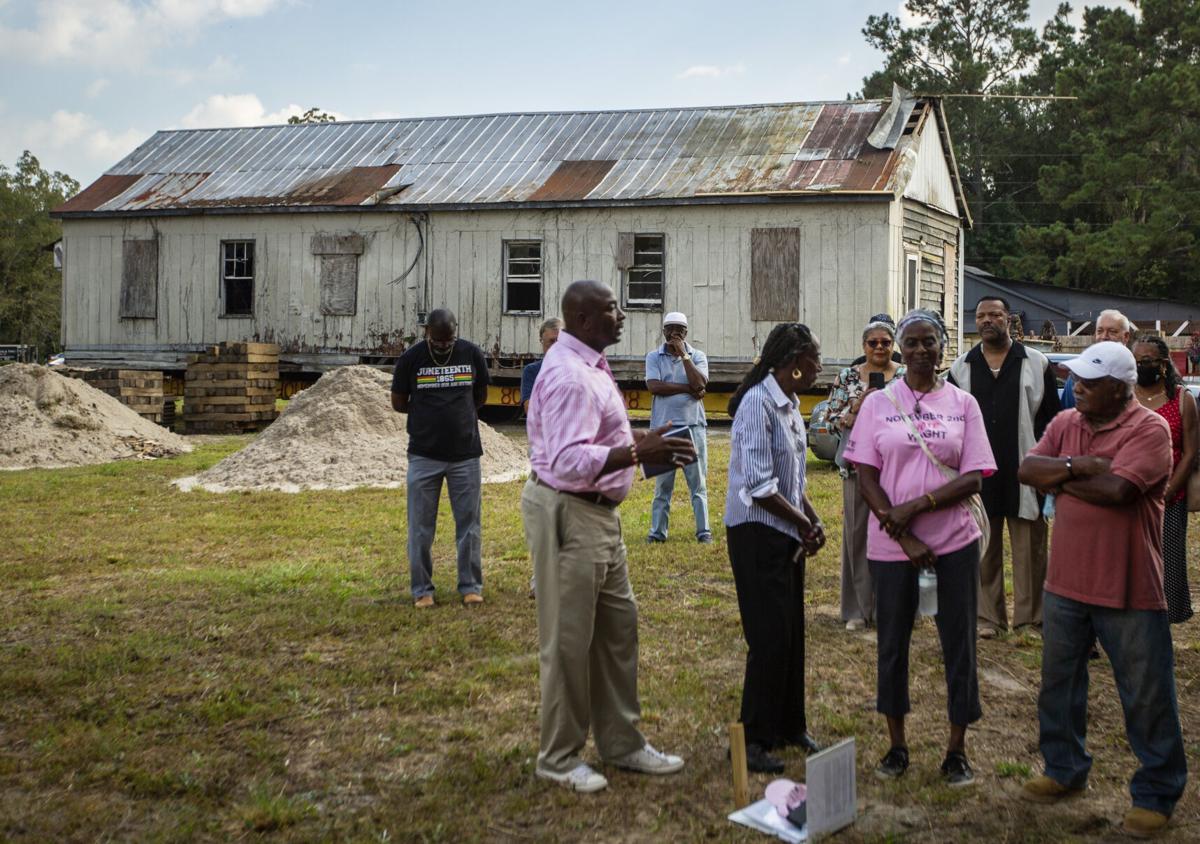 Members of the community gather in front of the historic Long Point School, built in 1904 for Black students, at its new location on Oct. 15, 2021, in Mount Pleasant. The African American Historic Settlement Commission relocated the school to a site it owns at 1578 Snowden Road. Gavin McIntyre/Staff 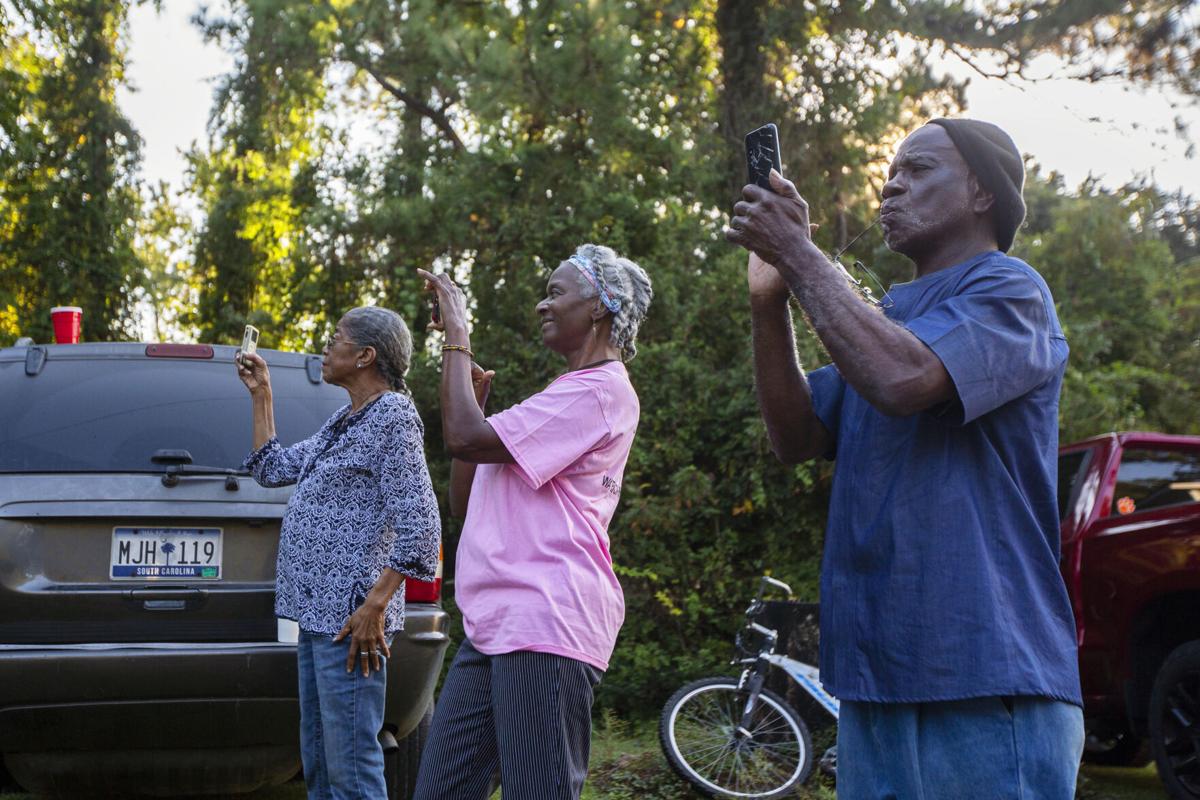 Deborah Holmes (left), Cheryll German and Joseph Palmer take photos of the historic Long Point School, built in 1904 for Black students, as it makes its journey from Seacoast Parkway to its new location in the community on Oct. 15, 2021, in Mount Pleasant. The African American Historic Settlement Commission relocated the school to a site it owns at 1578 Snowden Road. Gavin McIntyre/Staff 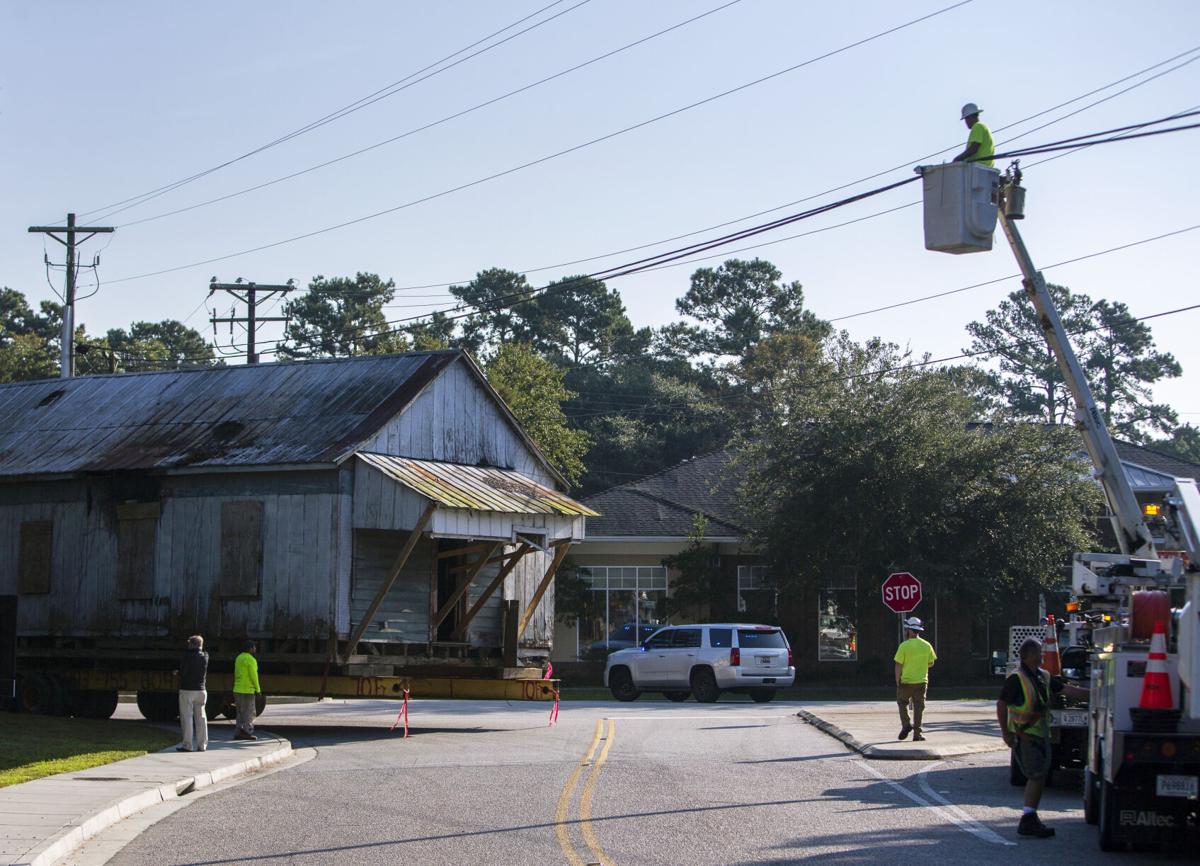 The historic Long Point School, built in 1904 for Black students, turns onto Belle Hall Parkway from Seacoast Parkway en route to a new location in the community on Oct. 15, 2021, in Mount Pleasant. The African American Historic Settlement Commission relocated the school to a site it owns at 1578 Snowden Road. Gavin McIntyre/Staff

MOUNT PLEASANT — African American history has often been overlooked, but steps are being taken to preserve an old schoolhouse that served Black students.

The Long Point School, Mount Pleasant's last standing African American school, was moved Oct. 15 to its new site at 1578 Snowden Road. The relocation to Snowden, a historic African American settlement community founded shortly after Reconstruction, is part of an effort to rehabilitate the century-old structure.

The African American Historic Settlement Commission has plans to refurbish the deteriorated building, which dates to 1904, into an educational and cultural center that could also serve as a community gathering space.

"This is big," said John Wright, president of the settlement commission. "We're nurturing this structure. It's a part of history."

Plans to relocate the two-room schoolhouse, previously situated off Seacoast Parkway, have been in the works for about four years. Things began taking shape in 2018 when the Snowden Community Civic Association voted to have the building moved to the Snowden neighborhood.

The association worked with the settlement commission to raise awareness of the site and, through individual and group donations, obtained the money needed to physically move the building.

The Holmes family, whose descendants first purchased the building in the early 1900s, donated the school to the settlement commission in 2019.

Doris Holmes Brunson said the structure brings to mind her parents, both of whom attended Long Point.

Efforts to relocate the building in 2020 fell through after organizers didn't obtain needed permits. There also had been disagreement between the commission and community residents over the proposed move.

The move began 9 a.m. Oct. 15 as a Carolina House Movers truck transported the wooden structure a mile to the Snowden Road site. The day's events concluded with a news conference attended by elected officials, members of the African American Historic Settlement Commission and the school's former students.

Mount Pleasant Mayor Will Hayne said the building embodies the themes of education, preservation and reconciliation.

"We have to remember why some of the students had to go to that school, and why they weren't allowed to go to another school," Haynie said.

Former Mount Pleasant Town Council member Thomasena Stokes-Marshall attended Long Point School in first grade prior to moving to New York, where she continued her education and launched her career before returning to the Lowcountry.

"The foundation that was laid here empowered me," she said.

"We'd recite the 'our Father' prayer and a Bible verse," Lawrence said.

The commission owns the land where the school rests. The group put down $10,000 in earnest money for the $100,000 property, Wright said.

The educational building was constructed to serve African American children in the historically Black Snowden community. The end goal of the preservation project is for the building to be a cultural education center that informs people, especially young students, about the school's history.

The settlement commission also wants the building to be looped into the historic tours of Boone Hall Plantation and Gardens and the Charles Pinckney National Historic Site, both nearby in Mount Pleasant.

What's unique are the ties that possibly exist between Boone Hall and Snowden, Wright said. He said he believes the Blacks who established Snowden had been formerly enslaved at Boone Hall.

The commission has also reached out to Historic Charleston Foundation and other local preservation groups, which have often overlooked the African American experience, said Michael Allen, longtime employee of the National Park Service and advocate of Gullah-Geechee culture and history.

The school preservation project falls within the larger, national trend of the work being done to preserve African American sites, Allen said.

These efforts have included other African American schoolhouses, such as Georgia's Harrington School, which the settlement commission used as a model for the Long Point school project.

"That may encourage other buildings, schools, and communities to step up and do the same thing," Allen said.

The historic Long Point Road Schoolhouse, built in 1904 to serve Black students, was relocated from its site on Seacoast Parkway to a new loca…