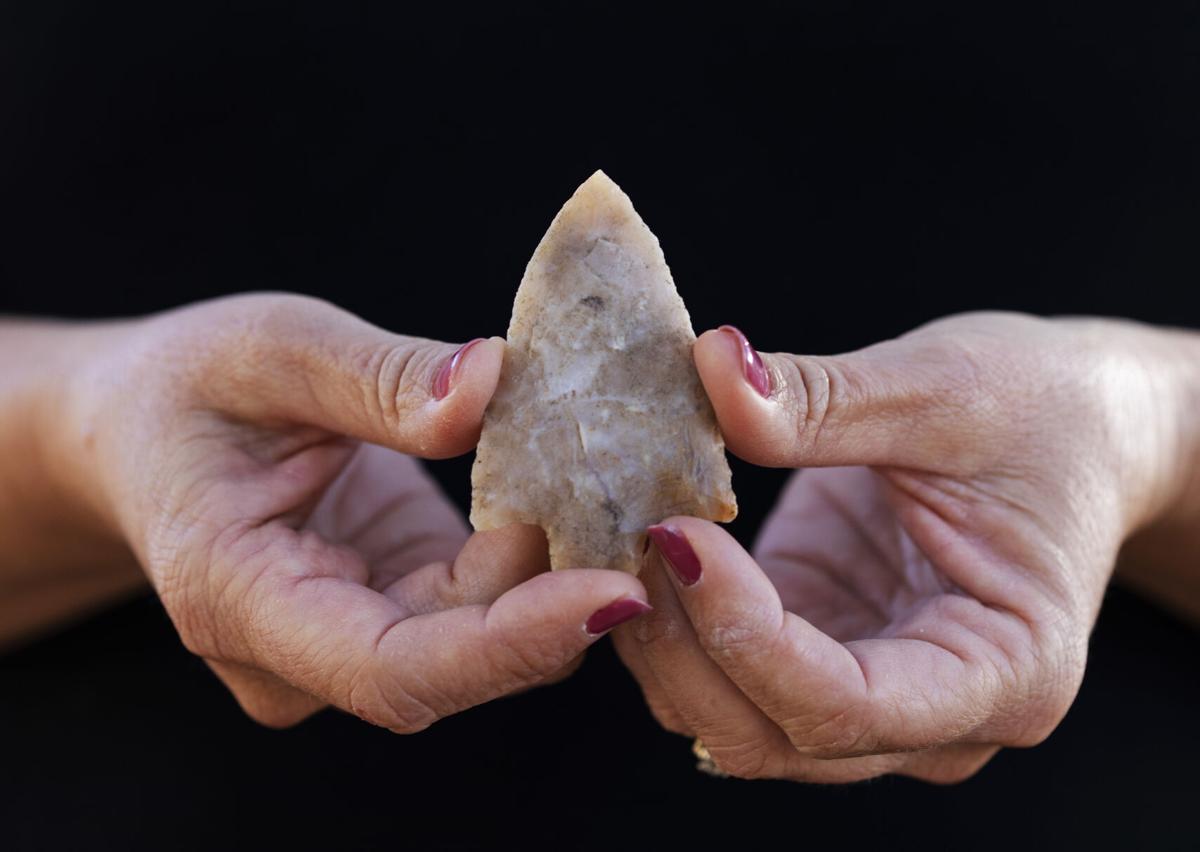 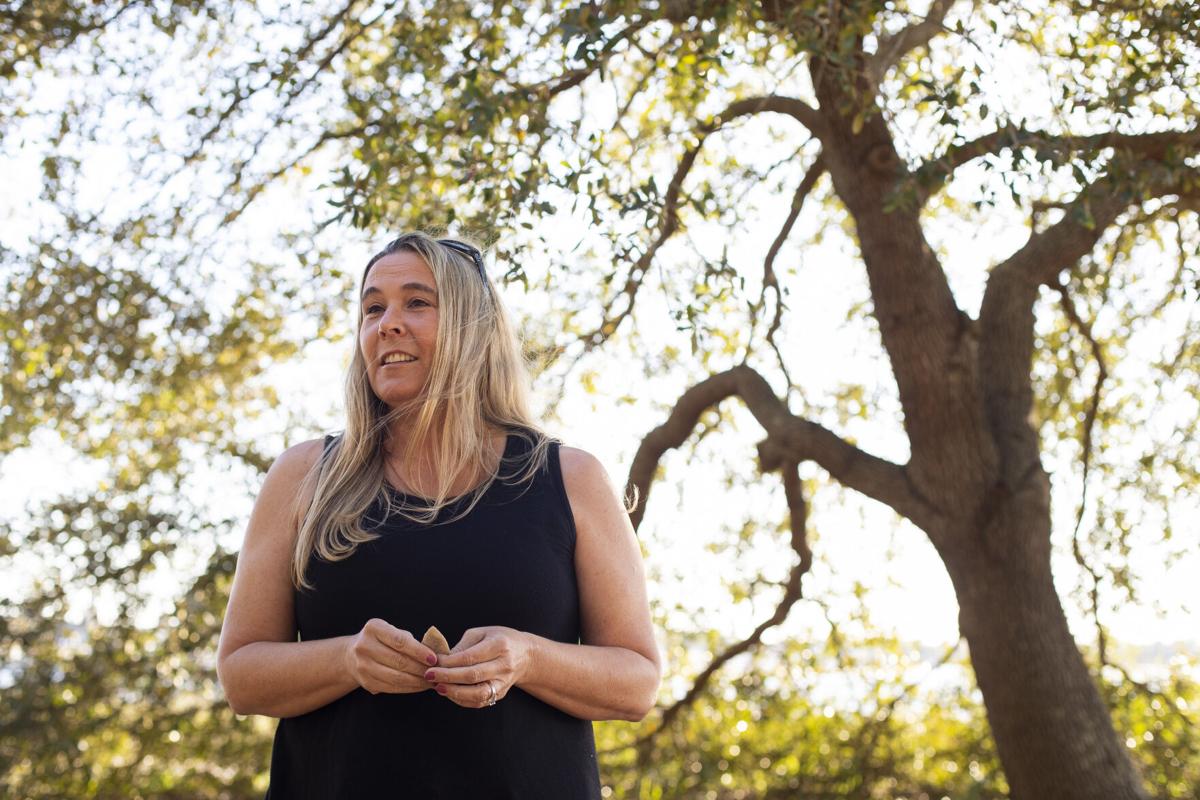 Bobbie Stasa tells the story of when she found a prehistoric stone blade made of agatized coral last summer near Yemassee. Lauren Petracca/Staff 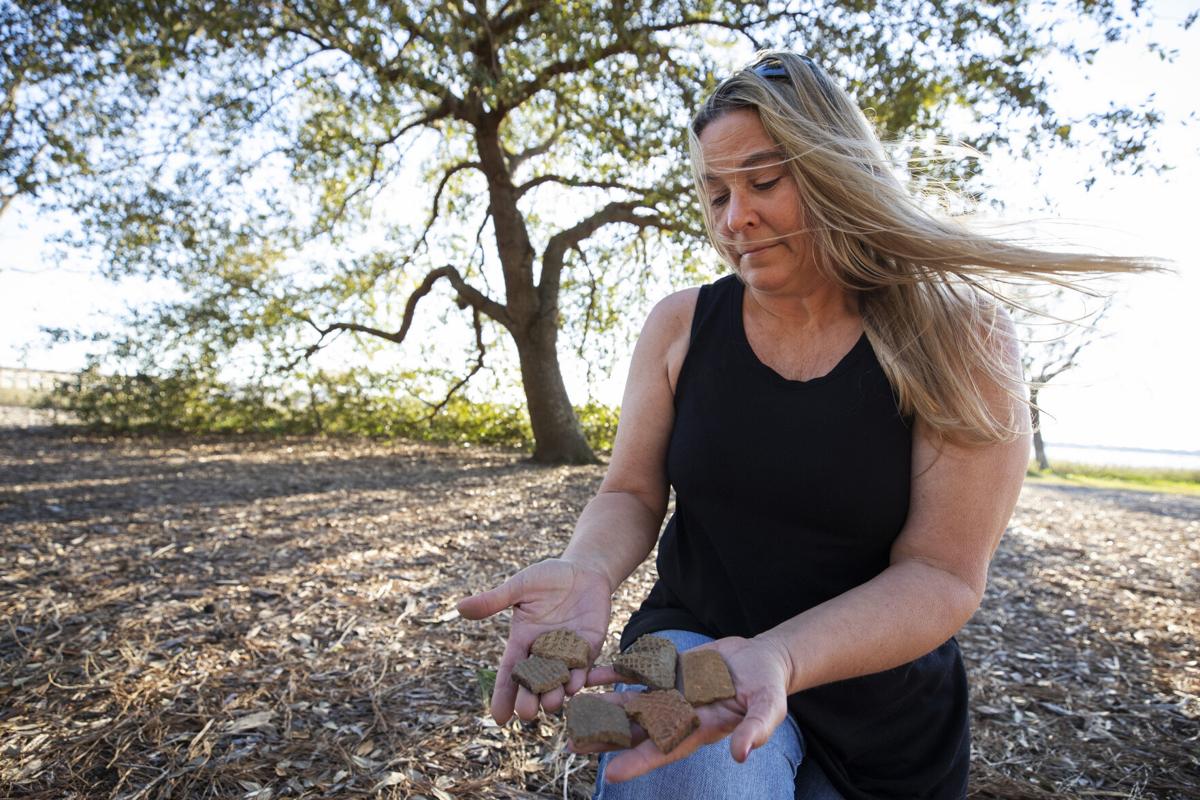 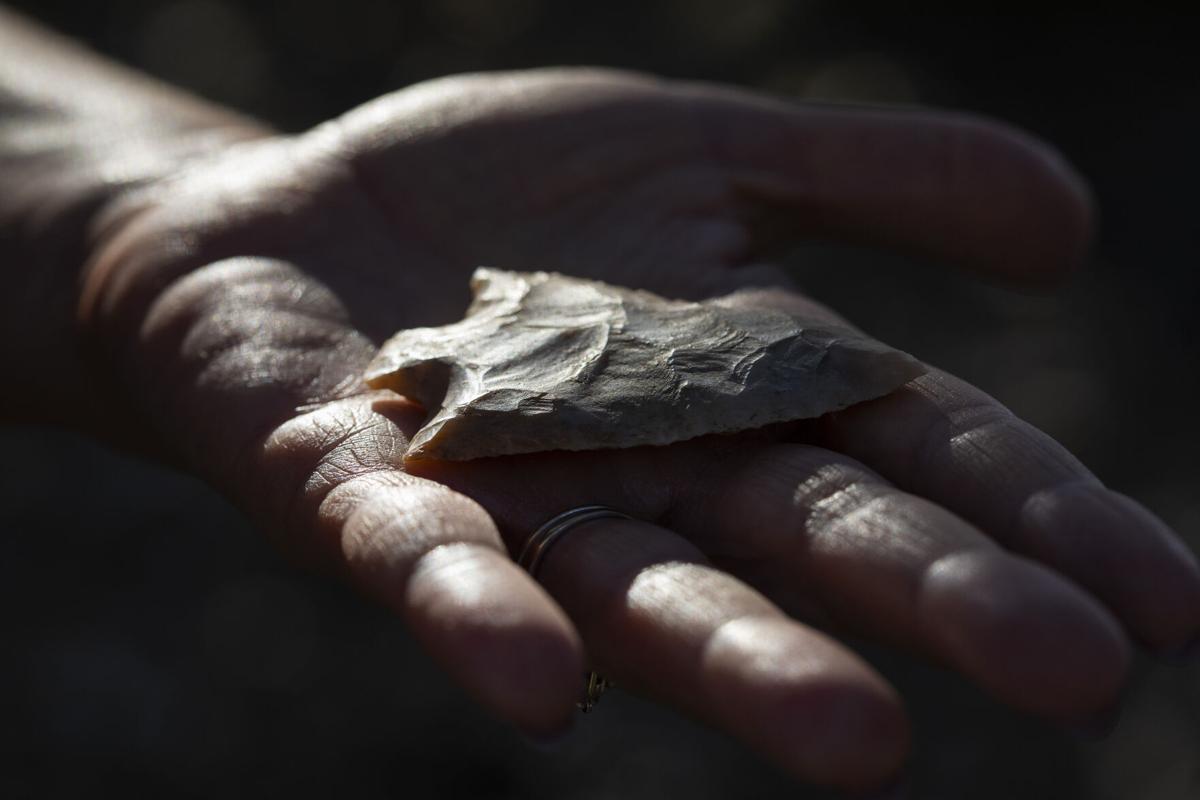 Bobbie Stasa holds a stone blade made of agatized coral that she found last summer near Yemassee. Lauren Petracca/Staff 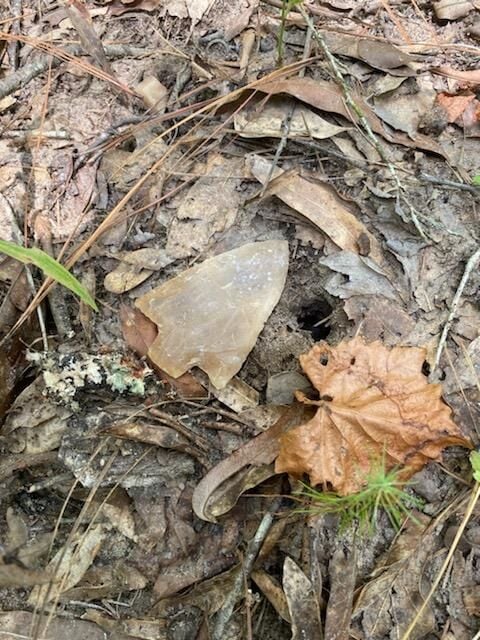 YEMASSEE — Avid metal detector Bobbie Stasa prospected for the better part of two days on a plot of mostly wooded land in southern South Carolina without any luck.

"I hadn't found a thing all weekend," Stasa said, thinking her fortunes wouldn't change with summer thunderstorms predicted for the next steamy day in August.

She was about to call it a day while walking on a dirt path not too far behind her husband, Brett, when she noticed an old brick beside the trail on a piece of property where they had been given permission to metal detect.

After kneeling for a better look, she glanced over to her left and saw an unusual object blending in with some browning leaves and natural ground cover.

"I couldn't believe my eyes," Stasa said. "Is that real? It looked like an arrowhead."

She picked it up, turned it over and marveled at what turned out to be a prehistoric find. Almost immediately, questions raced through her head: "What was it used for?" "Was it used for hunting?" "Was it part of how someone made a living a long time ago?"

Fascinated, Stasa sent a picture to a friend who forwarded it to an arrowhead enthusiast in Charleston. Amateur collector Darryl Beardsley rushed down U.S. Highway 17 to Yemassee to see it for himself.

"If she was finding stuff like that, I wanted to find something myself," the amateur collector said with a chuckle.

Once Beardsley saw it, he immediately said it was not an arrowhead.

"It's too big," he said. "It's about two inches long. Arrowheads are generally smaller than that, about one inch or so."

He believed it to be a stone most likely fashioned into a knife or a spear point and used by Native Americans eons ago.

"It's pretty incredible," Beardsley said. "You don't find a whole lot like that."

Stasa wanted more information about the discovery, so she reached out to a couple of specialists — one in Charleston and another at a magazine for metal detecting that aims to be a bridge between professional archaeologists and amateur historians.

Charleston Museum archaeologist Ron Anthony told The Post and Courier he believes her find dates to the Early Archaic Period around 6000 B.C. That would put it about 8,000 years old.

He said it looks most like a Kirk-style point, a name given to a group of triangular-looking stones possibly used as blades or darts.

"Kirk" is the name of a family who owned a farm in North Carolina where the objects were found and first categorized in 1964 by archaeologist Joffre Coe.

Kirk-type points are commonly found throughout the Eastern U.S., from the lower Great Lakes to north Florida.

Anthony said Native Americans are believed to have been nomadic hunters-gatherers during the Early Archaic period and traveled in groups of 30 to 40. They didn't stay in one place too long, so there is not a lot of debris fields from their seasonal camping sites.

"It's not unusual to find isolated remains of a projectile point and nothing else that could have gotten there for any other reason," Anthony said.

It's difficult to say exactly what Stasa's find was used for, but Anthony believes it was either a cutting tool attached to a handle at some point because of its stem at the base, or a dart point launched by a spear-thrower or atlatl.

He called it a cryptocrystalline, or microcystalline rock, with very fine granular structure that breaks in a  predictable way, something Native Americans would have found practical to fashion into hunting tools.

Native Americans could have used the point of a deer antler for pressure flaking of the stone and used the base of the antler as a mallet to strike off parts of the rock to form the blade, Anthony said.

He also said it is not an arrowhead and doesn't appear to be local.

Agreeing with Anthony is a columnist with a background in archaeology at American Digger magazine.

Pete Schichtel, a New Jersey furniture restorer, has a passion for Native American artifacts and a knowledge of the stone tool culture of North America, according to American Digger's biography of Schichtel.

After Stasa contacted the Georgia-based journal and the publisher reached out to Schichtel, he said the agatized coral-like stone Stasa found is rare in South Carolina and could have been traded into what is now the Palmetto State.

Schichtel said it's most likely a Hillsborough-type point, a name given to the objects from the area in north Florida where they are most commonly found.

But, he added, the exact type of point is "a little clouded" because Stasa's find has features of similar objects found in north Florida that date back roughly to the Early and Middle Archaic periods as well as the characteristic stem of a "Kirk" variety.

He also said it's possible the object started out for one use and, after resharpening over time, it took on qualities of another type of blade.

350 years ago, Charleston's first settlers carved a new colony in a pristine wilderness

How the object made its way to lower South Carolina is anyone's guess, but Beardsley noted earth had been removed from a nearby creek during the past few years and it's possible the object could have been dug up and the rain washed it to where Stasa found it.

"Nothing is wrapped up into a nice little package like most collectors and dealers want," Schichtel said. "It's really a gem though."

As an aside, Schichtel's past high-profile restoration projects include Woodrow Wilson’s pool table, Cole Porter’s piano and Gen. Douglas MacArthur’s desk, but he said a visitor is more likely to find grandma's sewing machine being restored.