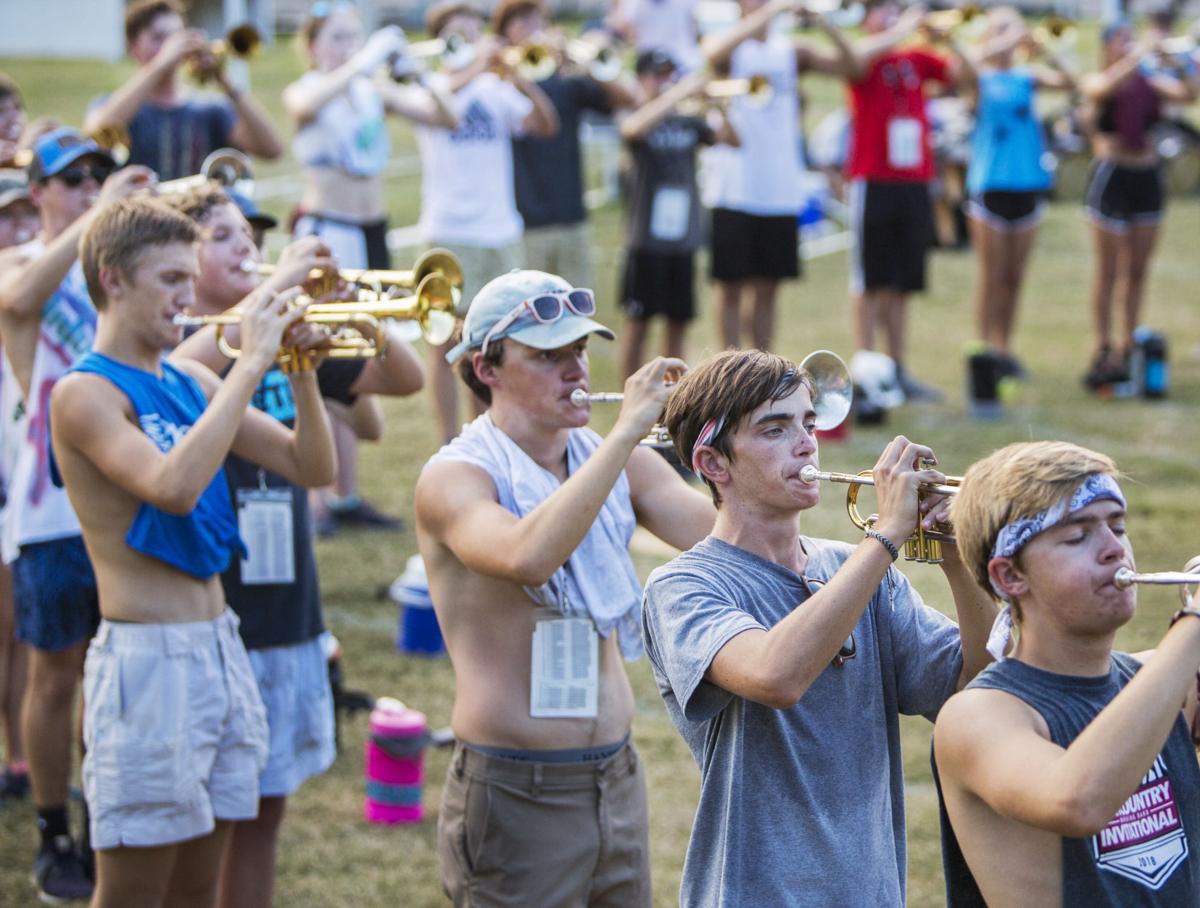 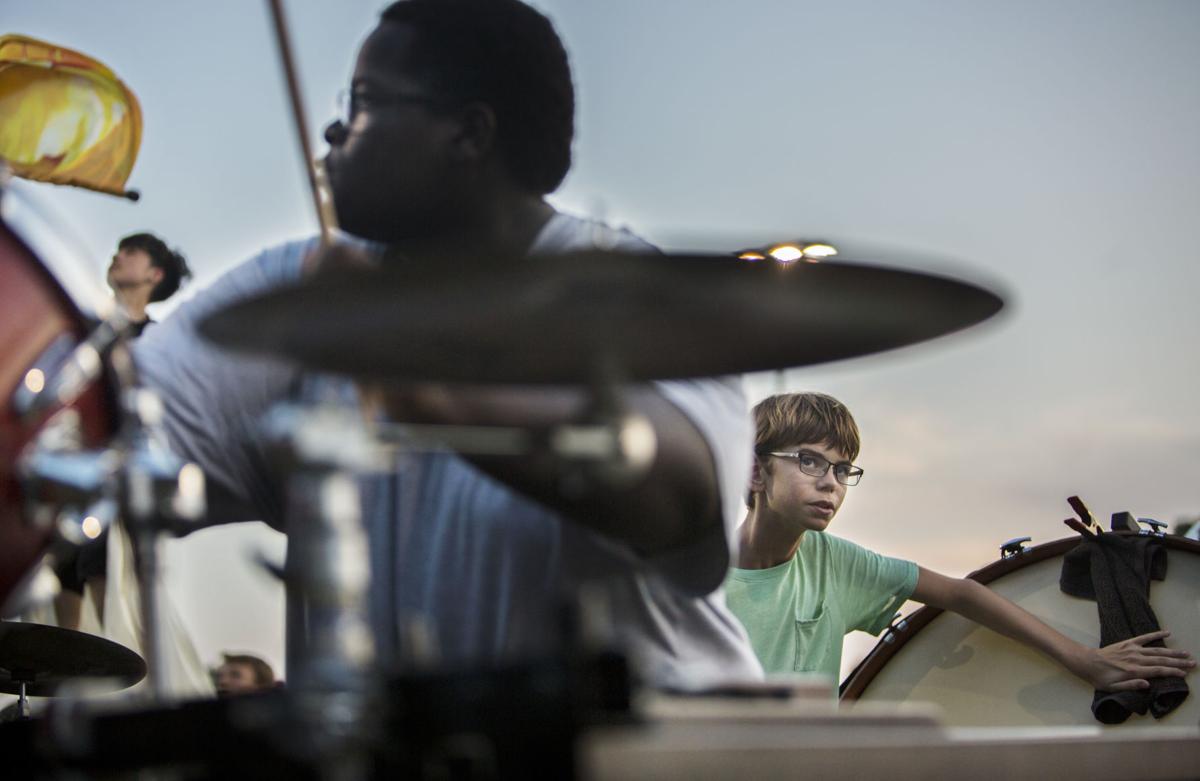 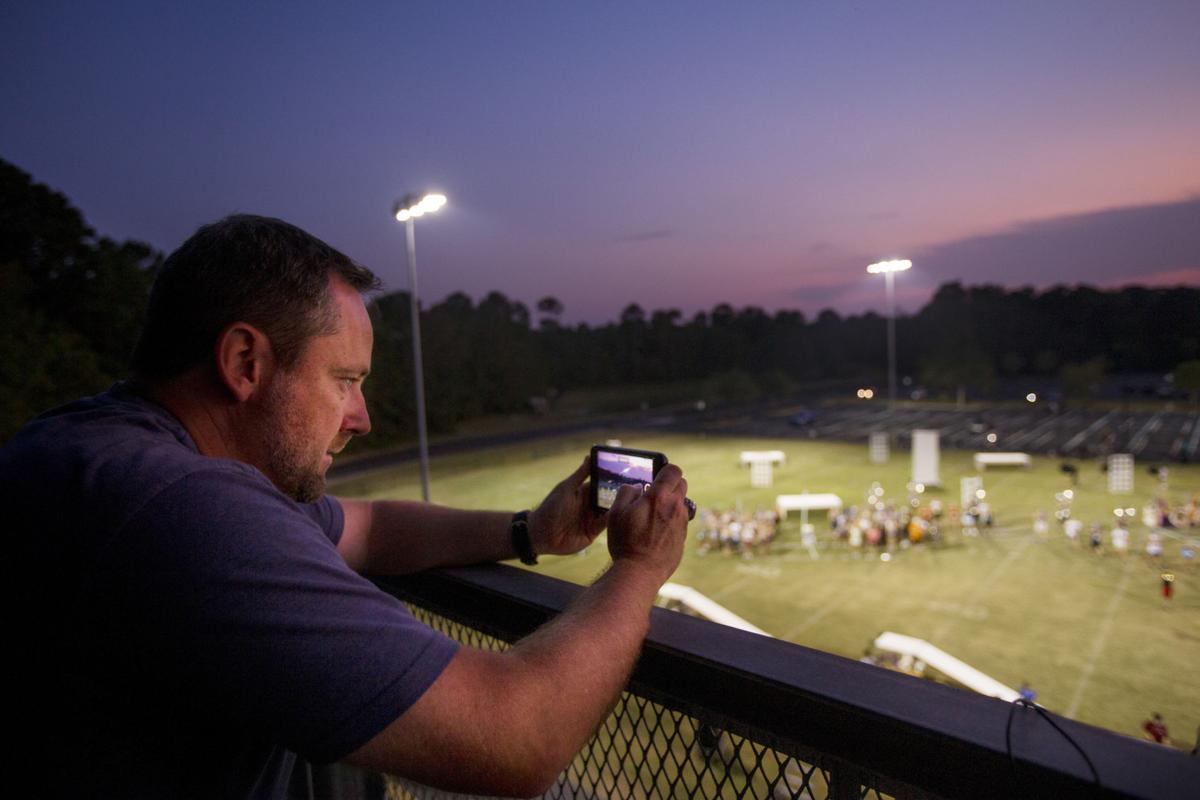 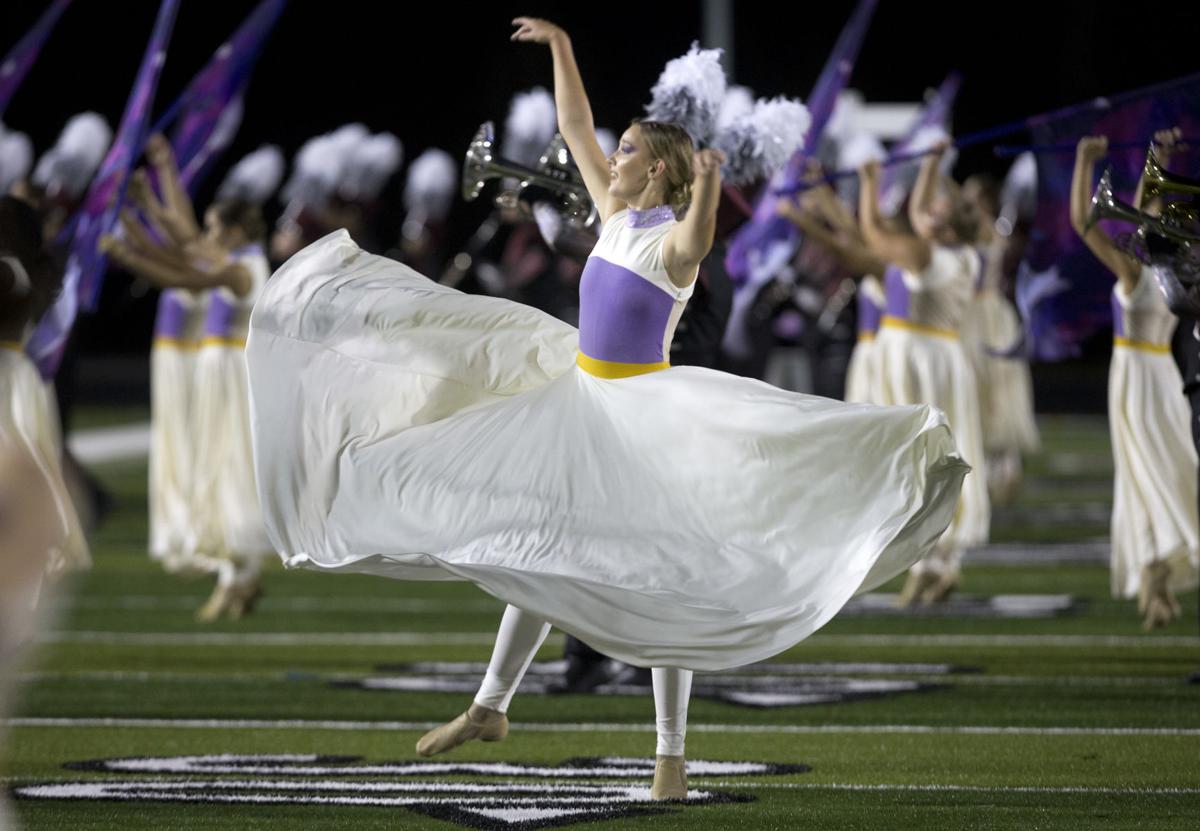 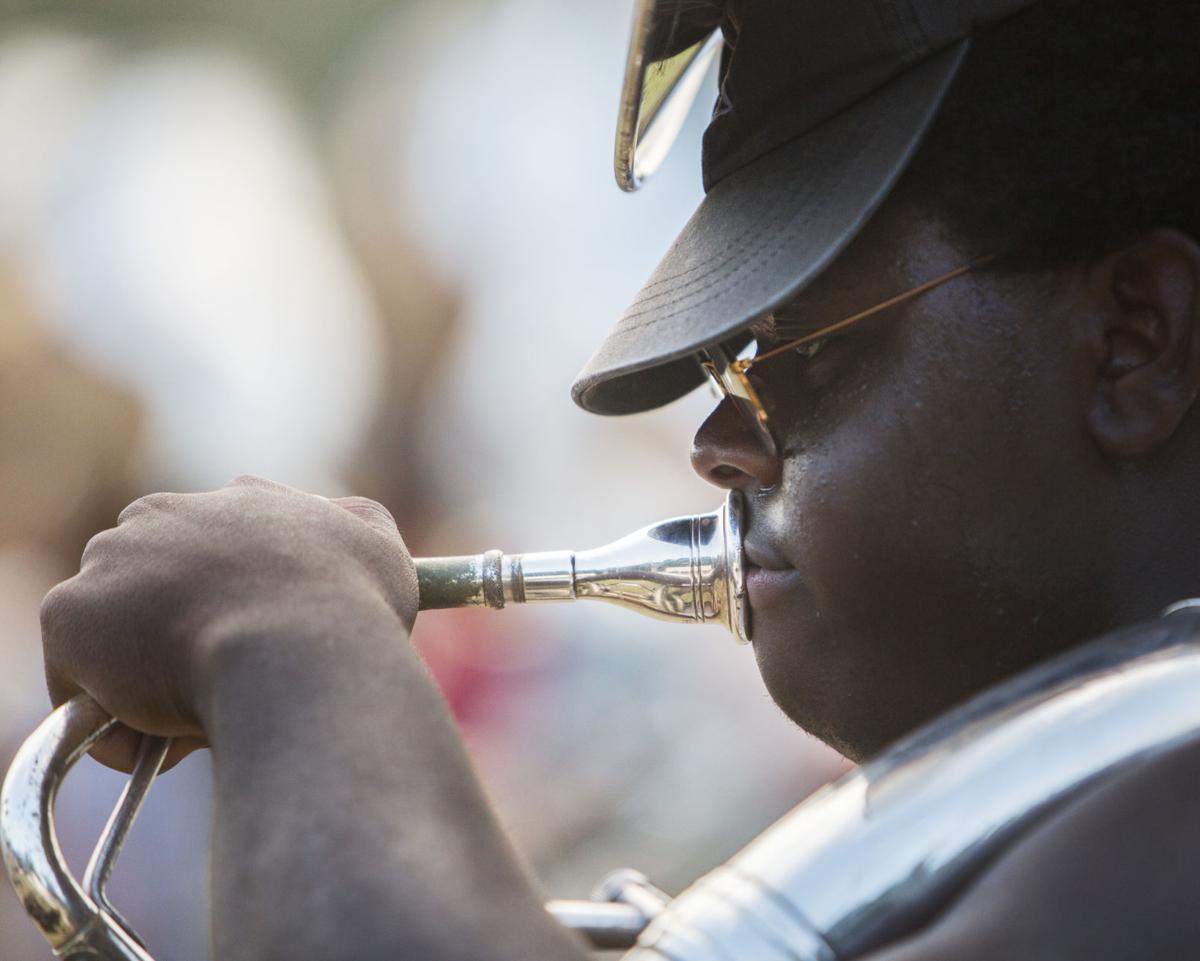 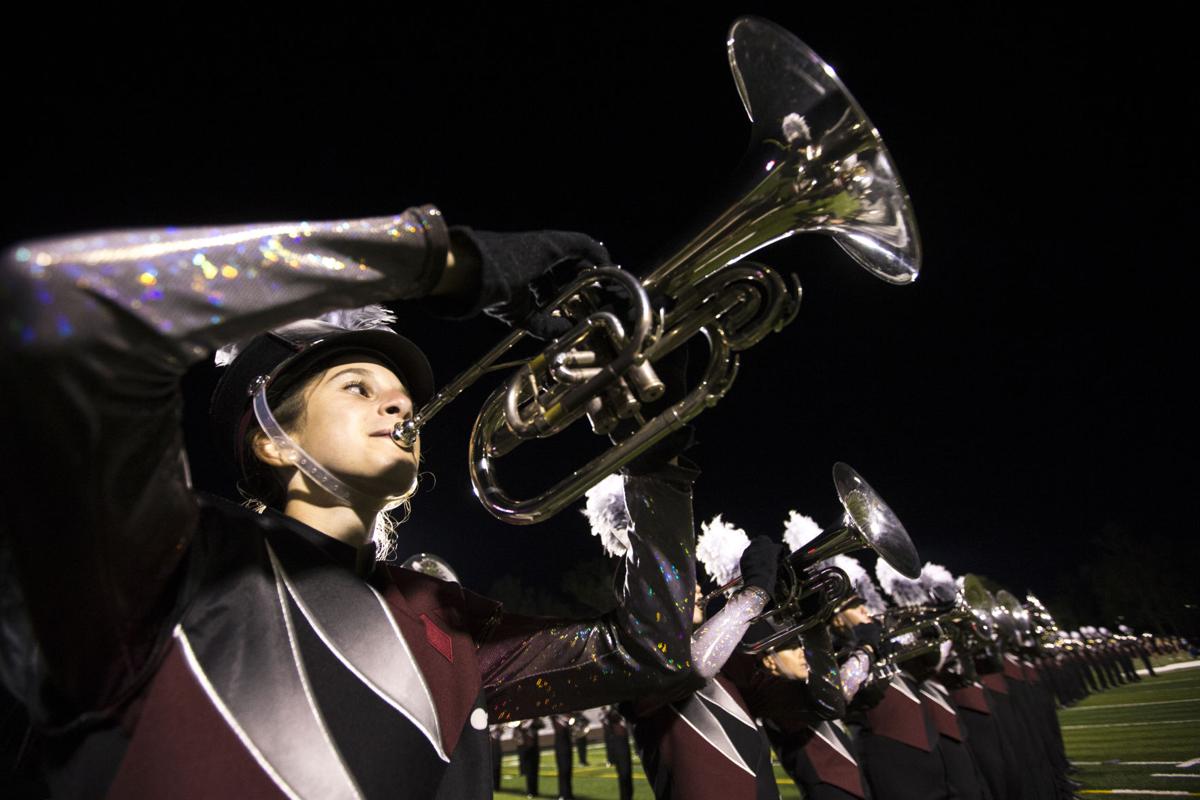 MOUNT PLEASANT — Wando High School’s band is nothing short of legendary here, a fiercely competitive program often recognized as one of the best in the United States.

But as a new high school opens soon and draws away 1,500 students from Wando, some parents are asking how the split will affect the school's prestigious band program.

“People flock to Wando to see how to run their band programs,” said Kendra Song, who has a freshman son who plays trombone and baritone in the Wando band.

In fact, the program has been so successful that it’s also recruited talented leaders from out of state. All three of Wando’s band directors moved to South Carolina specifically to be a part of the program, said Wando Band Director Bobby Lambert.

But change is on the horizon next year, in more ways than one.

Lucy Beckham High School, a 242,000-square-foot building being finished off Mathis Ferry Road, will open in August with about 800 ninth and 10th graders. This means some current Wando freshman have been rezoned to Beckham next year.

This shift has raised concerns from some of Wando's ninth grade band students worried about starting over with a brand-new band program at Beckham.

That’s the case for Joe Terry and his daughter, who plays clarinet in the Wando band.

While the idea of a new school is always exciting, Terry said his daughter desperately wants to stay at Wando, mostly because of its band.

“She loves it,” he said. “As parents, we’re just hopeful she’ll be able to stay.”

Song and her ninth grade son are in the same position.

“He wants to stay at Wando for marching band and jazz band and the music program,” she said. “I have younger kids, too, and we’re excited for the new school, but it’s just sort of like he’s been integrated into Wando’s training system, and we know its future and we know where it’s been.”

Ninth grade students will not be automatically grandfathered in at Wando. If they're zoned for Beckham, that's where they'll most likely go.

But students who want to go to Wando but are zoned for Beckham have an option: submitting a transfer request that is considered by the area's constituent board.

"I can’t tell you things that definitely will or won’t be approved," said Sarah Johnson, who chairs the District 2 Constituent School Board. "Parents can certainly make the request and make their case, but ultimately each request is decided on a case-by-case basis."

Her board gets as many as 300 transfer requests per year, she said, and the process is usually reserved for special circumstances or hardships.

But the transfer process offers no guarantees, and the window for applications happens in March. Johnson said her constituent board makes most transfer decisions in April. If a family's transfer request is denied, the family could appeal to the Charleston County School Board.

"I think everybody is hopeful that there’s not going to be an issue with the transfer process, but if for some reason there is, we’re not sure what we’d do," Terry said.

By the time they get an answer, there's not a lot of time to consider other options, such as moving to a house zoned for Wando, he said.

“My son was a trumpet in the Wando marching band. I get it,” she told a group of future Beckham students and parents at a meeting last month.

“We won’t be Wando High School band our first year out. Hopefully, we’ll be moving in a little bit of a different direction. What Wando does, we can’t replicate. So we want to become Beckham.”

The school will offer marching band and concert band, Dassing said. The plan is also to offer chorus and orchestra and maybe jazz band or drumline.

"I mean, the honest truth to that is we're going to just grow into it," Dassing said of Beckham's band program. "We don’t even have a band director yet."

The school will try to differentiate itself from the artistic-style band that Wando sometimes leans toward, she said, emphasizing that the goal of the school is to provide students with more opportunities, artistic or otherwise.

She expects around 60 students may be interested in joining Beckham’s band program next year.

Once the new high school reaches full capacity in 2022, Beckham’s three-story, $103.7 million building will eventually house 1,500 students who otherwise would have gone to Wando.

“Obviously we are going to be taking students, I mean students that are zoned currently at Wando will be zoned for Beckham, so there’s an adjustment there," Dassing said. “But we have a really strong relationship with Wando.”

After a year of debate, a plan emerges to divvy up SC's largest high school

Dassing and Lambert don’t anticipate that the new school will dramatically affect the enrollment of Wando's band, and neither expects its quality will be sacrificed. But anytime a new school is built it means change.

“I believe most of us are always sensitive when change occurs. Right now, we have an incredible music program that we want to see growing rather than shrinking,” Lambert said. “As the advocate of that program, I can promise that if I see things that will deter from the offerings we can provide students, I will be the first to jump.”

However, he added, after talking with district administration, he does not anticipate negative impacts for Wando's band.

“Is there a possibility that we would be smaller? Sure,” he said. But that’s a possibility every year, considering other options Mount Pleasant high school students have, including Academic Magnet High School, Oceanside Collegiate Academy or School of the Arts.

Recognizing this, the band will ask existing and future students to commit to next year's program sooner, so directors can plan the competitive season more effectively.

It also will be the first year that Wando’s band will be split into two branches. The first division will include all band students but will operate with a “very limited timetable" — likely one day a week and football games, Lambert said. The other branch will be the school's competitive marching band that will operate with a heavier schedule similar to its current one.

“I think it will be a relief for some people to know they don’t have to do the competitive side,” said E.C. Setser, the president of the Wando Band Booster.

During the marching band season, which typically runs from August through October, students often spend 20 to 25 hours a week practicing, competing or playing at football games, Setser said.

The time commitment that the band program requires from both students and parents has fostered a close-knit network of support.

“It’s an amazing world,” Setser said. “It’s a family. Those kids come together and do so many things, it’s just incredible what they can do.”

Setser isn’t worried about the new school disrupting that sense of family.

“I’ve seen the love of music in this community just rise and thrive. You fall in love with it."

And growth across Mount Pleasant hasn't showed many signs of slowing down.

“I think Wando is going to bounce right back. The more opportunities we can offer all of our kids, the better,” she said.

Earlier this month, Wando's marching band scored its 12th state championship title — a record-breaking win. Two weeks before that, the marching band placed third out of 22 bands that participated in the Bands of America Regionals. Next month, Wando's Symphonic Band will perform at the biggest instrumental music education conference in the world.

"The only thing we cannot do is compromise our program," Lambert said. "With the 6th place marching band in the country and a top 10 concert band performing in Chicago this year at a national convention, we cannot simply become a 'fun' or non-competitive group with the talent we possess."

Beckham will open its doors in August, complete with two gymnasiums, a performing arts center, collaborative learning areas and an art media center.

"We realize the talent and the leadership that we have in this community that is supportive of the arts and arts education for our children, and we're going to make sure that we have that for our students," Dassing said. "Wando’s older, they're bigger than us, but we're going to be coming up right behind them."