The State Law Enforcement Division is investigating the 2019 death of a man who was in the custody of Mount Pleasant police.

Tommy Crosby, a SLED spokesman, said police reached out to the state agency and requested an investigation into the Oct. 16 death of James C. Britt, 50.

"The investigation does include, but is not limited to, the Mount Pleasant PD," Crosby said. "Specifics of the investigation are not available as this is an open and active case."

Britt died about 2½ weeks after he was arrested by officers who were called to a report of a man urinating in a roadway, according to an incident report and an autopsy report provided to The Post and Courier.

The situation escalated. Britt struggled with officers, who brought him to the ground.

"Due to the continuing combativeness, (emergency medical services were) called and administered 500 mg of ketamine intramuscularly into the right shoulder," the autopsy report said. "The decedent was face down with pressure on his back, head and neck for approximately 15 minutes before the administration of ketamine and for another 3-4 minutes after administration, at which point he became unresponsive."

Ketamine is an anesthetic that's commonly used in human and veterinary medicine. It is also used as an illicit drug.

Its use in prehospital settings, like ambulances, has not been deeply studied, but the drug has shown promise as a treatment for depression and post-traumatic stress disorder.

Britt's heart stopped in the ambulance, reports said. Paramedics were able to get it beating again, but he never regained consciousness.

After about a week, Britt was transferred from East Cooper Medical Center to Medical University Hospital, where he was pronounced dead.

His death was ruled a homicide, according to the autopsy report. His main causes of death were listed as "restraint asphyxia and toxic effects of ketamine."

In the report, a pathologist noted a lack of oxygen to the brain when Britt was admitted to the hospital.

Britt's condition showed no improvement after about 2½ weeks in the hospital, the report said. A urine test did show presence of THC, the component in marijuana that causes the high.

After completing the autopsy, the medical examiner noted Britt had signs of heart disease, was obese and had a blood-alcohol concentration upon admission to the hospital of 0.274 percent, more than three times the 0.08 percent level at which a person is presumed to be intoxicated.

Mount Pleasant police incident and supplemental reports lay out what happened as officers arrived at the scene on Sept. 30 and Britt got more and more agitated.

The first officer was called at 7:11 p.m. to a report of a man urinating in public near a car with a flat tire at Snee Farm Parkway and northbound U.S. Highway 17.

Britt was wearing khaki shorts and didn't have a shirt on. He was covered in sweat.

The officer asked if he needed help and offered to call a tow truck. She also noted that she "smelled the odor of intoxicants on his person."

The officer asked for backup and continued to try to help Britt. When the second officer arrived, the situation escalated. Britt started swearing at the officers. A sergeant was asked to come to the scene.

"Britt asked if I knew how to do a 'Body control.' I asked what he meant and he finally asked how we could tell if the car was ruined or not," the first officer wrote in her report. "Britt said the 'Tire blew out and I pull in here and that was it.' Britt said the tire blew out on 17 highway. He said, 'You act like that tire was going 100 mph but it wasn't.'"

The sergeant arrived and tried talking to Britt and tried to conduct a field sobriety test, which he refused.

"I determined the subject was going to be placed under arrest for public intoxication due to the totality of the circumstances to include: being reported as (sic) a citizen as intoxicated, being reported as intoxicated by another officer, slurred speech, inconsistent answering to questioning, inability to pay attention, stain consistent with urine on his pants, and refusal to comply with testing for the presence of intoxicants," the sergeant wrote in a supplemental report.

Soon, there was a struggle.

Britt grabbed the sergeant's uniform as the three officers tried to control him and put handcuffs on. At some point, Britt fell to the ground and the officers eventually rolled him over onto his stomach.

More officers were called. Britt tried to bite one of the officers.

After handcuffs were on, officers put pressure on his shoulders and controlled his neck, and one stood on the chain connected to leg shackles that were also placed on the suspect.

He continued to struggle and curse at officers.

"Britt told me. 'I can't wait to see you, (expletive) with your kids," an officer wrote in her report.

After paramedics arrived and dosed him with ketamine, several officers noted in their reports that his condition deteriorated as he was prepared for transport to East Cooper Medical Center.

The sergeant suffered a thumb injury during the struggle, reports said.

Detailed information about SLED's investigation was not available.

Drew Butler, an attorney representing the town of Mount Pleasant and its police officers, provided a statement from town officials to The Post and Courier.

Britt refused officers' attempts to deescalate the situation and their offers of help, according to the statement.

"Once it was apparent that Mr. Britt was not going to cooperate with officers, the decision was made to take him into custody at which time he became extremely combative," according to the statement. "Numerous officers were needed to gain control of Mr. Britt and to get him into custody. Even after being handcuffed, officers continued to struggle with Mr. Britt, who remained combative and continued to verbally threaten officers on-scene."

They tried multiple times to get Britt into a seated position but were met with resistance, according to the statement. Paramedics were called because Britt's actions caused injury to himself and officers.

"Once the seriousness of Mr. Britt’s medical condition was known, Mount Pleasant Police Chief (Carl) Ritchie made the decision to have SLED conduct a review of the case," according to the statement. "As a result of the coroner’s determination of the manner of death, the officers involved in the arrest of Mr. Britt were removed from their line of duty assignment and placed on administrative duties pending the outcome of an internal investigation, which ultimately found no violations of departmental policy."

Another attorney, Mullens McLeod, confirmed he has been retained to represent Britt's estate and is preparing to file a wrongful death lawsuit.

Britt's family could not be reached to comment for this article.

It is not known how many Mount Pleasant police officers are the subject of SLED's investigation, or which other agencies SLED agents are looking into for the probe.

According to Charleston County EMS standing orders for ketamine use, the drug is to be administered when a patient shows signs of paranoia, disorientation, is extremely aggressive or violent, is suffering hallucinations, and is "clearly a danger to self or others," among other points. 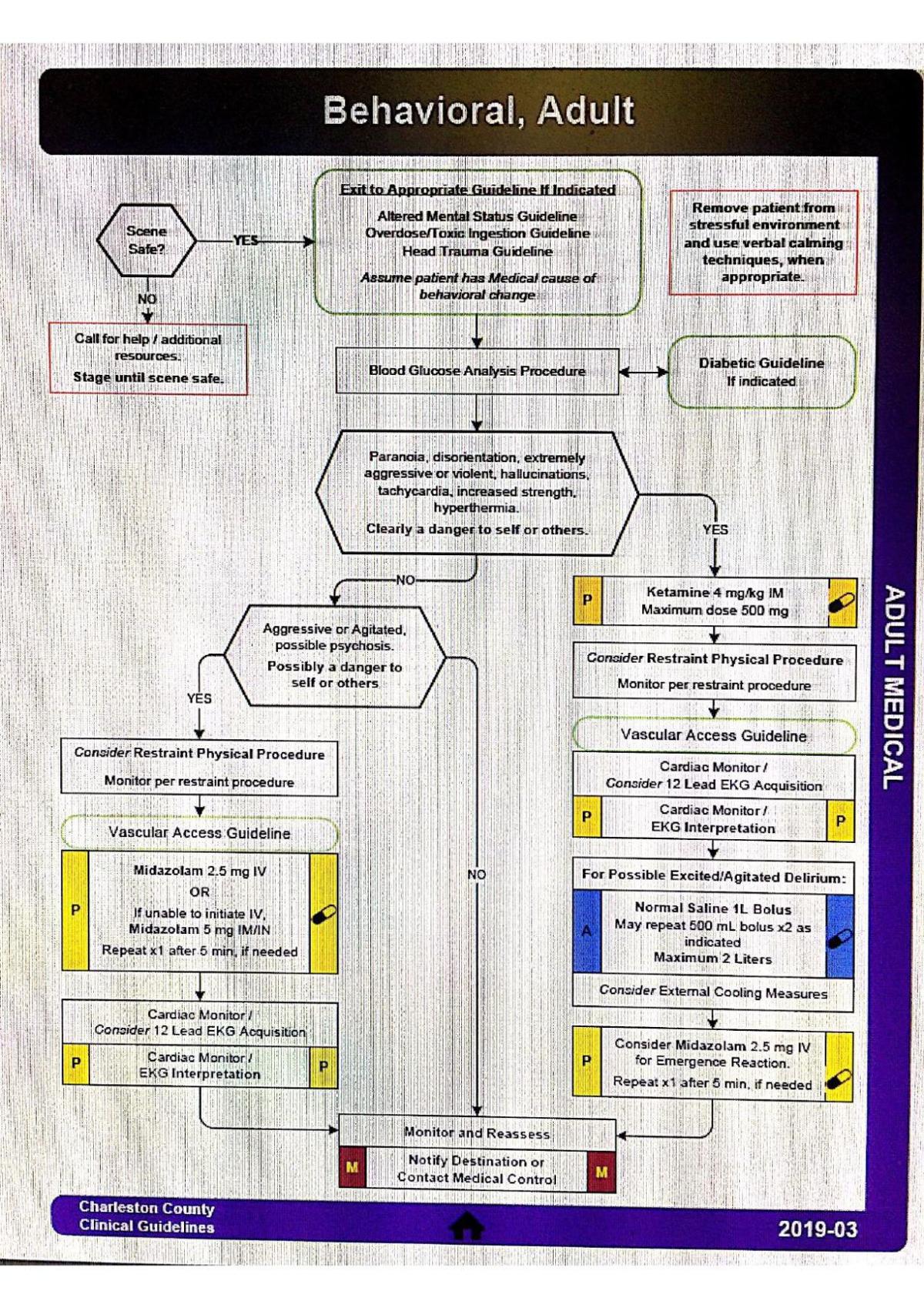 The amount administered to Britt, 500 mg, is listed as the maximum dose under the county's ketamine guidelines.

According to a research abstract published in the journal Prehospital and Disaster Medicine in February 2018, the use of ketamine by emergency medical technicians and paramedics is not very well studied.

The drug's use could be advantageous because of its potent pain relief and sedative properties, and its "favorable risk profile," according to the abstract.

The study's authors received 14,739 responses from personnel across the country. Out of the total, 53 percent reported learning about ketamine during their initial paramedic training and 42 percent reported seeking ketamine-related education on their own, but only 33 percent said they were authorized to use ketamine in the field.

Nevertheless, ketamine "was perceived to be safe and effective" among study respondents.

The study was the first large, national survey of its kind, researchers said. Many paramedics reported being trained on how to use ketamine in the field, but few said they were allowed to administer the drug by their agency.

Out of those authorized to use ketamine, most paramedics said they had limited experience deploying the drug, researchers said.