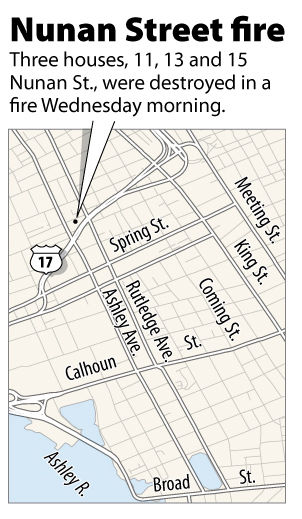 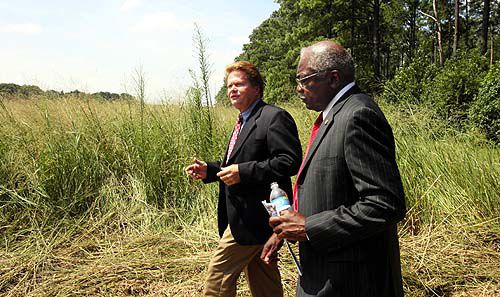 Dr. James Frederick, a professor at Clemson University, explains to U.S. Rep. Jim Clyburn on Aug. 20 how a bio-experimental switch grass field could be used by farmers as a cash crop and also help with climate change issues.

Dr. James Frederick, a professor at Clemson University, explains to U.S. Rep. Jim Clyburn on Aug. 20 how a bio-experimental switch grass field could be used by farmers as a cash crop and also help with climate change issues.

A fire that officials said was of rare proportions for daylight hours destroyed three homes and forced dozens of nearby residents to evacuate Wednesday in downtown Charleston.

No one was thought to have been hurt in the inferno that was reported at 9:55 a.m. at 13 Nunan St., just north of Ashley Avenue and U.S. Highway 17. But by the time firefighters arrived, the house was engulfed. Flames quickly spread to, then consumed neighboring two-story homes at 11 and 15 Nunan.

Nobody lived in two of the homes, said Charleston Fire Department spokesman Mark Ruppel. Three people rent at 11 Nunan St., but they were not home during the blaze.

A fourth home had broken windows and smoke damage. Several cars on the street were damaged or destroyed.

Though Fire Department officials wouldn't rule out that the blaze was the work of the serial arsonist plaguing the downtown area, they pointed out that it didn't fit the usual timing: nighttime hours.

Ruppel said it was unusual, however, for a fire to become so extensive during the daytime.

"Our crews did a fabulous job containing the fire to only those three structures," Ruppel said. "That's a lot of structures; don't get me wrong. But the fire was very heavy."

Area residents said homeless people often were seen squatting at the 1,272-square-foot house where the blaze started, sometimes building fires in the backyard. Investigators had not determined, however, what contributed to the two-alarm fire or where it started.

Some residents of a nearby three-story apartment complex voluntarily evacuated. One was Ruth Tolbert, 57, who said her 8-year-old granddaughter started yelling Wednesday morning.

One of the tenants at 11 Nunan St., Josh Nunez, was working at Medical University of South Carolina when his mother called and told him about the fire that destroyed his belongings.

Nunez, 24, said his American Rottweiler was his greatest concern. But he quickly learned that firefighters had opened the door, allowing the dog to run from the burning building.

Nunez found his dog in a neighbor's backyard; his cat was still missing.

The American Red Cross, which already has distributed aid to 1,162 fire victims this year, planned to help Nunez and his roommates.