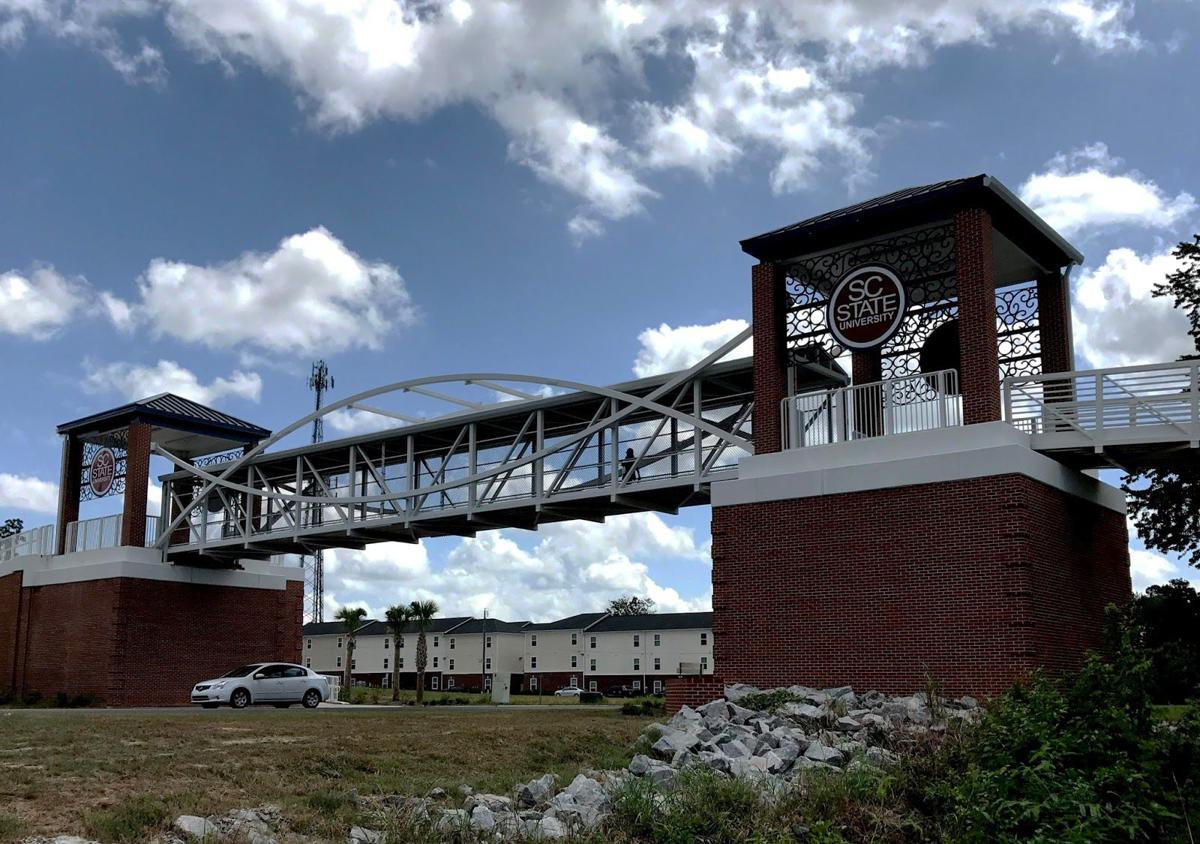 A pedestrian bridge linking the South Carolina State University campus to student housing is named for Emily Clyburn, wife of Congressman James Clyburn. Both are graduates of the college in Orangeburg. File 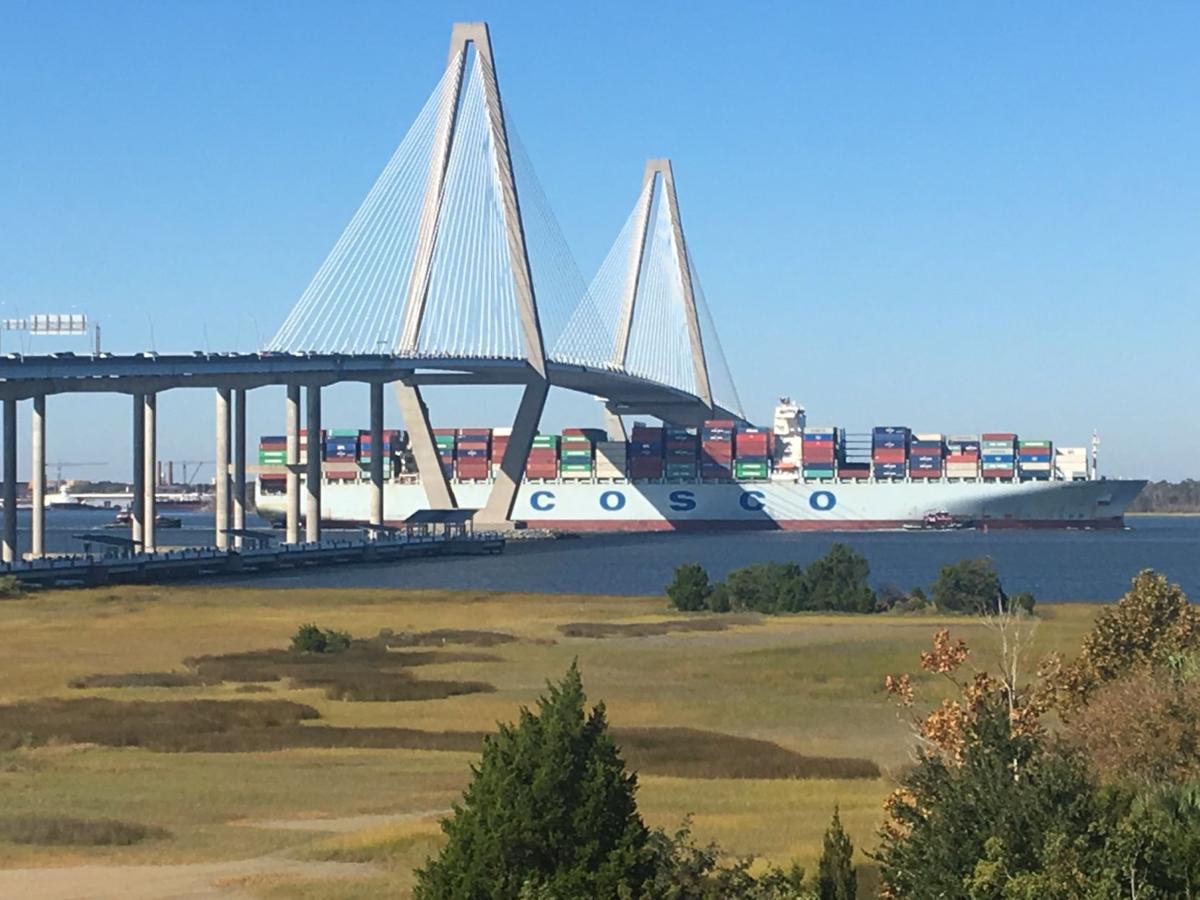 The COSCO Glory container ship, capable of carrying up to 13,200 cargo boxes, clears the Ravenel Bridge on its way to the Wando Welch Terminal in Mount Pleasant on Oct. 29. The bridge is named after Arthur Ravenel Jr., a former state legislator, congressman and school board member. Provided/State Ports Authority

A pedestrian bridge linking the South Carolina State University campus to student housing is named for Emily Clyburn, wife of Congressman James Clyburn. Both are graduates of the college in Orangeburg. File

The COSCO Glory container ship, capable of carrying up to 13,200 cargo boxes, clears the Ravenel Bridge on its way to the Wando Welch Terminal in Mount Pleasant on Oct. 29. The bridge is named after Arthur Ravenel Jr., a former state legislator, congressman and school board member. Provided/State Ports Authority

COLUMBIA — Signs scattered along South Carolina's roadways provide a who's who of politicians past and present — for anyone driving slow enough to notice.

More than 1,000 bridges, interchanges and stretches of highway statewide bear the names of local VIPs, according to a state Department of Transportation tally dating to 1925. Most of those designations occurred in the past few decades.

Unlike in other states, South Carolina lawmakers don't have to wait until people are deceased to memorialize them on a highway.

An effort in 2005 to end the practice — after the namesake of Earle Morris Jr. Highway was convicted of securities fraud — was squashed, though that particular roadway in Anderson and Pickens counties no longer bears the former lieutenant governor's name.

"We cannot forget our history, and part of our history is our present once we memorialize it," House Minority Leather Todd Rutherford, D-Columbia, said. "I don't see us building any more statues, but naming a street after someone is a way to at least remember what they've done, and the local delegation gets to decide who's important to that county."

Under state law, the DOT must be reimbursed for the signage costs.

Last month, a pedestrian bridge in Orangeburg, which links South Carolina State University to student housing over a five-lane road, was named for Emily Clyburn, the wife of U.S. Rep. Jim Clyburn, who secured federal earmarks to fund half the cost. Both graduated from the college.

Some highways have several names.

Outgoing GOP Rep. Bill Crosby lives near the section of U.S. Highways 52 and 78 in North Charleston named after him in 2014 and drives by the signage almost daily.

The lifelong Charleston-area resident said he's grateful for the honor he gets to enjoy while he's alive. As he recalls driving a school bus as a student at North Charleston High — back when that interchange didn't exist — he chuckles at how the sign came to be.

"I was carrying on talking, dating myself" to his legislative colleagues, who decided to recognize his deep ties, said Crosby, who lost his re-election bid this year.

Like his intersection, many honorary highway names aren't found on a map. But other roadways are known by them, such as Rivers Avenue, named in 1948 for then-congressman Mendel Rivers, also known for bringing home federal money. It runs through Crosby's stretch.

The intersection where the Isle of Palms Connector meets the city's main road is named for Rep. Mike Sottile, R-Isle of Palms. He was stunned the first time he saw the marker.

"I was going through the intersection coming home, and there was the sign with my name on it," said Sottile, who was on City Council for 20 years, eight as mayor, before his 2008 election to the state House. "I had to turn around and look. It just looked so strange.

"I'm very proud and very grateful and very humble it was done," he said.

The designation, approved in 2012, was the idea of his deskmate, former Rep. Chip Limehouse, who has his own interchange where Interstate 526 meets U.S. Highway 17 in Mount Pleasant. The Charleston Republican helped create the state agency that borrows money to fund large highway projects, notably the Arthur Ravenel Jr. Bridge over the Cooper River, named in 1999 for the former state legislator and congressman.

The 2009 honor for Limehouse came five decades after a bridge linking West Ashley to Johns Island was named for his great-grandfather. John Limehouse operated a general store and ferried people across the Stono River on the strength of two mules.

He officially had two bridges named for him in the same spot — the first swing bridge and its replacement.

Limehouse hopes the designations cause drivers to look up their South Carolina history.

"I love politics, and I love history," he said. "I love who we are as a people and where we are today. I appreciate all the things people before us did. I think that gets lost in the shuffle."