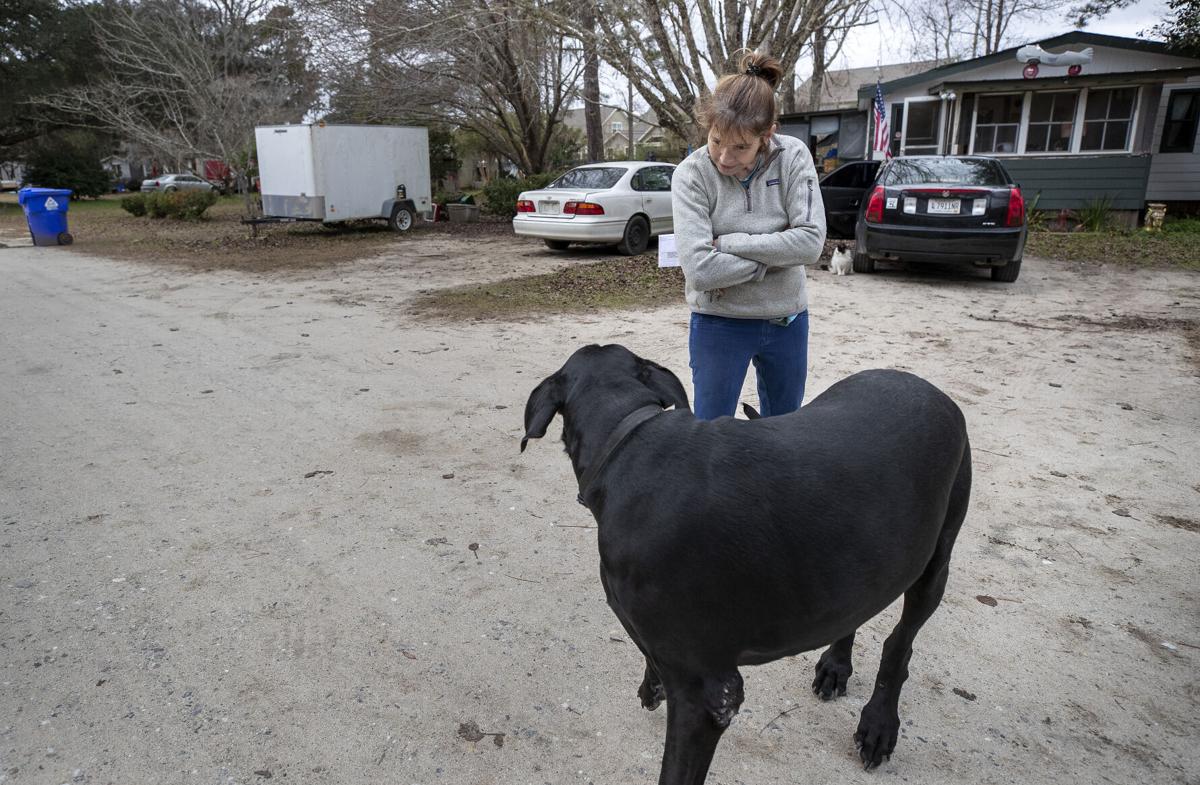 Emily Pelletier, with her Great Dane Midnight, is not sure if her manufactured home is too old to move from Watts Mobile Home Park. She and her husband inherited the home and have lived there for five years. Grace Beahm Alford/Staff 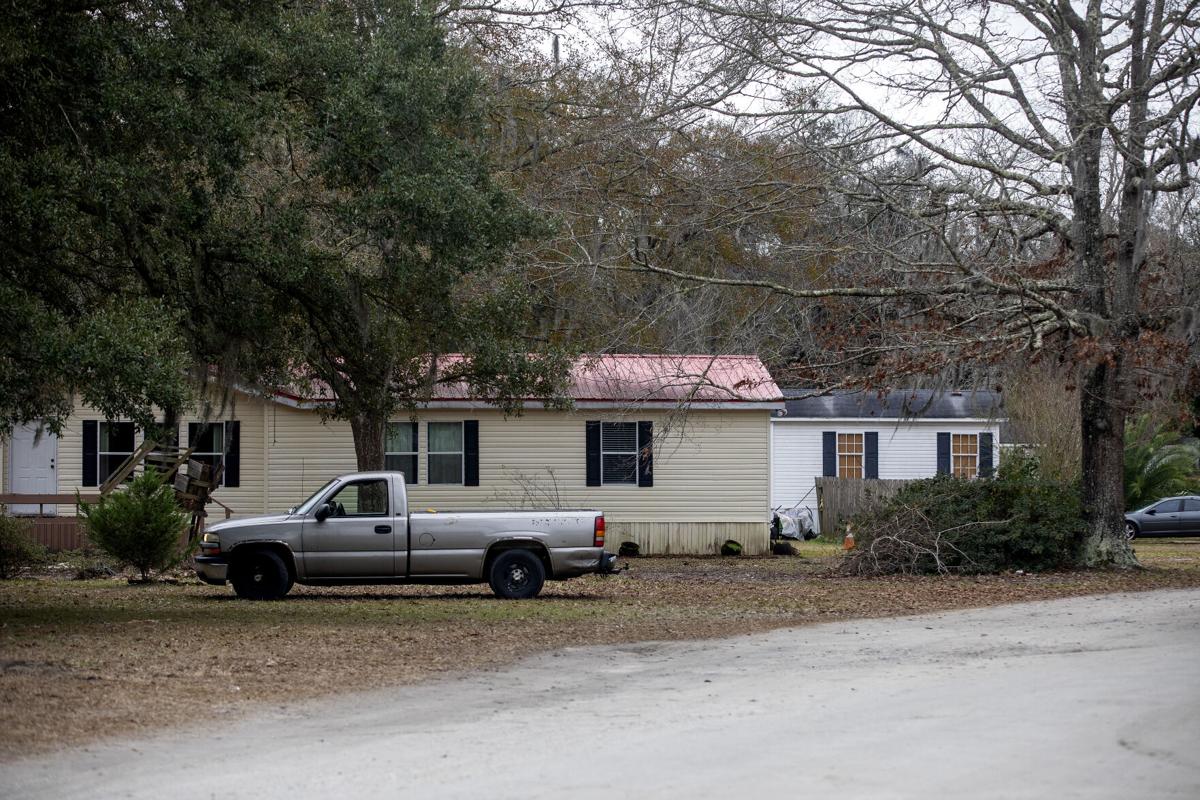 The owners of the Watts Mobile Home Park on Six Mile Road have filed plans to annex into the town of Mount Pleasant. Grace Beahm Alford/Staff 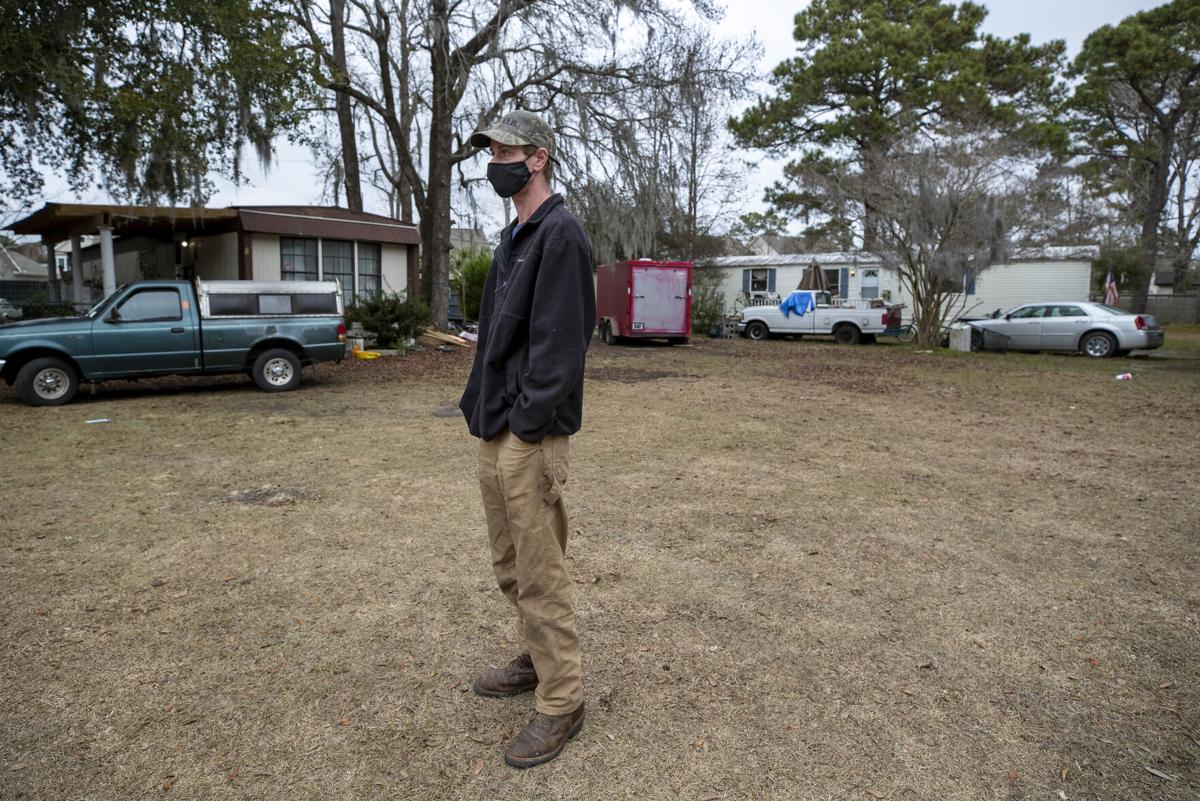 Jacob Worthington bought a manufactured home three years ago and has been living in the Watts Mobile Home Park. The park is closing, moving such a home costs thousands of dollars, and he's not sure what to do. Grace Beahm Alford/Staff 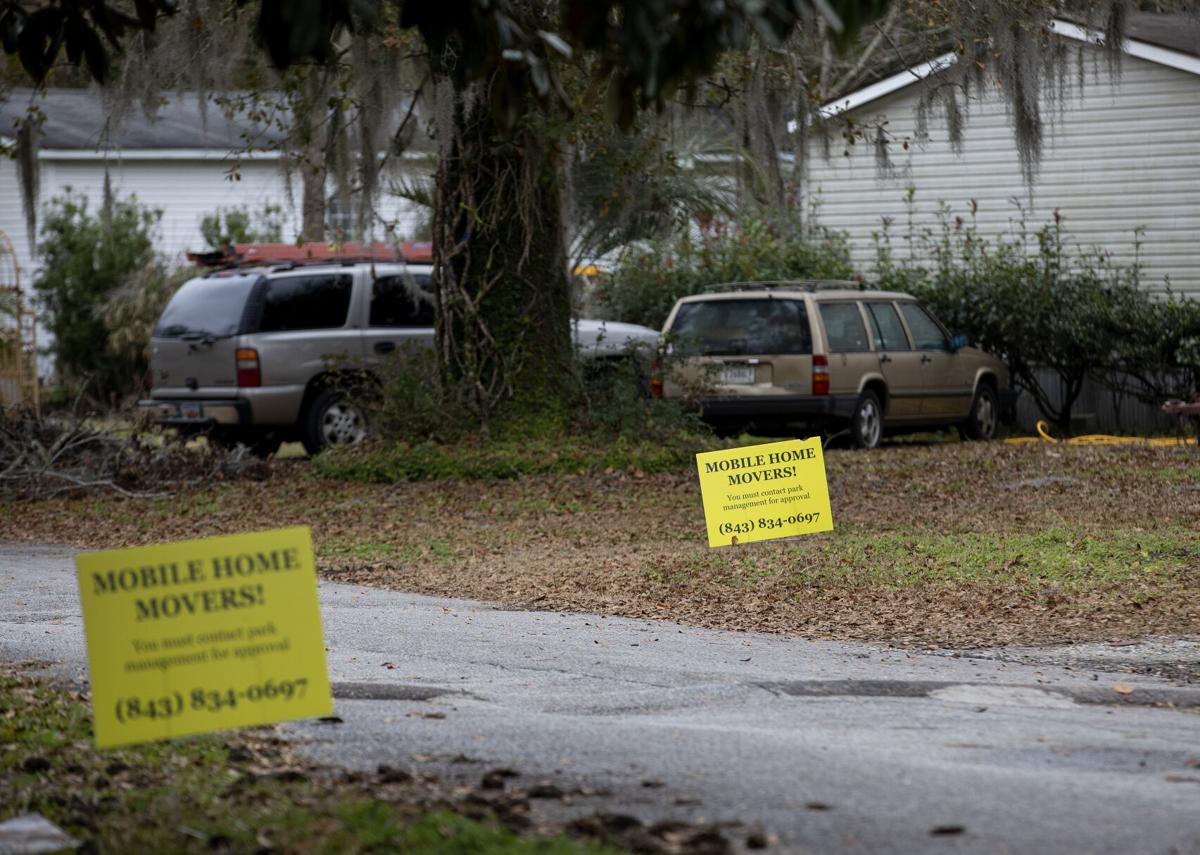 The owners of the Watts Mobile Home Park on Six Mile Road have filed plans to annex into the town of Mount Peasant and redevelop the property as a subdivision. Grace Beahm Alford/Staff 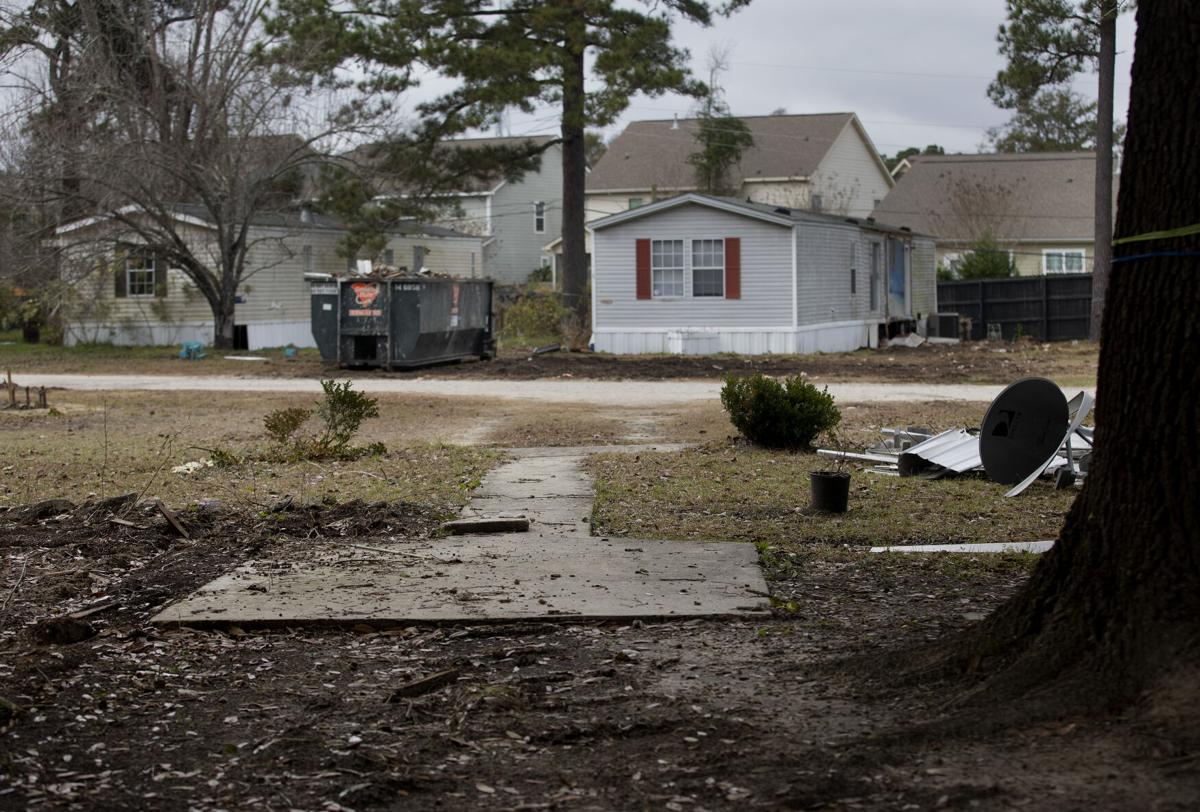 About half of the 30 residents of Watts Mobile Home Park on Six Mile Road have already moved, leaving front sidewalks and patios behind. Grace Beahm Alford/Staff

Emily Pelletier, with her Great Dane Midnight, is not sure if her manufactured home is too old to move from Watts Mobile Home Park. She and her husband inherited the home and have lived there for five years. Grace Beahm Alford/Staff

The owners of the Watts Mobile Home Park on Six Mile Road have filed plans to annex into the town of Mount Pleasant. Grace Beahm Alford/Staff

The owners of the Watts Mobile Home Park on Six Mile Road have filed plans to annex into the town of Mount Peasant and redevelop the property as a subdivision. Grace Beahm Alford/Staff

MOUNT PLEASANT — What may be the last mobile home park in the Mount Pleasant area is about to close, clearing the way for a new subdivision, and some remaining tenants are struggling with the financial peril that comes with owning a home on rented land.

The family-owned Watts Mobile Home Park has existed for about 40 years along Six Mile Road, predating the town's northward expansion.

Now it's surrounded by new subdivisions, and its dirt road where manufactured homes sit beneath live oak and pecan trees will soon become a memory.

"It's kind of like a dagger in my side, really," said Eric Snyder, 41, who has lived at Watts Park for 20 years. "This is just the last piece of reality Mount Pleasant's got."

A larger mobile park at Six Mile Road and U.S. Highway 17 years ago became Six Mile Marketplace shopping center, complete with a Hobby Lobby and a Harris Teeter. The original Laing Middle School was also on Six Mile Road — the site is now a Home Depot — and in the 1980s the Snee Farm subdivision was developed just across Highway 17 from the end of Six Mile Road.

For years Watts Park resisted the tide of development washing over Mount Pleasant and remained a place to live affordably. Tenants typically bought their own modular homes and paid $300 monthly to rent the land.

The problem with such living arrangements comes, as it has at several manufactured home parks in the Charleston area, when the business closes down to clear the land for development. It costs thousands of dollars to relocate a manufactured home. There are limited places to take them. Those who would rather sell than move their home are typically offered pennies on the dollar by investors aware that the owners have few options.

"I don't know what I'm going to do," said Worthington, who said he's been out of work since the pandemic struck in March and can't afford to move the home.

A Feb. 1 move-out deadline is looming. About half of the 30 tenants, who were notified of the deadline over the summer, have already left.

As growth and development expanded through the greater Charleston area, the closure of mobile home parks, particularly in North Charleston, played out repeatedly. The most dramatic was the closure of Trailwood, a park with more than 400 homes near Charleston International Airport, in 2013.

At site of planned North Charleston development, the last mobile home park residents are moving out

The Watts family has owned its mobile home park for two generations and decided to close the business and annex the land into Mount Pleasant "due to the health and personal circumstances of the owners," according to a statement provided in response to written questions.

"The family would like to see the property redeveloped in a way that remains family-friendly and that preserves the Lowcountry atmosphere along the oaks," the Watts family statement said. "Annexation and rezoning would help guide future development."

Park resident Emily Pelletier said the Watts family "have been super nice" and gave residents more than six months' advance notice about the closure of the park, although the tenants are all on month-to-month leases. Still, she said her home is too old to move, so she and her husband and their two rescue dogs are looking for a new place to live.

"We're going to have to move out of Mount Pleasant," she said.

Watts Park isn't actually in Mount Pleasant but rather is surrounded by it. The mobile home park sits in unincorporated Charleston County, and now the owners have asked to have the 11.5-acre property annexed into the town and rezoned for single-family homes.

The initial request was denied, partly because a high-density zoning was requested that would allow for houses on lots as small as 4,000 square feet.

“Of course, a big issue there was, what happens to the residents there," said Jeff Ulma, Mount Pleasant's planning director. "There were lots of concerns about displacement.

The park off Six Mile Road is scheduled to close Feb. 1. The owners have applied to have the 11.5-acre properties annexed into Mount Pleasant and zoned for single-family homes.

“It’s private property, so it’s the owner’s decision what to do with it," he said. "It’s like when a developer decides to redevelop a shopping center where there are tenants with leases."

A revised annexation and zoning request, calling for minimum 8,000-square-foot lots — about five houses per acre — goes before the town's Planning Commission on Wednesday.

Those seeking to develop property in the East Cooper area typically need to annex into Mount Pleasant in order to get water and sewer service to serve the new homes or businesses. Watts Park uses septic systems.

Number of factory-built homes shipped to SC has doubled, so have complaints

"Once the tenants are relocated and annexation and rezoning are approved, the owners will consider selling the land in the future," the Watts family said.

Snyder said it's been a nice, quiet place to live, and his 14-year-old daughter has grown up there with him and his wife. Now, with Feb. 1 looming, they are rushing to finalize plans to leave.