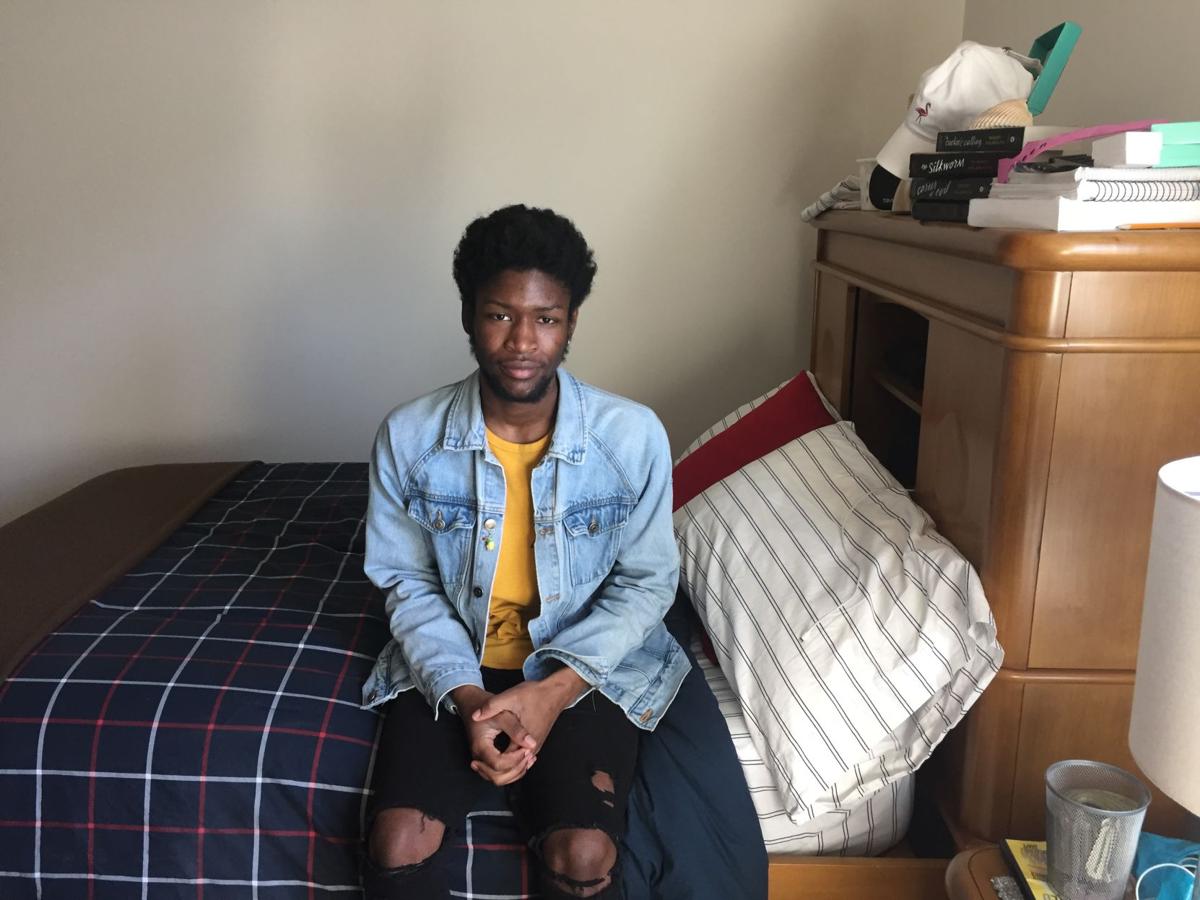 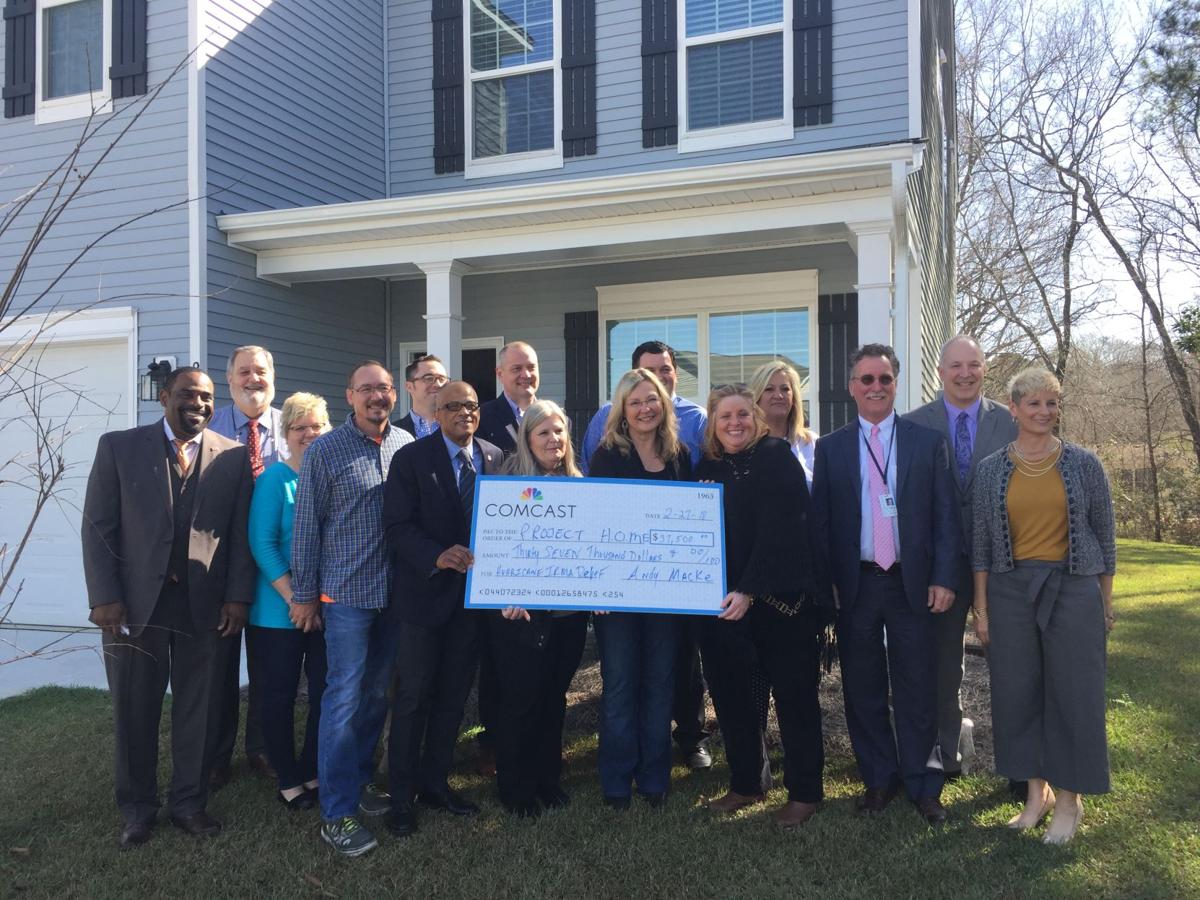 Brandon Hampton was 17 and homeless after his mother kicked him out of the house in November.

Their relationship had always been "shaky," as he puts it, but tensions came to a head over Thanksgiving break.

Before he could return to school, Hampton had to explain to his favorite English teacher why he wouldn't be wearing his school uniform.

But it wasn't fine.

Hampton, a senior at R.B. Stall High School, did not have a safe, long-term place to stay. So the week after Thanksgiving, he moved into Mickey's House in North Charleston, a home for teenage boys in the Charleston County School District who need a roof over their heads, food to eat and a little adult supervision.

Two stories tall and painted cornflower blue, Mickey's House opened its doors to its first resident, a student at Wando High School who had been sleeping his car, at the beginning of this school year.

On Tuesday morning, representatives from Comcast presented the nonprofit that runs Mickey's House with a $37,000 check that will help cover food and utility bills at the home.

Mickey's House is the brainchild of Kim Wilson. He is a former principal of R.B. Stall, a Title I school in North Charleston, where nearly three-fourths of the students are impoverished, according to state education data.

The idea came to him two years ago when a teacher emailed him an article about a school district in Maplewood, Mo., that had opened a home for displaced and struggling students called "Joe's Place."

Wilson studied his own school's data. He had 17 students, most of them boys, considered homeless under the federal government's McKinney-Vento Homeless Assistance Act. These students were couch-surfing at friends' homes, sleeping in their cars or living at motels, shelters and campgrounds.

Wilson personally knew one student, a senior, who was displaced after his mother died from cancer. Although he wound up sleeping on different people's couches, his story had a happy ending: He graduated with a full scholarship to Duke University.

"Some of them aren’t successful," Wilson noted. "Some of them drop of out of school and live on the street. This gets them out of that vicious cycle."

The Charleston County School District has 340 homeless students, less than 1 percent of its student population. Sixty-four percent of these students are zoned for schools in North Charleston, according to district data.

Studies show youth homelessness leads to an array of problems. Older homeless students, for example, are more likely to drop out of school and engage in risky behavior, including drug use and so-called "survival sex," which is defined as exchanging one's body for basic subsistence needs, including clothing, food and shelter. They're also prime targets for crime and exploitation.

Those who stay in school are at risk of falling behind academically without a quiet place to study or access to books, school supplies and computers.

Wilson pitched the idea for a community-run shelter for homeless teens to Angela Henderson, a volunteer at Stall and pastor at North Palm Community Church in North Charleston.

They worked together to launch the nonprofit Project H.O.M.E. Within 18 months, it had raised enough money — from Stall alumni, local businesses and patrons like InterTech Group CEO Anita Zucker — to buy a new $257,000 house at the end of a cul-de-sac on one of Stall's bus routes.

The house is named after Wilson's mother-in-law, Mary "Mickey" Welch, a retired businesswoman from West Virginia whose donation allowed Project H.O.M.E to pay for the house in full with no mortgage.

The "house parents" are Lisa and David Carey, former youth ministers and members of North Palm Community Church. They already raised their own adult son and were ready to take on the challenge again.

"We run it like our own home," Lisa Carey said. She and her husband make sure the boys are up in the mornings in time to catch the bus to Stall or make the drive to Wando. They check the boys' grades and ask them to do their homework. Curfew is 11 p.m. on weeknights, midnight on the weekends. They eat dinner together, have movie nights and text each other throughout the day.

Getting to know — and trust — one another was hard in the beginning, Lisa Carey said. The boys spent a lot of time in their rooms. Now, they're like any other family.

"It's fun to see that they're trusting us; we're trusting them," Lisa Carey said. "It's hard, but it's a blessing."

Wilson, who now oversees all of CCSD's high schools as executive director of the district's Secondary Learning Community, hopes to open another home for homeless girls, elsewhere in the county. Homes like Mickey's House, he said, could even be replicated across the country.

"Why wouldn't this be something we could do nationwide?" Wilson said. "It seems to me there’s a need for this kind of thing."

In the meantime, Hampton, an honors and Advanced Placement student, is focused on keeping his grades up, re-building his relationship with his mother and getting ready for prom.

He already has rented a black tuxedo, with long tails and a gold cummerbund in keeping with the dance's "Great Gatsby" theme. An aspiring nurse, Hampton is still waiting to hear from the four colleges he applied to, including one in Oklahoma.

But the College of Charleston, Lisa Carey's and her son's alma mater, is his No. 1 choice. Following in their footsteps, Hampton said, would just be "family tradition."