COLUMBIA — Gov. Henry McMaster's lobbying for former West Point superintendent Bob Caslen did not influence the University of South Carolina trustees in electing the retired three-star general as president this month, the college's board chairman wrote to concerned accreditors. 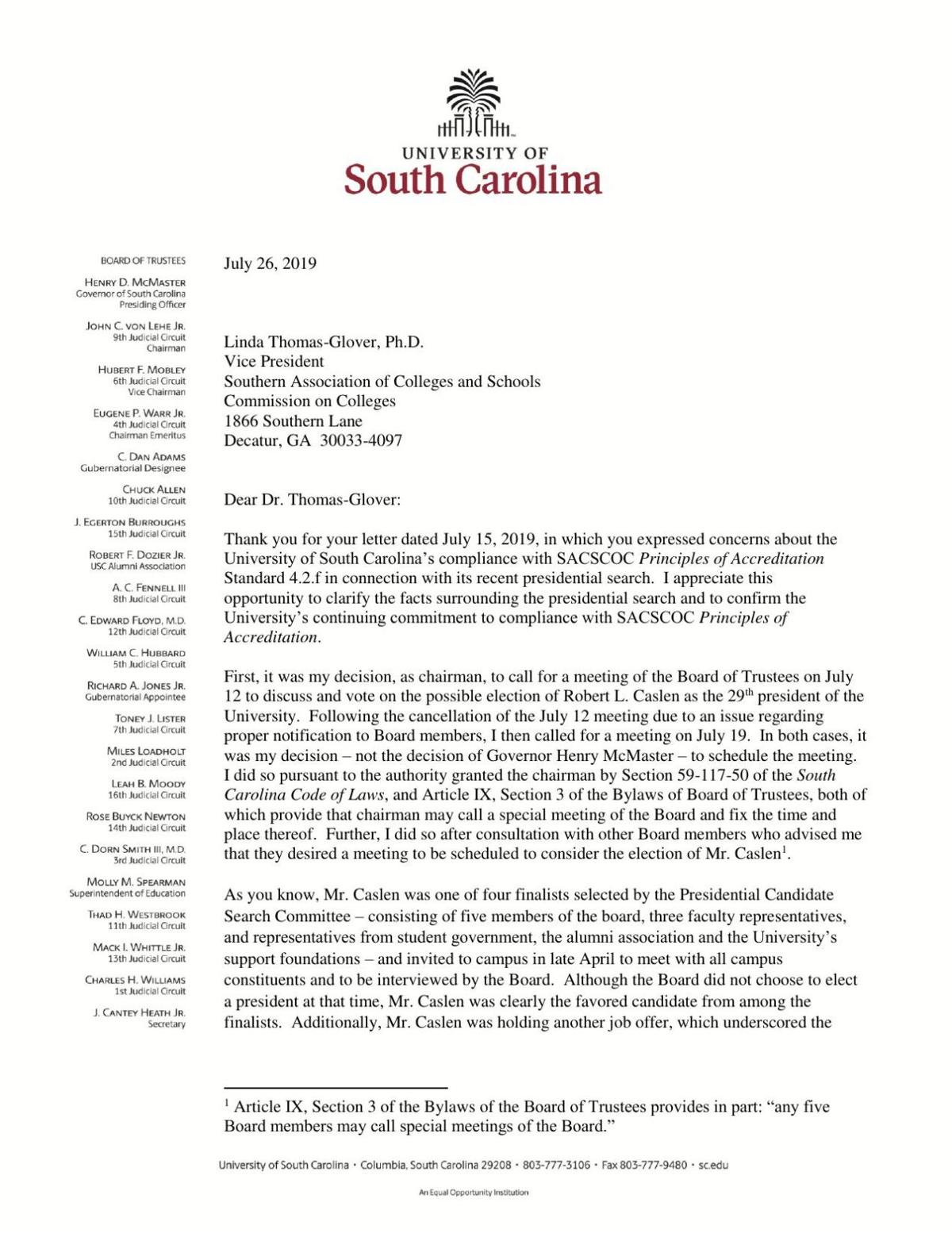 Instead, the board needed to move quickly because Caslen had another job offer, USC board Chairman John von Lehe wrote to the Southern Association of Colleges and Schools Commission on Colleges.

"I am not aware of Governor McMaster’s support of Mr. Caslen — which he has the right to express — affecting the vote of the Board," von Lehe wrote.

Accreditors expressed concerns about political influence in choosing a new president at USC and asked university leaders to explain McMaster's role in pushing for a vote for Caslen. Losing accreditation can severely damage colleges because they can't provide federal student financial aid.

McMaster is ex-officio chairman of the USC board, according to state law, but he appoints a designee in his place. The governor called trustees during July Fourth week to push for a vote on Caslen, who had generated campus and alumni protests over his qualifications and comments he made during public forums.

Caslen had the votes to become president in April when four presidential finalists came to Columbia, but the trustees balked to avoid hiring a president by a split vote.

After conversation among trustees following McMaster's calls, von Lehe said he decided to hold the vote on Caslen in July.

"(I)t was my decision — not the decision of Governor Henry McMaster — to schedule the meeting," von Lehe wrote. "I did so after consultation with other Board members who advised me that they desired a meeting to be scheduled to consider the election of Mr. Caslen."

Christian Anderson, president of USC's chapter of the American Association of University Professors, said that while McMaster did not call the meeting, his conversations with trustees appeared to be the chief influence in the board taking a vote three months after deciding to continue the search.

"If McMaster said nothing, I think they would have proceeded with a search in the fall. His calls, that's what pushed this over the edge," Anderson said.

In an interview, von Lehe said he learned about Caslen's job offer about the same time McMaster was calling trustees. Caslen said he was offered a full-time position as executive board chair at DeVry University, a for-profit college.

Von Lehe wrote accreditors, "I simply felt that the Board should have the opportunity to vote, either for or against him, and this opportunity would be eliminated if the Board delayed action on his candidacy further."

Caslen was hired on July 19 by a vote of 11-8. He starts at USC on Thursday, succeeding Harris Pastides, who is retiring after 11 years of leading South Carolina's largest college.

"Mr. Caslen was the favored candidate in April — prior to the Board receiving any communications from Governor McMaster — and majority of the Board continued to support and ultimately vote for Mr. Caslen’s election on July 19," von Lehe wrote.

He added, "It remains my view that each member of the Board voted for or against Mr. Caslen based solely on their independent judgment of Mr. Caslen’s qualifications to lead the University of South Carolina or their satisfaction or dissatisfaction with the search process."

In the aftermath of the vote, the USC board and Caslen plan to hire a consultant to examine how the school is governed, von Lehe wrote to accreditors.

The retired Army general does not have a doctorate degree or research pedigree of other major university president. He made comments while on campus that some took to blame victims for sexual assault. The presidential search caused immediate controversy because no women were among the finalists.

Some protesters say now they will allow Caslen time to show what he can do in office. Caslen was appealing to trustees as a nontraditional college leader who could control costs and keep down tuition hikes.

Caslen has met with student, faculty and alumni groups and pledged to make USC a "preeminent" college in the nation with a focus on improving academics to attract top-tier students and professors. He also plans to boost research by working with major corporations and military bases in the state.